I'm not sure you could call what we have this week a "plot," per se; it's more a loose series of semi-related non-events. Cliff is having a barbecue even though it's in the low 30s outside. The family is having Dr. Foster over for dinner. Denise is home from college for a visit (despite it being neither Thanksgiving nor Christmas). Theo and Cockroach are having trouble with their homework on Julius Caesar. Rudy has written a fairy tale. Russell stops by with a friend of his, another professor. Everyone joins in the living room to eat dinner and recite monologues. 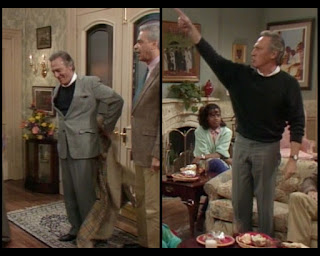 Columbia? The man is a genius! Why not write that he teaches at Tisch?

Russell's dinner companion, Jonathan Lawrence, is played by Christopher Plummer. You've known who he is since you saw him as Captain von Trapp in The Sound of Music, and he's been consistently fabulous since then. He's still churning out top-notch work, too: he won an Oscar last year for his role in Beginners. Legendary though he may be, he's no fashion plate in this incarnation. I'm not sure if you can really tell from that first shot, but he's not actually wearing a gray suit, but rather pants and a jacket that sort of match: the blazer is textured while the slacks are not. Beyond the usual broadness of fit, I find this error to be particularly grating. It's so boring to just find two things that are the same color and throw them together. If they don't match anyway, then couldn't you just find complementary items and wear those instead? Especially if the rest of your outfit is a plain black sweater and a plain whit polo underneath, don't go with two gray pieces on top. I'm bored to death. 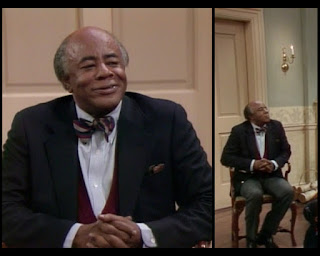 He reminds me of a toad for some reason.

Dr. Foster knows what I'm talking about. He's not exactly walking the runway for Gaultier, but at least he's introduced some maroon and navy into the mix. His presentation is crisp but slightly dynamic, with the striped bow tie adding a hint of whimsy. It's not a huge risk, but it makes a difference. And the fact that it matches his vest and blazer lets you know that he thought about how his pieces coordinate rather than simply grabbing a bunch of random formal wear and landing on the goofy tie accidentally. 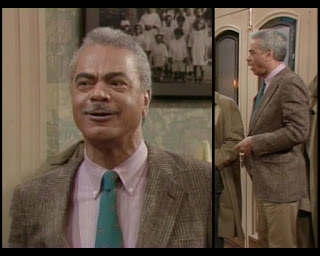 This man, on the other hand, is clearly a Panthro.

I was initially sure that Russell was wearing the same jacket he wore during Dr. Foster's first appearance on the show, but this is a different (though similar) garment. It's nice to see new looks from Grandpa Huxtable, since he seems to be the character most likely to be thrown a repeat. Which is a shame, because he's typically serving up some style. Tonight is no exception: the mild pink of his shirt is a flawless match to his subtly patterned jade tie. While I might have urged him toward darker pants, I'm overall pleased with this look. 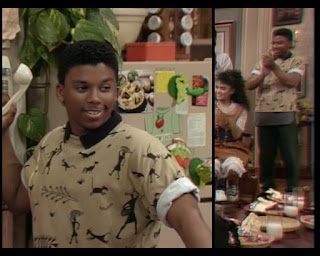 No animal joke need be made. He's a Cockroach!

Cockroach tries to fool us by mixing in a collar, but we know better: that's a sweatshirt, and sweatshirts are lazy and we don't like them. Even when they're in a nice, soft sandstone shade and have admittedly interesting cave paintings on them. Sure, the forest green pants are unique, and their droopy fit mimics the drop-crotch craze that's currently making the rounds, but still, you're basically a schlub who didn't even tuck in his shirt. There are good moments here, but we're overall not in a stellar situation. 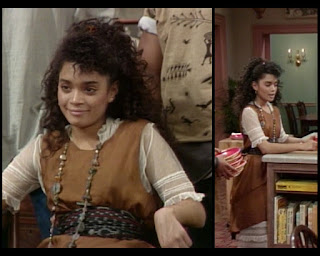 Girl, you got me singing Klymaxx.

Thank goodness Denise is here. She never fails to bring it. If she were younger, Clair would no doubt berate her for the inappropriateness of that gauzy first layer for such cold weather, but as a college student, this lady can do what she wants. I'm impressed with the delicate, ruffled white garment, which subtly incorporates both flirtiness and formality into the ensemble. The brown dress on top wouldn't be much on its own (though that diagonal hem and parallel seaming on the skirt are eye-catching), but she's accessorized it with that wonderful rustic woven belt and the big jangly necklace from the season 3 finale and that barely-there translucent number, and basically she wins at everything again, as usual. I cannot get enough of her. 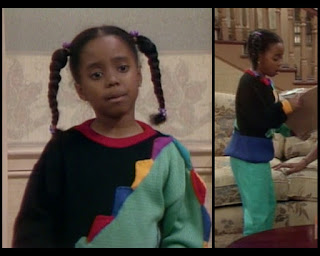 Rudy has brought back her stegosaurus sweater from two weeks ago, hopefully implying that she enjoys it almost as much as the summer dress that her mother made her lock up for the next several months. Continuing the trend of highlighting the teal element of this top, she's gone for matching pants. Not bad. 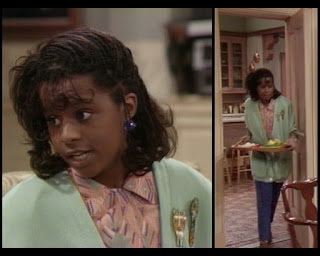 Her hair is like a map of hurricane winds.

While prints are very much still in the mix, Vanessa's real focus seems to be palette. Looking back over her outfits, she has a growing affinity for assertive hues, while neutrals are getting less and less attention. Good for her! I wouldn't say that I'm a fan of this creation, but I appreciate the thought that went into it: the pink shirt's pattern reflects the light sea foam of her cardigan and the indigo of her pants and earrings, creating a cohesive offering. There's also something rather modern about the low-waisted sweater and high-necked blouse. (I was going to say "buttoned top button," but there don't actually appear to be fasteners anywhere on the front of that top.) She's also big on accessories lately, with those bizarre little pins serving as the latest example in the trend. Again, I don't love them, but at least she's trying. 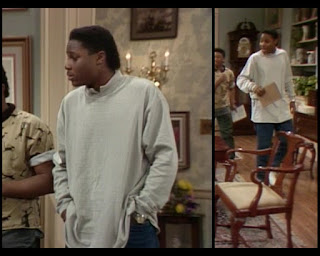 Do you hear me, Theo? AT LEAST SHE'S TRYING. This, I can't even talk about. 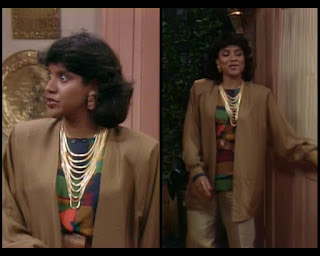 As much as it pains me to say it: also no.

I suppose I have to allow Clair her occasional misfires. We all have them. Still, I'm sad to report that I enjoy basically nothing about what she's wearing today. By pairing extreme shoulder pads with a thin fabric in a bland color, she becomes entirely featureless. She might as well be wearing a cardboard box. While her top has some jewel tones, they're too scattered to make an impact, so the neutrals in the blouse and the khaki pants and the coat all merge to just be like: BLEH. Sad and dirt-colored. She almost brings it back around with that necklace, but it hangs funny and seems to melt into itself, diminishing its impact. Also, it draws attention to those two lost, purposeless buttons at her neckline. Today is not her day. 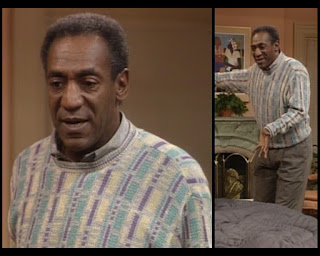 This latest sweater from Cliff is pretty light in terms of its threat level. Sure, it's presenting a slight challenge to your notion of vertical stripes with all those horizontal interrupts, but its pastel colors all fit plausibly together. Nothing about this garment makes me wonder what kind of drugs you'd have to be on to design it. And he pairs it with grays, making my job pretty easy. Standard outfit. Slow news day all around. 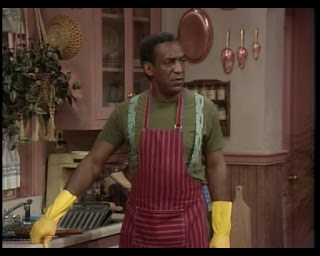 I should point out that he feels the need to change clothes before doing the dishes. Maybe the t-shirt and suspenders were under the sweater and collared shirt all along? I guess he'd need to do a lot of layering since he was standing outside in the cold all night.

And there you have it, a very special Christmastime edition of Huxtable Hotness. (Actually, there's nothing even vaguely holiday-related in this post except for the date. Whatevs.)
Posted by Unknown at 8:00 AM