This episode, for me at least, drove home how unrelatable the Huxtable clan can be. Most of the story involves Cliff's effort to find a drill that he borrowed months ago from a friend. When unable to locate the item, we're treated to several anecdotes explaining how poorly people react when they can't have the things they want. I understand that it's frustrating when someone borrows something and doesn't return it, but do people really throw tantrums whenever it happens? It's just stuff, guys. I don't want to hear about how Clair ran over tupperware with her car in a fit of rage. I mean, I don't own a car OR tupperware. Oh, and to keep the kids involved, there's a Halloween subplot about making a haunted house in the basement, but it's clear that no one cares about that. 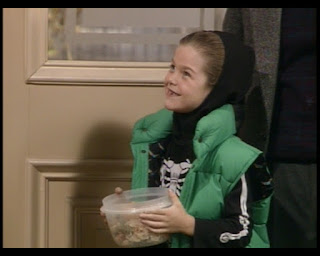 I'd totally be the kid at the party eating the pasta from the "brains" bowl.

Rudy's friend Beth is back, but since she's already in a costume, there's no need to say anything specific about her wardrobe. I just think she's adorbs, especially because her name is Penni Penniman. It's probably a stage name given to her by a stage parent, but whatever. 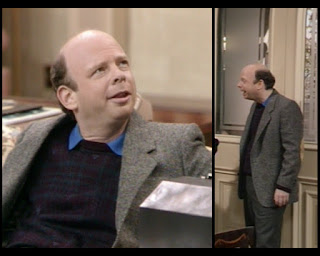 Something something land war is Asia.

Beth's dad Jeffrey is played by Wallace Shawn, who has never not been small and weird and basement-y. I guess it makes sense that Cliff would be friends with a lot of oddballs, given that he's rather eccentric himself. Older men on the show tend to keep it a little formal, and this man is no exception: his gray slacks and heathered suit coat reek of middle management at a boring office. He's at least giving us a little pizzazz in the collar, which is direly needed since the pattern on his sweater is so dark that it might as well not exist. Overall, the outfit lacks enough color or sparkle to catch the eye. (Metaphorical sparkle, by the way: I'm not suggesting that he literally don sequins and glitter.) 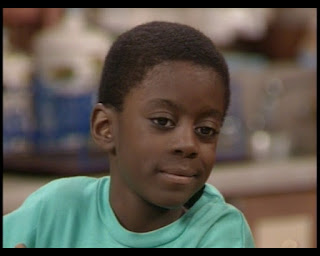 Kenny shows up for a while in the kitchen, but he spends the entire time hiding behind the island, so all we know for sure is that he's wearing a teal shirt. 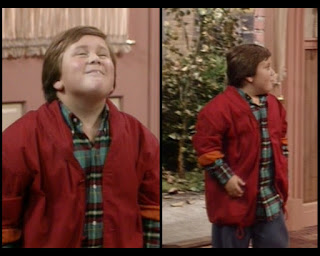 Peter visits the haunted house so he can continue his running gag of running out the front door. He's still in sweatpants, which makes me none too keen to spend time reviewing his outfit. I give him props for complementing his jacket with a plaid that has some red in it, but am less in favor of his choice to roll the sleeves of his outerwear. It's a windbreaker, not a blazer. Let's not get too fancy. 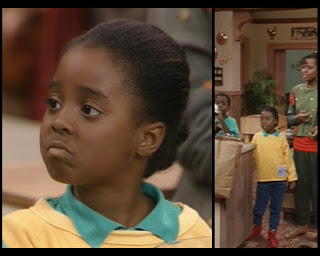 She's giving you Grumpy Cat. You can't handle it. 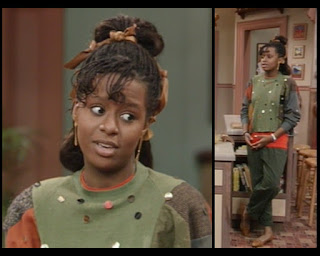 OK, now we're getting to the real deal. There's only so much fashion review you can do for kids in the single digits, but Vanessa is totally fair game. In terms of palette, she's winning me over: the olives, browns, and slate blues accented by a couple bursts of brighter orange create a dynamic color story. On the other hand, she's got way too much going on with that top. If you're going to go with blocking on the sleeves, maybe don't also do the bubble pattern across the torso. Honestly, maybe just don't ever do the bubble pattern. She's showing potential, at least, and I really hope she finds her groove soon. 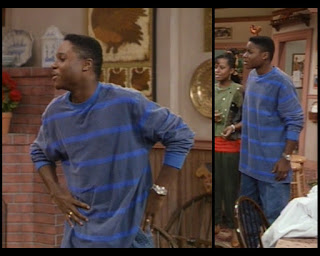 Seriously, we need Denise back.

When will Theo get rid of those jeans with the front seam? Oh, and this shirt is boring. (I suppose I should mention that all of the children also had Halloween costumes this week, but they generally didn't seem worth including. The one point of interest was that Theo chose to don a curly wig and portray Blacula instead of Dracula.) 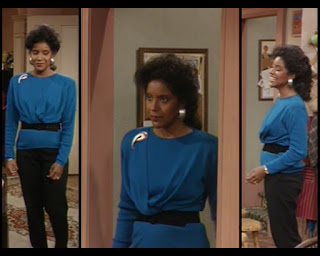 Never not the best.

Finally, someone comes through for me. This azure sweater set is stupendous, and the simplicity of her look is elegant rather than underwhelming. From the side, the shape is a little awkward, so she might want to work on belt placement or think harder about where thinks are draping versus where they're cinching, but for the most part I think we've got a winner on our hands. Clean and classic carries the day. 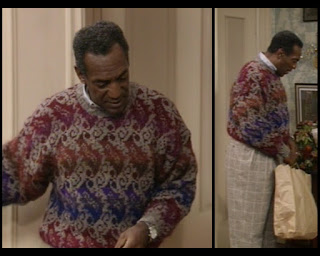 He's going out for Halloween as a way fatter version of himself.

This week's sweater brings the crazy by making its pattern intricate and weird, using structure to create chaos in a paradoxical manner that only heightens its mind-bending power. The leafy knit is pointy and wriggly in a manner that also suggests a gross bug, and the ever-shifting hues impede depth perception, making the body seem to ripple unnaturally. Cliff is truly a mad scientist. I can get behind the light plaid on the trousers, but they're so huge! HUGE! There's no way he's actually as big as this getup makes him look.

Well, this was a short one. That's probably a relief for all involved, though. You never know; maybe they'll all have lots of fabulous options next week. The end!
Posted by Unknown at 8:00 AM