I'm usually in love with stories focused on what the Huxtables are wearing, because they take this blog to a very meta place. Today's plot, however, is about Rudy's clothing, which sort of limits me, because she's still only eight years old. Specifically, she's sad and angry that she can't wear her favorite summer dress to a party because it is now fall and thus too cold. The whole argument makes Clair seem a touch imperious and rigid. Does her daughter not own tights and a cardigan? Could we not accessorize this dress to make it appropriately warm? Going all "my way or the highway" seems unnecessary. Elsewhere in the house, Cliff is waiting for the garbage truck to take away his broken water heater (yep, that's counting as an entire subplot) while Vanessa's old flame Robert is back to lament once more about his failing love life. 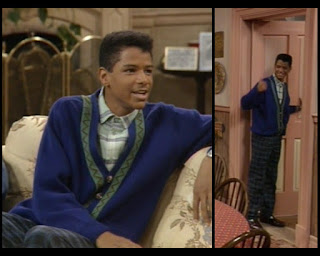 No, it's not Russell, though I understand why you'd think that.

As a performer, Dondre Whitfield is really growing on me. His earnestness comes across as so genuine. It's not that Robert isn't annoying, because he is; it's that he's not some Urkel caricature of a pest. I believe him. The outfit, however, is pushing a little too hard. The gimmick with Robert is that he talks and acts like an old man, but suddenly this season he also dresses like one. The loafers, plaid pants, and cardigan don't read like what a teenager would wear. Maybe he's going through a weird stylistic phase, but I mostly think the wardrobe choices here are overkill. We get it. Truthfully, the look itself is assertive and has potential: he's mixing plaids, but he uses the sweater to divide them and thus prevent disaster, and the limited application of only greens and blues helps unite the disparate parts. If the palette and fit were updated, he could rock these threads in a modern context. If the outfit had been worn by another character, I'd probably be thrilled with it; I just dislike its lack of subtlety in highlighting his main gimmick. 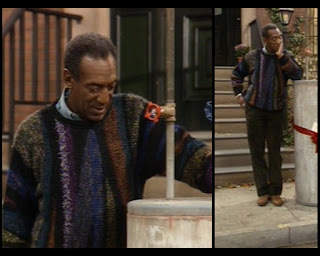 Filling the Denise void with appliances.

I told you the old water heater was a whole plot line. Anyhow, Cliff has gone deeper into the sweater-made-of-sweaters field by presenting individual stripes made of multiple colors. The garment dares us to question its coherence. How do its individual atoms maintain their bonds? That orange band is made of scattered red and ocher yarn! The purple part is fuzzy like shag carpet! The overall verticality of the patterns is a mere suggestion, with each piece swaying  like bamboo in the wind! This must have been really hard to knit. It pairs solidly with brown pants, though since the base of the sweater is black and there's no brown to be found in it, I might have urged him toward navy or olive or gray. With everything else being relatively dark, I commend the choice of a bright robin's egg shirt collar. 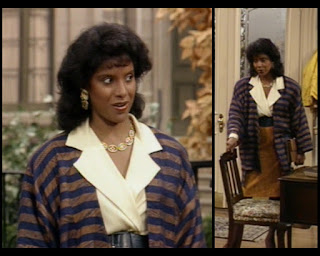 Overdressed and I don't even care.

Clair last wore this jacket (also with this necklace) in episode #2.25. It works even better with this outfit underneath it. The red shirt from last time didn't make as much sense. Here, she's working with the tones already present in the garment, highlighting the orange undertones with her goldenrod skirt and using the crisp cream collar to anchor it all. Once the coat comes off, I'm thinking that big belt is going to look a little high, but I'll allow for the possibility that some sexy secretary tailoring is at play. The wide collar on this is my favorite: if you're wearing one large garment, then why not just go big on everything? Collar, belt, hair, the whole shebang. 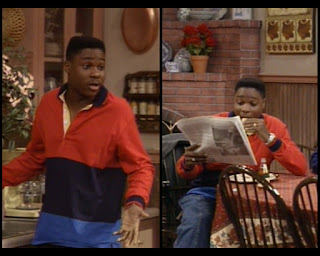 I don't even care, but for entirely different reasons.

Ever a disappointment, Theo repeats his episode #3.18 shirt with his horrible front-seam jeans. 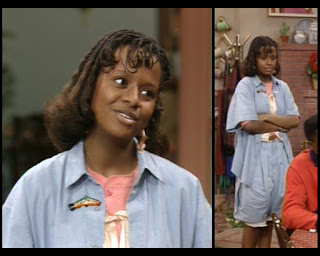 Something to carp about. (Probably the site's first fish pun.)

There are a few things happening with Vanessa's mostly denim configuration here that I don't outright comprehend. For instance, the shorts are way more voluminous than they need to be, and she's apparently actively encouraging that breadth with some sort of under-short filler (as indicated by the flash of white peeking out at the bottom). Then there's that ivory middle layer with the twisty fastening, which I'd love to see on its own because I can't get a clear mental picture of it. Overall, she's at least giving it the old college try, but her experimental foray into unconventional silhouettes and layering hasn't really paid off. Also: her pin and earrings are fish. Why is that? 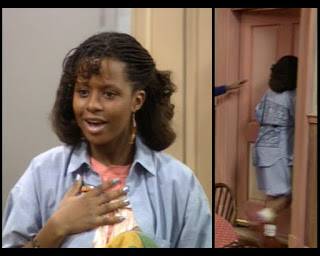 A couple extra details to catch. First, the nail polish, which matches her outfit. She's really committed to asserting this periwinkle as her main theme. Second, the entire back of her shirt is covered with black detailing that we never get a good look at. It's somewhat geometric, but it could be anything. Also: sock problem. 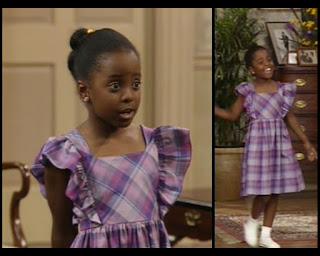 It's an OK dress, but I don't know that I'd call it a favorite.

This dress, Rudy's favorite, has been altered since we last saw it. In episode #3.24, it had a much higher neck, which has since been brought down to help it appear seasonally inappropriate. I still feel like she could throw a turtleneck under it and call it a day, but that's just me. 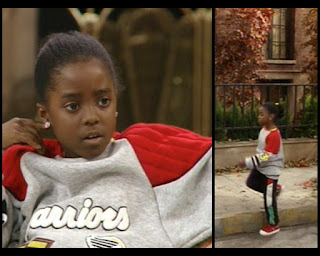 I wear sweatsuits when I'm depressed too. Just kidding. I don't own sweatsuits!

She spends the rest of the afternoon in this warm, busy, colorful sweatsuit. There's not much to say about it, but I have several pictures of her in the getup because we have to talk about the scene midway through the episode in which she walks around her room trying not to cry about her dress while "It's Not Easy Being Green" plays. It's an uncomfortably long (and just plain uncomfortable) display. Some highlights: 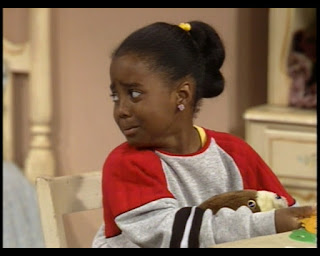 Rudy tries to play Go Fish by herself. It cannot make her forget. 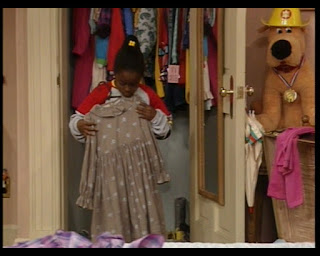 "No one will respect me in this disaster!"

She looks at one of her fall dresses. I agree: it's not great. 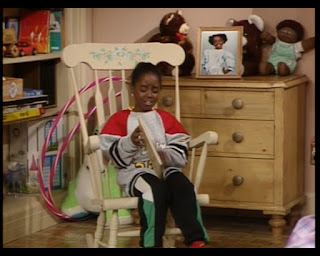 She is going through it. 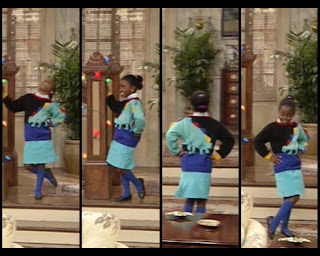 Put the bass in your walk.

Eventually, Cliff helps Rudy pick out her own outfit from the fall clothes in her wardrobe and then encourages her to put on a little fashion show for her family. It's totes adorbs, and you can't really argue with the stegosaurus sweater with spines running down the sleeve. That's just good design right there. She's a little matchy-matchy with the socks and skirt that echo the blues in her top, but at her age you can get away with that sort of thing. Overall, a good look from our youngest fashionista. If you saw someone wearing this at a party, you'd want to be friends with her for sure.

And that about covers it for this week. If you like what you've read, please share this blog with your friends. Getting web traffic warms my heart like a tiny little heart-shaped Cosby sweater. (Gross.)
Posted by Unknown at 8:00 AM