Season 4, Episode 1: Call of the Wild

This week's plot makes absolutely no sense to me, not because the events themselves are nonsensical, but because we seem to have rocketed past some major events. Remember how last season, the audience was forced to watch a graduation even though none of the characters was graduating? This season, they open with the revelation that while no one was looking, Sondra and Elvin got married and went on their honeymoon. Wait, what?! Can we say oversight? In what world would we not have at least a full episode about the planning followed by one devoted entirely to the ceremony? It seems preposterous that the writers chose to fast-forward through that whole process. Regardless, Sondra and Elvin return from their honeymoon to announce that they've given up on law school and med school respectively, and instead intend to open a wilderness store in Brooklyn. They promptly find and move into a sub-par apartment. Cliff and Clair deliver priceless reactions throughout. 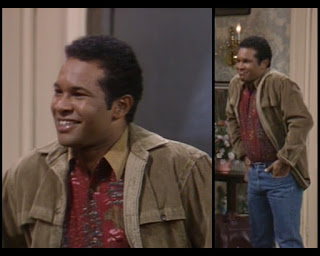 Buy camping gear from someone who's obviously never been camping!

When Elvin arrives, there's an obvious effort to give him a bit of a woodsy edge. The jacket has a slightly rugged vibe, while the shirt is maybe what a New York academic would think of as outdoorsy. Something about the print suggests trees or moss or rocks or another incidental pulled from nature (that might even be a bear on his chest) without actually depicting any of those things outright. Unfortunately, camping has little to do with cute clothes, and Elvin supports that end of the bargain as well. The brick red is a little blah for me, and made blah-er by the junky design work overlaid onto it. It's tough to be offended by a khaki jacket, but wearing a collar in a conflicting shade of tan makes it easier. And if you're going to tuck in your shirt, wear a belt. You can try to cover your waist by putting your hands in your pockets, but I can still see that there's no belt there. 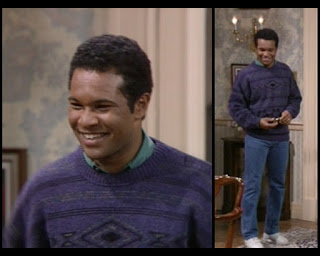 Then again, can you really picture him as your doctor?

At least he raised the game with his apartment-hunting outfit. Those are, I assume, the same jeans, but livened by new surroundings. I applaud this amethyst sweater, especially the use of subtler gray stripes among the black patterning to add depth. The colorful collar popping out from underneath is another triumph. I'm even kind of into the white sneakers, but that's likely because of the retro craze that they have since spawned. Still, he looks presentable and dependable without seeming like he's loaded, which I'm sure helped him in nabbing his affordable living space. Nicely done, sir. 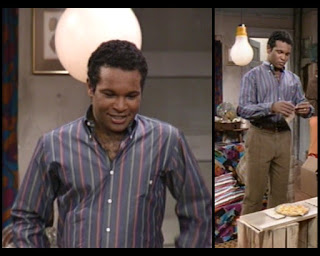 Come to think of it, I'm not sure what job I imagine him doing well.

For his dinner with the Huxtables, Elvin selects a shirt that I feel was intended to mirror Cliff's episode #1.21 striped number. His whole outfit seems like an homage to his new father-in-law, perhaps as a way of suggesting familiarity and depicting his respect for the doctor's fashion sense. It's a solid look for him, though the palette is too saucy and technicolor once you get close. I like that it's deceptively simple from afar and then has deeper layers on a closer viewing, but the brights are too bright. The pinks and teals are very of their time and could stand to be toned down a bit. It's generally best on a dressier look to choose one standout color and let the rest serve as a tasteful backdrop. At least he's belted this time around. 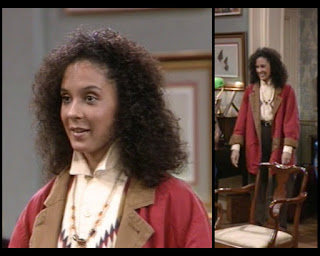 Sondra's entrance is marred by a full repeat of her episode #3.09 mistake. Additional points will be docked for her popped collar and limp hair. 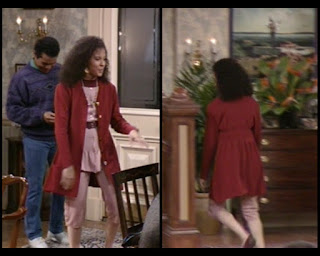 She veers from rancher back into Romantic with her britches-and-overcoat creation. It could be worse, honestly; while I'd encourage her to scale back the dusty rose in favor of other colors, I don't mind her interest in non-standard shapes like short pants and tunic tops and high-waisted garments. It's really the color scheme that throws her in this case: she could better accentuate the various elements of her outfit by differentiating them with complementary shades. Still, it's a daring take in terms of cut, with care shown for details like the fastenings running up the sides of her pants and the thick belt matched to her maroon undershirt. I'd love to get a closer look at this one-scene wonder. 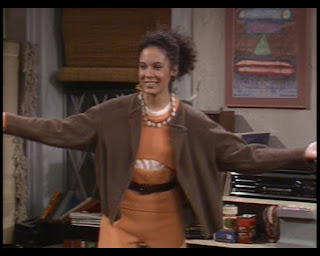 Or maybe just lost in the irregulars bin.

The getup in which she greets her parents is kind of disorienting. I wish she would have taken that shapeless brown cardigan-ish thing off, because I want to know exactly what's happening with the creamsicle pieces below. It's unclear to me how everything fits together. My guess is that she's wearing pants that extend clean up to her rib cage, but that seam over her pelvis leads me to wonder if maybe the band of fabric across her torso is its own thing. It doesn't appear to be attached to the uppermost portion, which is probably ugly enough to be the devil's crop top. No one could say that she's playing it safe here, but I don't see this risk as having yielded much in the way of reward. 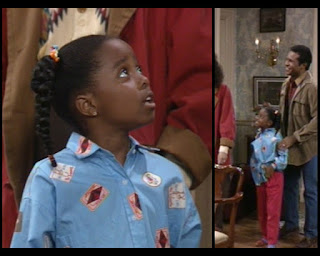 Wearing playing cards because she already knows that life is a gamble.

The other siblings barely register in this episode; it's all about Sondra and her parents. Rudy's brief appearance serves to remind us that we should be wearing more slacks in bold hues, but should always be careful about the sizing of our Oxfords. She gets some special dispensation for being a growing child; this was likely purchased with the idea that she'll still be wearing it a year from now when she's significantly taller. 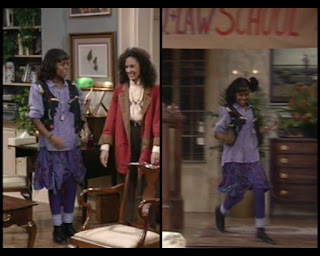 Go back to Party City where you belong!

Vanessa's truncated involvement in this scenario is probably for the best, because this is a nightmare. The shades of purple are all wrong, the vest is a joke, the side ponytail offensive, and don't even get me started on the skirt, which, in addition to having some of the worst construction this side of a hasty Project Runway creation, is marred by what appear to be ribbons just dangling haphazardly from it as if that's acceptable. If I go closer to examine the fit of her shirt, the bunching of her socks, or the jewelry with which she's accessorized, I will almost certainly be thrown into a rage and break my computer monitor. Let's just jump ahead before things get serious. 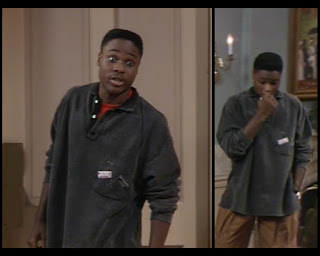 Theo's commitment to giant, uninteresting apparel is still total, it seems. Other than the black and white flags on his big-enough-to-hold-a-book pocket, he's going for plain gray sack up above and plain brown sack down below. The red t-shirt barely evidenced at the neckline is the only thing stopping him from causing narcolepsy in everyone he meets. Most shocking misstep: his top extends well below his waistline, and yet we can still tell that his slacks are aggressively pleated. 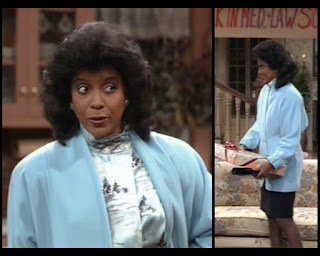 Her face is delivering in this episode.

A lot goes right with Clair's first outfit. She seldom veers into baby blues, but the color is superb on her, especially with the support of that high-necked blouse. Sometimes you just have to pick a color and run with it. Not every woman could wear a print inspired by a Bob Ross painting, but she seems to be supporting happy little trees without difficulty. While the skirt is tailored appropriately, the jacket has some problems. Observe: 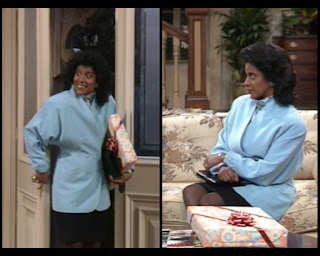 On the left there, she is literally just saying hello to her husband. No joke.

She's gone with that baggy, wing-shaped sleeve before, but on a garment that's already overlarge, it just doesn't work. Her expanded top half and poufy hairdo conspire to make her head seem shrunken (an effect that she hopes to combat with broadened facial expressions, apparently). For the billowy thing to work, she needs to tighten elsewhere. Then again, on a fabric this strong, she might have to abandon the concept altogether. You can't really do flowy on a winter coat. 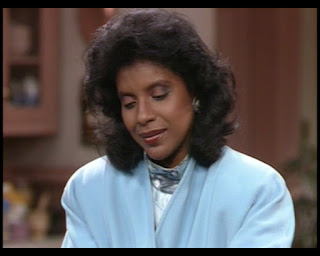 She could be posing for the Pieta here.

I also want to quickly point out that she's doing that thing again where she applies a smudge of dark shadow just to the outside of her eyelid. Not sure that I feel great about that. 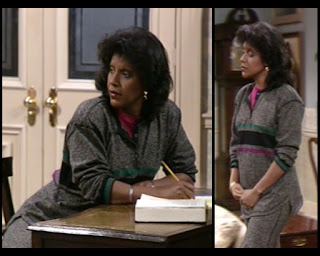 Not a sweatsuit, because she doesn't sweat it.

When the kids come home to announce that they've found a place to live, Clair is serving up kind of a fashion sweatsuit. She's better off in terms of shape than you'd expect, giving a nice tight legging and a surprisingly slim top, even if it commits the typical crime of shoulder slump paradoxically matched with shoulder pad. The heathered gray accented by fuchsia and green dates this outfit almost more than the tailoring, though: people just aren't into matching like this anymore. In general, you're better off finding pieces that accentuate and build on each other than simply looking for sameness. 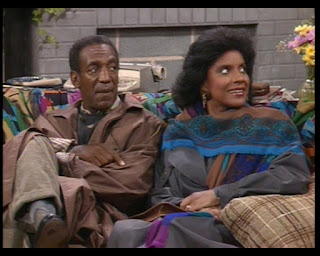 OK, she maybe sweats in all those layers.

For some reason, Clair never takes her overcoat off when she visits her daughter's place. Nice scarf, I suppose. 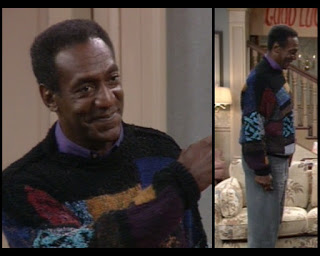 Starting strong, Cliff pulls out another entry from his sweater-made-of-sweaters collection. These pieces have almost become review-proof: there's nothing to say about an anomalous fashion decision that became culturally iconic, you know? I mean, it's a Cosby sweater. Its greatness is inherent in its legacy, even if it's empirically just weird and maybe even bad. Props to the purple collar and slate pants, though. 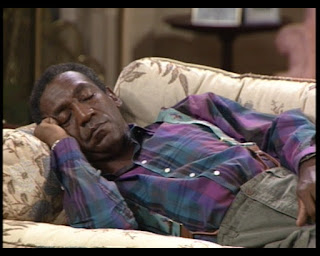 Wake up! You have to shame your daughter for her income bracket!

This second outfit is just stellar. He has a lot of vibrant plaids, but this one takes the cake, especially since it pairs perfectly with the bird suspenders (which he's worn a lot, but seldom in an appropriate color context). I'm loving this. 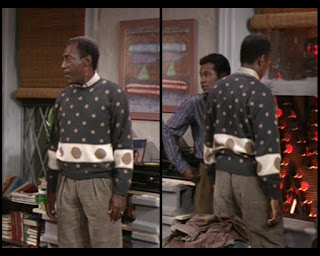 He has zero patience for poor people.

He finishes out on a low note, however, with this polka-dotted situation. Putting a bright horizontal band around the widest part of your body, especially on a loose garment, is pretty much the worst option available to you. And spots can work, but they don't here. The bigger the circle, the bigger the risk, and he aims too high this time around. Then again, maybe his intention was to be off-putting, seeing as how he spends the whole episode overtly judging Sondra and Elvin.

In another lifetime, I'd love to do a blog comparing the New York of The Cosby Show with the New York that actually exists, or that existed back then. But that's not what we're here to talk about, and since we're out of clothes, it's time to pack it in. See you next week, kids.
Posted by Unknown at 8:00 AM