Summarizing this one is a little strange for me because the plot that I witnessed seems to be missing a crucial chunk. The IMDb and I agree on most of the major occurrences: Cliff takes Rudy and her friends to a fancy restaurant while Clair hosts her sister and some friends at home. But while the online recaps (and the title of the episode) suggest that Aunt Sarah reveals her plans to have a baby, the DVD excludes this key scene, focusing instead on a subplot in which Theo teaches Vanessa to play tennis. I knew that earlier seasons had excised certain footage, but I thought that I was now in possession of complete episodes. I guess not. At least today's omissions are unlikely to include costume changes, so the fashion review can be considered complete regardless. 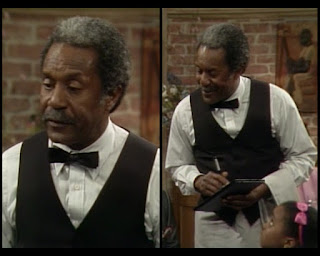 If he knew the kids would hate the fancy burgers, why didn't he warn Cliff?

If this waiter were played by any random extra, then I wouldn't have bothered with him. But since he's played by Lee Weaver, I'm giving him a nod even though he's wearing the plainest plain server uniform I can imagine. His presence is notable in that he is Mr. Cosby's former costar from The Bill Cosby Show. He has built an extensive list of credits that starts in 1955 and reaches to recent guest appearances on Party Down and Community. So, that's that. I'd examine his attire, but why? 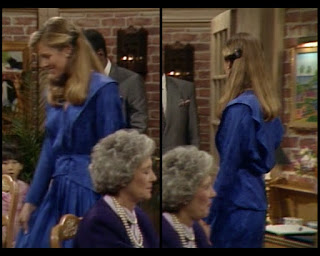 My faith in this establishment is shattered.

Patricia L. Robinson makes both her debut and her exit from the acting world in this moment as the restaurant's hostess. She's another one that I debated ignoring entirely, but her styling has some bizarre details that I found difficult to pass by. For starters, that giant hair clip is the kind of relic that you just don't see anymore, and this appearance serves as a vital reminder of why. But more compellingly weird is the Florence-Welch-on-Big-Love cobalt dress. At first glance, I found it forgettable, but the ruffled back encouraged me to dig deeper. Sure enough, it has the built-in top-apron of a frontier woman's couture, albeit in a silkier fabric than you're likely to find in farm country. There's something almost modern about the abundance of fabric on her slight frame; the pleated skirt and shoulder pads land this quite solidly in the past, but the overall silhouette is making admirable strides toward rightness. I would love to get a closer look at this garment so I could examine the barely-there print, which might be genius but could just as easily be dreck. 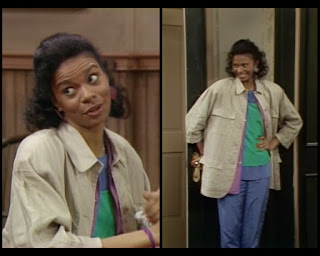 Don't stand with pride. Hang your head in shame.

Aunt Sarah is back, though when she entered in this concoction, I wished she hadn't bothered. She and her friends have just arrived from the "health club" (because that's what you went to instead of the gym back in the day), but they've ostensibly changed, so there's no excuse for her to be wearing medical scrubs or pajamas or whatever's happening in the pastel blue bedrock of this mess. A green tank, lilac shirt, and khaki giganticoat still won't hide the fact that your look is busted. (In fact, they're only exacerbating the problem.) Nothing fits, nothing matches, none of the individual items should even be worn alone! I'm giving her a pass on the earrings, but everything else needs to GO. 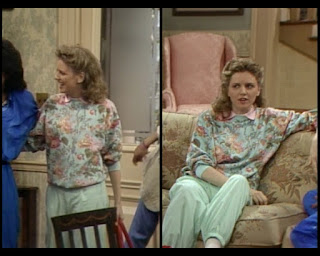 She has become one with the couch.

One of the friends Sarah brings over is Glenda. Poor Eve Gordon got thrown the episode's derpiest lines (and derpiest costume), but she's done quite well for herself since then. Her television career is going strong right now: in addition to guest appearances on Mad Men and The Newsroom (among others), she's had recurring roles as Connie Colburn in Don't Trust the B---- in Apartment 23 and Dr. Hall in American Horror Story. Basically, if you regularly watch a show that's popular right now, you've seen her. Thank heavens she succeeded, because nothing about this situation suggests that she would. Like Sarah, she's wearing pants that make more sense on the treadmill than they do in public. Her shirt, on the other hand, makes the most sense as a throw pillow in your great aunt's house. The sickly mint green, the overwrought florals, the cloying pink collar peeking out... this isn't a job you grow from: it's a job you escape. 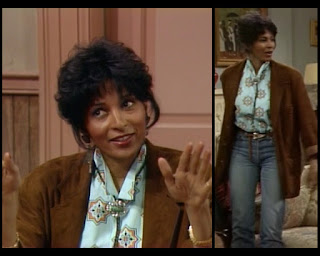 She kicks zero butts in this episode. A waste!

Glenda was already lame, but she looks even worse in comparison to Sarah's other friend: PAM GRIER! That's right: Coffy, Foxy Brown, Jackie Brown, Kit Porter: however you know her, I'm confident that you know her. It's a shame that she's not playing any of those people, but is instead here representing Samantha, whose most badass quality is that she can beat a man (a man!) at racquetball. She has at least completely changed out of her gym clothes for this interaction, though she made the dubious choice of donning some Sondra-esque ranch hand drag. I'm convinced that the robin's egg shirt with the star patterns could serve admirably as the foundation for an entirely different outfit, but paired with a suede jacket and, dare I even type the ugly words, a bolo tie, it just becomes an unattractive Halloween costume. Speaking of that tie, it doesn't actually hang all the way down to her crotch: it happens to line up perfectly with the too-long belt that she has perplexingly tucked downward in an almost phallic fashion. Is this a nod to her masculine sporting prowess? Nice subtext, guys. Seriously, though, she is a force to be reckoned with, and this presentation degrades her. How could anyone mistreat an icon so? 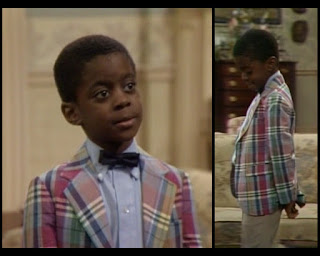 He doesn't want to sit down because he knows he is SITTING.

First in line for lookin' fine is Kenny, who nears perfection with this blazer. An adult would struggle to pull this off because a plaid so strident on a full-sized article of clothing could overwhelm any outfit. His small frame is exactly where you want to be throwing around the zany choices. I would have advised a white or yellow shirt underneath as opposed to the standard periwinkle, but the color isn't wrong per se as it's also found in his jacket. The tiny bowtie is priceless. If I were three feet tall, I'd totally dress like this. 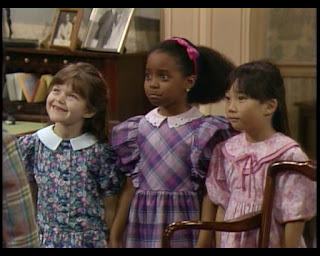 All glammed out for a meal no one will enjoy.

I'm including Rudy and her friends as a group because they're serving variations on a theme. Little ladies in girly dresses with collars and puff sleeves. Everyone looks adorbs. The guest stars both have surprisingly repetitive names: that's Penni Penniman as Beth to Rudy's right, and Me Me as Morgan to her left. Neither of them had an acting career outside of this show. (Since everyone's a little matchy-matchy, Rudy clarifies her position as queen bee with the fuchsia headband bow and heart earrings.) 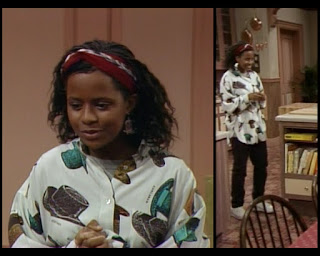 And I'm back to loving Vanessa. This is one of those creations that's simple enough to pass for a present-day look. Can't you imagine one of your friends buying this at a thrift store and wearing it with tight black jeans and chunky white sneakers? I totes can. Of course, she's actually setting the stage for such behavior to be possible, but nonetheless, the resurgence of tacky secondhand style retroactively makes her choices OK. Without this, we could never have had this:


If any of you knows the lady lip-syncing in the middle, PLEASE introduce me.

(OK, the video doesn't have that much to do with Huxtable fashion, but it's not completely irrelevant.) 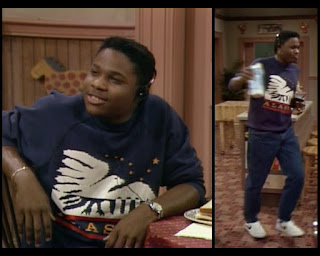 This blog is hard for me because I really, really hate sweatshirts.

I'm giving Theo a free pass on his first outfit only because he specifically points out that he intends to stay inside and do nothing for the rest of the day. If you're going to sit in your room alone and listen to music and eat sandwiches, then it doesn't matter that your Alaska sweatshirt is breathtakingly ugly and clashes with your mom jeans. 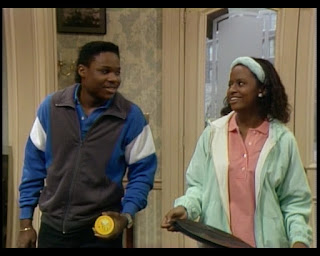 Where were they playing tennis? Maybe at the "health club"?

Vanessa and Theo both appear briefly in their tennis clothes. I don't feel like reviewing these outfits, so I'll fall back on the excuse that athletic gear is not part of what we do in this blog. (I love being the boss!) I do want to point out, however, that this is another one of those interests, like Vanessa's brief musical career or Rudy's single dance recital, that gets brought up and thrown out over the course of a single episode. Theo was on the wrestling team last we heard, but suddenly he's a tennis prodigy? Huh what now? 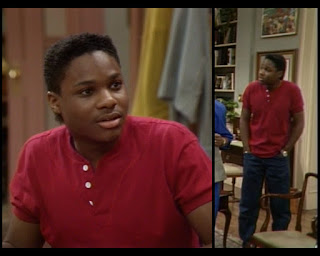 I wanted it to work out between us, Theo.

We're so close to a victory here, guys! The red is right, the button crew neck is casual cute, the jeans are... well, not bad. This could have been a teenage dream situation, until: 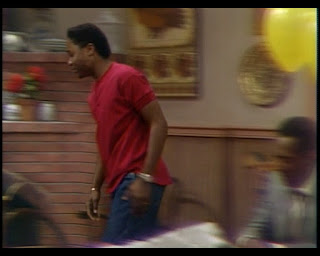 But it's just not meant to be.

ASS FLAP! This was a decade in which we were so scared of our own rear ends that we had to design shirts that would hide them with extra material. This situation is made all the more tragic because it invalidates the absolutely perfect tailoring of his sleeves. Dammit, Theo. 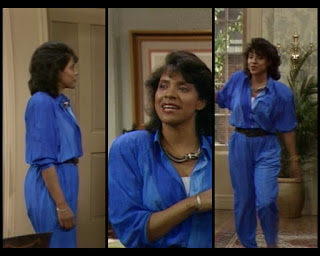 I want to cover all of these coveralls.

Clair has delivered some knockout jumpsuit hotness in the past, so it's not unreasonable for her to give this one a go. Sadly for her, the key details that made her previous efforts so triumphant are missing, leaving her looking a bit slouchy and frazzled. The subtle color gradients and wispy fabric detract from any sense of structure, turning the garment into something like a clown costume. She tries to minimize the damage with a belt, which is a smart idea, but by cinching her waist too high, she ends up creating a megabutt that creeps halfway up her spine. The shoulder pads do a similar job on her torso, causing the fabric to billow outward in a way that erases the definition of her curves and makes her seem loafy. I love her lots, but the only thing I love about this outfit is the necklace, and I'm probably only clinging to that because I don't want to be left with nothing at all. 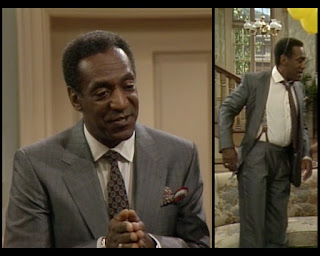 How does a man who has raised four other children still have no idea what kids like?

Cliff essentially delivers version 2.0 of last week's suit, taking the hue just a touch darker and swapping the modern texturing for a structured pattern. The result erases the maybe-too-young edge from his previous look, leaving him with a classy presentation that supports the slightly busy nature of the tie and handkerchief. It should also be mentioned that I love when he wears suspenders. How are those not his legacy just as much as sweaters? I'll never understand. Oh, and in case you're wondering about the balloons: 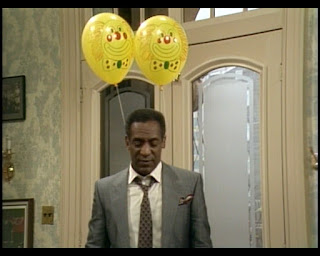 Maybe my favorite non-Clair image ever on this site.

This is how he came home from the burger joint. Amazing.

And there you have it: another week done. I hope you all weathered the superstorm without lasting damage. Take care until next week, lovelies.
Posted by Unknown at 8:00 AM