Theo receives a sack of cheap gags in the mail, but untrickable Cliff refuses to chew the dirt-flavored gum or submit to a joy buzzer handshake. As the family's frustrations mount, they're met with a golden opportunity: Sondra comes home to reveal that Elvin has proposed, but Cliff is out of the house and misses the announcement. Clair and the kids plan an excellent ruse, but the doctor is too sly and gets the upper hand in the end. 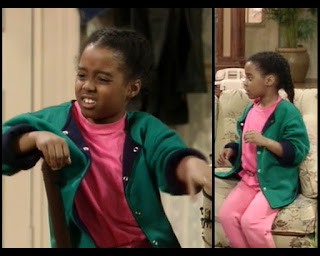 There's no indicator that Rudy has been outside at all today (and if she had been, I hope she would have rolled those sleeves down), so she has no cause to wear a jacket. I suppose one could argue that this is more of a cardigan, but the snaps, the bulk, and the contrasting lining all say "coat" pretty clearly. To me, wearing outwear indoors broadcasts that either your outfit is missing something or the heat is too low. I'll assume the former in this case: the Huxtables can afford that gas bill, I'm sure. Rudy, on the other hand, has forgotten to insert a color other than pink into her look, and is now in the awkward situation of scrambling to find sources of tonal variance. Just go upstairs and change your shirt, dear. Accept defeat gracefully. You look great in neon, but enough is enough. 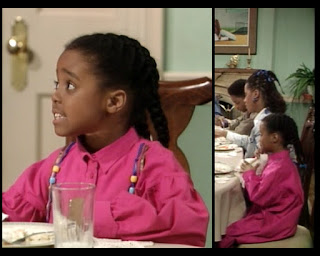 Maybe she's colorblind and thinks this has depth and interest?

Everyone changes clothes for the big dinner, but no one offers the camera a great view of their formal duds. This side view of Rudy is probably the most explanatory shot we get of anyone during the whole meal. She's obviously going through some sort of obsession with this shade, because it's head-to-toe peony once more. The garment reminds me of her episode #3.11 coveralls, but I'm pretty sure this is actually a shirt dress made from a rather stiff material. This time, the realization that she went monochrome led her to dangle beaded fringe half-heartedly off her shoulders. It's not fooling anyone, Rudy. You're still 98 percent pink. 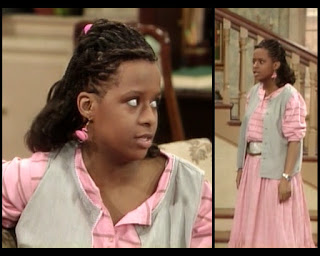 Choose the right accessory and I'm yours.

Vanessa, you're in on this pink thing, too? I talk a lot of smack about this girl, but I'm actually feeling a lot of what she's presenting this week. Perfect? No, certainly not. But she's miles ahead of where she usually is. By juxtaposing the prom-style skirt with a plain ol' long-sleeved tee, she hits this wonderful stride where her clothes become commentary a la Denise. Especially with the sleeves bunched like that, she's projecting the silhouette of a Disney princess while simultaneously undermining that girlishness with the scrubby details. Like, the only time you see a vest that janky is on the housekeeping staff at the Red Roof Inn. And yet if you look closely, it has these tiny little white frills on it that are all, "See? PRETTY." And the belt! It's wrong and right in ways I can't even type. But what pushed me right over the edge were her flamingo earrings. Case closed, everything is perfect. The black sheep scores a touchdown. 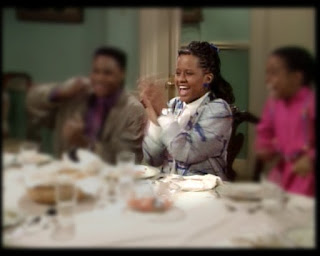 Look at me using Photoshop. (Let's be real: GIMP. I'm on a budget.)

It's maybe for the best that Vanessa has no lines and negligible screen time at dinner, because it would hurt my feelings to have to review this obviously terrible apparel-thing after her recent surprise victory. But I'm not going to draw bitchy conclusions from insufficient data (at least, not today), so instead let's continue to bask in the feeling of enjoying her previous look. 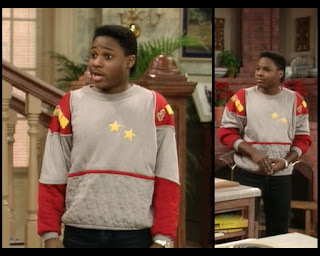 I'll say this, Theo: it's not boring. Though I don't care for this sweatshirt, I appreciate having something to talk about finally. It's not even all bad: I'll give points for the color blocking on the sleeves. But the yellow flocked stars and squares don't work, both because they're unnecessary and because they read way too young. They're the sort of Lucky Charms shapes that we should be sewing onto Rudy's shirt to break up the single-shade parade. The worst offense here, however, is that quilted swath over his tummy. It adds the impression of roundness exactly where you don't want it, expanding his slim middle in a way that suggests his father's proportions. If all this same nonsense had been applied to a shirt that fit him tightly, he'd still look dumb, but significantly less so. (I know I never review his jeans, but I'm just not capable of coming up with something new to say about jeans every week.) 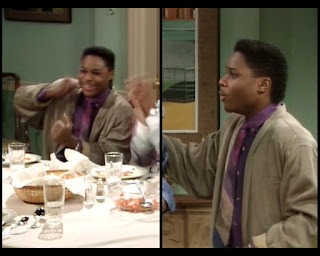 He has to dig back a full year to find clothes I like.

I'm glad the episode #2.5 tie is back. That's a nice tie. I don't think it's the same shirt though, as this one is a deeper purple . It still matches well. I approve. Like Rudy, Theo has opted for an over-garment that presents as a coat even if it's not actually a coat. It seems a hair flimsy to be even a windbreaker, and the lapel is thin like a shirt collar even if it does run all the way down to... well, it could be floor-length, for all I know. There, mystery solved: this is a bathrobe. Seriously, though, it's never the right time to put yourself in a beige sack. 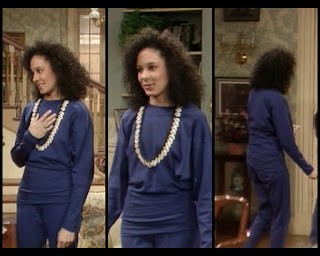 I will not make a "totally leotarded" joke.

No Denise this week (since this was a surprise visit, she was doing her regularly scheduled college stuff during the engagement announcement), so we're skipping straight to Sondra. In some ways, I'm proud of her: she's experimenting with styles that actually fit her body, and I have to commend that. The wrap at her waist is elegant, and everything else is tailored without being tight. There's an almost minimalist chic about this, or there would be if she weren't ruining it with that trashy shell necklace. It'd be worth it for her to incorporate a print or color shift somewhere, though; otherwise, she's basically costumed for a modern dance recital. She's going to express her joy about Elvin's marriage proposal through ten minutes of jagged arm movements, harsh pelvic thrusts, and guttural shrieks. After dessert. 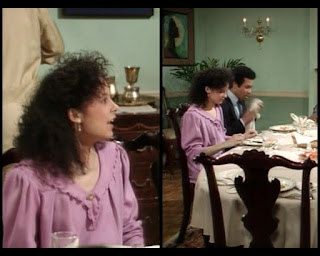 She's not waking up tomorrow morning (ha ha) and finding that there's nobody there.

Nope, I got that wrong. Since she's wearing Jennifer Holliday's Dreamgirls costume, I can only assume that her after-dinner performance will be a window-shattering rendition of "And I Am Telling You I'm Not Going." (You'd better eat a lot of that dessert, girl.) 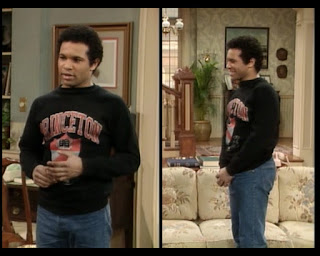 My crush on Elvin is beginning to fade. I mention this only because there is absolutely nothing to say about this outfit. 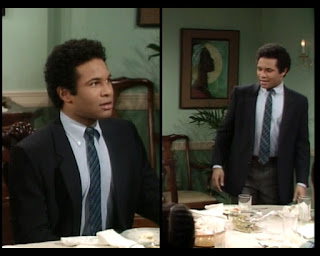 He has like eight reasons to be nervous during this dinner.

He's not really doing anything exciting here, either. A periwinkle shirt and blue blazer are sleep-inducingly predictable. The contrasting green on the tie is a little Tron for my liking, but it's otherwise an inoffensive presentation. 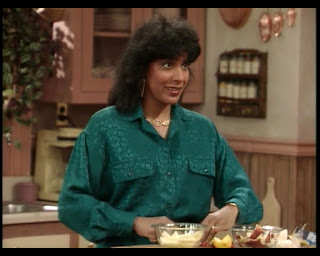 "Fix my hair? Honey, you couldn't handle it if I did."

Oh Clair, you are so beautiful. I'm giving you this screen grab to show my affection, because the next ones aren't nearly as flattering. 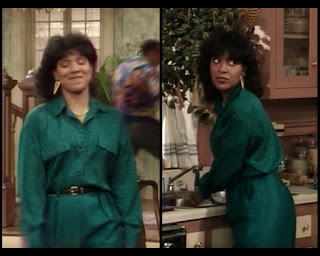 That necklace has been worn a bunch before, but I'm too lazy to link it right now.

Was there a memo circulated? One shade maximum? Is this secretly a live-action game of Clue? Nonsense abounds. Mrs. Green here looks fierce in emerald, and she at least creates a dynamic sense of motion and depth by using patterns and shine. However, the high, deeply pleated, poorly tailored trousers make her downright bulbous. Also, look at how her pockets slant downward: she has to keep her arms akimbo, like in the previous shot, or her chest becomes droopy. Her shirt needs to be darted. I'm a fan of this in that I'm more inclined to like whatever she's wearing, but objectively it's not an awesome ensemble. 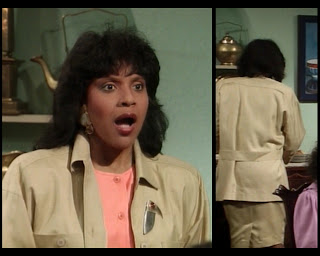 "The only thing that separates us from the animals is our ability to accessorize."

I'm stunned too! Why is that burly safari jacket even in your closet? The skirt is the right length, but the wrong width, and the peach top underneath is underwhelming and rather casual. One big toucan brooch is not going to save her: this needs an overhaul. (I'm betting this suit is by the same designer as her episode #3.19 number: they share the same back strap and overall fit problems.) 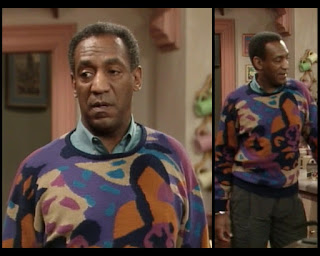 I call this one "The Girl From Ipanema."

There's a subset of Cosby sweaters that are basically wearable art prints. This one, for instance, is a stylized depiction of a long-haired woman in an off-the-shoulder blouse; the image is repeated on each sleeve as well. I'm in love with the strident colors and pared-down quality of the image. I feel like if this were worn today, it would be considered more feminine. Someone could rock this as the bulky top half over a tiny skirt and tights. 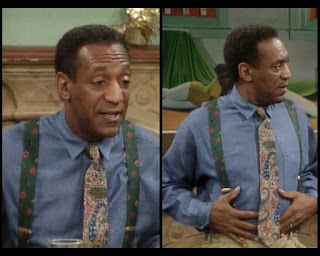 Cliff's dinner look is part of the scam. See, if he knew that his daughter was about to announce her engagement for real, he'd probably have worn a suit. But since he thinks he's just dressing for a less momentous family dinner, he grabbed a gaudy tie and a loud pair of suspenders and presented himself like the goofy father that he is. In fact, he probably upped the nuttiness just a hair because he's a skilled troll, and he knows that everyone wishes they had told him the truth so that he would have looked less like a jerk. Since this whole getup is a joke, I can't really fault him for its ugliness. But damn is it ugly.

And with that, we come one step closer to the season's end. Thanks for continuing to read along; I'm having more continued fun doing this than I ever thought I would, even if it is an unexpectedly time-consuming endeavor. As always, donations are welcomed. See you all next time.