Denise is throwing a wedding shower for Veronica, one of her best friends (supposedly... you'll note we've never seen this gal before even though they're totes close). During the party, she learns a shocking secret: Veronica is not getting married because of an accidental pregnancy, but rather got pregnant to ensure that her parents would consent to a wedding. All involved agree that this was not a particularly wise choice. To ensure that the gathering remains women-only, Clair has bought Cliff a set of shelves to construct for his office; he and Theo spend the day wrestling with instructions written in French. 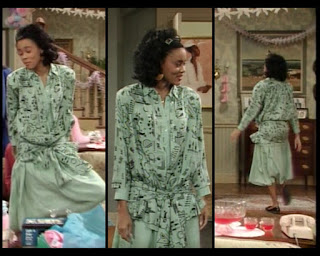 Veronica is portrayed by Lela Rochon, who got her break in Waiting to Exhale and has been working steadily ever since. She's great in this part, because her sweet, genuine beauty makes it impossible to wish her ill. Even though this baby is just the dumbest idea on the planet, the whole time you're rooting for her because, oh, that smile! She must have such a kind heart. She deserves better out of life! When looking at her clothing, bear in mind that she's just beginning to show, so the placement of her belt and bunching of her shirt are planned accordingly. In that light, the construction is more clever than misguided. She wears this mint shade well, and the spastic black print breathes some life into the single-toned presentation. I'm surprised by how much I like the idea of a buttoned shirt atop a matching shirt dress. It sounds like a train wreck, but I'm oddly into it. Even the layered effect of the two sleeve lengths wins me over. It'd be better without shoulder pads, but we can't have everything. The skirt could use some revision: it has a nice flow to it, but it should probably go all the way down to the ankle rather than hitting so strangely at the knee. Also, the double-belted situation used to mask her bump in the front ends up hugging her butt in a way that creates entirely undue emphasis. It's a very nice behind, but there's no need to shrink wrap it. 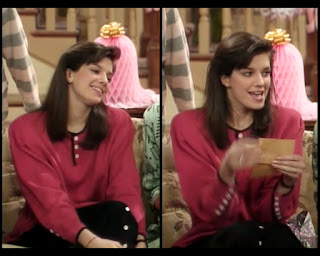 I was going to make a Mrs. Cruise joke, but that ship has sailed.

Their friend Cheryl is played by Susan Diol, a consistently working television actor whose IMDb bio makes no mention of any relation to Katie Holmes even though she is doing such a Joey Potter in Dawson's Creek thing with this character that I can't even tell you. She comes to the party to read a bad poem in a weird baby doll voice. The palette she's working with is fantastic: black, white, and a signature red is always a good look, and she mixes it up by going with a sort of mauve-y option rather than a true apple red. On the other hand, the button proliferation has gone way overboard. Collar, cuffs, and skirt? The five on her sleeve seem especially excessive. They practically reach her elbow! Calm down and rein it in, lady. 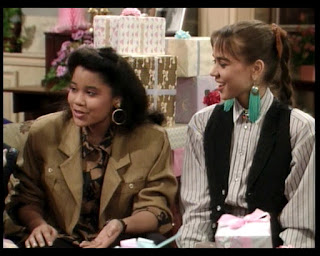 Two nobodies in New York. (Tell me someone knows that reference.)

Too many women attend this party for me to review them all. Let's just all agree to be careful with how long our turquoise earring fringe gets. Can we also try for more color in general? Other than a handful of jewelry, these two women are wearing three shades between them. Those three shades, by the way, are black, white, and brown. Not making any big statements there, huh? We can do better for sure. 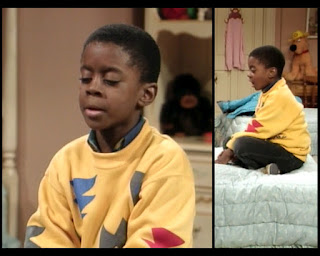 Dude is such a Republican.

Kenny is back to debate gender roles with Rudy again. I don't know if I support the concept of dressing children in collared shirts for play dates, especially underneath what appears to be a mock turtleneck sweatshirt. He doesn't need to look that nice, and the formality is undone by the casual nature of that yellow thing with the geometric embellishments anyway. His parents need assistance in the wardrobe department. 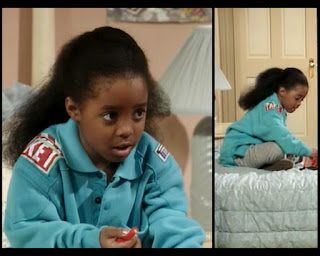 Rudy's collared top is more appropriate for a kid. It's one piece, a cheaper fabric, and it looks like she's still growing into it. It's not exceptional, but who cares? She'll probably ruin it before it fits her properly because young people wreck things. Shirt? Fine. Leggings? Great. Shoes? Uh-huh. Congrats: you dressed your rugrat. DONE. 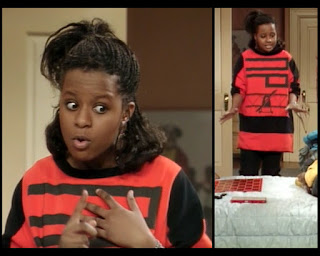 This is why Theo is dyslexic. Happy now?

More red and black! It's a solid look. Here's the thing that kills me about Vanessa's dress, though: THAT DOESN'T SAY "UP." The letters are oriented incorrectly. It's dU or np or Ub, maybe, but not UP, and that bothers me hugely. I also think the horizontal black band is poorly placed, creating a wide bar of emphasis below the broadest part of her hips that causes her to appear unnecessarily dumpy. The overall outfit has a great sporty vibe going for it, but it's boxier than it ought to be, so it's not doing her shape any favors. 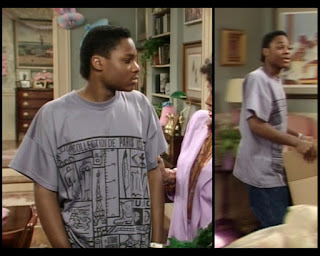 I swear, every week there's less reason to even mention Theo. Decent jeans, giant gray t-shirt. Thanks for that. I suppose the graphic with the French writing is interesting, though maybe a little too perfect given that he is about to be asked to apply his basic knowledge of the language to translate something for the first, and last (to my knowledge), time in the entire series. 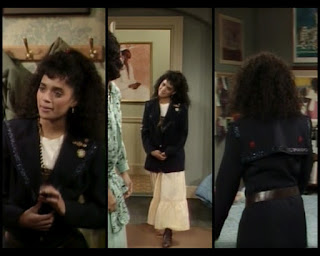 I will always love you.

Aren't you glad Denise is around again? Also, aren't you glad we've gotten so many wonderful 360-degree views of the actors this week? She mostly gets it right with her funky formal look, offsetting the bohemian style of her peasant skirt with the highly structured sailor's coat. Though I approve of her reference to the military nature of the garment by throwing in lots of pins like mock medals, I think the sequins across the collar and back flaps were a mistake. Know when to say when. Belts over jackets are way happening now (I think there's a solid case to be made that Sasha and Malia Obama led the charge in promoting that trend), so Denise is doing great on that front. As usual, I'm largely overjoyed with her contribution. 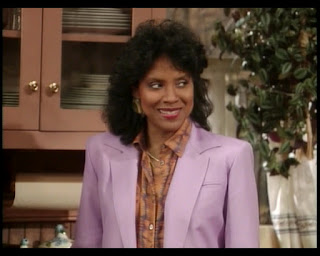 Everything. She is everything.

Oh yes, Clair, I am putting you back into regular rotation. You vixen. 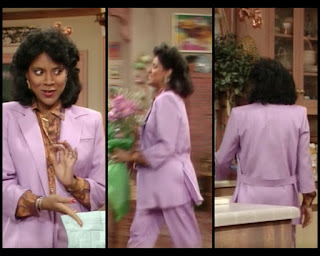 The faces she makes! You have no idea how I've missed her.

This suit has its strong points, with that lavender shade topping the list. However, even in comparison to the other women in this episode, I feel like her shoulder pads are a little out of control in their breadth. The whole thing is cut fuller than needed, which I know we've come to expect, but I can't pretend I didn't notice. Also, the whole point of a belt is to add some shape, but that strap across the back does practically nothing to taper the waist. While I love it as a visual embellishment, I wish it would do its job. I'm thinking about liking the three-quarter sleeves that allow for more of the shirt cuff to show, but I'm not completely sold at this time. Speaking of that shirt, it reads messy to me. The fall colors aren't quite right against that fabulous springy crocus shade, and they're too mushy in how they blend together. There's too much swampy, floppy looseness. Clair deserves a crisp, clean presentation. 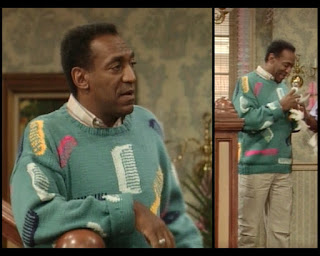 He uses this to groom his other garments.

And last but not least, we have Cliff, whose sweater is inexplicably and delightfully covered with combs of various hues. He wisely opts for khaki as the dominant force in his pants and shirt, surrounding this showstopper with neutrals so as not to distract the eye or create discord. The green is perfect, and the disparate whites and navies and yellows of the accent combs (and especially that neon pink) are phenomenal. My one complaint is that he has clearly rolled those sleeves at least twice to get them to fall at his wrist. How long are they when they're unrolled?! Who was this garment made for, the Slender Man? No one has arms like that. I guess the cuffs could be an intended design element, but they end up suggesting that someone doesn't know how to knit. Or, I guess, how to stop knitting. MOAR SLEEVE.

I'm always a little sad when I get to the end of the line and there are no more outfits to review. Mostly because I still have no idea how to gracefully close these entries. You'd think after more than a year of writing I'd have come up with something. I'll get there. (Maybe.) Anyway, please come back next week.

Oh, and if you're enjoying my reviews, please consider donating a dollar. Your contributions help keep this project going: there are hosting fees, DVDs to buy, and future improvements that could be made. If you chip in, I'll even send you a personal thank you note, because I was raised right. Anyhow, the button is right there. Click if you feel so inclined.