Let's clear one thing up right now: there's no such thing as the Andalusian flu. Why not use a regular flu? Unclear. Regardless, Clair is already sick with this dreaded, entirely fictional disease when Cliff begins showing symptoms as well. While they are both incapacitated, it's up to Theo to keep things running smoothly. Unfortunately, teenage boys are assholes across the board, so he makes his little sisters do all the work while he congratulates himself on being such an adult. There's also a pointless subplot about getting the banister fixed. 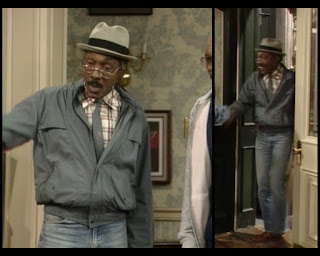 He shows up and leaves immediately, presumably because there's no Clair to leer at.

In a stunning display of continuity, Sam Lucas the handyman returns in the jacket he wore the first time he was on the show. Way to pay attention to detail, wardrobe staff! Though he never removes said jacket, we still get a decent idea of what he's up to here. Dark jeans have been the accepted standard for a while, but I welcome the occasional foray into lighter territory. After all, these pants aren't the hapless victims of acid wash crimes; they're a sky blue denim gone paler with years of exposure. I recommend that everyone have one good pair of light jeans in their closet. Notice how they soften the whole outfit. I don't think the top half would work as well with a richer indigo beneath it. The gray tie and outer layer meld so nicely into the warm brown plaid, and the pants maintain that dusty, low-key impression. In that context, even the darkness of his hat band sticks out as a smidge too harsh. 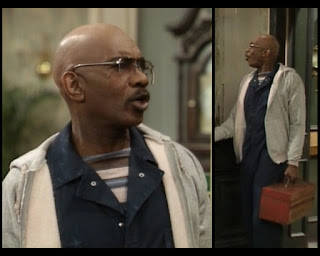 His voice is a gravelly wonder.

This is Lou Myers' second and final appearance on the show as Mr. Davis, and I wouldn't feel right about overlooking him again. This series gave him his first TV acting credit and paved the way for his role as Vernon Gaines on A Different World. He's done a whole bunch of movies since then. I'm really only featuring him because I think he's a wonderful performer. Go back and watch his previous episode where he asks Cliff to fight for his job. It's spectacular. His depiction of the character is a little less forceful this time around, which I think is kind of a shame. I still don't think there's anything to be said about what he's wearing. I guess the striped t-shirt is something of his own choosing, but it's clearly a ratty old work shirt rather than a signifier of personal taste. The rest is coveralls and a hoodie. There you have it. 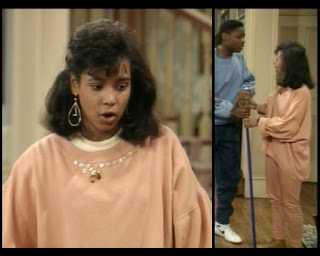 I know someone has worn those earrings before, but I can't find where. Anyone?

Lana Herman, who Theo asked out in episode #3.14, is back again. Things have apparently not been going well for her hair since our last encounter. Maybe it's really windy out there today. She's taking her previously established button obsession to new levels by employing them purely as decoration. Nothing on this outfit needs to be fastened, she's just fascinated with fasteners. The effect is cloying, unfortunately. There are plenty of flourishes one could add to a neckline (a necklace leaps to mind), so I'm not sure why she chose this method. Head to toe, though, her outfit is unsalvageable. Let's face it: from a distance, she looks like a nude, sagging white lady. It's not just that the whole thing is putty colored or that the top is huge: it's that the lower hem of her shirt actually scoops downward in the back to mimic a big, dumpy butt. The design purposefully drags her ass downward and away. I can't believe that she'll be back for a third date after this sad showing. 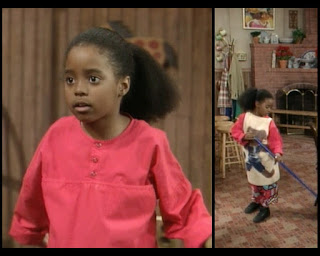 Rudy's top is a hair overdone given its application. A six-year-old girl mopping the floor doesn't need a felled seam across her chest. (Said seam also makes the boxiness of the garment all the more apparent by adding stiffness that reinforces the width like a hoop in a skirt.) One might be tempted to assume that she's wearing an ugly skirt, but I'm pretty sure they're actually ugly pants. Leave the mixing of patterns to your father, hon. You're not going to win at that game. I will say she looks good in that pinky red color, and that the apron with the teddy bear on it is adorable. Of course, why she owns it is anyone's guess. This doesn't seem like a household in which Rudy is frequently required to labor. 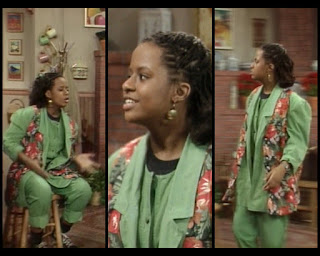 She was later incarcerated for inciting a zoot suit riot.

Vanessa's stellar performance last week was apparently a fluke rather than a turning point, because this is bad bordering on unacceptable. First of all, count the layers on top. Black t-shirt, green shirt, green jacket, horror vest. But then downstairs, her slacks are rolled to mid-calf. ARE YOU COLD OR NOT?! Also, why do you even own an entirely grass-colored suit? And if you're only going over to Janet's house, is a full suit (even a cheap suit) really necessary? And why did you not throw that vest in the garbage directly after episode #2.10? If there's an outfit this piece matches, you sure haven't found it yet. To prevent my commentary from being entirely derogatory, I'll offer tepid praise for the juxtaposition of casual converse with a look that draws from some formal business influences. That sort of pairing probably seemed fresh-ish 25 years ago. 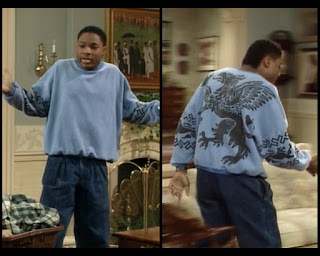 Is he wearing this because Vanessa calls him a tyrant? Because that's kind of lame.

One of these days, Theo is going to walk down the stairs in a shirt with a collar and buttons, and it's going to fit him, and I'm going to cry tears of joy. Until then, I'm apparently doomed to talk about sweatshirts a lot. This one is at least more daring than his usual selections, using screen printed images in the style of Medieval tapestries to say, "Hark! This be no common peasant shirt. Nay, gaze upon the glory of this mighty gryphon and the powerful sleeve lions by which it is flanked. This is truly raiment fit for nobility!" (I would love to know what the voice in your head sounded like as you read that, because mine was hilarious.) It's hard, because I want to love the showy strangeness of it, but I don't honestly feel like it works. He's trying new things with the jeans as well, serving up not only pleats, but also seams that run down the front of each leg like a crease. This is another example of detailing borrowed from a formal setting: he's trying to indicate dress pants, but with a lazy denim. Good effort, but it's ugly as sin and ruins the fit. Better luck next time. 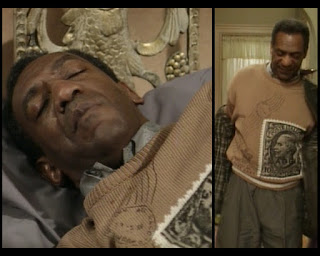 You're a doctor. You know this isn't even a real illness.

Since Clair never gets out of her pajamas (I'm not judging, mind you), we'll jump straight to Cliff. This sweater is a fantastic addition to his repertoire because it's supremely odd without being brash. I've never seen a garment with a stamp and postmark of such size. The focus of this piece is really to project, "I am a manila envelope being sent through the mail." However, it's constructed with neutrals, and the pattern of fine stripes is noticeable only once you get right up close, so it comes across with a sense of subdued control. Similarly, the collar of his shirt could easily be read as a flat tone, when in fact it has a faint print as well. The tans and olives of this outfit cohere impeccably, and since tailoring will surely fall below expectations for the entire run of the show, this is likely as close to perfection as we're going to get.

We're closing in on the end of the third season, and I'm excited to pull the shrink wrap off the next batch of DVDs. I hope you'll keep following along with me as we revisit the treasure trove offered to us by this series. Those of you who'd like to help out with the blog can do so in a few ways. The first and easiest is to tell people about it. Every time you post my URL somewhere, my traffic increases. Every time my traffic increases, I feel more like a freelance writer and less like a weird, obsessive recluse. Second: share your thoughts. Post a comment or write to me personally. I want to hear your feedback and suggestions. This project will keep trucking along, but if it needs a course correction, then you need to let me know. Third: donations are gratefully accepted. Think of the little yellow button as a tip jar: if you feel that your life has been made better by three seasons of thorough and (hopefully) humorous fashion reviews, then why not throw a spare dollar my way? Fourth: keep coming back. New posts are up every Monday morning, and it makes me happy when you read them. Thanks, all.