Season 3, Episode 18: You Only Hurt the One You Love

Apologies in advance: this is another light episode in terms of clothing. We should probably all be outside enjoying the nice weather anyway. The razor-thin plot is that Theo injures Rudy after an ill-advised attempt at recreating a tumbling act. Meanwhile, cutbacks at the hospital mean that Cliff has to say goodbye to his favorite member of the custodial staff.

I'll tell you right now that though Rita Moreno is a legend and does a fabulous job as Mrs. Granger, I didn't bother to capture her because she plays her one scene in a uniform, which there would be no point in reviewing. Ditto to Lou Myers, who delivers the show's funniest minute with his brief, insanely intense appearance as Mr. Davis. He'll be back later this season, so maybe there will be a chance to talk more about him then. 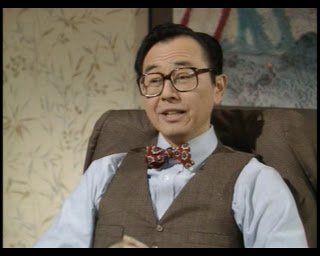 Terry Richardson is this guy's fault.

Alvin Lum, on the other hand, will be discussed in his role as Mr. Howe because he is wearing actual clothes. As an actor, he turns up once more on the show in the seventh season, though the IMDb doesn't list a character name and I don't have the DVDs yet to check if it's a different person or not. Other than that, he's had a handful of credits, ending with a small part in the 1995 remake of Sabrina. In terms of his business attire, he shows us only what you see here because his entire scene is played behind a desk. The pale periwinkle shirt is basically a uniform in and of itself: this choice typifies '80s office wear. The earth tone vest is a nice touch in that it both dresses things up and adds warmth. While I like the concept of a bow tie, I'm not crazy about this exact one. The black isn't great against that mulchy gray-brown, and the splotchy pattern is too much. Maybe he's trying to inject a little pizzazz into his buttoned-up duds, but there are better ways. 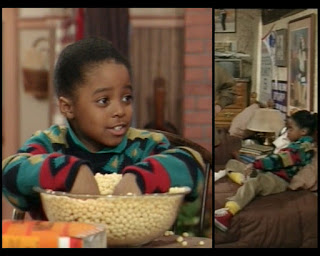 Yes, she starts the episode with both hands in a giant bowl of cereal.

Rudy continues to sport miniature Cosby sweaters, oddly opting for a Rasta this time around. I would have steered her toward a different shirt underneath: the color matches perfectly, but the popped collar is not to be allowed. A polo under a sweater can be difficult to sell because of how sturdy the fabric is. She'd be better of with something lighter. Other than the weird union of colors suggesting that one dude freshman year who thinks he likes reggae music but really just enjoys smoking pot constantly, this is a cute look. As a child, she gets leeway in terms of matching her shoes and socks to her top. (Theo, on the other hand, will continue to be denied forgiveness for similar missteps.) 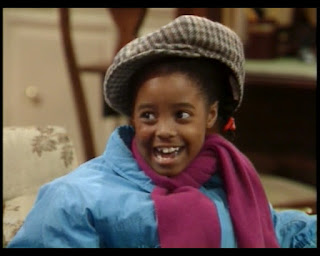 I don't want to get into Rudy's coat and scarf, but I do want to point out that we were lied to this week. Cliff claims that the nurses chipped in to buy Rudy this hat, when in fact it is his own: he wore it in episode #3.4, and Denise wore it in #3.14. I'm onto you, costume designer Sarah Lemire. (I'd suggest that this line was intended as a joke, but Cliff wears a different cap while this is happening, so it's not like he took the one off his head and gave it to his daughter.) 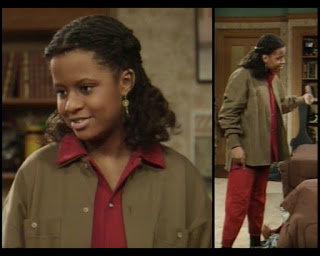 She has this odd, benign peace in her eyes. She's a poorly dressed Buddha.

I was initially convinced that I had reviewed this outfit already because of its similarities to her episode #3.2 presentation, but it turns out that these are different pieces. Also, worse. This takes all the failed elements of her previous offering while removing anything charming or interesting. Notice, for instance, how she omits the stripe in favor of a flat tone. The tailoring on these pants is less dynamic, opting for the dreaded tapered leg that was so popular back in the day instead of the more daring harem cut. The maroon is fine, but is made considerably less appealing by that dirt-colored top shirt. I guess she outgrew the other outfit? I mean, why would you own this when you've already got a better version of it in the closet? And why would you buy a copy of this ensemble when the first isn't that spectacular to begin with? Nonsensical. 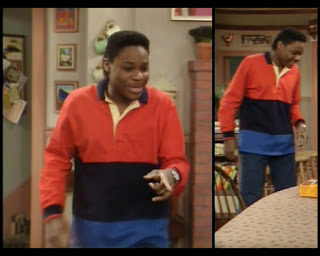 I'll give him a C- for effort.

It's always tempting to breeze past Theo because he's seldom trying, but this shirt deserves at least a cursory glance. If nothing else, it's a slightly different tactic for him. The casual long-sleeved jersey knit polo shirt had a real moment in the later part of this decade and into the early '90s, so he's on the cusp of something here. His use of that smoldering blood orange hue takes this out of failure and into... well, into not-quite-a-failure. I don't adore the overall presentation, but it's not nearly as lackluster as his other selections of late, so we're going to have to grade on a curve for a while. 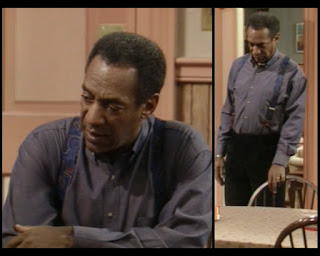 Cliff seems to start the day without an agenda and is probably intending to hang around at home, so I'm surprised by this ensemble. The shirt and suspenders are smart and professional, and all those cool purples give this an unexpectedly somber vibe, even if he's throwing down a bit of print. Finishing off with black slacks just cements him as practically dour. Luckily, he ended up taking Rudy down to the emergency room (completely unnecessarily, I might add), so at least his colleagues got to see him in his being-serious-and-important gear, but isn't it just lucky that today wasn't one of his sweatpants days?

And now: HOW ARE THEY HIDING PHYLICIA'S (recent) PREGNANCY THIS WEEK? 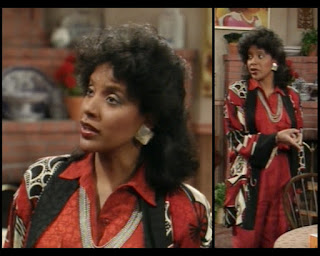 THEY'RE NOT! That's right, Clair is back, standing up and walking around like old times, and let me tell you I couldn't be happier about it. Well, alright, I could be happier about it if I were a bigger fan of this look, but I'll take what I can get. Which is not to say that I hate it, mind you. Her decision to go for all prints, all the time is certainly courageous, and such assurance should be congratulated, especially when you're working in such an eye-catching, tonally isolated palette. By restricting herself to white, black, and several bright reds, she pretty much guarantees a statement, especially when those fiery shades make up the majority of the outfit. This runs the risk of coming across a little casual, but I guess she's not seeing clients on a Saturday, and the kimono stylings class it up a notch anyway. I'm particularly impressed with the way the subtle stirrations in her top and pants (or is that a jumpsuit?) are mirrored in the black collar of her jacket. Let's also single out that multi-chained necklace, which obviously requires heavy praise. I will say that she's belting this a little higher than is usual, but that's probably the last vestige of an effort to mask the slight baby-related change in her body shape. Overall, though, her confidence brings this look home. There's a lot going on, but she carries herself like someone who was meant to handle every last overwrought detail.

Since this is another short week, let's skip the donation link again. I'll put it back up soon, though: season 4 is just around the bend and DVDs must be purchased! In the meantime, think about who you might want to tell about this project. Particularly if you know someone in publishing who wants to do something revolutionary like turn a blog into a book. That's a craze that I bet could really take off! (Seriously, though, this would go a lot quicker if I could quit my day job and live off the money from my advance for a little while.)

And that's all there is for now. Let's meet back here again next week. Bye!
Posted by Unknown at 8:00 AM