This episode is packed with guest stars, but most of them won't be covered here. See, half of the action takes place at the hospital, so though Cliff interacts with three expectant mothers, two husbands, a father, and a pair of other medical professionals, they all spend the whole time in scrubs, so who's interested? Not me. If you watch on your own, you'll hear some mediocre Spanish (come back, Phylicia!) and see Patricia Richardson before her Home Improvement days. But since we're skipping all that, it's the stuff at home that matters for right now. Vanessa brings over two friends, old favorite Janet Meiser and newcomer Althea Logan. When Althea smokes in the house, everyone goes cray. 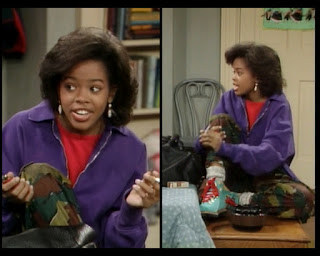 Her hair probably smells like the bottom of a barbecue grill.

Althea is played by Malinda Williams, who still acts here and there. I'm not familiar with much of her work, though seeing an episode of My So-Called Life on her resume makes me want to rewatch that whole show again. Her most famous role is probably Tracy "Bird" Van Adams on the series Soul Food. Keep an eye out for her later in this blog: she returns as a different character in season 6. Since she and Janet spend a great deal of this episode seated, it's difficult to discuss the fit of her outfit. This is a shame particularly because Althea is supposed to be extremely fashionable, so her choices should be held to a higher standard. From what I can see, I guess I get why the other girls might be impressed with her. This outfit has a certain gutsy quality to it. The purple pullover and red t-shirt are entirely unremarkable, but she surrounds them with a wildly disparate set of elements. The earrings pull her in a classier direction, but then underneath she's in grungier camo fatigues. The boots are somewhat in keeping with that combat theme, but have a spunky pop princess side to them because of the sky blue. While I encourage her continued experimentation, I'd steer her toward greater unity next time. This is what's left on your floor when you haven't done laundry in a while: remnants of other looks, haphazardly tossed together. This party craves a theme. 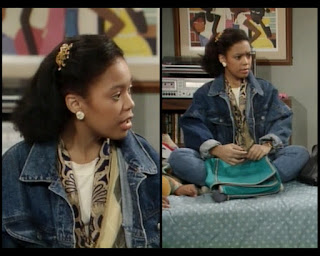 Janet doesn't offer us a great view of her ensemble, either, so I'm going to be doing some estimating and informed guesswork here. From what I can tell, the pants are a good, snug fit, though with the waist obscured, we're missing key data points. That's where Mom Jeans are made, you know? It could all fall apart if the middle is too high or too dumpy. Denim on denim has gone, come back, and gone again since this program aired, so this look has had its moments, even if it's not currently a guaranteed knockout. Inside the jacket, I think what I'm looking at is an argyle cardigan that is banded by an odd contrasting piece. I can't tell if that's an embellishment sewn onto the sweater itself, or if she's simply paired the garment with a weird scarf. Either way, it's not a great addition; I think the knit piece on its own would have been just fine, giving her a cute, preppy vibe that I can roll with. She wins me over with the barrette, though. There's an animal crawling in her hair!

(Also, the girls discuss a "new look" for Janet, but we never see the pictures, much to my dismay. I want to know about Althea's big plans.) 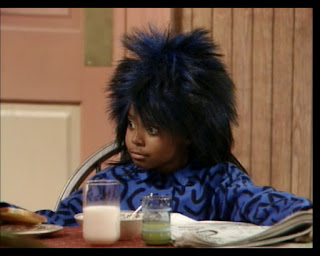 There's a stranger in my house.

Rudy starts the episode off like this, with the explanation that she was going through Denise's wigs. Apparently Denise had a lot of these? How was this character trait not explored in earlier stories? Why did we not see her leaving the house with things like this on her head? 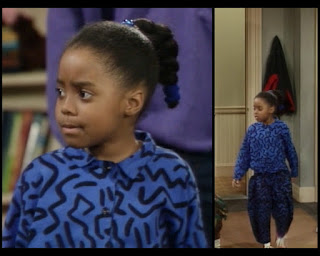 This shouldn't happen to anyone, but especially to a child. A big, puffy shirt and parachute pants in matching but inverted squiggle prints? I'm pretty unhappy with it. There doesn't need to be a lot of discussion as to why. 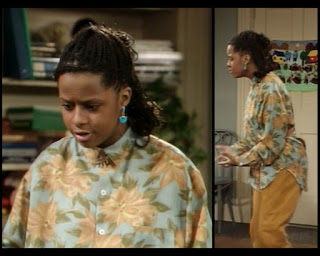 You looked at this outfit and really decided on those earrings?

Vanessa is starting to find a groove with her fashions, and while I'm not all the way behind her, I'm at least glad that she's coming into her own. There are several key elements present here that show where she's headed. First, a print, as illustrated by the Miami wallpaper flowers on her blouse. She's also showing more love for pins and brooches lately, like the one up at her neck. Oranges and yellows show up more frequently,  as seen in the peachy flowers and peachier slacks. And then there's the shape of her top, with the recurring Victoria elements of the high neck, long billowy sleeves, and waistline gathered around the back almost like a bustle. This isn't my favorite presentation from her, but in terms of style, I think she comes across better than Althea simply because she has an obvious point of view. 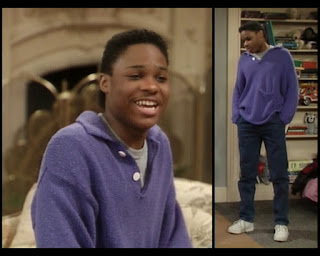 He's on the edge of whatever the opposite of glory is.

Theo brings back his droopy episode #2.24 sweater, which has only lost shape since last year. The jeans are nice, though. I'd wear those jeans. 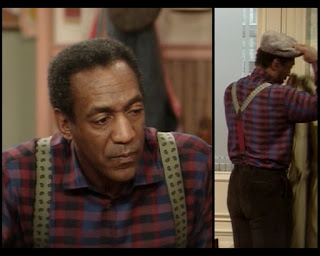 We seldom get a full 360-degree look at people, so I thought I'd include a little Huxtable booty to liven things up. Also, while we've seen these suspenders before, this view reveals the unexpected red band they've been hiding this whole time. I appreciate this shirt up close because of the way the reds and blues play off each other. Oddly, though, the effect that I enjoy so much becomes problematic at a greater distance. The intermediary shades are laid out in a way that makes the whole shirt look blurry, like you're having trouble focusing. It's not terrible, but for me it's more disconcerting than soothing. Still, he knows just when to deploy that lovely chartreuse paisley, and the brown pants are a solid base. It's a thumbs up overall.

How are we already here? HOW ARE THEY HIDING PHYLICIA'S (recent) PREGNANCY THIS WEEK? 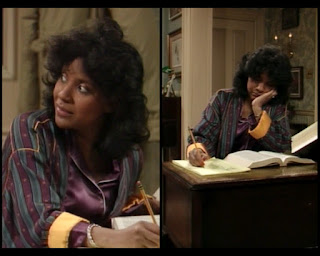 She only has a few minutes in which to get out as much crazy eye as possible.

As usual, by exiling her to the final few pajama-ed moments of the episode. Also, by putting her behind the desk that they moved there when she got pregnant in the first place. 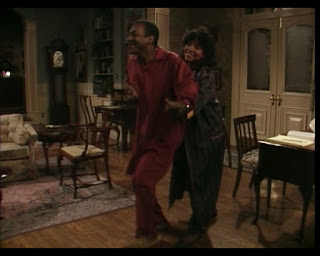 Put that magic spell on me, slap that baby, make him free!

Also, with awkward dancing. At least Clair is standing up again. It's been a while.

Rather than ending with a donation link, I'm asking a different favor of you all. Tempestt Bledsoe was recently alerted to the existence of this blog by an interviewer (thank you, Jeffrey Jameson, for making that happen), and I want to make sure that she actually reads it. She might not like it, as there have been many days when I have torn her sad outfits to shreds, but I still want her to check it out. So if you could remind her by sending a tweet to @TempesttBledsoe with my URL, I'd be oh so grateful. Also, watch her new show, Guys with Kids, premiering on September 26th on NBC.

The end. More Hotness next week, guys. Until then.
Posted by Unknown at 8:00 AM