Season 3, Episode 16: Denise Gets an Opinion

This week's episode is about how men are falling all over themselves to date Cliff's daughters. OK, that's not precisely true, but there are seriously five male guest stars who are all at least mildly flirtatious with either Vanessa or Denise. The plot gets a little convoluted, so I'll just explain as we go. 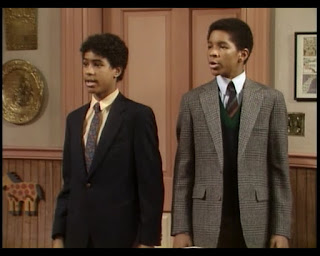 Remember Tyrone and Aaron from episode #3.11? Vanessa is apparently still going on dates with both of them at the same time. And as before, the sense I get is that these two are in it for each other. When the trio goes to see a movie, the men stay behind and Vanessa comes home alone. Giant red flag, honey.

If you're wondering why they're dressed so nicely for the date, it's because they both joined the Huxtables at church this morning. This is the first overt indicator of religion we've had on the show: while it's assumed that the family is Christian, we've never actually seen them celebrate a holiday or heard them mention their faith in any way. I'm not making anything of that, but it's interesting to note.

Starting with Tyrone on the left there: he's got solid instincts, but he needs to refine them. When you're wearing a black jacket, you have a great deal of leeway in where you can go with your shirt and tie, and I would definitely steer anyone seeking advice toward livelier hues and prints. That said, you can't just throw any two candy-colored pieces together and hope for the best. The point at which this stops working is really the scrubby pattern on the tie. If it served up only purples and blues, then he might get away with it, but I'm seeing a whole rainbow in there, and it's messy. Also, that blazer doesn't fit at all; I assume it was purchased as a "he'll grow into it" item.

Aaron's blazer reminds me of the one Russell often wears, and also of the one worn by the dude hitting on Clair in episode #2.9, but it's more gray than either of those garments. I guess this was a popular style of jacket in the '80s. Anyway, he looks a little more pulled together overall: the navy establishes coherence between the sweater and tie, the accent colors complement each other nicely, and it's hard to go wrong with a crisp white Oxford shirt. He'd be the clear pick for Vanessa's dating future if he wasn't so obviously crushing on Tyrone. 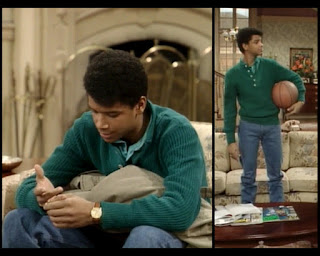 He bothers literally every person he talks to.

There's another man vying for Vanessa's affections, however. Robert would like to give going steady another shot, and he hangs around the house all day pestering the family for advice. I have to say, I'm feeling that emerald sweater. The color is gorgeous on him, the burst of paler green at the collar is just right, and the ribbed texture just makes him look so cozy. I'm even into the big white buttons. This outfit says, "I'm sensitive, cuddle with me." (Ignore the basketball, it's Theo's.) In a perfect world, the jeans would be a little darker and perhaps a little slimmer, but they're fine. It's a shame he gets rebuffed, because he tries so hard! Also: actually heterosexual. 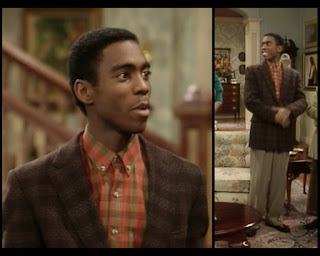 More of an appetizer than a main course.

Here's where things start to get complicated, plot-wise. Cliff is having a resident follow him on his rounds. Denise is expecting a date with whom she's only ever spoken on the phone. So when this dude shows up in the living room, all the kids assume that he's a romantic interest when he is, in fact, one of their father's colleagues. Jerry the resident is played by Tico Wells, who has built a solid career out of small roles in movies and guest gigs on TV shows. Nothing from his credits really stood out to me as something you'd certainly recognize him from, but he's always working, so there's that. His clothes are also working for the most part. The blazer and shirt play off each other impeccably: they're risky but not ridiculous. Orange as a highlight in a sea of earth tones is just plain smart. I also appreciate that he's going for the buttoned top button, which is way coming back. Look at those One Direction moppets. Obviously, tailoring is sub-optimal because of the time period: it's getting a little zoot suit-y in here. But if these garments fit him, I'd be 100% in support of his choices. 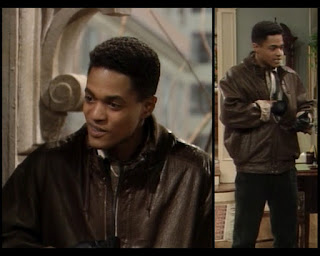 I was worried after Denise got her hopes up about the med student that her actual date couldn't possibly compare, but this dude is mad handsome. And tall. And polite. If only he could dress himself! The character, Greg Martinson, is played by Don Franklin, who had his greatest success as a series regular on SeaQuest 2032 as Commander Jonathan Ford. Just to recap what he considers appropriate for a first-time meeting with Denise Huxtable (a woman to whom you present your A game because, I mean, come on): comically large brown leather jacket, black leather gloves, black pants. The shirt underneath, which gets almost no screen time, is striped or something, but who even gets that far? When you're tall and slim, it can be difficult to find items that flatter your body, but you have to keep trying, because when you don't, this happens. "Hi! I'm wearing a slip cover for a love seat! Care to join me for dinner?" This dude is lucky he's so dreamy in the face, I tell you what. 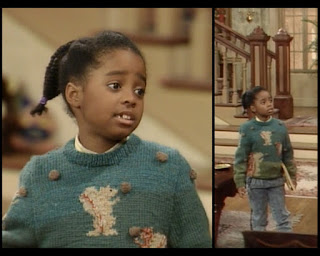 Growing up, sassing out.

I sort of just now put together that Rudy is probably wearing weirder sweaters because Clair isn't around as much, and Cliff is helping her pick out her clothes. I'm on the fence about this particular piece: on the one hand, it's a cute visual pun with the pom poms becoming little acorns for the squirrels, but on the other hand it's chance for her to be wearing a top that could be described as sporting both "balls" and "nuts." (I'm juvenile, but I'm certainly not alone.) More concerning than that, however, are her jeans, which are bunching really horribly just below the waist. That horizontal crotch fold persists throughout her scenes, suggesting that  if it's not intentional, it's nonetheless permanent. And acid wash? Her pants fail on multiple levels, which is sad for someone so young. 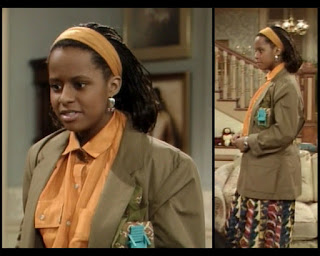 Adolescence is a rough time.

If I'm reading contextual clues correctly, then Vanessa wore this to church. I don't know, it's tough for me to envision a setting in which this would be the best outfit, but church is pretty low on that list. Before we touch on anything else, I want to be very clear that her brooch is a deck chair. Like, a small, detailed replica of a deck chair with individual slats and everything. I'm so completely at a loss about how to even begin discussing that. The next point we need to address is her skirt. We were first alerted to the existence of this threat to decency in episode #3.7, but today we witness its full power unleashed. Something about it says "artist's drop cloth" to me, except that it's obviously adhering to a more rigid pattern. Which I guess implies that thought went into its construction, though really anyone who thought for more than a moment about this garment would have to think, "no, never mind, let's just burn it," wouldn't they? Confusing. I guess she's doing alright with the shirt and jacket, which have a Clair-at-the-end-of-a-bad-safari feel to them. But I'm probably just inflating my esteem for the less-terrible parts of her getup because of the blinding horror of the rest of it. 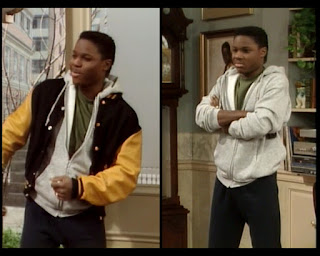 We are so in a fight right now.

Did Theo lose all of his good clothing in an extremely localized fire? What the hell is going on with him this season? 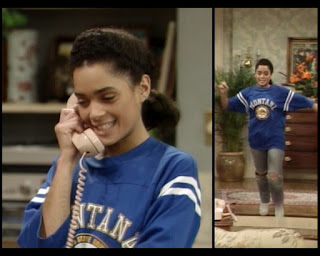 Why do I adore this yet loathe Theo's look?

Before her date, Denise is just lounging around the house looking casually flawless. In the same way that Robert plays the snuggly card, she presents here as the kind of girl you'd just want to hang out with all day. Watch a movie? Sure. Order take-out? Absolutely. Get dressed and go somewhere? Hell no, son, you're at home with a queen and life is good. If she went out to a bar like this, she'd leave with all the numbers. 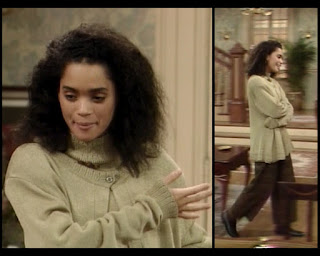 While I can understand changing for a first meeting, I can't understand changing into this. Her selections here are oddly half-assed. She has more bohemian items in her wardrobe, and likewise has things that fit closer to the Martha Stewart vibe she's simultaneously rocking. But the two aesthetics don't merge well, and so she's left sitting there like a khaki lump. If you're going to wear a nice sweater set, then go ahead and have it fit properly. I'm all about a sleeve that runs past your knuckles, but not on any old top in your closet. The pants also feel slouchy to me. I guess maybe her thought process was to seem fashionable but comfortable, but her outcome is straight-up cat lady. 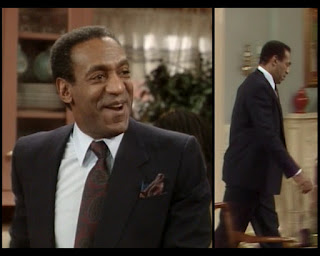 Jesus is apparently not having it with the zany knits. 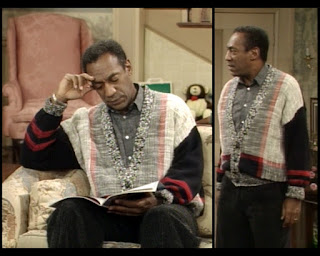 Cliff's second outfit is all about texture. Other than those incidental red bands, he's really just figuring out all the different ways he can use static as a thematic design element. So much speckled, heathered gray and black! It all coheres well enough, though the pants would look linty if the rest of the outfit didn't highlight the intentional nature of that pattern. The doctor enjoys skating on thin ice, though, so the flouting of pants standards is to be expected. It's another configuration that perhaps only Bill Cosby could wear, but that doesn't immediately count as a bad thing.

And now, your favorite: HOW ARE THEY HIDING PHYLICIA'S (recent) PREGNANCY THIS WEEK? 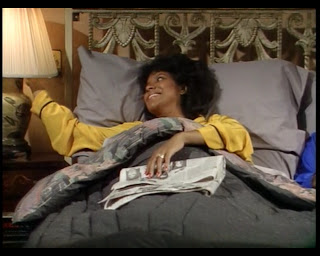 No one has ever been happier to turn off a lamp.

By including her only in the final segment of the episode, during which she is buried under a giant comforter and a newspaper. The scene is lovely, though, because she serenades Cliff to sleep, and Miss Phylicia can sing. On the other hand, I feel pretty cheated that she wasn't depicted in her morning attire. Does Clair Huxtable have a church hat? Because I think we can all agree that America needs to see that.

Before we close, I'll issue my usual plea: if you regularly enjoy this blog, then consider donating a quarter in the tip jar. Your money helps keep the site going. I promise not to use it to buy expensive jewelry and gaudy knick-knacks.

Come back next Monday, I'll have more hotness for you.
Posted by Unknown at 8:00 AM