When Clair gets invited to Hillman College to participate in an event, Cliff asks his father to help him manage the household in her absence. Theo receives a sudden burst of attention, including cryptic phone calls, from the women of the school when he is named "Thoroughbred of the Week" on the bathroom wall, but this repeated sexual harassment holds little interest for the family even when Rudy and Kenny overtly debate gender politics in the living room. Mainly, it's an episode about Dad and Grandpa and their relationship, so everyone else takes a backseat. 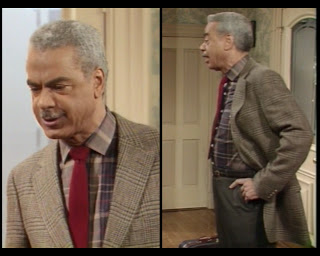 I get the feeling that new costume pieces for Russell are a low priority.

Russell first appears in his episode #2.23 blazer over the collared shirt he partially displayed in episode #3.6, plus a solid tie and some moss-colored pants. This getup seemed just fine to me at first, but the closer I examine it, the more I feel like it's not happening for me. Contrasting plaids can work, but the underlying khaki in both of them makes it a tougher sell. I love the blue and red, especially when highlighted by the matching neckpiece, but the individual garments don't differentiate well enough when their patterns are in the same tonal range like that. The trousers, on the other hand, are too dissonant: with competing prints on the top half, do we really need a new color family introduced downstairs? Maybe brown would have been the way to go? It's not that he looks bad, but that the inconsistencies build to form a general sense of unease in one's brain. Doesn't his outfit give you that eerie feeling, like when you realize that a painting's eyes have been following you around the room? 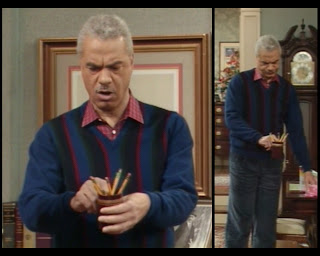 This shirt/sweater combo was first seen in episode #2.3. It looked better last time with the khaki corduroy to support it; these slate blue pants clash with the cobalt knit. 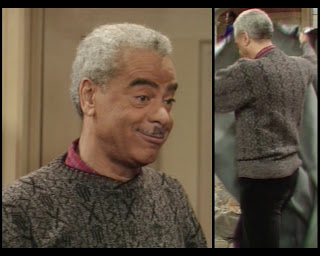 Russell must not have packed enough clothes for his trip, because he repeats yesterday's shirt and borrow's Cliff's episode #3.5 sweater. Unless maybe he and his son own matching outfits. They might be cute like that. The black pants (which may or may not be Cliff's as well) are the right choice here. Grandpa Huxtable is best when he's not trying for showiness. That said, I think he does best in earth tones. 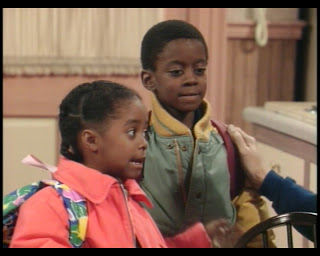 They're here, they're dear, get used to it.

Kenny's back, everyone! But he spends the whole time in this coat, and really I don't expect that I'd have much to deconstruct about his fashion choices even if I could see them. Rudy wears two outfits, but they're both repeats and who even cares? The point is that these two are wonderful together and you should be watching them bicker instead of reading me make snippy comments about their sleeve lengths. 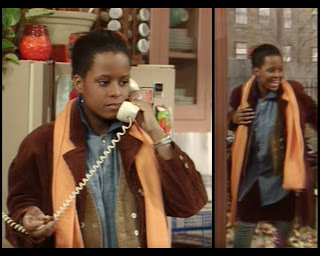 Since the kids get relatively little screen time this week, it was hard for me to capture their creations. What I can say for sure about Vanessa's look in this scene is that she has continued her proud tradition of stealing her older sister's clothes: that's Denise's episode #3.2 vest. What concerns me more than her kleptomania, though, is the area near the collar of her shirt. Look closely with me and tell me if I'm seeing what I think I'm seeing. Right above the button, there's a sort of break or seam, and then from that horizon emerges a collar that is slightly darker than the rest of the shirt. Was that piece sewn in separately? Is she wearing two different blouses layered over each other? And if so, does the top one officially have the grossest neckline in recorded history? Her lower half is easier to comprehend, at least: black skirt, gray leggings. Her real problem is that the leggings don't fit right and are clearly bunching. Truthfully, the only thing I fully accept about her entire outfit is the color of her scarf. The rest needs hefty triage. 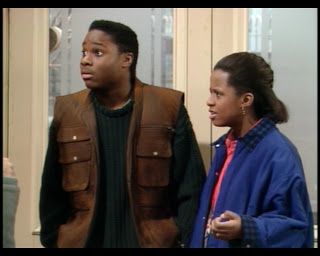 I understand why you wouldn't make a big deal out of these outfits.

She and Theo appear briefly in the entryway at the end of the episode, but this is really the only angle we get of them, so I'll take them as a unit. Vanessa is wearing pink, but that's all we'll ever know for sure. Her brother has redeployed his swamp vest from two weeks ago, and it's only gotten greasier and grimier in the interim. I'd encourage him never to explore the contents of its many sinister pockets. 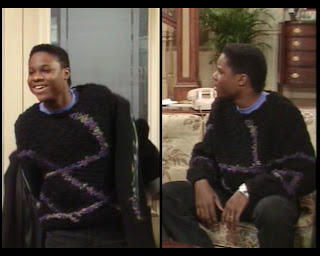 I call this one the "Trail of Tears."

Theo starts out in this frightful bathmat of a sweater, letting you know right away that any romantic attention he's receiving must be the result of deception or confusion. I don't imagine that people are capable of feeling lust in the presence of this texture. I'm drawn to the daring squiggle that shoots randomly around his torso: it's unexpected and injects a vibrant, springy palette into the sea of black. It's a concept that I'd like to see revisited somewhere other than this outfit. The size and knobliness are too much for me to overcome at this moment. 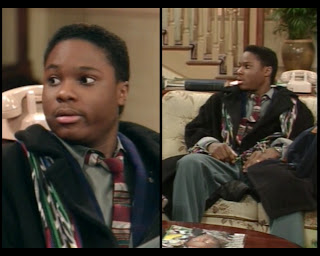 He's taking up way too much couch.

Yet another outfit given almost no coverage. How could the makers of this show not have anticipated a world in which a nobody would have the opportunity to document and dissect each item of clothing for a global audience? Play the long game, people! Anyhow, what I know for sure is that the blue blazer beneath his overcoat is neither the one from episode #3.6 nor the one from #2.18. How do I know this? Because it appears to have a subtle plaid in it, which neither of the others displayed. I'm tempted to say that the pattern would make the piece sparkle, but it might also make it ugly. A view of the whole jacket is necessary for a final judgment, obviously, and we're not offered one. Otherwise, he's leaning a little heavily on the dirty mint shade (pants or shirt, not both, Theo), and horizontally striped ties seldom work for me. 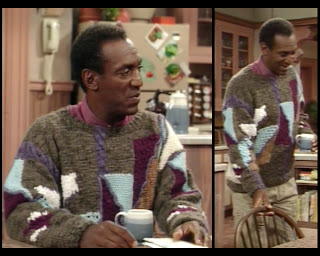 This is the first of four looks for Cliff, and he lifts off full-tilt with this A-grade Cosby sweater. It has all the elements: asymmetry and other disorganization, the pairing of multiple textures or textiles, contrasting or clashing colors, and the nagging suggestion of possible sentience and even malice. The application of that sky blue yarn in two different stitches, which disquiets the viewer by making it impossible to know what to expect, is an expert touch. I also want to draw your attention to the way that the purple braiding interjects occasionally to section off parts of the garment, adding to the Frankenstein's monster impact. The rest is standard for the Doctor, but this is an impressive offering from his extensive collection. 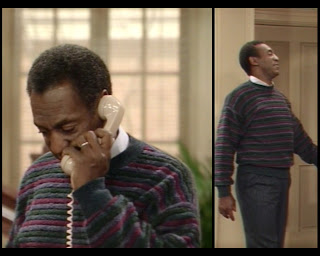 Loud is his lowest setting.

Not wanting to diminish the strength of another high-quality sweater, he follows yesterday's look with something more subdued. The colors divided by thin black bands remind me of what I saw as a child when I put my face right up close to the television screen to see how the image was made. (Did anyone else do that? Is the resulting brain damage from such an activity to blame for the existence of this blog?) To keep things lively, he contrasts the horizontal top with vertically striped slacks. Drama and intrigue at every turn with this man, huh? I'd call this solid but unremarkable: it has the guts to make me notice it, but not always the underlying taste to keep me smiling. 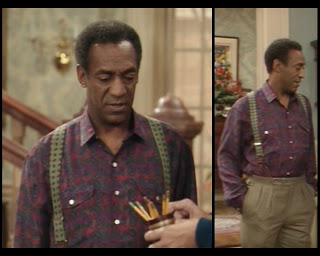 This is Cliff at his rule-breaking best, throwing paisley over paisley and color over color to deliver a brash yet beautiful creation. The ruby and amethyst shades that dance across his torso and arms help the chartreuse suspenders to pop, but the whole thing never feels as untamed and dangerous as one of his signature sweaters. This is how risky fashion should be done: like a controlled nuclear test. Innocent bystanders feel uneasy about it, while trained professionals eye it hungrily, anxious to see the results for themselves. With so much going on elsewhere, the khaki pants seem like a given. The pleats are also unfortunately an assumed part of the package, even though they are abominations. 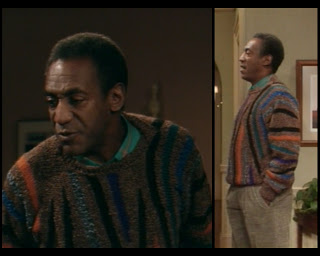 Lurking in the shadows like a beast stalking its prey.

Tigers need to think outside the box more often. Why are all of their stripes black? Would a little teal kill them? What's the point of camouflage, anyway? Shouldn't we be trying to stand out instead of blend in? Obviously, the laws of the jungle and the laws of fashion can differ greatly, but they intersect on this one point: multicolored tiger print is a bad idea. The shirt underneath might be awesome, though; the close shot (which unfortunately happens in low light) suggests that it's a turquoise with yellow plaid overlaid, which might be wonderful. I chose that dim view, however, because it gives us the best perspective on what I believe is an asymmetrical neckline. Does one side come to a deeper, weirder point than the other?Is that a false perception, or even just a flaw in the craftsmanship? Unfortunately, this is a week of mysteries and vague hopes. It's a metaphor for our life, during which we wander through darkness, given occasional hope by vague glimmers of truth - we yearn for, but seldom receive, complete and unobscured answers.

That's right, everyone: your time watching the Huxtables as a child instilled you with indelible angst. Let it sink in.

Or, skip that nonsensical rant and wonder HOW ARE THEY HIDING PHYLICIA'S PREGNANCY THIS WEEK? 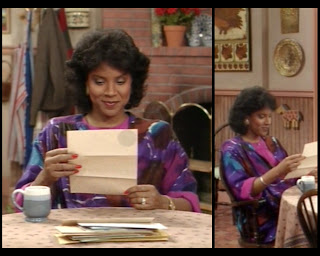 With a letter that takes her away after the first scene. Bye, Clair! This is a repeat of her outfit from the season premiere.

Oh, and one more piece of business: the comment section has been getting a little hairy lately, so I've turned moderation on, meaning that I have to approve your message before it is shared publicly. It's a measure I've implemented, hopefully on a temporary basis, to prevent people from bickering among themselves under these entries. There are plenty of other places on the internet to do that. I plan to let 99% of everything through, and the choice is not meant to discourage participation in discussion, so please keep commenting.