Our adventures, such as they are, continue when Russell brings a friend over to help him best Cliff at pinochle after last season's game didn't end as expected. As the men trade stories and insults, Vanessa prepares for a date while Theo realizes that he doesn't have one. It's a slow news day. 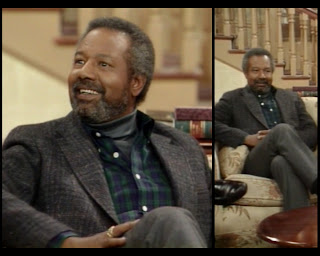 I vividly recollect his efforts to teach Yeardley Smith a number from a
fake religious musical entitled Deuteronomy.

This week's first guest star is Jason Bernard, playing Sergeant Major Boswell Stokes. If you're anything like me, you remember him as Mr. Bracken on Herman's Head. Having enjoyed him in that role, I was sad to learn that he died in 1996, when he was only 58 years old. His final performance was as Judge Stevens in Liar Liar.

He holds an interesting distinction in Huxtable history: when he describes his battalion's capture of several German fighters, he highlights their condescending attitudes toward him and the other black soldiers, thus becoming the first character on the show to discuss racism. Even in this instance, the subject is barely raised; we're talking about foreigners from decades ago rather than modern-day compatriots. There's certainly room to explore the racial dynamics of this series, and though I'd be interested to read about the topic, that's not my jam. I write about clothes.

His overall vibe aligns well with what Russell typically throws down. He's keeping things a little more formal without seeming uptight. Using a subtle plaid in the blazer over a bolder plaid in the shirt shows bravery, and the turtleneck underneath further softens the look. I'm generally by the colors up top, but question the decisions to match gray pants with a gray jacket and gray undershirt. The navy and green aren't punchy enough to be the stars of the show here, so a monochromatic surrounding to highlight them wasn't the best choice. Plus, that puts us back into the well-worn territory of pairing shades that actually aren't the same shade. Tan slacks wouldn't have killed him. 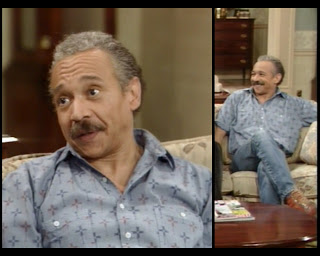 He's a no-good heart breaker. He's a liar and he's a cheat.

Russell's usual card partner Homer returns this week. His vibe is much more laid back. Beyond the fact that he's sporting jeans rather than dress pants, he's also delivering fewer layers in general. The lightweight fabric gives him a breezier air than the heaviness of the Sergeant Major's attire. As we just touched on (and as I have said many, many times), I'm pretty particular about color combinations. If they're not exactly the same, then they should be significantly different. This shirt, in my eyes, is too close to the denim tonally. That said, the subtle pattern is fabulous and the shoe is probably divine. The tan is just right, but I'd need a closer look to know for sure. Never underestimate the ability of a person in the '80s to ruin a perfectly good article of clothing. 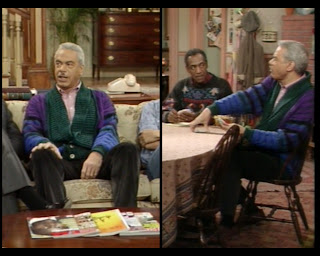 Don't trust a man in an ugly sweater.

I'm almost always on Russell's side sartorially. He has a good eye for pieces and juxtapositions that are mature and yet exciting. This cardigan, however, is too far overboard for me. Color blocking has its place, but this isn't it. You can't do a sharp geometric on something this loose; it just highlights how sloppy the fit is. I also have doubts the three shades being used. Maybe a green and two blues would have been better, or even just varied greens with a pattern of some sort? When he first walks in and he's wearing a coat, all I could see was that fabulous emerald collar, and I had such high hopes. Shattered! The big buttons give me pause as well. This is a miss, I'm afraid. His foundation of pink shirt and dark trousers is unassailable, at least. 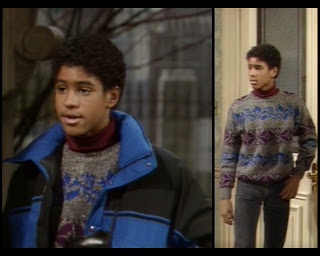 It's completely possible that he now has a child who dresses just like this.

We also have a younger generation of guest stars. Meet Tyrone, played by Jason Warwin. His two episodes of The Cosby Show are his only screen credits. The outfit he's wearing is nothing special, but it's totally current. Notice the tiny jeans and the wintery knit. I feel like these Grandma-made-it-for-me sweaters had a real moment recently. You could go to a New Year's Eve party at NYU and probably find a dude dressed like this. Or a lady; it's a unisex outfit. I want to give a special shout-out to his crimson turtleneck, which ties in with the diamonds across his chest and also frames his face with something more flattering than a drab gray. 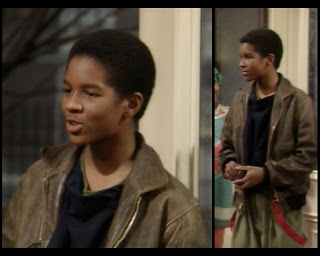 Things will be different once Vanessa starts dating post-pubescent dudes.

Unfortunately, Tyrone has some competition in the form of Stokes' grandson, Aaron. The actor is Ermundo Russell, who has the same number of screen credits as his competitor for Vanessa's affection. He ekes out a small advantage by also having provided a voice in the children's choir of The Wiz. This outfit is definitely intended to position him as the "bad boy" option: compared to Tyrone's tiny, conformist attire, Aaron gets a rough-around-the-edges, slouchy ensemble. Conveying the fit of those pants is difficult in a still frame, but if you saw them in motion, you'd probably like them. They're different and risky in a way that evokes some of Denise's flair. Giving him a leather jacket is a little spot-on in terms of implying rebelliousness, and as I pointed out in episode #2.14, I really hate this method of almost wearing suspenders. He's trying too hard for me to fully support him. Everything looks fine, it's just all a little presentational.

Another side note: when Vanessa's boys decide to both go on the date with her simultaneously, it's supposed to read like she gets two guys instead of just one. To a modern audience (or at least this modern audience member), however, it came across as though the two were going on a date with each other, and she was just the third wheel. The times have changed. 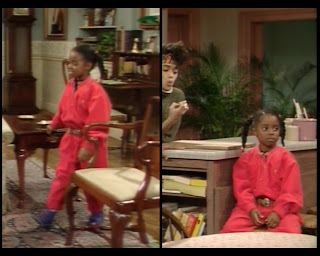 Somewhere between Strawberry Shortcake and 1984.

And on to the Huxtable clan. Rudy is throwing down her own take on Denise's flight suit from episode #2.15, and I have to say it kind of works. Her vision is more intense in terms of color choice, but she mitigates that by wearing fewer accessories. Though I might have gone darker with the belt to give more contrast, I applaud her restraint in avoiding other flourishes. She also brought back last week's purple boots, which I of course consider to be a wise decision. This isn't the kind of thing that most adults could pull off, but it's perfect for a kid. It's splashy and endearing and still seems like it was designed in a utilitarian fashion, as if it's supposed to get dirty and torn. We should put all of our children in coveralls. If I ever have little ones, there's a good chance that they'll spend the colder months dressed like a squadron of technicolor mechanics. It just plain makes sense. 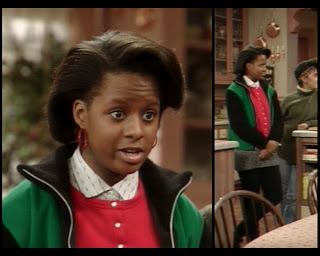 Vanessa has enlisted Denise's help in creating an outfit for her date, and this is what they came up with. I see where they were headed, mostly. Eschewing her usual pattern frenzy for solid tones, she get color blocking right (take note, Grandpa) by defining the various zones of her body the same way you might paint a solid wall two different colors to denote a division in the room. She has a sort of young debutante groove going with the high-necked cardigan with the tiny little buttons, and that's usually a solid option. My main concern is the skirt, which seems too short even with leggings beneath it to prevent outright indecency. I'm surprised her father hasn't intervened. 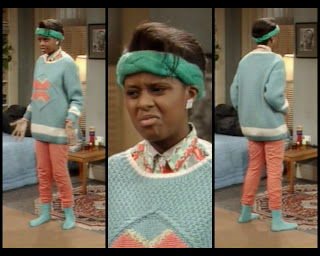 Before Tyrone arrives, however, she has a change of heart and throws this on. These pastels are squarely in Florida retiree territory, and I can't imagine what they're doing on someone her age. She was better off with the richer hues in the previous look. The sweater is chunky and junky, the shirt underneath it looks messy next to the solid knit, and the green headband has no place in this color story. I'm going to reassure myself that her pants are rolled up because she's about to try on skates, because if she thinks that she's supposed to wear her leggings like that, then the situation is worse than I thought. Bear in mind that Denise is still helping out here, so I have to give her partial blame for every misstep, and I hate doing that. Anyway, though this ensemble is more coordinated and cohesive, it's less fashionable. Bad call. 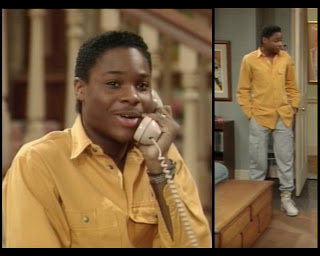 I hope you're calling a personal shopper, kid.

Speaking of letdowns, Theo's here to remind me just how thoroughly he's given up on ever making me smile again. The best I can say is that the goldenrod shade of this shirt is attractive on him. Beyond that, I want him to tuck it in for Lord's sake, but not into those hideous pants, which are themselves tucked into thick yellow socks because of Cockroach's bad influence. Did he throw away all his nice clothes from the first two seasons? I just don't get it. 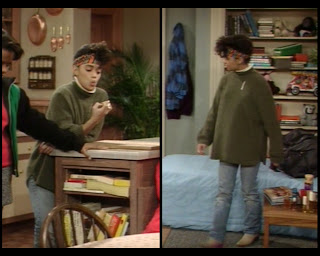 And the parade of broken dreams continues. This just plain hurts. Everything from the waist down is alright, but then she mushrooms out into the ugliest top she's ever worn. I don't even want to talk about it. I'm going to chalk this up to her being so selfless in her attention to her younger sister's outfit that she didn't even have time to consider her own. She's like Mother Teresa. 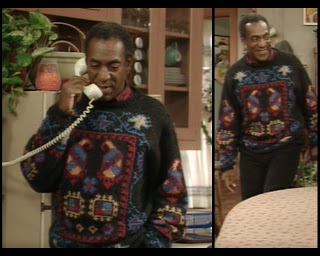 Don't cancel Theo's personal shopper! I can't take another week like this!

Cliff looks bizarre here. His decision to match the black-based sweater with black pants turns the rug-like design into the only thing worth observing about his clothes. The details become a sort of yarn tattoo. And if you don't like the graphic he's serving up (which I don't), then there's nothing else to latch onto. Thus, I have no choice but to give this a failing grade and move on.

It's been a rough week for clothes, and it won't get better, because all that's left is HOW ARE THEY HIDING PHYLICIA'S PREGNANCY THIS WEEK? 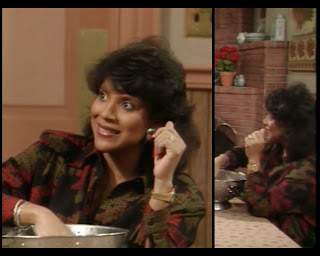 Snapping peas gives her the mania.

With a table, her episode #3.7 shirt, and a whole lot of crazy eye. She's preparing a dinner that they never cook or eat, mind you, and then she's gone after this scene to teach a class at the community center. The writing suffers when Clair isn't given the opportunity to fully participate, and I long for her return to real clothes and non-stationary acting in season 4.

And that's that. As always, the tip jar is out. It's officially been a full year since I began this project, which I can hardly believe, and some of you have been reading since the beginning. Thanks so much for sticking with me on this epic, insane quest. If it's been worth a dollar to you, then the little yellow button is right there. But publicity is just as important as cash, so if you want to help without spending anything, then please use Facebook, Twitter, billboards, bullhorns, and any other media outlets available to you to let people know that you enjoy my blog. All assistance is appreciated.


And that's that. Onward to the next two years of Huxtable fashion review. Good times.
Posted by Unknown at 8:00 AM