Opportunity strikes! The two most popular girls in the eighth grade want Vanessa to help them write cheers for the pep squad. This is her chance to become popular, which at her age seems like the only thing that could ever matter. However, she makes trouble for herself by trying to impress her new friends with the amount of money Clair paid for her painting at the auction. When two other pep squad members call Vanessa "rich girl" at practice, a scuffle breaks out, and Cliff and Clair have to explain some things to their daughter. Rudy, who is too young to understand class warfare, plays checkers with Theo. 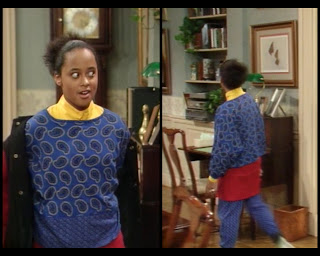 This is Paula Young, who seems like the Queen Bee. I mean, look at all the attitude she's serving up. That's a lot of eye roll for a girl who shares her name with a mail order wig company. The actor, Essence Atkins, has gotten steady work in television and film since she began her career on this very program. You may have seen her in recurring roles on Under One Roof, Malibu Shores, or Half & Half, or in movies such as Deliver Us From Eva and Dance Flick.

I'm amazed that this is how the costume department dressed the most popular girl in the class. She's delivering primary colors (my least favorite combo) and they're configured in a manner that would be more appropriate on a faraway planet than in a Brooklyn residence. The layers are impossible to comprehend; I'm surmising that the shirt is yellow at the collar and sleeves but then transitions to red somewhere in the middle, but it's entirely possible that the band around her waist is its own garment. No matter what the situation there, it's undeniably ugly. It's even styled poorly: unbutton that top button! And beyond that, she's doing distressing things with paisley (while pairing black with too dark a blue, I might add), and then she's got those sad, scrubby pants on to finish the job. And by "the job," I mean "making me ill." 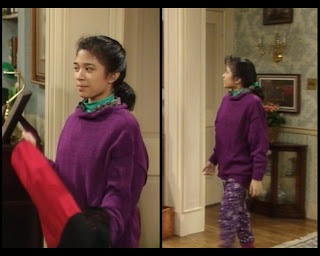 Looking around for something to judge. The mirror is over there, honey.

The Gretchen Wieners to her Regina George is Cindy. Ana Monet exists on the IMDb only for this scene, but one can hope that she went on to bigger and better things with her life. Apparently, in their little gang, it's all the rage to match your gross overlarge top with a gross pair of pants. You should have a garish print in there somewhere, too (Cindy's mixing it up by putting hers on the pant), and then maybe you throw down a contrasting color near the neckline. The amethyst/teal situation she's working with is actually alright, but everything else falls apart completely. She looks so burly in that sweatshirt, and then there's that tri-collar effect at the top that basically makes it seem like her head is hatching from a fabric cabbage. I've gotta say: I'm not convinced by these presentations. Nothing about their appearance says "everyone wants to be them." 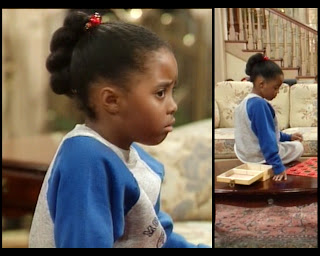 Skeptical. She knows I want to ignore her completely.

As usual, I'm dropping in a picture of Rudy only because I feel bad overlooking her, but I have nothing to say about a two-toned sweatsuit. 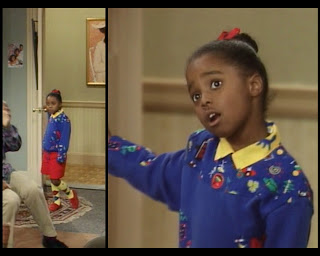 This outfit isn't terrific, but that pose sells it. While I just vetoed primary colors a couple paragraphs ago, I make allowances for people whose age is in the single digits. Same for the use of multiple patterns and other whimsical embellishments. As an overall ensemble, I admit that this is another over-the-top, someone-needs-to-tell-her-that-less-is-more scenario. But she's draping her body like she's part of an editorial spread in Italian Vogue. The droop of the shoulder! The careless dangle of her left leg! The jut of her tiny hip! It's not all the way there in the close-up, but I live for that long shot. Another point in her favor: you can't lose with sensible shoes in assertive hues. (Yes, I'm rhyming now. Deal with it.) 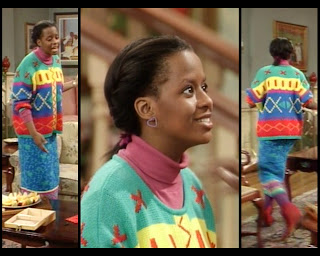 Vanessa's plan to win over the popular crowd apparently involves overloading their neural pathways with visual signals until their weakened minds become susceptible to manipulation. Seriously, the amount of different crap happening in this outfit means that these pieces have essentially been weaponized. The worst part is that they may have been created as a set, judging by how closely the colors align between the skirt and sweater. One can only assume, then, that the use of assault-grade casual wear was not isolated to the Huxtable household, but was rather a widespread phenomenon. How did society survive the onslaught? Getting out of the dystopian fantasy and back to brutal reality, let's look at some important details. First, that turtleneck brazenly defies reason by adding an entirely new shade to an already overblown clothing configuration. Second, the purple tights and red boots (I know I just congratulated Rudy for red shoes but this is different and you know it) would be too much in an all-beige setting, and are downright outrageous here. Third, those purple heart earrings might be stealth adorable. But really this is a head-to-toe nightmare. 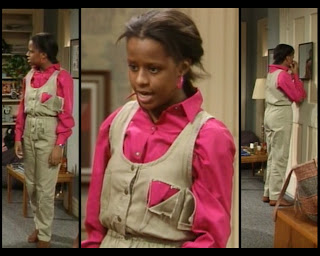 Violence and poly-blend are not the answers, Vanessa.

There's a way to make overalls work, but this definitely isn't it. I'm ignoring Vanessa's disheveled state of affairs because this scene takes place after she's been in a physical altercation with two classmates. But fisticuffs don't explain why that elastic band was placed just below her ribcage instead of someplace more flattering. Her proportions are completely ruined: her torso shrinks, her butt enlarges, and her still-growing chest becomes prematurely droopy. The only way to tailor this more poorly would be to let Denise try to make one herself. At least her effort to balance the neutral tone with a glaring pink was on target. Heaven knows she needs something to go right for her today. I guess she can always take comfort in all that money her family has. 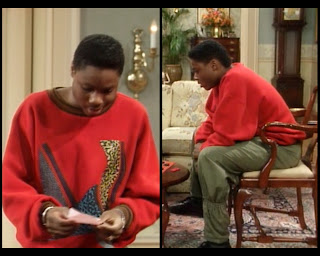 I can't lose Denise, Clair, and Theo all at once. It's too much to bear.

I hate every last molecule of Theo's first look. The pants that gather at the bottom, the dreadful '80s print on the sweatshirt, the Christmas-y palette, the tacky bands at the collar and cuff of his top... nothing about this works. Every time he appears lately, it's a new disappointment. 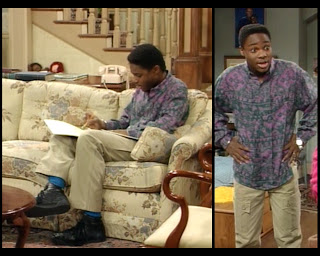 Hypothetical: what if you drank two shades of dye and some ipecac?

See what I mean? Who would wear such a horrendous shirt? I'd be interested to see how that lavender and deep aqua played out in a different configuration, but when swirled together like Jupiter's surface, they're not doing anyone any favors. The pants are fine, I guess, but then he carts out those electric blue socks that are basically a gateway drug to Cockroach's anklebombs. Don't go down that road, Theo. No happiness can survive such a path. Remember the good days back in season one? What happened to us, baby? We had such a good thing. 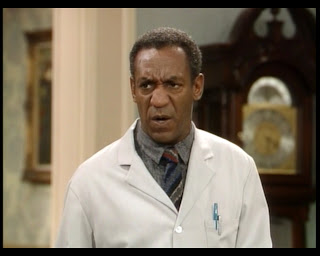 This is his SERIOUS DOCTOR face.

Cliff begins the episode in his work clothes, informing us that he has a tie that's made of... terrycloth? Seriously, that material is so thick he could mop up a spill with it. Maybe an item like that comes in handy in the obstetrics field. That doesn't make it less hideous, however. 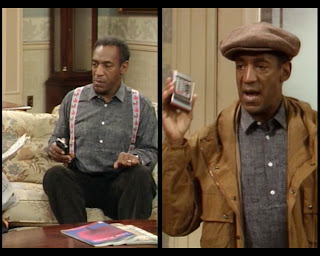 That's not an iPhone, it's a remote control.

He does better when he loses the tie. He does worse when he adds the jacket and hat. 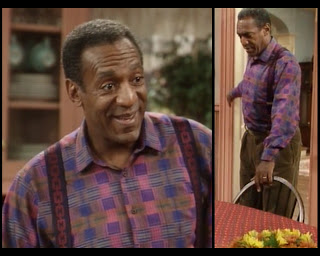 This shirt works way better when considered up close. The subtle variances in and interplay between the various hues come across in a pleasing manner when you're right up next to it. As you step back, the effect loses its mandala-like peacefulness and becomes more circus-y. And since you can't depend on people to only view you at an appropriate distance, I'm going to have to call this one a failure overall. Sorry, Cliff. At least the suspenders are alright. (I'm still a little surprised that "Cosby suspenders" didn't become a secondary cultural legacy, given how often they seem to pop up.)

Say it with me, children: HOW ARE THEY HIDING PHYLICIA'S PREGNANCY THIS WEEK? 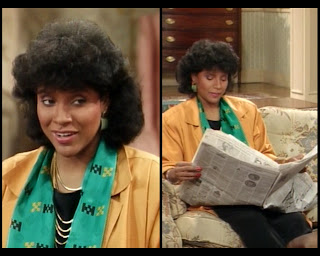 At least this is a plausible activity.

With a newspaper! While I don't love this outfit, it's better than a lot of her other looks this season. She'd have been better off in a richer shade of gold (like the jacket from episode #2.10, for instance), but at least she's abdicated pattern abuse to the younger generation for a moment. 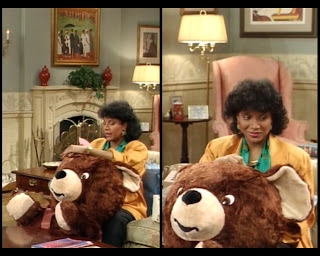 Look at Phylicia's face. She knows this is bullshit.

With a giant teddy bear! The production team is just trolling us at this point. How is this not an outright dare to question them? It's so zealously nonsensical. 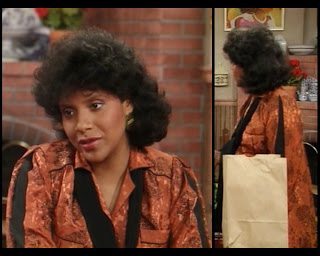 Stop making her do so many errands! Baby on board, people!

With groceries! Don't get me started on this top. It's a grossery all its own. Those black bands are an affront, the shade is dead wrong for her, the speckled print... ugh, I hate everything. Also, blush has become an auxiliary tool in the quest to deceive the audience. As her face starts showing weight, the make-up crew has taken to contouring her cheeks more aggressively to disguise the roundness. Luckily, that amount of shading wasn't reserved for drag queens back then.

Another one down, another... no, I was going to count how many left, but that's a bad idea. We're not even halfway there. I'll be doing this for a while, though, that's a guarantee. Anyhow, if you're interested in helping me continue this fool's errand, feel free to click on the button below and donate a dollar. I'd appreciate it. I'll even send you a personal email letting you know how much I appreciate it! If you don't want to spend money on me (and who would?), you can also help by spreading the word. Tweeting @BillCosby or liking his Facebook page and then tagging him in a mention of the blog would be ideal. If you can't do that, then just tell your friends to read an entry or two. Every little bit helps.


I'll be back next Monday. Hopefully, so will you. Until then, lovelies.
Posted by Unknown at 8:00 AM