Poor Huxtable teenagers: we are forever being reminded that their dreams outweigh their abilities. Inspired by the Tuskegee Airman who makes a speech at school, Theo and Cockroach decide that they want to get licensed as pilots. Though their parents agree to let them go on one flying lesson, they have to face the harsh reality that neither of them can afford future training, let alone a plane to fly. In another corner of the household, Rudy has enlisted a boyfriend the way one might draft a private into the military. 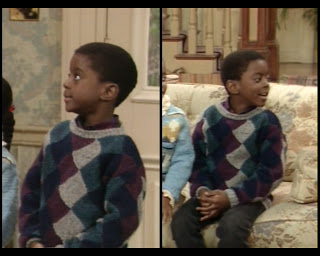 That boyfriend is none other than Kenny, though most of you probably remember him as Bud. I wish there were a way to type that nickname the way Rudy pronounces it. The actor is Deon Richmond, who was about eight when this was filmed. Since then, he's had a recurring role on Sister, Sister, followed by film appearances in Scream 3, Not Another Teen Movie, and Van Wilder. In terms of clothing, he's dressed like a miniature Cliff. I have to wonder if there was a clear intention there, suggesting to the audience that Rudy was subconsciously or even intentionally mirroring her own parents' relationship with her choice of partner. Since sweaters like this are typically only worn on the show by much older men, I can't help but feel as though Kenny should be sporting something a little brighter and more youthful. Then again, he looks nice, so I shouldn't complain. 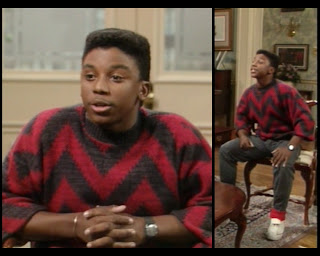 The other guest star today is Cockroach. I'm not bothered by most of what he's wearing, though it's nothing to write home about. The pattern on his sweater adds some visual appeal, but I think it does odd things to his proportions, especially given how formless the torso is and the odd length to which he's rolled his sleeves. The jeans are similarly unworthy of much discussion until you get down to the bottom, where he has done that wretched rolled socks thing again. It's not cute, dude. Let it go. 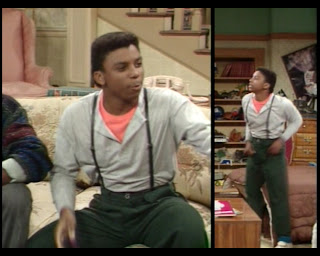 He came so close.

What did I just say? There he goes again, this time with blue anklebombs (which is what I will now call this affront to my sensibilities). These suspenders are from his first appearance in episode #2.15, and the shirt is the same style as the one from that episode, though in a neutral gray. (I think it might be the undershirt Theo wore in #2.19, but really how could one even tell?) I'm loving most of this; the high-waisted pant is a particularly daring choice from him, and it would work even better if he paired it with something other than miniature legwarmers. 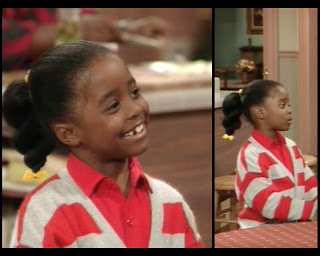 Oh Rudy, you're so adorable and coordinated, but I don't care about this outfit at all. Besides, you already wore that cardigan in episode #1.24. 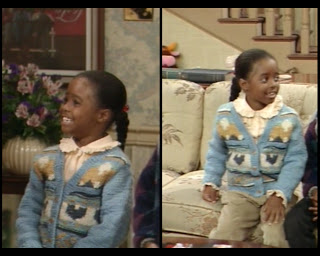 This one, on the other hand, is worth some attention, mostly because of how it aligns with Kenny's look. So much about her reads elderly here, like the frill at her collar and cuff, or the fussy build of her cardigan, or the pastels-aged-in-the-attic palette. The costumers are positioning these two as an old married couple, a dynamic that ends up playing out through their interactions in later seasons. Rudy and Kenny become a conduit for much of the show's discussion of gender roles . Anyhow, I don't care much for this look as an actual look, but as an indicator of relationships and interpersonal dynamics, it's quite effective. 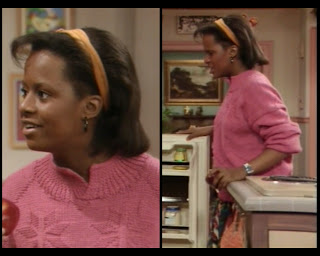 Vanessa appears in only one scene this week. I was inclined to be mildly OK with this (the orange headband clashed wildly with the pink sweater, but it's not terrible), but then that hint of mania at the bottom of the screen alerted me that she's wearing... well, I don't really know, even. She doesn't give us a better look until she walks up the stairs in the background, revealing this: 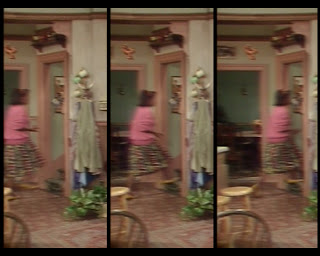 I'm not sure I could withstand the impact of a clear image.

There's still not enough detail to allow me to fully comprehend the damage being done by that skirt, but even at a blurry distance, I can see that it's awful and wrong on every possible level. How could you mar such a wholesome pink sweater with this circus vomit creation? And then your yellow shoes first seen in episode #2.3? I've been good to you lately, hon. Don't do me like this. 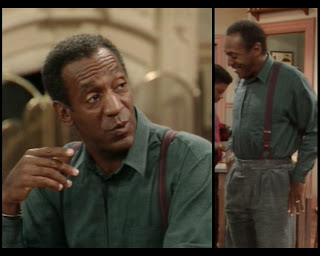 It's not easy (or fashionable) being green.

This is the wrong pants/shirt pairing for Cliff. I don't mind them individually, but they don't differ enough in hue. Suspenders were a mistake in this circumstance, too: a belt would have at least provided a clear break at the waist. He's done better work. 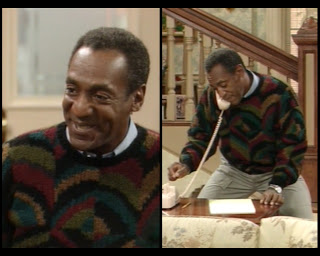 He knows the awful power he wields.

The cargo pants no longer surprise me like they used to. As for the sweater, it's closer in its mind-altering qualities to the garments we expect from Cliff. I like how some of the arcs change color every 90 degrees, while others do not, furthering the hypnotic quality of the pattern. You can't look away even as the offensive color scheme continues to inflict psychological damage. This is the woven equivalent of being immobilized by venom before you are eaten. You know it's happening, but you are powerless to stop it. The Sweater, coming this summer to a theater near you.

You know it, you love it: HOW ARE THEY HIDING PHYLICIA'S PREGNANCY THIS WEEK? 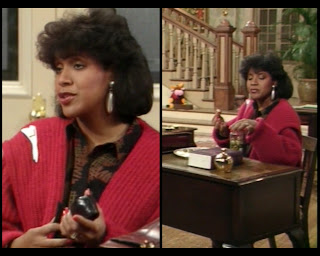 Do not break her shoe. She will not be pleased.

By moving the desk to block her! At least she gets to wear real clothes in this scene. That's her episode #2.7 sweater coat with the pin from #2.4. 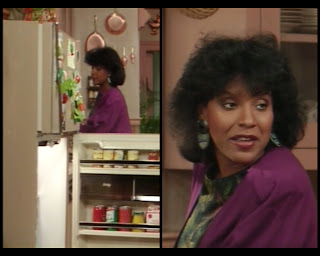 Do let her tell you what the rules are. She loves that.

With a refrigerator door! And more close-ups! And another giant purple top! (This time without stripes!) 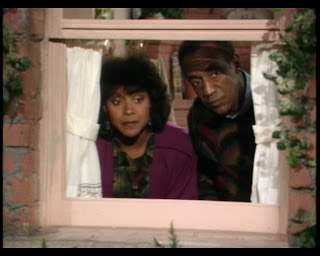 With a brick wall! No one's going to see a baby bump through that. 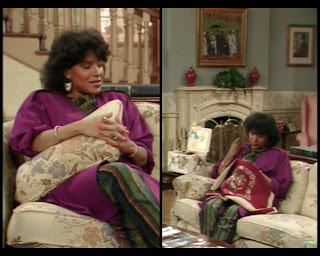 She's clutching that cushion in an almost lascivious manner.

With a pillow! With a sewing project! And what the hell are those striped pants? Everyone was so concerned with making her look regular-sized that they forgot to make her look stylish. Or they decided that "stylish" is something different than it actually is.

Like sands through the hourglass, these are the minutes you wasted reading about clothes worn on television 25 years ago. If you don't consider that time a waste (and you shouldn't: think of all you've learned!), then I hope you'll consider donating to the cause. Think of me like one of those children that Sally Struthers used to schill for, except instead of flies crawling in my tear ducts, I have a hard drive overflowing with pictures of sitcom actors in outlandish sweaters. Just think, your one-time donation of a dollar could help this man get the DVD box set he needs to finish this asinine project he's started.


And even if you don't donate, I'll keep going, because that's how obsessed.
Posted by Unknown at 8:00 AM