When Theo's history paper on the 1963 March on Washington fails to impress his teacher, he is given the chance to rewrite it over the weekend for a better grade. Luckily, his parents and grandparents all attended the occasion and have all convened at the house for dinner. Meanwhile, Vanessa is working up the courage to ask a boy out to a dance. 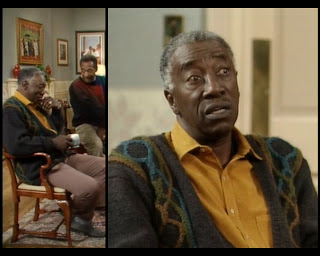 He may be retired, but he can still WORK.

We'll start with Grandpa Al, because we see him least frequently on the show and because he's serving straight-up style. Look at the ochre of that shirt, and how it matches so beautifully with the overlaid woven details on his cardigan. The interplay of that rich, earthy gray-brown with the shots of saturated yellow and mossy green and vibrant blue is just heavenly. But the risks don't stop there: he's giving me a full mauve pant, too. The shoes are as close as he comes to a neutral in this whole creation. I love every bit of it. Never be afraid to turn up the volume on your color choices. Put your khaki and black to bed. You can do better. 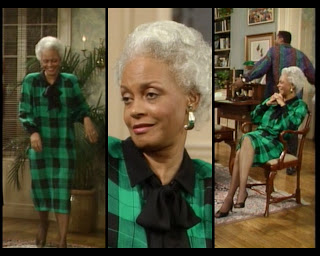 Carrie Hanks is here to let you know that she's wearing a great big pussy bow and you're going to be OK with that. I've previously covered my aversion to that term (in fact, there's a good chance that we're looking at the same bow), but I can't change what it's called. This ensemble doesn't seem like it should work, and yet it does. The garment is completely shapeless, but she's both thin and past the age where one needs to make a huge deal of one's body. There's a hint of vintage inspiration here, with the boxy cut suggesting a 1920s throwback. But other than the unnecessary shoulder pads, it's not a bad look for her. The bright emerald and high-impact plaid liven this up, and the flash of leg when she sits is attractive without being provocative. If the earrings didn't complete the outfit, then the facial expression definitely did. Don't question her taste: she knows her worth. 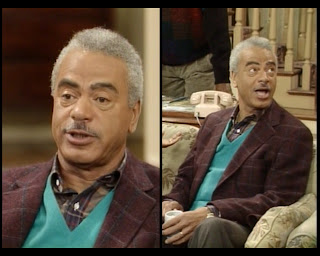 To be fair, I'd repeat an outfit this hot, too.

Russell is redeploying his episode #1.14 outfit with a new shirt. I think the addition of a that particular pattern and palette might have been a mistake in this case, but he remains his usual dapper self. 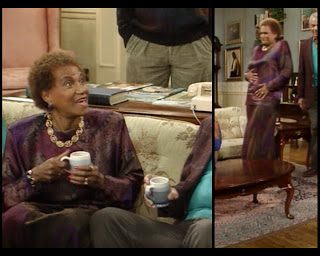 Cliff inherited his crazyface from her.

Anna is also feeling a little bit of flapper nostalgia with her low-waisted frock. (Wait, is it a dress or two matched pieces? Whatever.) The shades of wine give off a regalness, but that mottled texture does nothing for me, especially when it's applied over 100% of the outfit. We're on the right path, but this design needs a good edit before it's ready for prime time. So close! At least I love the necklace as much this time as I did when Clair wore it in episode #2.13. 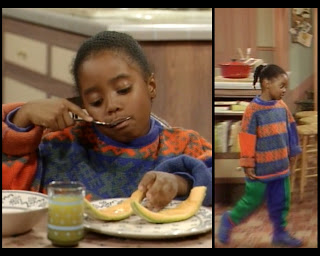 It's not easy being green and blue and orange.

Oh no! Someone dressed Rudy like a tiny clown! Her pants are two-toned, her sleeves don't match, and each of these colors could be found in a Crayola starter kit. Did she draw the patterns for this look herself? It's bad news all around, I'm afraid. 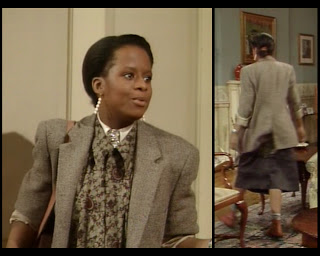 It's one of those proverbial two times that the broken clock is right, I guess?

We just saw this blazer on Randi a couple weeks ago, but I think Vanessa pulls it off well. Similarly, she borrowed the top from Denise (who wore it under a bulkier jacket in this season's premiere), but she's made it her own here. The complex layering juxtaposed against entirely neutral hues is pretty interesting, and it's a new direction for Vanessa. I'm particularly impressed with the hint of awkwardness she's inserted through the odd length of the skirt mirrored against the ankle socks sticking out of ankle boots. The rolled sleeves have a similar effect. Let's look at it without the coat, though. 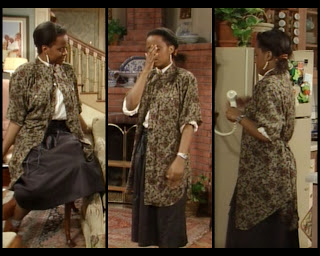 It's a shame she wore her best outfit only to ask him out over the phone.

It's not just me, right? She's bringing her A game today. The shape is classic to the point of antiquity (notice the high neck of her blouse and the faux bustle in the back), but the short sleeves and looseness of the fit inject a little teenage playfulness into the mix. This may just be her best look yet. As in, ever in the history of the show. Remember this benchmark in future episodes when she looks like a walking sale rack. 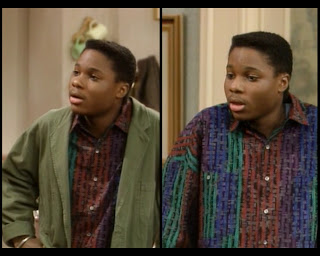 What's the sound of a million heads shaking in disappointment?

Speaking of sale racks, Theo is determined to let me down this season. I'll ruin the suspense for you now: he's wearing black pants. They're barely ever in frame clearly, and they're boring enough that it didn't seem worth it to dig for a passable screen grab. As for this striped number on top, it's a mess. I was inclined to believe that the olive piece on top of it was a jacket, but then he came home in his actual jacket. 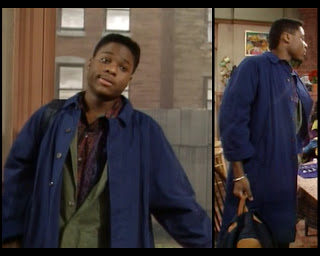 He looks like he's also hiding a pregnancy. And pretty bummed about it.

If the blue thing is definitely a coat, then the green thing is some sort of anomalous intermediary layer for which I have neither a name nor a use. Letdown central. I dislike all of this. 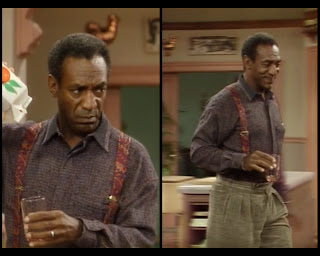 He spends an uncomfortable amount of time trying to coerce juice from Rudy.

Cliff first attempted this shirt in episode #2.4, and I can't say it has improved. He's working hard to support it with interesting pants and suspenders that are pretty lovely, really, but I have to be real here: there's no saving that thing. 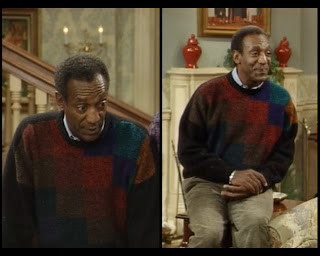 This isn't a Cosby sweater. This is a god damned tease.

His parallel loves of geometric patterns and diverse hues reach a concurrent apex here. The blocks are very him, but the orderly layout and smooth gradient across the middle keep this from going gonzo on us. Sizing is obviously an issue, and I'd be happier if the blend didn't jump irrationally to midnight and then jade right at the shoulder, but otherwise it's a worthy addition to his vast collection.

It's that time again: HOW ARE THEY HIDING PHYLICIA'S PREGNANCY THIS WEEK? 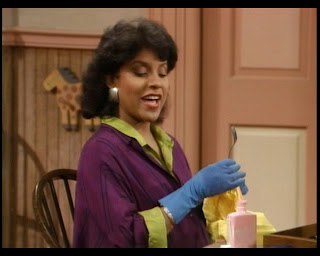 She all of a sudden has a million chores this season.

With sitting! And repetition. (This top is from episode #3.3.) 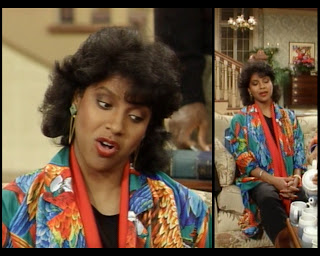 She is a bird of paradise. Or wants to be very badly.

With sitting! And repetition. (This top is from episode #3.2.)

Sorry there wasn't more fashion this time around. You know we're in dire straits when Vanessa is the best-dressed Huxtable. I'll close out, as always, with a donation link. I feel like having a button at the bottom of each entry is somehow better than advertisements, though you might feel differently about that. If you can spare a dollar and think I've earned it, I'd certainly appreciate the contribution.

Until next week, dears.
Posted by Unknown at 8:29 AM