Ermahgerd, you guys. This week's episode was so, SO boring. I'm really sorry if any of you actually watched it. If you haven't yet, then don't. The basics: Rudy wants to keep a dog she found and Vanessa wants to go to a party, and Cliff has to say no to both of them. Aren't you riveted? Let's just get this over with. 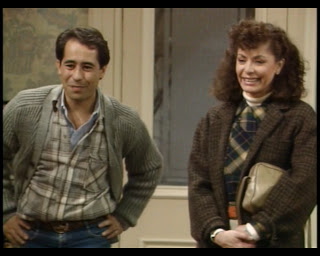 We'll kick it off with the day players. On the left is Mario Mendoza (as Tony) in his first television role. It would be ten years before he added another credit to his resume; in 1996, he landed an episode of Spin City. Since then, he's had several parts on multiple Law & Order incarnations, plus an appearance in Rounders. He's also played characters named "Mustachioed Man" and "Latin Gay" because he is willing to suffer for his craft. Next to him is Rosalinda Guerra as Marta. After starting her acting career with fifteen episodes of Ryan's Hope, she did this brief bit on The Cosby Show. And that's it. Sorry, Rosalinda.

Anyway, they're implausibly from Bedford in the episode (way north of Brooklyn, past White Plains), and the explanation that their dog jumped on a delivery truck and got off at the Huxtable residence seems unlikely. And even if that were true: how would they have seen the signs about the missing dog if they live an hour away? In terms of costuming, they are selling the "we own an apple orchard" concept by wearing as much earth tone and plaid as their muscles can support. Their clothes hold so little interest for me that I almost feel as though they've covered themselves in a sort of visual lubricant. My eyes cannot grab hold, they just slip right off. I'm tempted to make a cutting remark about her mom hair, but I'll leave it alone. 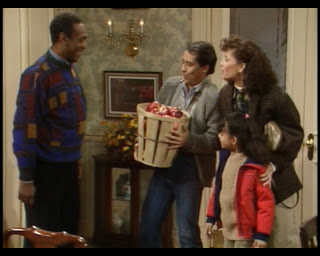 An apple a day keeps the doctor away. Here's our deposit for the month.

They also brought a plain little girl with them. Diane Lozada plays their daughter Nina. She's wearing some stuff. She's been in a couple things. Whatever, I'd maybe take a stab at that oatmeal-colored (and -textured) mess if she had grown up to be someone famous, but she didn't, so I won't. The best we can really do is move on and hope that someone else grabs our attention. 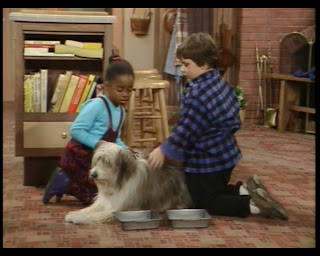 Could they have found a less ragged animal?

Peter shows up again in this episode as well, but he's really never going to be a fashion mentor, so I'm just including him in the shots with Rudy. Like, right here's he's wearing a blue plaid shirt and black pants. Would it really have been worth it to give him his own screenshot? Rudy's playing with color in her half of the frame, cutting that sky blue with a red and black plaid in a surprisingly successful manner. It's the purple boots that really win me over, though. They're so beautifully incongruous! I'm opting to find them delightful simply because they defy reason. You have to be brave or crazy to pull hijinks like that. Learn from her, my children, and make bold choices with your own wardrobes. 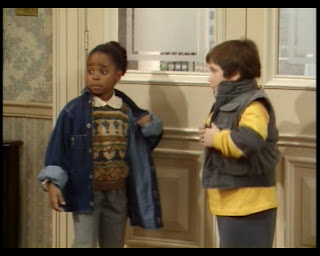 Her jacket is huge. His vest is tiny. They should maybe trade.

Peter's back in a yellow shirt with gray details to match his gray vest and gray pants. Nothing to dwell on. Rudy, on the other hand, is stirring the pot a little. 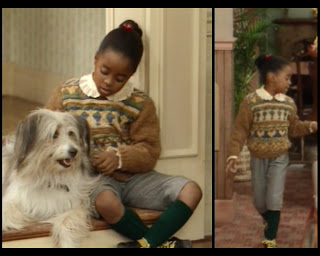 The Curious Case of Bethany Button.

She has previously worn these little britches, and this ruffled collar, and possibly this sweater too. While I may or may not have highlighted these specific pieces when it happened, it doesn't matter because they illustrate a larger point here: it's adorable to dress children like adults. By tossing her in clothes more suited to an old person, we've made her ten times cuter. Of course, in real life, only rich people would let their offspring walk around in such nice duds without there being some sort of occasion. Garments like this aren't cheap, and kids ruin stuff right quick, especially when they're out farting around with a dog.

The dog, by the way, is named Squeakers, which was almost enough to make me turn the show off and skip this episode entirely. 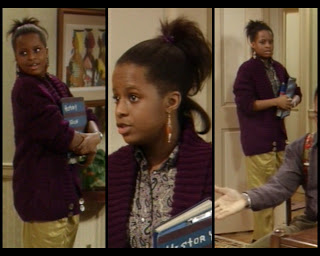 They call her Sticky Fingers Huxtable.

Vanessa is once again wearing the sweater that she got caught stealing from Denise that one time. I guess she was eventually successful in her efforts. It's a good sweater, at least. I think it matches her pants and shirt individually, but the three things don't come together to make a cohesive outfit. The paisley shirt combines with that deep aubergine to create something of a preppy look, while the golden pants fight that effect by being slouchy enough to be mistaken for pajamas. If she's going for schoolgirl chic, she should be rocking tighter slacks in a plainer color, like khaki. If she wants that loose vibe, then she needs something more casual on top, without a collar. This lacks direction. It's important to make a consistent statement.

Her second look is a bathrobe and actual pajamas, and thus won't be reviewed here. 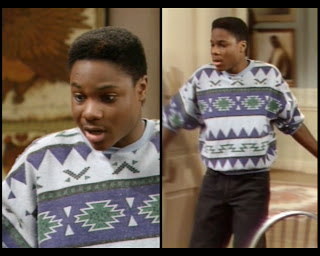 Honestly, Theo? You're doing this on the heels of Sondra's look from last week? Why don't you just come over and poke me in the eye? 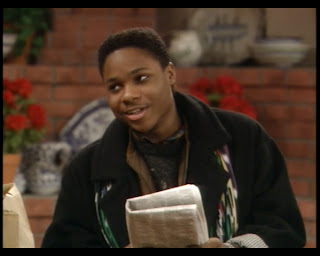 The calm before the storm.

Well there, that's better. That scarf is actually kind of nice. And I'm sure you're not hiding anything nefarious under that giant black coat... 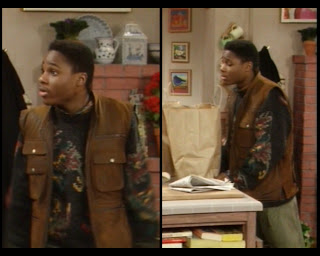 Outright hurtful and spiteful. How dare you tarnish the glorious dragon sweater from episode #2.7 with that unwholesome brown mutation?! This is an outrage for which I cannot stand. That vest must have been expunged from the bottom of a swamp or the inside of a shower drain or something. It's rotten. Pieces like that make me hate that I ever started this project. Careful with your outfits, guys. One bad apple can, in fact, spoil the whole bunch. 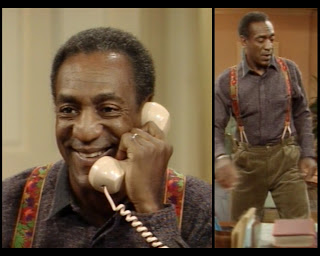 Cliff is working the repetitions pretty hard this week. First off, he's rocking almost exactly what he wore in episode #3.6, which is itself a rehash of earlier items. The suspenders, while not exactly the same, aren't entirely novel either. 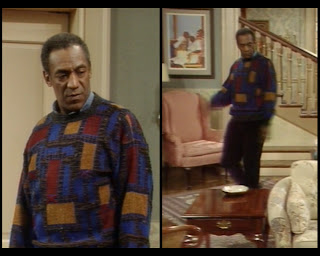 This garment is a reminder to say no to drugs.

Next up, it's his episode #3.4 sweater, paired with black pants. Help me out here, Huxtables. Would someone please wear something new or interesting?

Maybe this entry can be saved with a rousing game of HOW ARE THEY HIDING PHYLICIA'S PREGNANCY THIS WEEK? 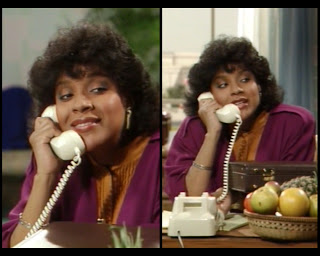 Look at all the seduction. I don't think you're ready for this jelly.

With pure, smoldering sex. Also, by placing her character in Washington, D.C. so that they don't have to feature her for more than three minutes. She's back in her episode #3.7 purple top, juxtaposed against some shimmery pumpkin ruffles that I could do without. Unrelated to clothing: why in the world would a hotel provide her with a whole pineapple? There's no way she has access to a giant knife or a cutting board. Impractical.

The usual spiel: tip your server. If you've liked this blog, consider donating a dollar. If you don't want to donate a dollar, consider sharing a link to this space on Facebook, Google+, Twitter, or your own website. I'd certainly appreciate it.


And that about does it. Until next week!
Posted by Unknown at 8:00 AM