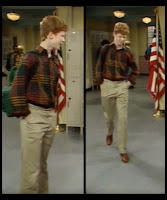 I contemplated skipping this guy, but then somehow decided that it would be better instead to include him in an almost insultingly brief manner. This is John Vopal as Andy, the kid who gets straight A's. His one-word role this week comprises the entirety of his film and television acting career. He's wearing khakis and a boring plaid shirt. I should have just ignored him outright, huh? 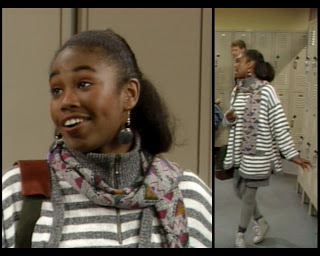 These are the clothes of a woman handling the stress of a crumbling relationship.

Tanya starts the episode in a rather problematic layered getup. Individually, I don't mind the two striped garments, but it's overkill to wear them together. If you have a giant zippered sweater, you don't need to wear an identically patterned cardigan over it, especially if both pieces are giant in comparison to your slim frame. She simultaneously obscures her shape and makes it difficult to differentiate between each individual sweater. Her bottom half is also all about matching, continuing with the established gray for both a skirt (that's a skirt, right?) and leggings. The silhouette is so very 80s, contrasting her twiggy legs with excessive volume. And the scarf is mad tacky. I'm not a fan. 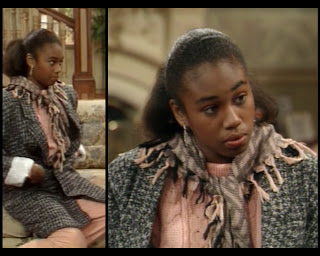 Girl, you'll be a woman soon.

She ups her game slightly for the big talk with Theo. Though she's still feeling the restricted palette vibe, she at least picks better colors, going for a creamy pink and richer gray. Her use of texture has similarly improved: we've got houndstooth in the coat, a more complex geometric in the scarf, and a cable knit in her sweater. She's more grown up here, which fits her two-scene arc moving from a young, flirty girl to a mature woman taking charge of her romantic life. I'm mesmerized by the kerchief styling of the knot by her neck. I could get into that as a revived trend. Should we maybe make that happen this winter? 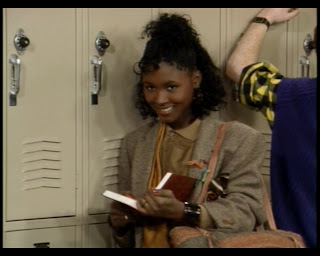 See this? This is why we can't have nice things. 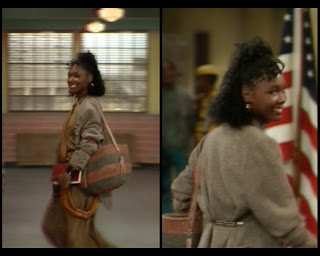 Giving him something he can feel.

Randi appears in only one scene. Though she has no lines, she clearly has no trouble getting her message across. The actress is Alsicia Pringle, who doesn't seem to have performed anywhere either before or after this show. From what I can see, she has at least some sense of personal style, which is primarily conveyed through accessories. The dress and jacket are pretty boring, really: beige, gray, preppy, plain. Still, they give a nice silhouette. The orange sash is a different thing altogether. It's tough to parse exactly what's happening there. It might just be a swath of fabric, or could be something more complex. Maybe it has a sleeve. Tough to say. Also, it looks to me like that bracket on the back of her jacket is the same one that Denise wore in episode #3.2. It's a brilliant accessory. If these aren't already a big thing, then they damn well should be. 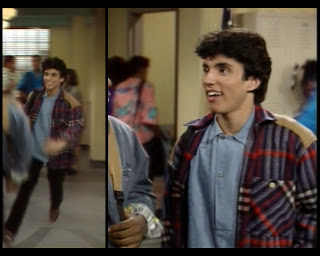 The other good student. Theo hangs out with the hotter nerd.

Gerald, Theo's smart friend, is played by Eddie Castrodad. He's most famous for his portrayal of David in the film version of Torch Song Trilogy. His character has a look going for him; there's a lumberjack feel to his boots and jacket. To soften that toughness (not that he was in any real danger of over-butching it), he rocks a periwinkle polo shirt. My main problem is with the extension of the buttoned section down to his sternum. This piece does not need help looking too big. I don't disagree that something should be done to make the top more dynamic, I just wouldn't have used that particular flourish. 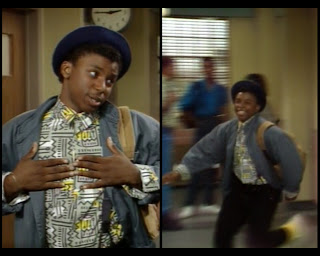 No running in the halls, young man.

Oh, Cockroach. You love bunched, brightly colored socks. I, on the other hand, do not. We're barely given a chance to process that flash of yellow at his ankle, but even that quick moment was enough to set off my radar. That coat: no matter how hard I stare at it, I can't conclusively tell whether it's the one Theo wore in episode #2.21 or not. While the color looks different, the shape (particularly the cut of the lapel near the neck) is the same. I'm inclined to think that it looks darker simply because of the lighting. Either way, it's not terrible. You know what was big in the '80s? Slim, black jeans. Know what else? Shirts buttoned all the way to the top. So if you were wondering why people do that today, it's because they watched The Cosby Show when they were growing up. I've got your number, Brooklyn hipsters. I'm rather partial to the Keith Haring-inspired print of this shirt and the suspenders, but I'd lose that hat. That hat makes him look like a damned idiot. 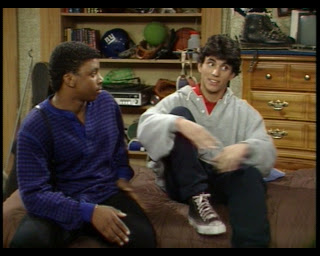 These boys know a ton about dating. No, wait. Not a ton. The other thing.

The boys return the next day to study with Theo. They're not doing much that I feel compelled to comment on. Gerald's sleeve has a dangerous amount of hang. He has no idea what size he is. Cockroach is rocking a single suspender, which makes me wonder if he honestly had both yesterday. I'm not of the opinion that they should be worn singly. Two or none, thanks. You can also rest assured that his purple shirt (which I love) is matched by bunchy purple socks just outside the frame (which, as you know, I loathe). 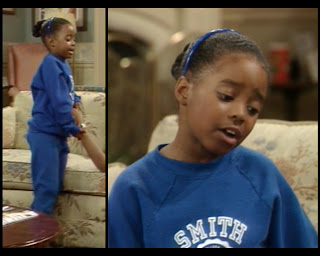 So close, yet... well, really not even close.

Rudy wears a sweatsuit this week. We don't talk about sweatsuits in this space. 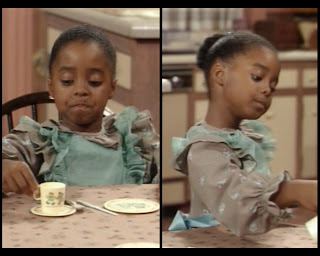 For the tea party, Rudy dons her episode #1.24 formal dress. She also unintentionally throws down some Regina George realness when she botches her British accent. I was momentarily convinced that her delivery of "Shall I pour?" was actually "Shut up, whore." 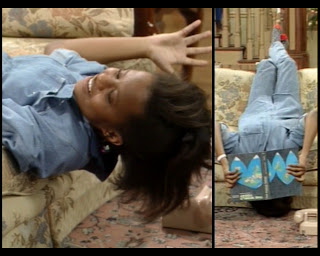 I don't think Vanessa is actually repeating last week's outfit, but she may as well be. 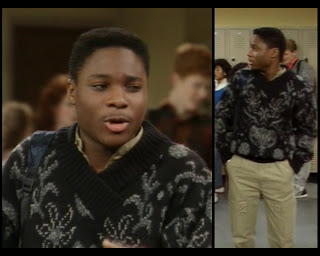 For his first outfit, Theo gives us a pretty adult look. His journey is sort of the opposite of Tanya's: he starts out sure and moves into a younger headspace as time progresses. I like the polish of this sweater, particularly its bold crossover v-neck and refined pattern. This opulent, I'm-an-upholstered-chair situation is good for him. Simple colors, clean lines, classic embellishments. 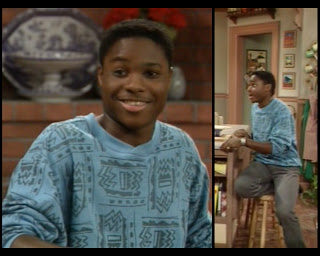 See how he's regressed? I don't think we've seen this specific shirt from him, but this color is reminiscent of the stuff he was wearing in early season 2. Ditto on the gray jeans. He looks alright, but he's clearly not on the same wavelength as Tanya. 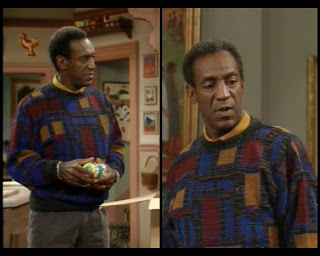 Cliff is getting serious about the Cosby sweaters this season. Mustard, maroon, and cobalt boxes on a charcoal foundation, all interspersed with a sort of jagged, static-like texturing. Commitment to excellence: the matching ochre shirt collar. It's an ensemble that only one man could pull off. 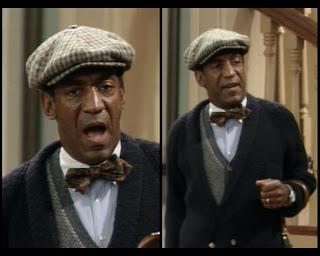 Next: the tea party. He goes into full gentleman mode with the real, tied-all-by-himself bowtie, the floppy newsboy cap, and two cardigans. Two. The grays, browns, and navies serve as additional helpful indicators. After all, this isn't an outfit: it's a costume. It's about presentation. He's selling the British gentleman persona appropriately.

And now: HOW ARE THEY HIDING PHYLICIA'S PREGNANCY THIS WEEK? 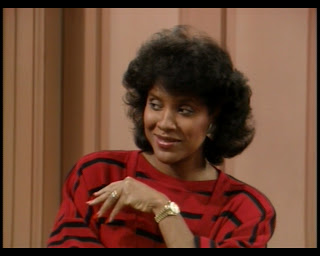 She knows I'm sassing and she can't even be bothered.

With close-ups! This is the number one trick employed by the production team: frame Phylicia from the chest up. 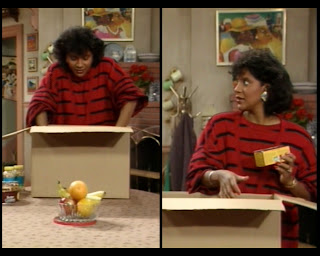 Also: with a great big box! Clair packs Denise (who is sadly absent this week) a care package that conveniently masks her midsection. We never see her pants, but on her top half, she's making Tanya's mistake of matching her cardigan to her sweater. I don't think that two garments in the same pattern is ever a good idea, even if you're a total goddess like this woman is.

That's the business, kids. I'll close with my usual begging. If you have enjoyed my recaps, please consider donating a dollar to help me keep this website going. I promise to use all cash received to maintain and, if possible, enhance the blog. I'm not going on wild vacations with your contributions.