Hey guys: Cliff is old! And kind of heavy! No, really, that's essentially the premise of this week's episode: if the doctor doesn't start cutting out fatty foods, then he's going to have a heart attack. Not the cheeriest topic for a weekly sitcom, but there you have it. Also, Denise is packing for college, which causes minor trouble when she chooses a vintage trunk instead of a new one. So quirky! Anyhow, down to business. 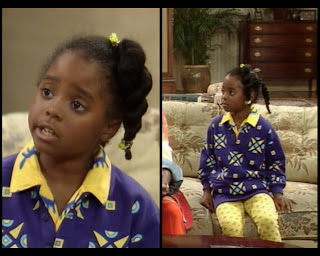 Welcome to the dubious honor of consistent attention, hon.

Rudy is six years old. Her outfit is appropriate only in that context. I'll give her credit for playing with opposite ends of the color wheel by pairing that buttery yellow with a purple so rich it's almost blue. And hey, why not make everything a print? Go nuts! You're a kid, take some chances. The shirt is maybe a hair short, but I guess at this age she's prioritizing mobility over modesty. I get it. 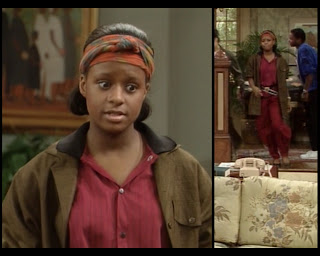 As much as Vanessa falters, she continues to impress me with her go-getter spirit. Living in a household of fashion titans, she could easily have given up. Instead, she tries and tries again, asserting her still-forming perspective with new choices each week. She has the potential for something good here with that pomegranate foundation. I don't think it's one piece, but rather a matched set. I'd kind of prefer for it to be a jumpsuit, but the bodacious cut of the harem pant more than makes up for that setback. She's rocking a subtle stripe, too, lending a dash of sophisticated patterning to the works. We've seen that belt many times from her and her sisters, and it's never great. She's on the right track, but I know she could have found something better. It's the sparkly edge that kills it; solid black would have been the way to go. While the head wrap doesn't totally match, it doesn't outright clash either. I'll allow it. Her real misstep, then, is this burlap smock of an overshirt that she's forcing us to look at. It's a huge problem. I'd love for her to be wearing a little shrug or something if she needs to keep warm. But this is the 80s, and we haven't really discovered small things yet. 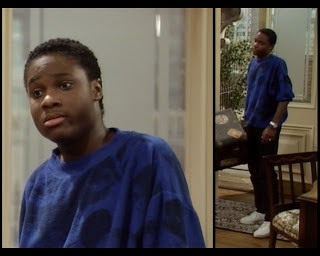 Theo is wearing almost the exact same thing as last week, except now the shirt is blue instead of yellow. This is actually a step backward, as the current sweatshirt is too dark to effectively communicate what the graphic is supposed to be. I am disappointed. 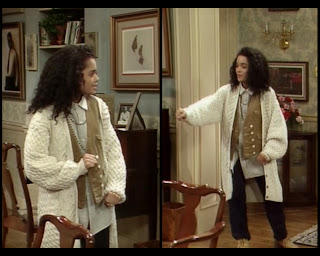 Running away from mediocrity at full speed.

Oh, Denise. You're such a weirdo and I love you for it. What's surprising about today is that she doesn't seem to have an overarching theme. I feel like she's usually pushing a pretty specific point of view, and here the references are all over the place. The work boots and heavy black jeans are decidedly masculine, but in a trucker or construction worker way. The vest has a dude vibe, too, but much more in the sense of a Victorian gentleman or marching band leader. Meanwhile, the shirt is unisex, and the huge sweater is decidedly feminine. Their union is more cohesive than you'd expect, and I guess that's the genius behind her madness. With all those soft, safe colors, she almost fools you into thinking she's dressed from an L. L. Bean catalog, but then you look closer and begin to see the complexity. 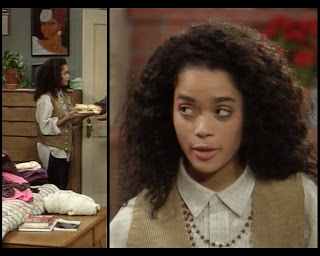 I'm not counting that plate of sandwiches as one of her accessories.

When she takes off the sweater, it's not quite as nice. With a layer on top, you can pretend that everything else fits better than it actually does. Beyond the obvious errors, like the bustle action she's got going on in the back, look at the smaller details, like the amount of space between her neck and the collar of her shirt. She's got the top button fastened, and there's still miles between her skin and the fabric. It's too big for you! Buy a smaller size! The necklace is cute, though, and I appreciate the corduroy of the vest. 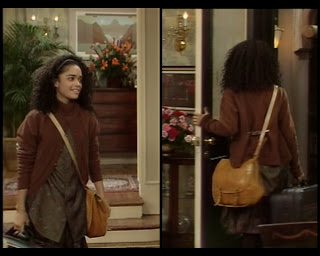 I'm also not counting that bag as one of her accessories. It's luggage.

She changes before she makes the trip to Hillman, and it's a definite improvement. The last outfit wasn't bad, but this one exudes such polish. The earthy, mossy palette is flattering and chic, the proportions are all daring, the pieces are each charming individually... everything just works. Since she's carrying suitcases, it's tough to really convey the perfection of her skirt length, but just trust me that it's ideal. And that sweater jacket with the binder at the back? Please. Everyone should have that. If you see one at the store, just buy it. Were I being particularly picky, I could perhaps encourage her to belt that shirt, but I'm just going to let her take the driver's seat on this one. 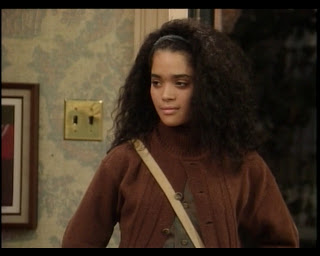 I don't have much more to add, I just really wanted to use this shot.

Aww. One final look back at the house. Also, notice how the turtleneck collar has no break or fasteners. You have to pull it over your head to get it on, and then leave the rest open anyway. It's what they wear in Whoville or Narnia or something. Absurd and magical. 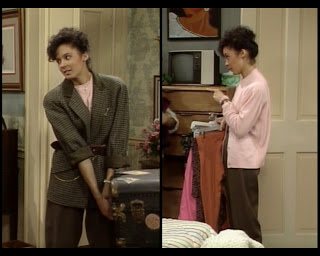 This is me trying to be nice.

Sondra's working pretty hard to win me over, and she might be succeeding. Her character is still written with a sort of grating, know-it-all quality, but her warmth and humor are showing through a little more, and she's nicely settled into this conservative fashion groove that works for her. That jacket and pants combo is so Town & Country that I just can't even. It looks great on her; the tailoring is a little iffy by today's preferences, but on the money for the show's era. Below that, she plays it safe with a delicate pink sweater set. I will strive to open my heart to Sondra. She and I could still build something. 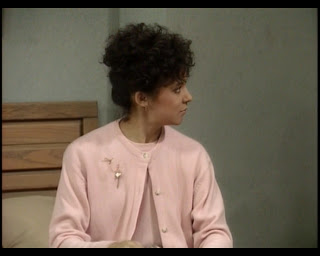 See? She looks nice here. She's dressed like a middle-aged Westchester County housewife, but that's a viable aim, you know? Use what you got. 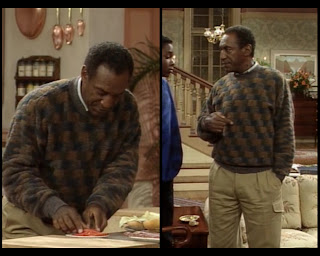 Blah-sby sweater, am I right?

Cliff's really into those khaki pants with the cargo pocket, huh? The sweater is unremarkable for him. It's totally decent, and maybe even slightly wacky in the context of what men typically wear, but after all the havoc he's caused, this is a bit of a sleeper. His tendency toward drab, moldy hues is problematic to me. I wish he'd stick to more vibrant options.

And now it's time to play: HOW ARE THEY HIDING PHYLICIA'S PREGNANCY THIS WEEK? 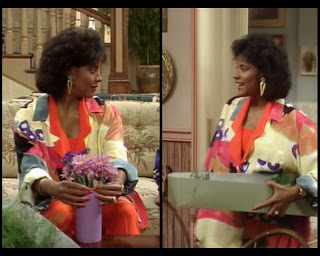 With flowers! Also, with draping and lots of bright colors and shapes. These garments are too loud to be honestly flattering, but they're not there to make her look good: they're there to confuse and trick your eyes. It's tough to figure out what's going on, you can't focus on any one place... it's a big, fabric trick. I would prefer fewer sherbet tones on her, which work better as an accent than as the entirety of a color scheme. 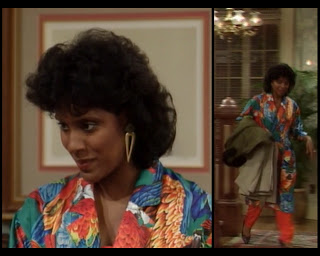 Bird of whatever the opposite of Paradise is.

We also hide her pregnancy with coats! And again with the loudest prints we can find. I'm not sure why she changed into this weird bathrobe of a top before accompanying Denise to the airport, but she sure did. It's uglier than her previous muumuu. I'm sorry this had to happen to you, Clair. It wouldn't make sense to feature you in adorable maternity clothes (and really, in this decade people hadn't yet figured out that maternity clothes could be adorable anyway), so here you are in these gross tents, acting your buns off but looking a mess. It pains us all.

I'll close with my usual request that you tweet @BillCosby with my URL. Don't wait for someone else to do it. They haven't. (I've searched repeatedly.) I'd hate for this blog falter in obscurity. The world needs to know.

Thanks for spreading the Hotness, loves. Hope you're all looking forward to next Monday.
Posted by Unknown at 8:00 AM