With 25 percent of the show behind us, it'a time to dive boldly into our third season with the Huxtables. We'll begin at the beginning, looking at the choices made for the show's latest opening, which features the family dancing to a new, Latin-influenced version of the theme song. 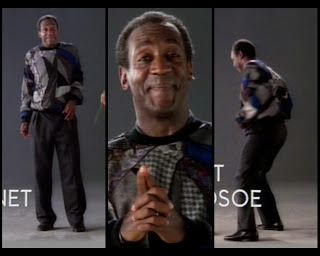 Starting us off strong.

First to appear is the good doctor himself. He makes it clear right from the start that he is going to hit you with some Cosby sweater in the year to come. Look at this piece of work. It's a giant mishmash of fabric shapes, and each of the smaller swatches is itself at least subtly patterned. Most of it is in the gray family, but he makes several dalliances into purple and even offers a handful of choice cobalt patches just to spice it up. The jaggedness of the overall design suggests a broken mirror almost: it is all disorder and confusion, but it's also a shining example of the fashion risk for which he was best known. By showcasing it at the top of each episode, he makes his ownership of this style intentional. I like the choice of dark slacks and dress shoes as a base, because they suggest that he intends this as a more formal outfit. Cosby sweaters are not just for daytime. 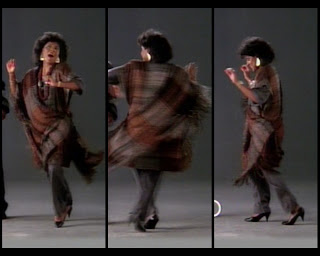 Imagine if they had just written in a sixth child.

Two things change this season. Having gotten married, the former Ms. Ayers-Allen is now officially credited as Phylicia Rashad. (It's actually Phylicia Rashād, but I'm omitting the pronunciation mark in this blog because of the hassle involved in cutting and pasting that character in every time. Sorry, I know it's lazy.) Anyhow, with her marriage came a pregnancy, so the entire season is spent trying to hide Clair's ever-expanding belly. For this sequence, she was still early enough that the carefully draped shawl masked her secret. Which is good, because this is an awesome look. It seems like it'd be too heavy to wear for actual dancing, but for an autumn stroll in the park? Divine. There's such a classic New England vibe to those charcoals and umbers; it's somewhere between Goody Putnam and Martha Stewart. But the fact that it's actually a shirt and trousers (or maybe another jumpsuit?) with a luxurious scarf draped around it turns it into this very upper class thing, which she rides out by bringing in the huge necklace and earrings. And the fringe! Darling, the fringe. Soak this up, because this is basically the only true fashion we get from her all year. Seriously, the rest of it isn't about look, it's about strategy. You'll see what I mean. 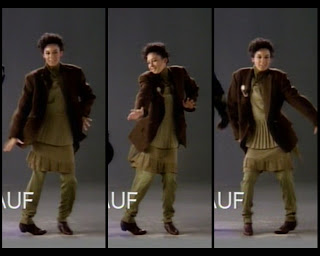 She's growing on me. Slowly.

Sondra will be in roughly half of the season's episodes. I have to say that, if I didn't carry a personal and completely baseless grudge against her, there's much about this outfit that I'm inclined to enjoy. You can't deny the blazer, nor the inclination to pair that chocolate with a sort of olive shade. And there's a very Denise sensibility about the turtleneck top ending in pleats draping over a ruffled skirt leading into bunchy pants that are tight without quite becoming leggings. Her use of pattern and shape is experimental and compelling. She's going for something here, and I have to applaud the vision. I do think that you run the risk of looking like Kermit when you throw down this much green. She might also want to reconsider the shoes: right shade, wrong style. Still, a lot about her presentation has been polished from previous appearances. This is a more adult way of looking at Sondra. As she enters her senior year at Princeton, she's finding herself, it seems. 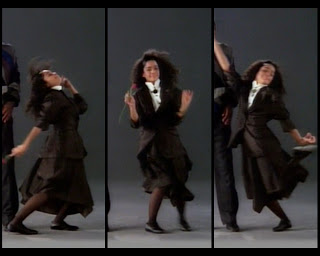 Speaking of Denise, here she is. I have to say, Lisa Bonet has impressed me more and more as a comedic performer. There's a certain carefree spirit she exudes that's actually rather difficult to pull off. You'd be amazed how tricky it is to look effortless when a camera is pointed at you. But she has this loose, playful manner that I just love. You can see it in the dance moves here. She's just goofing around. The outfit, on the other hand, is no joke. She's still dabbling in androgynous clothing; the shirt and blazer are clearly tailored for a woman, but have a masculine influence. She makes them her own by pushing the sleeves up and popping the collar. The latter is a move that I almost never allow, but it actually works here. To keep the look from slipping into silliness, however, she goes all black and all shiny. The billowy, complex skirt is extremely formal, yet kept young with its irregular, just-below-the-knee hemline. Her matching headband is an awesome way to give her hair a controlled wildness. And her shoes are flats because she's not caving to misogynistic tortures for the male gaze. That's right, Denise. You show them. But honestly, how flawless is this look? I live. 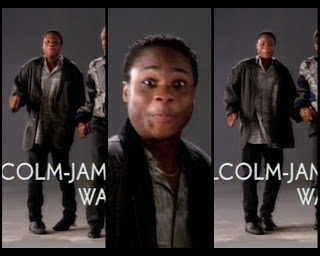 Theo busts out a Cosby impersonation, and he's not half bad at it. His look isn't anything special, though. Unlike his father, he neglects to break up the grays with a splash of color anywhere, leaving him to blend into the background. The silhouette is alright, I guess, though it's his usual approach: big on top, tight jeans on the bottom. And really these jeans aren't even that slim, but I guess we're moving toward the '90s where that cut falls out of vogue. I don't know, this doesn't really do much for me. 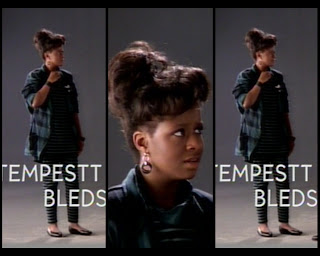 The left and right really are two different screenshots. She just doesn't move much.

Vanessa and Theo are serving similar concepts. I feel like if we could average out all of the outfits on this show, they'd end up being shaped almost exactly like a soft-serve ice cream cone. The ideal is to have a big rounded torso with legs that taper down to a point, apparently. She's also doing the Theo thing in that she's adhering to a pretty tight chromatic range. At least she's going for blues and teals instead of grays. The shades are nice on her. Looking closely, however, we can see that she's wearing either a shirt that matches her pants or a single, continuous striped onesie, and no matter which is correct, I have to question that selection. Despite that, I'm liking more about this than I dislike. I think I've spent too long staring at all the clothes from this show. I've been Stockholm Syndromed into acceptance. This is how it happens: if you're told it looks good for a long enough time, you just begin to believe it. 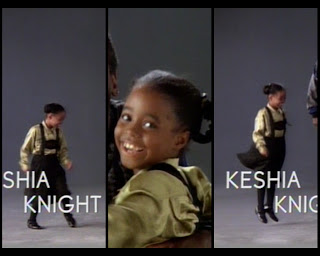 Jump for my love.

The braids pair with the lederhosen-y band across her chest in a manner that just screams costume. She could audition for a revival of The Sound of Music in that getup. I like the gold, though, and I love that she jumped. This sequence with her is the best: Bill Cosby kicks his leg over her head, and then she just hops into the air. It's the peak of all televised adorableness in 1986, I'm sure of it.

And there you have it, folks. Now, usually I'd post a donation link here, but I'm going to forgo that this week. Instead, I've got a different favor to ask. Do you use Twitter? If so, would you mind tweeting at Mr. Cosby with a link to this blog? Let @BillCosby know that you love this project, and that you think he might, too. I'm hoping he'll respond to what I've done so far. Ideally, his response will not be a cease and desist letter.

That's that, cats. Until next week. Thanks for reading. (And tweeting!)
Posted by Unknown at 8:00 AM