To kick off the third season, the family deals with a major crisis: there's a snake in the basement. That's really the only plot! Cliff and Theo unsuccessfully try to catch it, then an exterminator is similarly thwarted, and then in a triumph over her massive phobia, Clair (with her husband's help) manages to scoop it up in a pillowcase. Order is restored. All of the action takes place over a single day, so only one outfit per character, but the story features several guest stars to help pad out this entry's length. 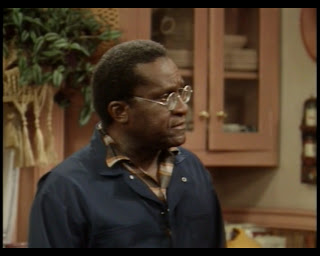 Snake in the basement: ain't nobody got time for that.

Leonard Jackson appears as the aforementioned exterminator. Just previously, he had played Pa Harris in The Color Purple. His resume extends to 1997's Conspiracy Theory, with recognizable movie and TV appearances throughout. Here, he's wearing coveralls and a work shirt, like you would if you were an exterminator. The round glasses give him a professorial air that's sort of at odds with his character, but some people wear glasses, you know? That's just how life is. 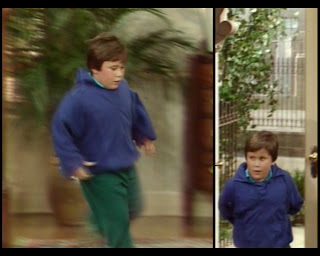 If you want to keep him plump, you probably shouldn't have him run so much.

Peter drops by only briefly, repeating his trademark running-out-the-door bit. It's not as cute as it once was. He's growing out of his roundness, though his costuming is trying to maximize his proportions in the right ways to compensate. 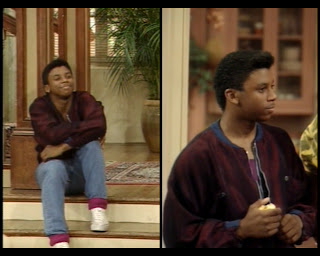 I love his crush on Denise. Mostly because it makes a ton of sense.

Cockroach swings by the house in a pretty rad jacket. The '50s-inspired cut paired with that totally '80s finish on the rich burgundy fabric is wonderful. The blue detailing is a bold choice, but it works. I probably couldn't pull off a coat like that, but I'd want to be friends with someone who could. Underneath, he's wisely chosen a simple purple tee that won't distract from the main event. The jeans he's picked are solid, but his signature puffy sock rolls are ruining everything, and he should really stop that. 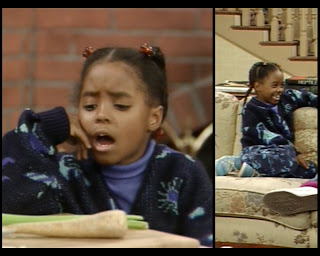 Range of emotion: she has it.

Rudy is getting to that age where I'm going to have to review all of her stuff, even though she's still totally a kid. It just seems wrong to give her only inconsistent attention. She's going for a matched set here, which is difficult when you're young and wearing something patterned, because you end up looking like you're still in your pajamas, even when you're wearing sneakers on the couch. Honestly why oh why does no one stop that madness?! As for palette, she could have done better. The periwinkle of her turtleneck, also seen in the print on her top and pants, doesn't go particularly well with the midnight tone, which itself is a little dark and severe. I like the brighter colors. She's youthful, and this outfit should thus be vibrant. Even when patterned, such a deep hue lacks the pop I want to see from her. 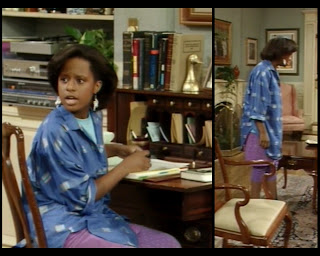 A hard-fought battle, and yet still a loss.

You know, Vanessa's a persistent worker, I'll give her that. She might not have style, but she's compensating with sheer force of will. For the top half, she's going for another away-from-the-body blouse that's sort of becoming her signature. I'm getting used to it in a way that's more about acceptance than enjoyment, but I'll take it. The pattern is good and the colors are even better. On the other hand, everything below the waist is a wreck in my eyes. Though dangerously close, the skirt doesn't actually match the leggings (which are blighted with an awful polka dot overlay, by the by). Beyond the color, it's the proportions that really bother me here: pants that stop at the knee with a too-wide skirt ending mid-thigh? No. She hasn't really hit her groove yet, but hopefully with continued observation she'll grow into her ambitions. 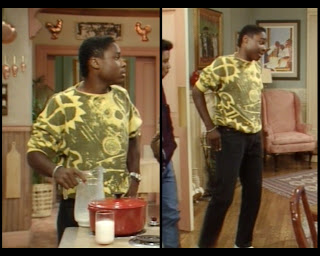 I think his top might give a pictorial retelling of the plot of Star Wars.

Wow, this is so clearly of its time. Theo's rocking black jeans, a sweatshirt in a primary color, and a loud futuristic graphic? There's no doubt that contemporary audiences found this appealing, but you couldn't wear this today unless you were deeply steeped in irony. (I know, I previously showered adoration on his tiger sweatshirt, but this is far less polished than that piece. He may was well be wearing pages from a bad indie comic.) 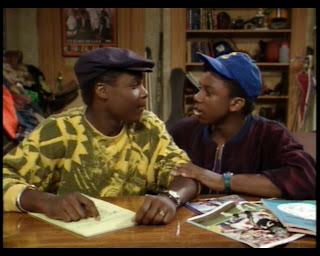 Does anyone still wear a hat? (Where are my theater gays?)

Later in the episode, he and Cockroach experiment with hats. As my eighth grade chemistry teacher taught me about science experiments: sometimes "no result" is your result. 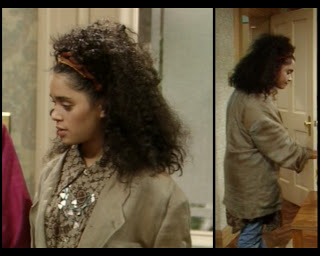 Those have to be extensions, right? She can't have grown all this over a summer.

Look at how much hair Denise has. It's an intense situation. Don't get me wrong, I love every last strand of it, I'm just captivated by how much of each image is taken up by her coif. It's amazing. Less amazing is that coat, which drives the oversized concept into bolder, worse places. I can't tell if it's iridescent or dirty, but either way it's not a great shade (and the idea of an opalescent beige is just absurd). Disregarding that, she's doing better with the shirt and necklace. They're not obvious bedfellows stylistically, but work well together anyway; something in the blouse's pattern reflects the shape of the jewelry in a way that makes them link almost organically. That fringe of fabric jutting out from under the blazer gives me pause because I lack a basic comprehension of its origin. Does it imply a willowy skirt? Is it part of the jacket? Might it actually connect directly to her top somehow? I'll add it to our mounting list of Huxtable fashion mysteries. One day, in a spin-off reality show, me and Raven-Symoné will go searching for answers. 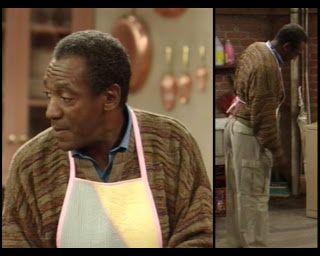 Why would you ever buy that particular apron?

With the exception of the closing moments, in which he wears pajamas, Cliff spends the entire episode in this goofy apron. He's also wearing his raggediest sweater. Its mildewy shades and droopy cut have a sense of resignation about them. If a garment could voice regret about its choices, this one certainly would. He brightens it up a little with that nice shot of blue in the collar, and he's back in the cargo pants game to show us that he can keep current, but there's really nothing that can be done to revive this woolen cornucopia of woe. I've never seen such a depressed, depressing article of clothing.

Starting this week and continuing until the end of season three, I'll end each entry with a new segment: HOW ARE THEY HIDING PHYLICIA'S PREGNANCY THIS WEEK? 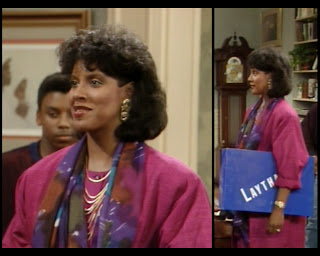 Pay no attention to the fetus behind the curtain.

With a giant box! Also, with many layers. The color itself is dynamite on her, but it's going to be tough for me to do any sort of meaningful critique of her choices because much of her costuming is based in practicality rather than fashion. Sure, they want her to look good, but it's also important that the viewing audience be tricked into overlooking her increasingly obvious biological state. To be fair, the show actually references her expectant nature slyly in the script, with Clair asking Cliff if she has gained weight. 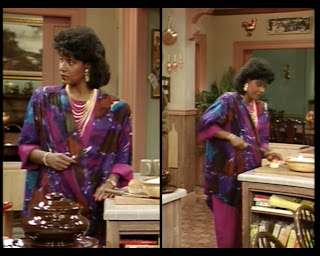 Giant shoulder pads and excessive draping are also good ways to hide a pregnancy. And wild patterns. Let's overlook all that and just appreciate the totally excessive necklace. That's a lot of look for chopping vegetables. On another note: if you're not watching the episodes as you read, I'd urge you to make an exception and see this one. Phylicia Rashad's performance in it is phenomenal. She's wringing every last drop out of each line, and it's a joy to watch from start to finish. Her acting is always good, but she's firing on all cylinders this week and basically carries what would otherwise be a completely unremarkable episode. Go find it on Hulu+ or YouTube or something. You won't be disappointed.

I'm going to end this week with another request for you to tweet @BillCosby with a link to my blog. Pretty please? Or just tweet about my blog to your own followers. Write about it anywhere online, really. I'm determined to become the premier source of Huxtable fashion knowledge on the internet, but I can't do that if nobody knows about this site. You're all popular and well connected, I'm sure. Help a dude out!

And now I'm going to go talk to my friends about Denise's hair. (Yes, I try unsuccessfully to engage people in conversations about sitcom fashion minutiae.) Until next week, lovelies.
Posted by Unknown at 8:00 AM