To end the season, the family gathers as Denise announces which college she will attend in the fall. She seems to have gotten into numerous schools, given that she begins the day having already "narrowed" the field to five possibilities. By the afternoon, it's between NYU and Hillman. I personally would have gone with NYU, since it actually exists, but then I wouldn't have positioned myself particularly well for my own spin-off sitcom. Way to think ahead, Denise. But that's not coming for another year; despite her enrollment at Hillman, Denise will only miss eight episodes next season. But we'll get there when we get there. Let's deal with today first. 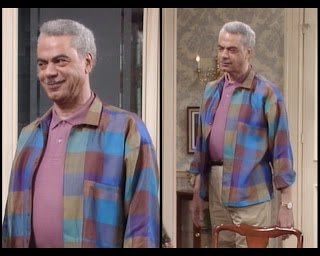 Russell and Anna come over to help Denise make a choice, though of course they're deeply biased. I'm constantly convinced that I've already reviewed clothes that I have not, in fact, reviewed. This project is turning my brain into a ball of fabric remnants. Anyhow, this until-now unseen pastel number (watch, one of you is going to find it in a previous episode) is fabulous in terms of its use of multiple blocks of color. It immediately draws the eye, not because it is an affront but because it is a joy to behold. On the pale mauve base set by that polo, it manages to look practically serene despite the complexity of the color scheme. I love this outfit for him. My one complaint is that the fit of the baggy shirt over the tight shirt makes him look rather paunchy around the middle. Grandpa generally flatters his form a little more than this. Something about the belt placement and draping just aren't working. And while we're talking belt, I'd have gone with a brown. Everything else is so soft, don't jolt my retina with that bolt of black. 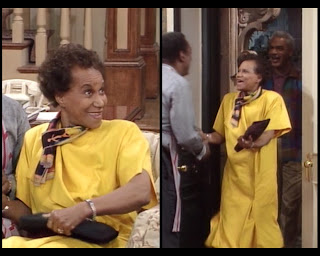 Her facial expressions in this episode get pretty manically deranged.

Anna's a lot of fun. She's pulled a few weird moves on us. I think Denise might get some of her eye for style from her grandmother. This dress has a strange, bunchy thing happening at the bottom that I'm not necessarily adoring, but not outright hating. Though not particularly elegant or flattering, the shape is compelling. It's chunky and rectangular in its cut, not to mention the short, oddly split sleeves or the puff of pleating at her shins... I don't know, she's going somewhere new and I feel inclined to follow her. I'm happiest with the high neckline accented by the off-center scarf. It softens the jump from that forceful yellow into her neutral skin tone. She's done a good job: if you're going to get dressed up, go ahead and get dressed up, right? 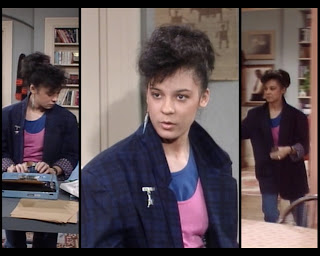 I'm counting Sondra in with the guest stars since she's never here. It will shock no one that I dislike this outfit. We'll get to that jacket, which is obviously the heart of the problem, but let's start with the lower layers. For the time, the basic jeans with a t-shirt under a tank top wouldn't have been a terrible choice. The colors are fine, though not particularly noteworthy for any reason, and as far as I can tell, everything fits. Her hair, on the other hand, is desperate for a brush or a bottle of conditioner or really anything to make it look less gnarly. I can't even bring myself to do more than acknowledge the single earring in passing. And now, the coat. The Huxtable women, it seems, are trophy keepers. Denise took her boyfriend's scarf, Clair frequently "borrows" Cliff's cardigan, and now Denise has claimed the blazer that Daryl wore in episode #2.4. Given how large he is in comparison to her, it's no wonder that this gives her a positively comical silhouette. Look at her as she bounds through the door like the god damned Kool-Aid Man. The rolled-up sleeves actually work, but come on, this garment was created for someone whose body bears no resemblance to hers. It was especially wrong of her to steal this when we account for how much better he wore it. 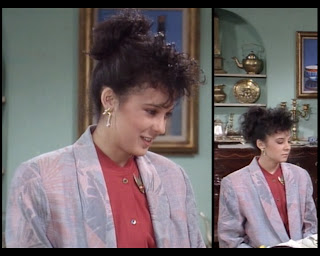 Eager to continue her parade of confusing choices, Sondra changes into her formal oversized coat for dinner. This one is every bit as broad as the last, but would be ugly even if it fit her properly. I appreciate the shawl collar and the delicacy of the shades, but the use of such wimpy pinks and lavenders in a palm frond pattern just reeks of cheap resort decor. This is the kind of fabric that you see on spring break in your hotel room right before you vomit a pitcher of margaritas onto it. The shirt also matches terribly. It's funny, because pink and red are totally current; these just happen to be the wrong shades of pink and red. They need to me more saturated. The Honor Pre-Fall 2012 collection is a good example: 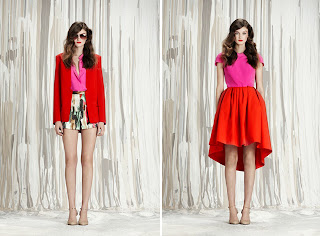 See? Also, that's what a well-tailored blazer looks like, FYI. 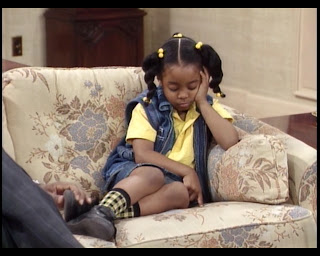 Don't be sad, Rudy. The all-denim look had a brief comeback at the turn of the century. Seriously, Justin Timberlake made it OK to leave the house in a suit made of jeans for, like, a whole year. Also, yellow looks great on you. 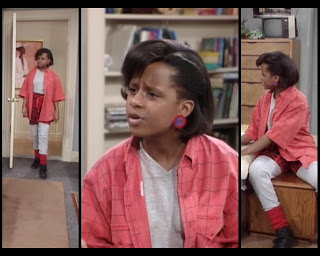 She's a superhero imbued with epic amounts of laziness.

I want to cut Vanessa some slack because this is probably just a lounging-around-the-house look, but she's put so much effort into the matching-ish layers that I have to spend at least some time commenting on them. I mean, it goes without saying that this is awful. She's, oddly, closer to the current red and pink trend than her older sister, but still miles away from anything that could be considered fashionable. I mean, she's wearing clothes over a sweatsuit. No. No absolutely not never no. And why have those shorts been hiked up so high? They are literally touching the bottom of her rib cage. There's a manic, unmedicated part of me that almost thinks you could take just the pink shirt and the high-waisted shorts and make a sort of funky, so-bad-it's-good-but-still-a-little-bad outfit, but mostly I think this is an unsalvageable disaster. And I'm tired of those earrings. Her hair at least looks nice. 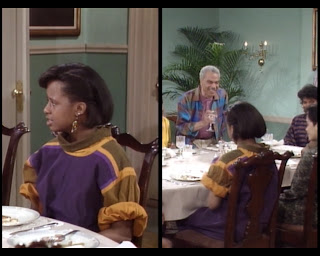 Like Sondra, she chooses to change before dinner. Unlike Sondra, she comes to the table wearing a rejected ewok costume prototype. No, for real, what am I looking at? The marigold, eggplant, and olive are pukey, the geometric patterning is retro without the fun, and the rolled collar and cuffs take a supposedly formal garment back into the realm of the casual. Any attempt at elegance is totally undercut by the junky palette and confusing fit. This is deplorable. 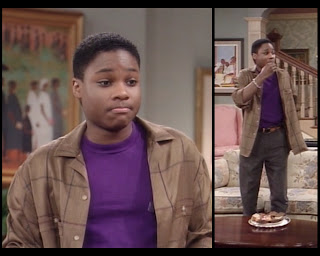 There's definitely the start of a pectoral situation here.

Theo sticks with a single look this time. Though the top half is a repeat of his episode #2.12 "dressy" outfit, I much prefer it this time around. Rather than trying to make it cleaner than it is, he leaves it unbuttoned and aims for easygoing. The gray pants are fine, but the tan belt sticks out in a terrible way. 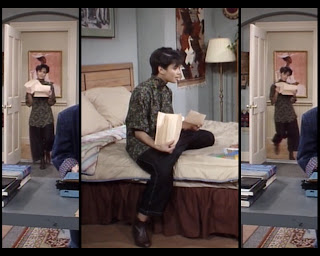 Denise is rocking a rad silhouette this week, pairing a fitted (for her, at least) top with some great big gaucho pants and high boots. This is actually a retro look for her; gauchos had fallen out of fashion by the end of the '70s, so she's not doing something brand new, but rather trying to push a comeback. Somehow that knowledge makes this a little more compelling to me. Wearing clothes that were popular a decade ago often makes you look really tragic to others. Imagine walking around today in the aforementioned all-denim Justin Timberlake ensemble. It'd come across like a joke. In that context, this is a completely renegade move. 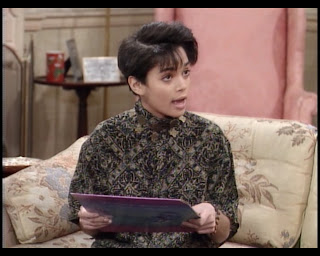 The episode starts with Clair listening to a Jimmy Scott album because she's awesome.

Up close, that blouse is a phenomenon. The pattern? Opulence. The colors? Regal. The neckline? Superb. The necklace worn over the blouse? Flawless. She should have applied to FIT. 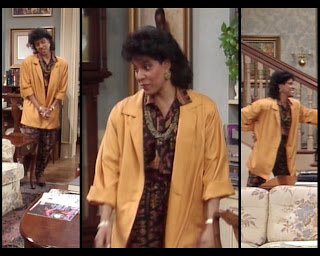 Yes, she's awesome even if she wears this.

Clair sort of lets me down with this first display. I'm not sure what's going on beneath that pumpkin-colored monster, but it seems to be a jumpsuit patterned in autumnal shades and belted well above her pelvis. I love the hues, but she's presenting a little like a low-budget supervillain. I'm tempted to say that it would be better without that shirty jackety whatever fabric humongoid thing, but we don't know for sure what lurks beneath, so I'll keep my guesses to myself. 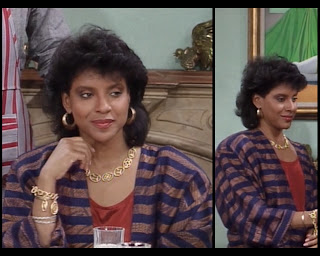 This I can get behind. The red shiny top I actually don't care about at all, but I guess she needed a neutral-ish base, and everything else here just sings. The subtly patterned royal blue and gold in horizontal stripes, under all that round jewelry? Heavens yes. She shows her daughters how draping is done this time around, using the bulk of her blouse to give off a high-fashion, queenly air rather than just slouching into the billows of cloth. I wish we could see what sort of pants she's wearing. In my head, they are so slimly, perfectly tailored that your heart breaks. I know that in real life they're probably a pleated mess in a clashing color, but we thankfully never have to see her brilliant top half tarnished in such a manner. 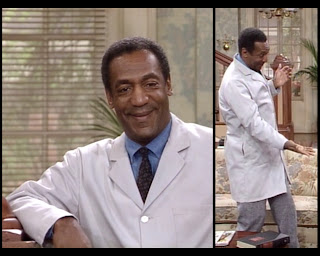 The doctor is in.

It's a shame to end on Cliff, really, as he has so little to offer this episode. Lab coat over boring business casual? Who wants to talk about that? 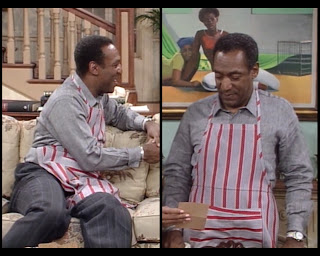 The paintings in the Huxtable household are wild.

After losing a bet to Clair, Cliff has to serve dinner to the whole family. Unfortunately, this means that he has to spend the entire second half of the episode behind this apron. Not that we're missing much: it's all gray. The pin-striped pants are nice, I guess. I'm not a huge fan of the shirt, but I think it's well chosen. After all, when Denise had the opportunity to dress him in episode #1.9, this is the top she chose. Thus, there's a slight poignancy to his decision to wear her favorite piece from his closet. I'm not sure if the costume department realized they were doing that, but I certainly hope so.

And there we have it: two whole seasons of Huxtable fashion. Can you believe it? I can't. I hope you've enjoyed reading along with me as much as I've enjoyed writing this for you. If this blog has kept you amused enough that you'd like to provide a little financial support, then I would of course be grateful. A dollar here and there helps me pay for the basics to keep this site running, and to prepare for future improvements. If you'd like to send me a buck through the magic of the internet, then the yellow button below will help you out. If you want to provide non-monetary assistance, then the best thing you can do for me is to direct traffic my way. Anything you can do to get me an audience would be hugely appreciated.

Of course, if you'd prefer not to send money or share my URL with others, I'll still keep writing. I said I would finish all eight seasons, and that's just what I intend to do.

See you next week, when we take our first peek at season three!
Posted by Unknown at 8:00 AM