Continuity between the DVD's numbering and the internet's ordering of the episodes has not yet been restored. The discs label this as the final episode of the season, which I don't think would have been a stellar choice as it's a pretty dull one. IMDb and Wikipedia both say that the season ended with the episode in which Denise chooses a college, which makes a lot more sense to me. But back to the current story. Remember in episode #1.20 when Cliff raced Tailwind Turner? Well, the Colonel is back, but this time, he wants Cliff to race with him, not against him: they're participating in a charity relay together. Asleep yet? If not, catch this humdinger of a side plot: Rudy does chores to earn money for a new toy.

I wish I could say that the clothes spice things up, but 90% of the items on display are either sweats or repeats. The ones that are new aren't great. Sorry, guys. 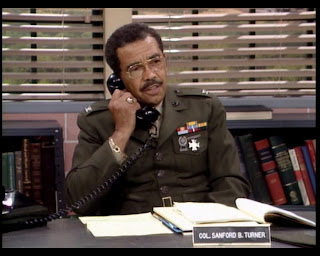 The glasses: worth mentioning? I opted for "no."

Since he's a prominent part of the story, I'll insert a picture of Joshua Culbreath as Sanford "Tailwind" Turner. His two appearances on The Cosby Show were his only acting gigs; his other claim to fame is his bronze medal for the 400m hurdles at the 1956 Olympics. For this blog's purposes, it seems superfluous to critique his attire. He's not doing military like Denise does military, he's just wearing a regulation uniform. There's value in appraising standard-issue regalia from a stylistic perspective, I suppose, but it wouldn't say a lot about the influence of '80s fashion on today's dress and culture. (Do I ever say a lot about that influence, however? Debatable.)
Three-time Olympic gold medalist Valerie Briscoe-Hooks makes a cameo as the substitute runner against whom Cliff competes after the scheduled athlete hurts his leg, but she's wearing running clothes, so I'm not including her in the review. Most everyone spends a lot of time in various forms of workout gear, so let's just get some of that out of the way right now. 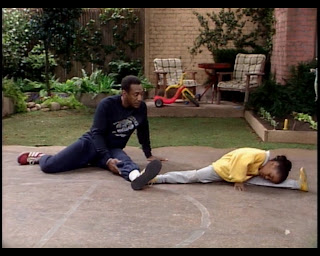 Rudy can do the splits! True fact. 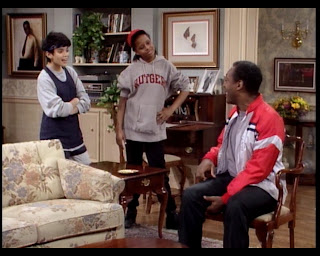 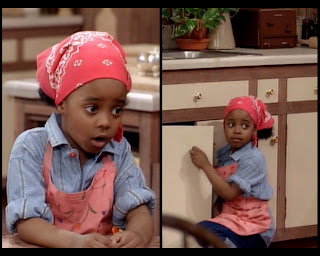 She works hard for the (incredibly small amounts of) money.

Rudy also has a tiny little cleaning outfit that I can't even believe. It's clearly constructed for comedic effect, but it's kind of wonderful in that regard. The handkerchief, apron, and rolled-up sleeves let you know that she is here to get the job done. And she does earn all the dough she needs to pay for the new doll herself, which I like to think implies that having the right outfit will support your success in absolutely any endeavor. I may be learning the wrong lessons from this show. And from life in general. 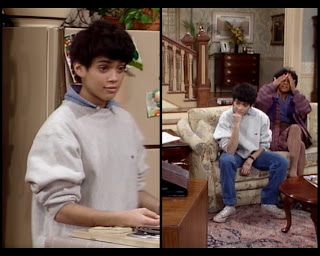 She's an orange ascot away from playing Fred in Scooby-Doo.

Denise's outfit this week is so brazenly preppy that I feel like it has to be a joke. Am I the only one who finds in jarring to see her sporting such conventional duds? Plain, pedestrian, perplexing. It makes sense that she would own some basics, but not that she would wear them all simultaneously. Color me confused. 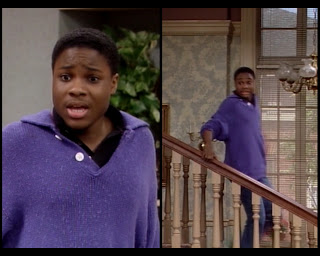 Theo offers us two new pieces this week. At least someone's picking up the slack. His first attempt is this purple sweater that I maybe like, but probably not. On the one hand, it has a slouchy, casual vibe that suits him well, and the lazy cut somehow manages to make him look like he has great pecs. On the other hand, the collar seems excessive in its efforts to touch the ends of his shoulders, and the giant white buttons give it a childish impact. He's alright in terms of color, though I've seen better shades for him. I dunno. It's interesting, but not a home run. 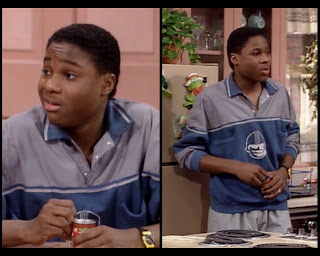 This top has a lot of the same pros and cons as the first one. Again, there's a certain elegance to the fit, in that it's loose bit not saggy or dumpy. The colors are pleasing, if not daring. There's some preppy flair to the blocking and stripes. But he again falls prey to that toddler sensibility with the picture of the football (rugby?) player on his chest. And whereas the last shirt managed to give him a little extra physique, this one has pockets basically designed to evoke droopy fabric boobs. I'm calling an equal number of wins and losses here.

Vanessa never appears out of sweats, so we'll skip her and move straight to Cliff. 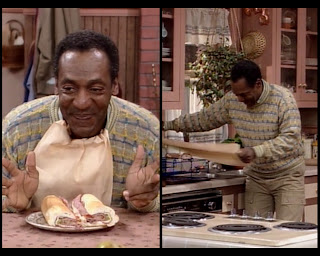 I don't think we've seen Cliff in a cargo pant since episode #1.17, so these khakis are new territory for him. This is also a new sweater, and it's pretty spectacular. The blue, yellow, and white meld well, and the complicated striped pattern makes me smile. Not like he's smiling; like, a regular human smile. Since the colors are a little paler, the effect stops short of overwhelming. I might not have paired these two items myself, but they're OK together. I'd have preferred one half of the equation to be a little more saturated in its shade to balance the outfit, though. 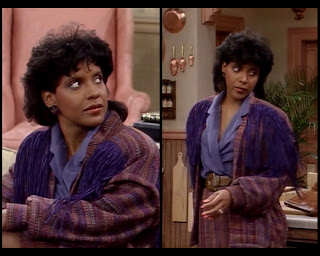 Clair begins the episode in her #2.21 fringed suit, of which I am still not a huge fan. 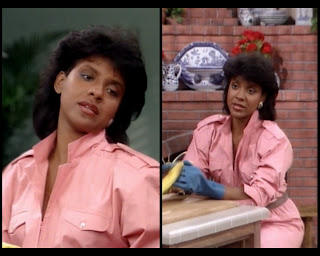 She then changes into her #2.22 pink jumpsuit, with which I am still completely in love. 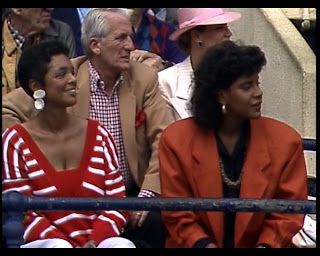 Dr. H and the women.

She closes out the show by attending Cliff's relay race in an enormous blazer. It looks like sort of a blood orange hue, but I think the overall picture is kind of dark, meaning that the garment might be a little brighter. Regardless, it's comically large on her and needs to be given away. There's a giantess out there who would really appreciate the chance to add this to her wardrobe.

Oh, and hey, who's that sitting next to her? Just some lady? No, Dr. Huxtable is also being cheered on by his real-life spouse Camille. I think it's kind of adorbs that she got a cameo. She looks cute, too. I'm happier with her outfit than with Clair's, truthfully.

Anyhow, that does it for this week. It seems almost unfair to beg for money after such a short entry, but I'll do it anyway. As always, I'm not interested in becoming a millionaire: if you want to donate a dollar, or even fifty cents, I will put it toward covering the costs of obtaining the domain name, the DVDs, and any other Cosby-related things that might help the site be more fabulous. If you liked the blog, but not enough to give me money, then consider sharing it somewhere. The best thing you can do for me is get me exposure: post a link to your Facebook page, or talk about it with your friends, or give me a shout-out on the radio show you do for your college, or mention the URL in the company newsletter you write. It would be super helpful. Thanks!