Once more, the DVD  disagrees with the internet about which episode comes next. I have some questions about how this box set was compiled. As is always the case with such discrepancies, I have placed my trust in the Internet Movie Database. This week, Cliff welcomes his father for another in their regular series of pinochle games. Though Russell and his friend Homer are used to winning, their victory is no longer inevitable once Cliff's college literature professor joins the game. 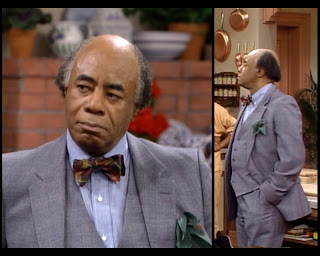 Roscoe Lee Browne earned an Emmy nomination for his appearance as Dr. Barnabus Foster. He would reprise the character a handful of times for A Different World, and otherwise made a good living playing mostly distinguished gentlemen in both television and film until his death in 2007. His distinctive voice made him a good candidate for work in animation, as well, leading to roles such as Kingpin in the Spider-Man cartoons. Here, he is dressed in a crisp, classic three-piece suit to match his austere presence. The attire says a lot about him as a person; while it is specified that he has a conference to attend the following day, his only immediate commitment is a social call with the Huxtable family. There's thus no need for him to be dressed so formally, so his choice to do so communicates an uncommon adherence to old-school social graces. For the most part, this is a well-made but unimaginative presentation: that shade of gray is about as safe as one can get, as is the periwinkle of his poplin shirt. He adds just a touch of whimsy with the brighter plaid bow tie and the emerald handkerchief overflowing from his breast pocket. These pieces liven the look and hint at the rakish humor hiding just below his slightly dour surface. 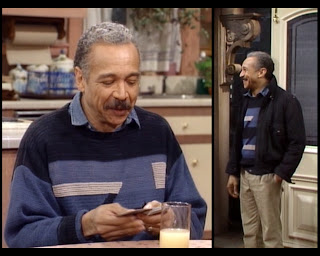 This "regular" game of theirs happens with astonishing infrequency.

Homer is portrayed by Bill Gunn, whose acting career ended with this character. He died a few years after his second appearance on this program, at only 59 years old. In addition to his on-screen career, he had some success as a writer, for instance penning the screenplay for The Landlord. In terms of fashion, he's clearly working in the realm of the Cosby sweater, though his color and pattern choices are not as overtly daring. There's something calming about the geometric blues and subtle gray accents. He's just a normal guy wearing a normal, off-the-rack outfit. 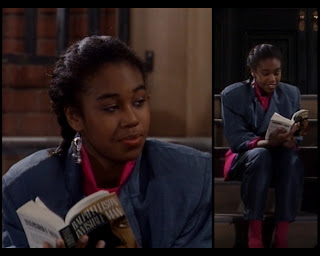 Someone needs to install a streetlight outside this house.

The secondary plot of this episode involves Theo's uncertainty about whether to give his girlfriend Tanya a cheap imitation diamond ring that he bought from an ad he saw during a wrestling match. The woman in question is played by Tanya Wright, who has done her fair share of TV work, including a season of 24 as Patty Brooks and a recurring spot as Deputy Kenya Jones on True Blood. It's a shame we only see her briefly and in darkness, because she might be working with something here. There's too much denim happening, and the shoulder pads are excessive even by '80s standards, but that pink looks pretty outstanding, especially when you take in the possibilities implied by her boots. That could very well be some gut-wrenching footwear. Also, there's a chance that she's repeating Aunt Sarah's episode #2.9 shirt. We'll be left to wonder, though, because details are unavailable. Those pants with the weird cuffs might be high-fashion genius, or they could be a baggy mess. I see potential here, but more questions than answers.

Side note: this scene starts with the two young lovers discussing Ellison's Invisible Man. While they never get beyond saying they both like the book, it's one of the few examples of racial politics getting referenced, even obliquely, in the show. 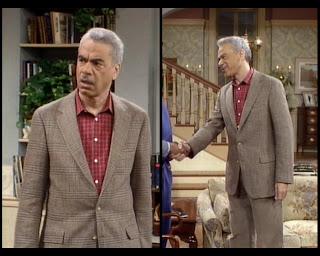 It's time to go shopping, dude.

I was shocked to learn that Russell is not wearing the same jacket as the dude who hit on Clair in episode #2.9. The placement of the wider bands in the pattern differs between the two coats. While it isn't identical, the resemblance is nonetheless close enough that I have nothing new to add in terms of commentary. We've also seen this shirt before, most recently in #2.17. The pants are too close in tone to the blazer, but I like that he's distancing himself from the plain khaki base by incorporating two distinct plaids. 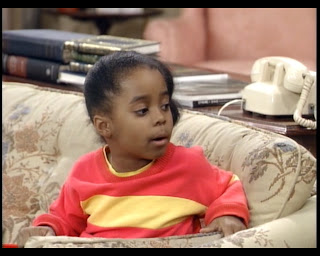 I probably could have worked harder to get a flattering shot of her.

Rudy has worn this before. I'm including her only because it always feels a little wrong not to. 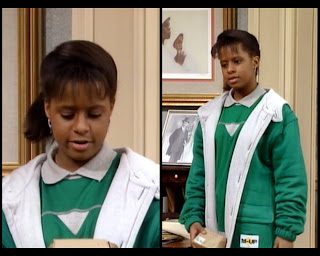 This is what a Power Ranger looks like without the power.

We don't generally see a lot of straight green in Vanessa's attire, but she makes up for it with this getup. I find it unlikely that the sweatshirt and coat were sold as a set, so she much have bought them separately with the intent of wearing them this way. I'm generally opposed to this kind of uniformity, and I'm a little surprised she went there. Vanessa is all about weird patterns and color combinations, so seeing this little variance from her seems almost retrograde. Also, she never takes that coat off, which ensures completeness in her outfit but makes zero sense in the context of a regular human spending time in her own home. There's not a lot of good happening in this instance. 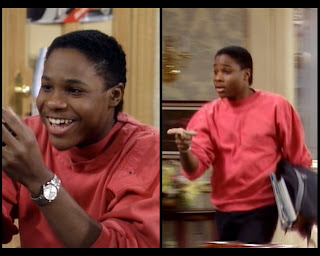 He likes it, and will put a ring on it.

In terms of hue, Theo's shirt is pretty much ideal; the orange-y pink is dazzling without seeming excessive and adds a noticeable glow to his skin. As we got closer, though, we can see that it's trying to hide its true sweatshirt identity with busy details. Your double collar, oddly placed seams, and superfluous grommets don't fool me. 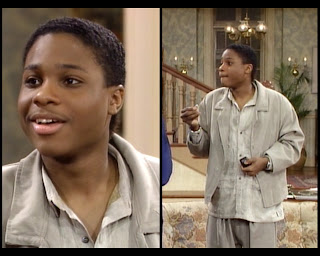 He's apparently on his way to a beach funeral.

For his date, Theo changes into this, which completely baffles me. It's all beige. ALL BEIGE. I can't stress forcefully enough how wrong this is. Please never, ever, ever in your life wear your three baggiest, beigest garments together. In fact, even owning three baggy, beige garments might be a bad idea. Can you imagine trying to impress someone like this? You do not look your best, dude. You look like you're wearing one of those protective covers people throw over their motorcycles to guard them from the elements. Does this tear away to reveal a better outfit underneath? Are you trying to liken your body to a sexy motorcycle? Because if so, the reference is lost. Mostly, you look like someone who has no idea how to dress himself. 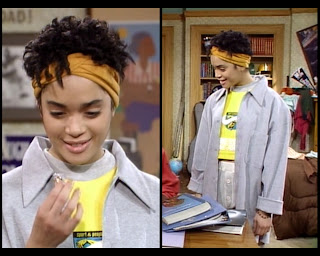 How the mighty have fallen.

When you take a lot of risks, you're bound to make some mistakes. Such is the case with Denise's look today, which is just a head-to-toe affront. The shirt fits like an overcoat, the yellow underneath it is garish and does nothing for her skin tone, and the pants bulge like a diaper. Details like the overlarge cuffs at her wrists and the buttons down her fly only cause further distress to the eye. Just look at the shot on the left. The collar is so hyooooj that this ends up seeming like a shot from onetinyhand.com or something. There's seriously nothing good happening here. Even her hair is a little less put together than it was last week when she debuted this style. I guess maybe the orange head wrap works, though it would certainly be considered the most boring part of one of her good outfits. I'm disappointed. 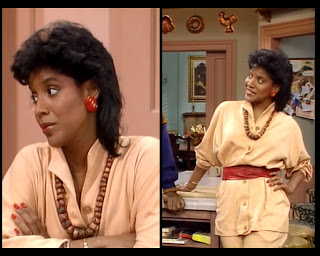 Check yourself, Clair. Mullets can happen to the best of us.

In another close-but-no-cigar fake-out, this is a different all-yellow, red-belted outfit than the one featured in episode #2.7. The shade is slightly different, the lapels have been adandoned in favor of more buttons, and the belt is thicker and higher than before. I don't think any of these adjustments count as improvements, nor do I necessarily see the logic in having duplicates of this rather simple ensemble. It's sort of "whatever" for me. I like the big wooden beaded necklace. 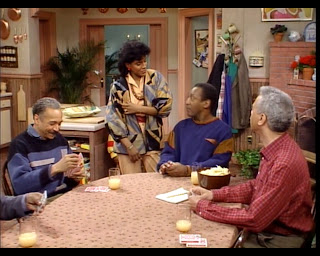 She swings by in this coat later, which gets points for sheer audacity if not for actual style. 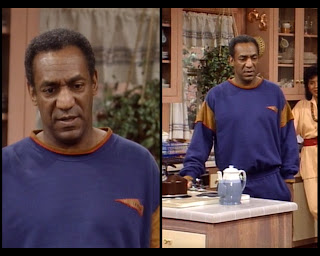 For him, this entry is already over.

Last and actually least, we have Cliff in another sweatsuit. I'm concerned by his willingness to remain in sub-clothes body coverings when he knows he'll be hosting company. Have a little self-respect, doctor. This is the kind of example that convinces your son to go on dates wearing person-shaped slip covers. Notice that the name Lemire has again been added to an emblem on his chest. She's like Zorro.

That wasn't much of an episode. Not my fault, I'm just reporting what I see. I can't add opulent garb where it didn't previously exist. If you liked the entry this week or other weeks, I'd be thrilled if you could donate a dollar to help me cover my costs. If you can't donate a dollar, I'd be equally thrilled if you would help me spread the word about this blog in some manner. Publicity is better than cash, really: if you can refer people to this site, I will be especially grateful. And of course, I still accept money.