This episode is a downer for a number of reasons. Plot-wise, it's a very special episode in which Cliff invites his friend Dan to the house, only to learn that Dan's daughter Cindy is struggling with alcoholism and cocaine addiction. Many tears are shed. Theo and Cockroach attempt to lighten the mood with a rap they wrote for a school project, but it hardly helps. Another downer: between the sweatsuits and the repeats, there are few outfits to review this week. I've got a blog-related story to fill some space, but I warn you now: it does not have the ending for which I hoped. Sadness abounds. Chin up, dear reader. 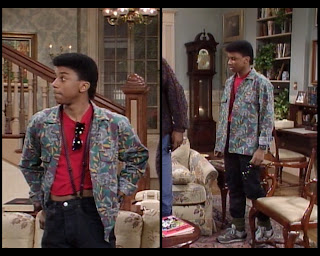 The rhythm seems to have already gotten him.

We're going to start with Cockroach, both because he's a guest and because his effort is evident. Once again, I'm led to wonder if his clothing might be intentionally shabbier as a class indicator. That patterned shirt feels cheap to me, though I admit that I might get that impression simply because it's the kind of item one would find in a thrift shop today, even though it was much more en vogue at the time of the show. I don't know, it's cut like a military surplus coat, and the colors look dirty collectively even though they're individually quite bright. Underneath, the outfit would have been basic without his intervention. Dark jeans and a red shirt could get boring quickly, but he's turned the volume way up. Cutting off the shirt and hiking the jeans high while still showing a hint of midriff is a really specifically mid-'80s thing. Straight men really did this. His use of suspenders is amusing to me: hitching them to a single off-center point is sort of quirky and great. He has once again rolled his jeans into his puffy socks, though, which I could do without. This is one of those outfits that makes rewatching the show such a joy: it would never fly in a contemporary setting, but it's outrageous enough that it must have looked incredible originally. 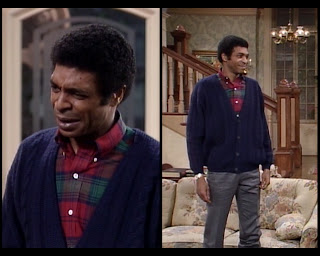 He's not crying in that close-up, though he is for the entire rest of the episode.

Samuel E. Wright guest stars as Dr. Dan Morgan. Though you probably don't recognize his face, you're certainly familiar with his voice: he went on to perform the role of Sebastian in The Little Mermaid and its various ensuing incarnations. He later earned a Tony nomination for his work as Mufasa in the Broadway production of The Lion King. His commitment to the dour material helps this episode from sinking too far into melodrama. As for his clothing, he's not serving anything extraordinary: we've seen plaids and cardigans plenty of times. I will say that the color choices are tough to question, even if they're not necessarily risky. The fit of his trousers is worth highlighting. He's a tall, thin man, and tailoring for his shape can be difficult. As a slender dude myself, I can tell you that looking this sharp in off-the-rack slacks is tough. These were either altered to fit him or selected quite carefully. Either way: well done. 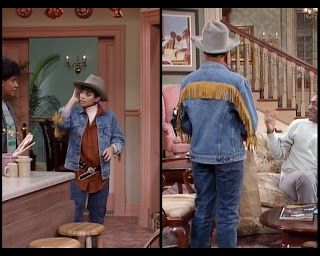 Oh, girl. This Corral is not OK.

Color me confused. The situation here is that Clair and Denise have gone to a pottery class together. Clair wears some beat up old clothes (Cliff's, not her own), but Denise puts on a cowboy costume, complete with Sondra's belt from the opening credits (and episode #2.03). This isn't just a country look. Do you see the fringe on the back of the jacket? The hat?! I get that maybe she's not fond of these items and wouldn't mind getting clay splattered on them, but why in the world would you prepare for your art class by donning full country western regalia for no reason? Stranger still: when she wore this jacket in #2.16, it didn't have fringe. Please tell me she didn't add it just for this. Not to mention, the wide shirt and low belt combine to mimic the shape of a maternity dress. She's not making pottery, she's giving birth to it. 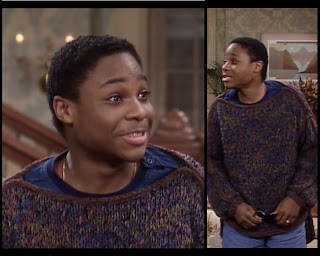 When people say you need to cover your ass, it's just an expression, dude.

Theo seems to be aiming for a modern (for the time) take on the Cosby sweater, but it's a failed effort. I despise tops with a hanging back panel. You don't need a butt flap, gentlemen. Beyond that, the garment exudes a homespun quality. I think it's a combination of the chunky seam and the haphazard choice of craft shop bargain bin yarn. A particularly skilled grandmother could have knitted this for him.. I do like that he paired it with a richly hued shirt, though. Strangely, this isn't his shirt at all: it's his father's from episode #1.19. It looks darker here, but the asymmetrical button on his left shoulder and thin, darkened collar hem are dead giveaways. If it belongs to Cliff, then I can assure you that it does not fit Theo properly. His pants appear to be pajamas or scrubs. Unless sleeping or performing surgery, neither is an acceptable option. 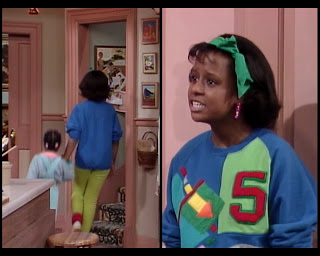 A hand-me-down and a let-down at the same time.

This sweatshirt was Denise's (first seen in episode #1.10), but now it's Vanessa's turn to bring the pain. I'd almost be OK with her carting out green leggings if they didn't clash with the greens in her top. The bunchy red socks are no good, either. The pink earrings would be great with another outfit, but their presence here is all wrong. I guess I don't mind the scarf in her hair. 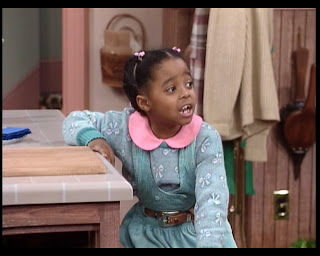 And Rudy pulls up with the best outfit of the week. By default, but still. The cool minty shades of her skirted overalls and sweater coordinate impeccably with the tan belt and bubble gum Peter Pan collar. The bow print and corduroy break up the monotony with texture and also reinforce the youthfulness of the look. Fabulous, dear. 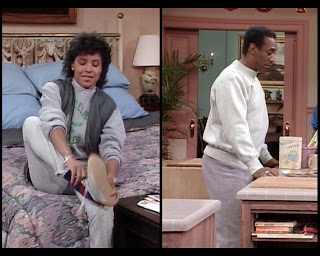 She might get dirty, so I get it. He's receiving a guest. INEXCUSABLE.

Cliff and Clair wear sweats throughout the episode. I'd stop there, except for this: 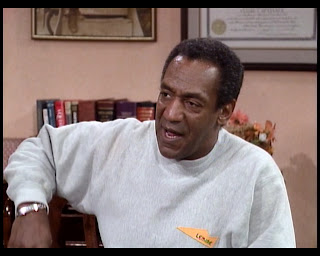 Look closely at the yellow shape on his shirt. See the writing? Does anyone know what "Lemire" references? I sure do: Sarah Lemire, the costume designer for all eight seasons of this show. As a truly obsessive fan of her creations and a completist in my craft as a blogger, I tried to score an interview with Ms. Lemire so that I could get an inside perspective on Huxtable fashions. Though I didn't get a yes out of her, it took four phone calls before she handed me an outright "no," so I like to think that I won her over at least a little. Maybe she's just exceptionally polite and felt bad shooting me down. My aim is that by season five, I'll be the undisputed top Cosby blogger on the entire internet, at which point I can try her one more time. Then again, I'm not entirely sure that my love for her work is reciprocated. Her only comment on my project was the carefully worded observation that it "is certainly extensive." Really, she was nothing but sweet to me, though, and while she might not want me phoning her all the god damned time (I was persistent), she didn't discourage me from continuing my reviews. So here we are. This blog's for you, Sarah.

Asking for donations is awkward, but I pass the hat at the end of each entry in the hopes of breaking even. This project doesn't cost a lot to run, but there are nonetheless associated expenses, and if you want to throw me fifty cents or even a whole dollar, I would certainly appreciate it. If you liked what you read today, please consider clicking the magic yellow button below, which will allow you to contribute a small amount of your choosing.


Thanks, guys. Until next week.
Posted by Unknown at 8:00 AM