There's almost no story to review this week. Peter, the delightfully round and largely silent neighbor boy, is afraid to go to the dentist, so Rudy accompanies him. Hilarity ensues. 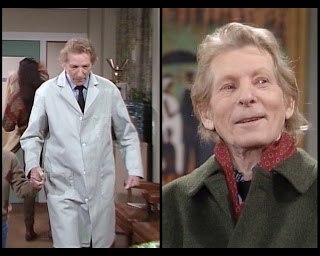 No snarky captions for legends.

The real importance of the episode lies with its guest star. Dr. Burns is played by veteran comic actor Danny Kaye. In fact, this role was his last; he died the following year. To list Mr. Kaye's credits would be something of an undertaking, but he is likely most remembered for his contributions in The Court Jester and White Christmas. Were the dentist played by a less noteworthy performer, I probably would have moved on already. After all, he spends most of the episode in a lab coat, and the final few minutes in an overcoat. The only real flourish is the red patterned scarf against the pine of his jacket. Such a combo works here even though it would usually run the risk of appearing Christmas-y; it's even possible that that the holiday theme is a direct reference to his earlier work. Which would admittedly be kind of cute. 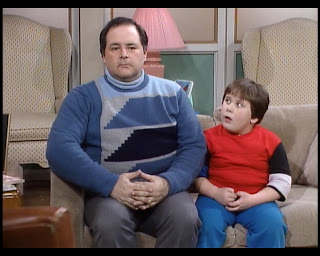 Here we see Peter Chiara and his father, Mr. Chiara, from whom he seems to have inherited his silent roundness. Peter is played by Peter Costa, who appeared in two movies but stopped acting after The Cosby Show ended. He's wearing nothing exciting. It's just a sweatsuit in primary colors that can really only be worn prior to the third grade. His father is played by Barry Moss, whose main job is in casting. As he had previously worked behind the scenes on this show, I assume that someone's passing reference about how he could play Peter's father ended up spiraling into a real-life event. His ensemble surprises me a little. The tonal range is just right: the gray trousers and dull blues of his sweater give a real sense of him as a man that sort of blends into the background. The giant stairway patterns, however, undercut that impression. They lend a "futuristic" quality to the garment that is further heightened by the bunchily ribbed turtleneck collar. My read on this is that they're trying to make his body look as awkwardly shaped as possible, and they've done a good job on that score. 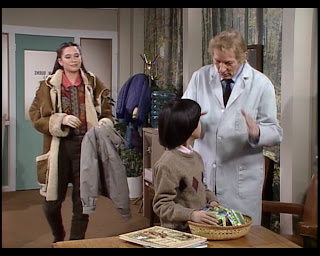 Apropos of nothing: Why did Danny Kaye give the dentist a German accent?

Normally I would have chosen to skip guest stars with as little screen time as these two, but I'm genuinely intrigued by their contributions. Let's start with the little guy: that's Max Barabas playing James, another patient. Prior to this show, he had been in two TV movies. His resume stops after this episode. I'm totally in love with his shirt and sweater. I'd wear this to a party or a date without question. The palest pink of his collar is just the right offset for the earthier sweater, and the few diamonds of deeper tone are clean and compelling. It's a great look.

His mother (who is credited simply as "James' mother") is portrayed by Eli Giaggo. This was her first and last television gig, but she makes an impression. The shearling-lined coat she's wearing stayed around for a while. Debra Messing owned a similar one in the late '90s that my sister was positively desperate to own. Underneath, she's maybe a hair out of bounds with her color choices. I'd say there's one too many shades and would suggest that she remove either the coral or the yellow, though not both. The pattern of her top is a little messy; you kind of have to be Bill Cosby to pull off the Cosby sweater. I love the cut of her pants, though; the structure of her outfit is great and overall I'm happy with the effort. If this is what she wears when she takes her kid to the dentist, I have a feeling she could knock your socks off at a dinner party. 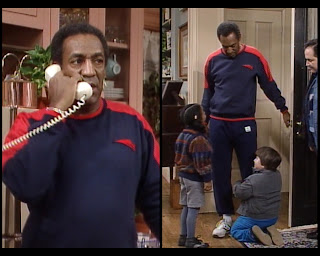 Cliff spends the episode in sweats that we won't discuss. Though I do think it's hilarious that his shirt has a faux pocket square (though not a faux pocket to go with it). These are his dress sweats, it seems. 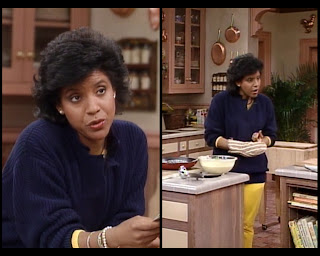 You can take her classy wardrobe, but not her sassy face.

I don't care for Clair's outfit today, but I like that she's trying new things. A navy sweater with canary pants is unheard of from her. I appreciate her attention to detail in matching her undershirt to her pants, but mostly I think this isn't great for her. She's staying at home today, so it's understandable that she would go so casual that her look seems slouchy. But if she were planning on going to the store or something, I'd urge her to change. Everything's too loose on her. At least she classed it up a little with those bracelets, though I'm not sure why she bothered. Maybe to keep up with Cliff's formalwear. 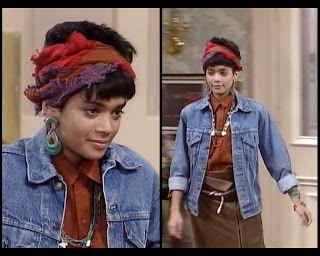 Showing you how it's done. Take note, other Huxtables.

Denise has really hit her stride on this show. Most of what she wears ends up pleasing me greatly. Maybe I'm giving her leeway because I like her; after all, I hated this skirt in episode #2.11 when Sondra wore it, but I'm fine with it now. It's great how she works through the whole red family, using brown and orange as the base but veering into true red and even purple in her head wrap. She's being surprisingly calculated with her proportions: the high skirt is mirrored by the rolled jacket sleeves to create a clean line entirely across her body, denoting a clear waist even when it is hidden my multiple layers of fabric. The foundational garments could seem a little conservative, but she drags them into a hippie space with her accessories like the rope belt and the multiple thin necklaces and even the denim jacket. It's also worth mentioning that those earrings are knockouts because they contrast perfectly with the rest of her attire. All of this is spectacular in my book. 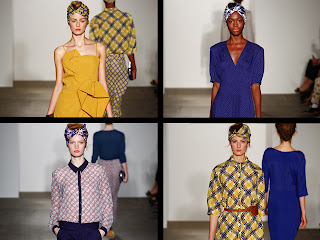 I'll admit that it was difficult for me to find a modern runway parallel to Denise's look. While I thought about highlighting the similarities between her palette choices and the color scheme of Gucci's Pre-Fall 2012 collection, I ultimately thought that the more relevant connection was Karen Walker's prominent use of the matching head scarf in her Spring 2012 Ready-to-Wear line. 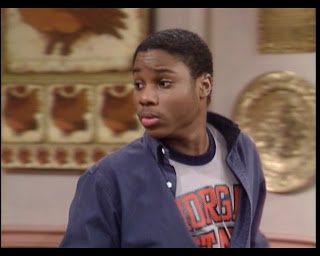 Yes, she did just scoop you as the most fashionable sibling.

Theo is also getting only a brief mention today. He's wearing the same jeans as always, so I didn't even bother to include them. The t-shirt is also not worth mentioning, since it's a sloppy, non-fashion item. So really all we're left with is the midnight poplin shirt, which is totally reasonable, if unremarkable. I bet in a dressier context it looks really nice on him. I'm worried that his older sister is a style vampire, though: as Denise gets more fabulous each week, Theo fades further into the background. This is going to end with her stomping runways while he watches from the audience in a burlap sack. 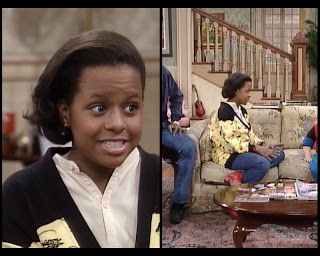 Not best, but getting better.

Vanessa's sweater is another episode #2.11 repeat, as are the shoes. Have you guys noticed how when outfits repeat, they often pull multiple looks from the same previous show? I wonder what the reasoning behind that is. Anyway, her sweater has been dressed down slightly, and now rests against a white shirt and jeans. I like this calmer style; it's a little less "of its time" and thus more applicable in a modern setting. She could wear this to school today and it wouldn't be that weird. 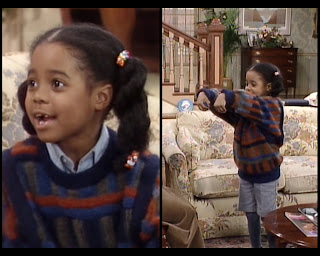 Potentially better than her brother.

And in a surprise twist, Rudy throws down a Cosby sweater of her own! Look at that big, felty mess. It basically turns her into a quilted doll that I just want to hug forever. Extra cuteness points for the shorts-over-tights look. The silhouette that gets consistently larger as it goes up is totally psychotic in what it does to the perception of her body shape. Children should not be built like that. But again, she's the most wildly cherubic figure to emerge from television in the 80s, and even when she has bison torso, I can't help but adore her.

We'll end our trip to Huxtable church by passing the hat. This blog will continue whether or not you donate. But if you want to help me keep it going, I'd certainly appreciate it. I'm suggesting a one-dollar donation, but smaller amounts will also be accepted. (Larger amounts would be accepted, too, but I feel like a buck is a pretty accurate evaluation of this blog's worth to you.) Anyhow, the button below will magically transfer money to me should you decide to offer support. Thanks for reading, lovelies, and I'll see you next Monday.