This week, we are introduced to Cockroach, Theo's frequent partner in crime. When mischief, failure, and embarrassment occur, Cockroach tends to be involved. In his first physical appearance on the show, for instance, he assists Theo in not studying for a test on Macbeth. There's little plot to review, really, so let's just dig right into the couture. 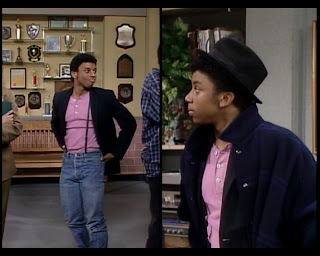 Only once I moved to New York did I realize what a crap nickname "Cockroach" is.

It would seem silly not to start with Cockroach himself. This is Carl Anthony Payne II, who guest starred in 12 episodes, but was apparently fired from the show after refusing Bill Cosby's request to get a haircut. Besides this role, he is probably best known for portraying Cole on Martin. His character brings a real shabby-chic sensibility to his wardrobe, pairing mundane or crappy items with more fashionable pieces to create a solid look. Part of me wonders if these garments hint at status: not every family is as rich as the Huxtables. His foundation here is unremarkable: the jeans are practically featureless, and the pink thermal shirt is cute only if you ignore the fact that it's basically pajamas. But then you throw in thin suspenders, a funky blazer, and maybe a jaunty hat, and suddenly you're in business. This is another one of those cases where you realize that the children today don't even know that they're dressing how they dress because The Cosby Show told them to. 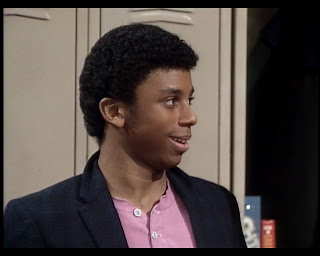 I'll sleep easier if I pretend the semi-popped collar is accidental.

The blazer is worth a closer look because it tricks you. From a distance, it seems like a flat black or deep navy. In fact, it's an extremely dark blue-and-green plaid. While it "matches" the undershirt only by brute force, I can't help but enjoy the audacity of the combination. It's ugly, but it's good ugly. 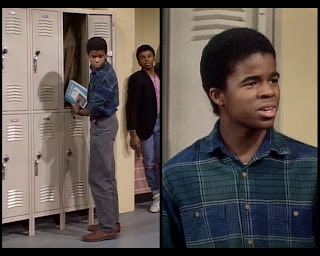 Teenagers make me uncomfortable. There, I said it.

Claude Brooks appears briefly at the beginning of the episode as Donny, another classmate. I perused his IMDb page and didn't see anything that really jumped out at me. He's a working actor who has played a few roles in a few things here and there. Anyhow, I'm not feeling this outfit for him. The pattern of his shirt is too fussy. There's a lot of business going on with the different crosshatchings of the colors, and the contrasting buttons just add to the frenzy. The gray in his pants works against the blue and green, but I can't tell if he's tugged the waist up too high or if he possibly has freakishly long legs. The shoes are an affront to decency: the color is drab and the style is geriatric. 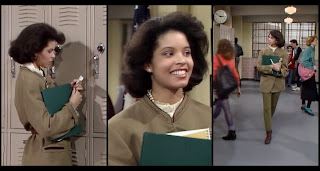 Oh honey, who did this to your hair and why? And how?

Theo's romantic target of the week is Teresa, played by Traci Wolfe. Her brief acting career included this job, a single appearance on In the Heat of the Night, and a role in all four Lethal Weapon movies as one of Murtaugh's children. It doesn't make a ton of sense that a new student would materialize halfway through the school year (or that she would be so blazingly happy about it), but here she is, all smiles and uniform olive tones. Her getup makes me think that she's going on a turn-of-the-century safari. It's a very Denise way of looking at clothes; she's exuding that costume-y quality. Like Donny above, she's made choices that read far too old. The hair is squarely in grandmother territory, and the prim details like the pearls and black embellishments around the pocket and collar just add to the problem. The belt over her coat feels a little forced. She's obviously trying to make an impact on her first day, but I'll bet she got mistaken for a substitute teacher six or seven times before she went home. 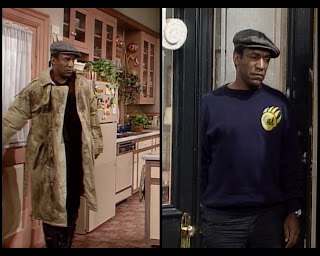 Dr. Huxtable gets two looks, but the first is just snowgear (topped by his episode #1.17 hat) so we'll move on without further comment. 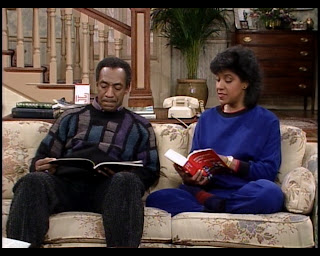 Clair's pronunciation of Macbeth in this scene pleases me thoroughly.

I find this look to be so delightful. The palette of that sweater is wonderfully balanced; the amethyst, dusty turquoise, and gray sit at a nice midpoint between boisterous and bland. The broken vertical stripes are interesting without taking off into crazytown, and the black foundation on which it all rests seems subtle rather than boring. I included Clair in this shot just to show the episode #1.5 sweatsuit that I won't be re-reviewing. 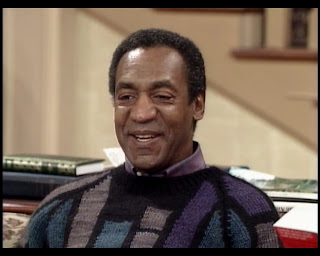 Cliff likes it too, I guess.

This close shot of Cliff allows us to appreciate the shirt beneath his sweater. It's a great shade for him, and the delicate pattern of it reads almost like iridescence. J'adore. 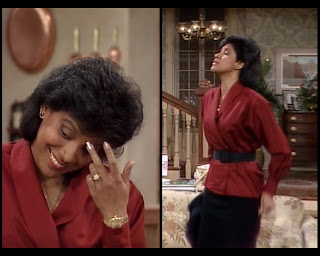 She's holding a sewing project; her skirt does not have a side-bustle.

Apologies: these are unflattering shots of Phylicia Rashad, but we've been doing this for long enough that her beauty should be more than apparent. My focus here is on the clothes, not the woman wearing them. And what I can say about the clothes is that Clair rocks a deep red wrap blouse hard. The shape of the garment complements the shape of her body perfectly, while the collar, the hang of her sleeves, and the sheen of the fabric all serve to keep this breathtakingly classy. The black skirt is appropriate in its length and tailoring, and the matching belt keeps it simple in terms of tonal variance while continuing to boost the business sexy vibe she's giving off. I chose this awkward close-up because it highlights that perfect pearlescent nail polish she's sporting. Tens all around, Mrs. Huxtable. 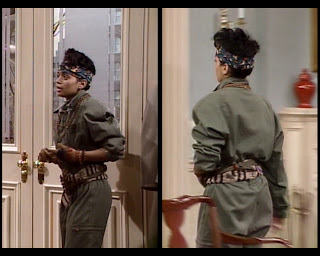 In one of her boldest moves yet, Denise appears in what I'm almost positive is a regulation Air Force flight suit. This episode aired months before Top Gun hit theaters, so her selection has nothing to do with pop culture references and everything to do with awesome creativity. To freshen up what is essentially a boring sack from the surplus store, she goes for broke on the accessories, looping her head and waist with wild prints and donning every beaded bracelet and necklace she owns. The impact is outstanding, because she's fashionable in this totally alien way. Women are constantly pushed to conform to the standards of the male gaze, and Denise's perspective actively pushes back. Her look isn't about being sexy, it's about being awesome. She's not wearing what some dude will approve of, and that rejection of conventional sexiness is what makes her seem so audacious. 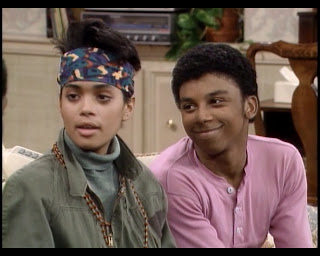 His character on Martin also mentions being attracted to Lisa Bonet at least once.

Cockroach still finds her pretty compelling. The close-up shows us how the patterning of her wrap hints at camouflage, adding some wit to her selections. I like that turtleneck under the coveralls, though I wish it matched just a little more or a lot less. Cozy, covered, confident: this woman is a revolution. 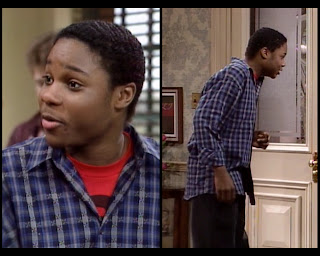 Theo isn't scoring a ton of points with me, mostly because I think he can do better than red, royal blue, light gray, and black. That's a dull set of crayons to color with, kid. He's giving a touch of pizzazz with the little pinwheels livening up the plaid in his shirt, but this isn't much of an outfit, really. Clunky, pedestrian, poorly planned. I'm surprised that Teresa accepted a date with him; based on clothing choices, I'd have hit up Cockroach this time around. 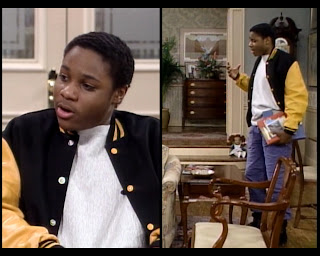 I'm running out of ways to express my boredom here, Theo.

He appears later in snow pants and a white sweatshirt. No more need be said about it. 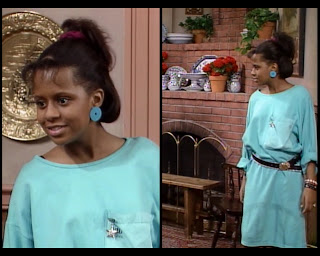 Lastly, we have Vanessa, serving a dress reminiscent of her pilot episode teal number. It's obviously not the same garment, but I couldn't let the similarity go without comment. There's a certain languid appeal to this look. She's headed in the right direction with the belted XXL tee situation. The details trip her up, though. Whereas Denise used accessorization to her advantage, Vanessa just tosses a bunch of crap everywhere. The dress shouldn't have a pocket at all, and especially shouldn't have a star charm to emphasize it. For a girl who owns a million belts, she sure doesn't know how to pick them, because this boldly bedazzled one doesn't work here at all. I could have done with a little less bracelet, too. This isn't the sort of style that can support a lot of business. Just let it be slumpy and casual. 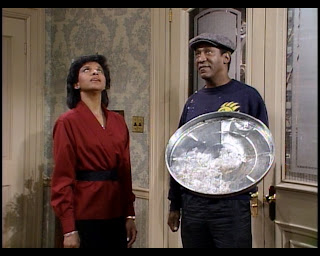 This is like The Cosby Show through the lens of a Family Guy flashback.

I don't have anything to add, I just like the absurdity of this screencap.

As always, I'll close out with my standard message about money. Huxtable Hotness is a labor of love for which I expect no thanks and from which I expect no profit. I provide a donation link only because the DVDs cost money, and without them I can't capture images of the outfits. If you feel like donating a dollar, the button below will allow you to do so. If not, I hope that you will at least continue to check back and read each week's entry. Thanks for sticking with me, kids. Until next Monday!