Even when we have experienced a loss, we continue to celebrate life by experiencing joy.

This season has already been peppered with references to Theo's extra-tough math teacher, Mrs. Westlake. Tonight, she makes an in-person appearance: after her ominous call to the house to request a meeting, Dr. Huxtable invites her to dinner with the family. Has she come to eviscerate Theo for poor performance on his recent test? Does she harbor even darker intent? Is she a good witch or a bad witch?

Usually, I start off with guest stars. Since so much of this week's episode is built on the suspense of Mrs. Westlake's arrival, however, I think it's only appropriate to save her for last. Instead, we'll start with Theo, since he gets two outfits this week. 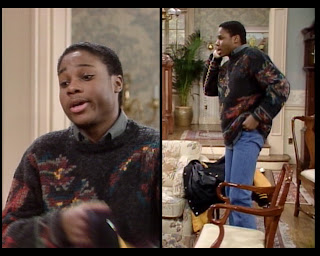 I don't know. Something about Lisbeth Salander? I'm low on captions today.

He saves me a little time up front by making one of his looks a repeat. You can check my entry on episode #2.7 if you want some real talk about this sweater. 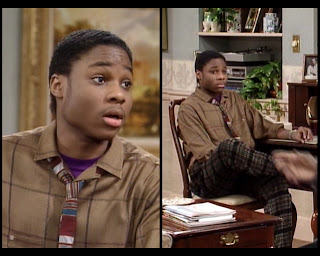 Sad, then mad, in plaid.

This ensemble confuses me. Previously, we've been led to believe that Theo is a snappy dresser. He's delivered several successful formal looks, yet this is a mess, and seems to be messy intentionally. It's the loosened tie that tips me off. The deliberate disarray of the clashing colors and patters suggests that he was working to impress his teacher with more adult stylings but missed the mark. It doesn't make sense. These choices are at odds with his usually keen eye for aesthetics. Look at how the turquoise stripe in his pants fights against the hues in his tie, which in turn battle with his purple undershirt (which shouldn't be visible anyway because the tie should be tightened around a closed top button). The taupe of the shirt is wrong against his skin and worse against the gray and black plaid of the trousers. I'm concerned not only because the outfit is bad, but also because it shouldn't be bad. Even when he's nervous, he should know how to dress himself. The story being presented to us is inconsistent with the character as we know him. 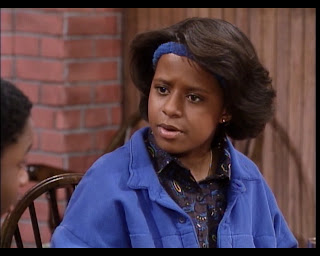 Vanessa doesn't stand up today either, so we're once again discussing only the clothing visible from the rib cage upward. She wore this shirt briefly in episode #2.7, but our view of it at the time wasn't particularly clear. Thank goodness for these shiny new DVDs, which have noticeably increased the quality of this blog's screen captures! I'm loving this girl's continued love of prints. Judging by her tonal range here, she might also love Prince. Not hating on purple paisley, just pointing out a similarity. While the felty-looking jacket and headband aren't ideal, she's gone with a more subdued effort this time around, and I condone that. Her wardrobe can get outlandish, and this is positively Amish in comparison to some of her bolder contributions. 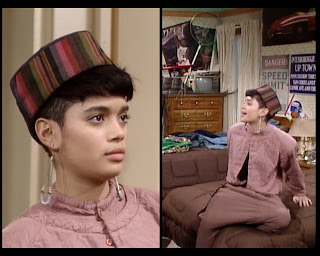 With her little sister reining it in, Denise decides to go the extra mile with some Middle Eastern and North African inspiration. The shades of mauve lend some warmth to her cheeks and lips and playfully contrast traditional girlishness with the less mainstream nature of her influences. Pulling double duty, the harem pants both enhance the worldly appeal of the outfit and steer her toward a more hip-hop sensibility. The greens and yellows in the hat are just wild enough, managing to leap to the opposite end of the color wheel without being loud or showy. I'm a little dubious about the length of the earrings, but she's overall done quite well for herself here. This same point of reference made a bit of a resurgence with 3.1 Phillip Lim's menswear line this season. 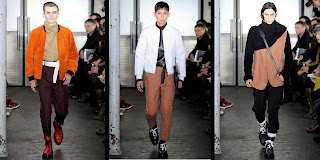 The cut of the pants on the first model in particular has a harem-y feel; also, look at the shape of their necklines and the split in the second dude's jacket. Denise wasn't so far from here. 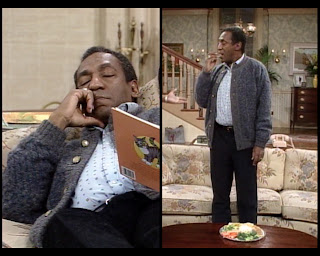 That book jutting into the frame is the only Rudy reference this week. Sad.

Cliff has thrown down several cardigans this season, perhaps in a passive-aggressive effort to shame his wife for last season's theft. I envision him throwing down baiting comments in the morning as he digs through the stacks of knitwear: "Clair, have you seen that lavender cardigan? I know it's in here somewhere." He's letting her know that he knows. In terms of overall style, he's scaled it back tonight. I'd say it was because he's going to meet one of Theo's teachers for the first time, but he was wearing this before she called. His motivations will remain unknown. The textured top layer brings in a little personality, and there are a few hints of brighter color in his shirt's pattern, but mostly this is plainer than I'd like. The good doctor has more in him. Also, the placement of his belt with the tucked shirt makes him look heavier than he is. One is seldom trying to accentuate the belly. 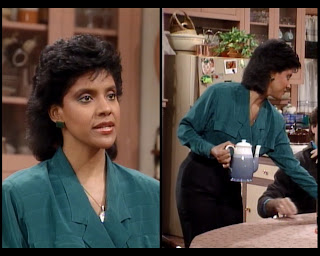 Those earrings have been around a lot this season, too. So much stasis!

It's tough to be certain, because the lighting makes it look darker here, but based on the wrappy construction and the shape of the collar, I'm thinking this is the same top Clair wore in episode #2.9 (and also in #2.8, it seems, though I missed that in my earlier entry). This is its first appearance without a blazer covering it, though, so I'll give it a little notice. It's not my favorite of her shirts, really. The big, rectangular pockets do odd things to the shape of her chest, and the light horizontal pattern makes the fabric look cheap to me for some reason. Also, why is wardrobe not investing in new pieces for Clair? She's worth it. 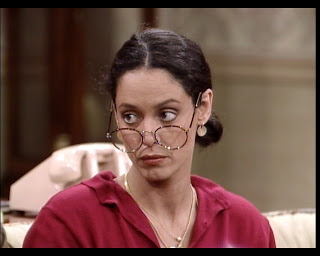 OH NO THE DRAGON LADY IS HERE 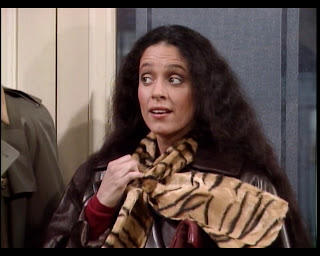 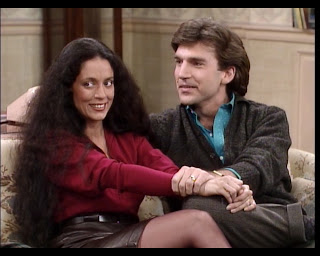 Their love knows no hair clippers.

So the episode's big surprises are that 1) Anna Maria Westlake oozes charm and seductiveness because she has long gorgeous hair and speaks in an alluring Brazilian accent, and 2) she wants to meet with Dr. Huxtable because she'd like for him to be her obstetrician. This reveal actually brings out a third surprise: Clair speaks Portuguese in addition to Spanish and English, because she can DO EVERYTHING. In season five, I'm expecting her to build a spacecraft in the garage and change the weather with her icy glare.

Anyhow, back to the task at hand. We'll start with Jack Westlake, the handsome-enough and charming-enough but ultimately secondary half of this couple. He's played by Matt Williams, who actually isn't primarily an actor. In addition to writing several episodes of The Cosby Show, he created and executive produced Roseanne, as well as co-creating and co-producing Home Improvement. His shirt/cardigan pairing is pretty great in my eyes. If I could get away with wearing that electric blue, I'd match it with charcoal all the time. It just looks right. The pants should be a different color, though: I like that he calls the gray back when he gets down to the socks, but an outfit shouldn't be all the same shade throughout, you know? It's OK if it doesn't all match. Clearly, Anna Maria is not the kind of woman who dresses her husband.

Sonia Braga plays the episode's title character. You may remember her as Sophia Vargas on Alias or Samantha's girlfriend Maria during that arc on Sex and the City when Kim Cattrall's character experimented with bisexuality. She looks kind of phenomenal here. The goal was clearly to make her sexy: rich red top, leather skirt, seemingly purple tights... it's a very '80s version of hot, but it works. The Victorian cut of her sleeves, with the balloon from the shoulders that snaps tight at the elbow, helps build a little more class into the ensemble. The skirt looks shorter in that screencap than it really is; when she stands, it hits her knees. If the hem really landed mid-thigh, then it would be inappropriate for a first-time meeting with her student's parents. Then again, Cliff's going to get pretty familiar with Mrs. Westlake's downstairs area over the next few months, so perhaps it's futile to talk about boundaries in that context.

And there you have it, our first episode in the DVD era. I can't believe I waited to be forced into this transition. Grabbing the screencaps was much, much easier, and the quality is visibly improved. Thank you, thank you, thank you to all the generous readers who donated their hard-earned cash to make this happen. If you'd like to throw a little money into the cup to support this blog, I will put it toward the purchase of future seasons of the show. (There are eight total, and I intend to review them all.) A dollar, or even fifty cents, makes a huge difference.