I have previously discussed a key tenet of Cosbology which posits that a Huxtable's stylishness increases in proportion to that person's distance from home. While watching this week's episode, I began forming a second theorem: the funnier the dialogue, the worse the outfit. This one still needs some kinks worked out (Sondra, for instance, is routinely dressed like a school principal from the nation's breadbasket, and still has yet to utter a funny line), but there's something there. In today's story, Denise's friend asks Dr. Huxtable to check out a medical problem because she's afraid to tell her parents. After resolving the girl's issue, he calls a family meeting that quickly becomes hilarious. No one's really knocking it out of the park in terms of outfits, but it's worth a watch just to hear the family hash out their approach to difficult discussions. 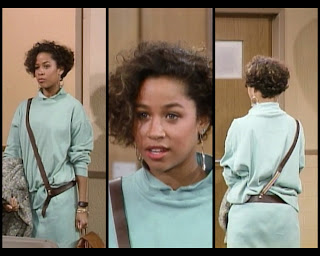 It's just a bladder infection; the maternity top is a red herring.

Denise's friend, who chooses to remain anonymous, is portrayed by Stacey Dash. Now bear in mind, this was filmed a full decade before Clueless, in which Miss Dash was still playing a teenager. While I'm impressed with her ability to stop time, I'm more hesitant in endorsing her clothing choices. In terms of color, she does well with the seafoam, giving a hint of green to bring out her eyes. The details are off, though: poor tailoring gives her a dumpier figure than she actually possesses, and the bizarre collar somehow straddles the line between mock turtleneck and Peter Pan. The real standout here, though, is the shoulder-braced belt. I really don't know what to make of it. I feel that its outright brazenness deserves some credit; it's definitely unexpected. The element of surprise isn't necessarily enough to save her, though. Mostly, it just looks like she's wearing a purse, only there's no purse there. In fact, the strap actually prevents her from wearing anything else over her shoulder without looking sort of odd, which is why she's forced to resort to that handbag. It was a nice try, but I think society made the right choice in opting not to adopt this particular flourish on the regular.

A couple more things about her before we move on. One: she's in the Community Center from episode #1.23, so that's still a thing. Two: she's giving off a Whitney groove with that hair, am I right? 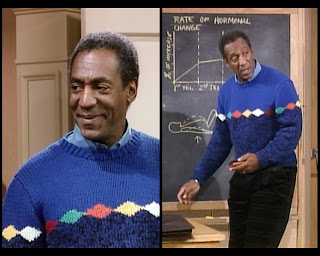 A graph and a diagram. SCIENCE!

Oh, Cliff. We've got to start right off by talking about those disastrous pants. I can't spare you with praise first; they demand immediate attention. I'm forced to guess here, because I don't have access to the actual garment, but it seems fairly certain that we're looking at a faux velvet or velour situation. And yes, those are horizontal indentations, and yes, that is nauseating. Stepping away from that as quickly as possible because ew, we're left with a Cosby sweater up top. It's not the loudest of his choices, but it's clearly two separate sweaters joined with a seam of largely unrelated colors, basically forcing you to acknowledge the fact that he refuses to abide by the rules of modern knitwear. Given the use of pastels in that row of diamonds, I'm surprised and a little disappointed that he didn't provide a more vibrant hue in the shirt to add contrast. A paler blue is hardly the best option. This would have been the perfect time for a yellow or coral. 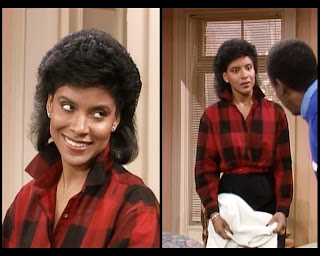 This shirt is in the same vein as Clair's episode #1.10 sack. She's on the right track in her efforts to give the look a little more shape, but the top is still too large and ends up making her sort of lumberjack-y in her appearance. Fratboy lumberjack-y, what with the popped collar and all. I love the red belt and pants, though; her lower half is much more successful in displaying her proportions in a flattering manner. The only other thing to mention about her look is this: 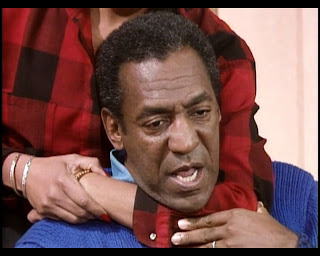 Gold watch, silver bracelets. Bad form. Oh, side note: Cliff is being strangled for his poor memory about the night he proposed to his wife. One of the questions he failed was what color sweater she wore. Though the correct answer was white, he guessed purple. I'd like to come to his defense on that one: he's watched this woman wear a constant string of purple tops for something like 30 years. One can hardly blame him for forming the perception that Clair has only ever worn that shade. She's become practically synonymous with purple in everyone else's mind, right? It's not just me? 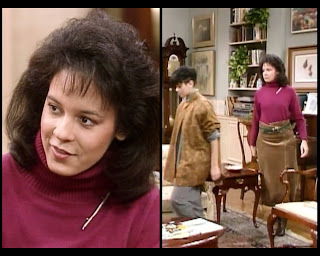 Shouldn't you be at Princeton or something?

Oh, Sondra. You continue to be a character on this show. How nice for us. And yet, I'm going to toss her a rare compliment: I think this raspberry/tan/hunter green palette situation is verging on greatness. On its own, I'd even offer unmitigated praise for the turtleneck. She's deep into Wrongsville with that skirt, though. It's so bulky it may as well be a towel. I mean, it's going over her sweater. There's never a reason to tuck in a top that thick. It's a decision that guarantees excessive wideness. You don't need hips that broad unless you plan on giving live birth to a brontosaurus. Also, we've seen that weird, minimalist pin before. On Clair, in episode #1.7. This girl is more than just annoying: she's a thief. 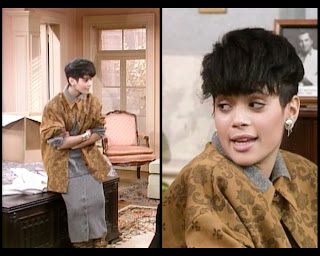 It's like a theater mullet: comedy on the side, tragedy in the front.

As it turns out, Denise wasn't wearing a gray sweater dress last week, but a matching knit top and skirt. I don't know that I love the idea of a standalone skirt that buttons all the way up the front. It's kind of Puritanical and lewd all at once. The ochre number with the black flourishes is great, but this is an instance in which oversized clothing isn't helping her. It looks too big and slouchy when paired with such comfy, loungey pieces beneath it. If she had contrasted all that richness on top with a fitted skirt that didn't practically hit the floor, I might be feeling it. Now, the hair: in profile, it's kind of killer, but then that head-on shot is just a horror show. 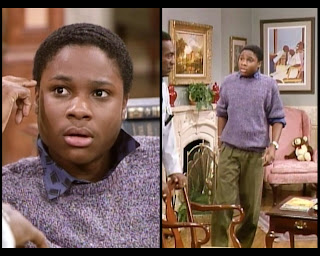 He spends most of the episode dumbfounded.

Theo brings back the pants (and overall palette) from episode #2.5, and the sweater from #1.18, leaving me with little to say that wouldn't be repetitious. The detailing on that collar is nice, even if the bluer shade is a little wonky against the pinker undertone in the wool. And, you know, pleats, rolled sleeves, et cetera. You notice this stuff without me saying it by now, I'm sure. 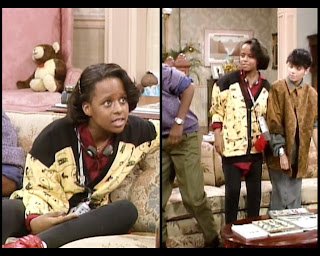 She spends most of every episode dumbfounded.

Vanessa has done the red/yellow thing a few times before. It's not foolproof by any means, but she's young and sassy and the aesthetic sort of works for her. She's giving us another one of her patterns, too, but I feel good about this one. It's understated, at least by her standards. Truthfully, I'm happy with this look. It's very '80s, from the giant red kicks to the leggings to the broad, broad top, but it holds up alright. I'm a little nervous about the black patches that highlight how heavily padded her shoulders are. Otherwise, this is sort of playful and fun, and not out of place on a certain type of youth today.

And now for the bad news.

As some of you may have noticed by now, Netflix has removed The Cosby Show from its roster of streaming options. Thus, I'll need physical DVDs to continue this blog. I hadn't intended on spending money on this project (just a great deal of time), but I'm willing to do it because... well, don't make me think too hard about it. Still, the cost was unforeseen and I'm not a wealthy man. If you enjoy this blog, please consider donating a dollar to the cause. Just a buck, really, I'm not asking you to send me a boxed set of discs or anything. Since this has officially become a place where I beg for money, I've removed the ads from the site. They weren't exactly hauling in major coinage anyway.

Thanks for tolerating this flagrant, embarrassing plea. See you next week.
Posted by Unknown at 8:00 AM