Today, we get introduced to the other members of the Hanks clan. Clair's sister Sarah just got engaged, so the family gathers to talk about wedding plans, play chess, and tease each other. Not a ton happens, though it's great to hear Denise talk about her disdain for traditional marriage, and Clair's song with her father at the end is lovely. 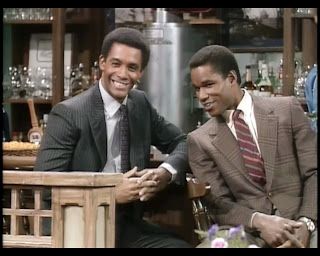 If the Occupy movement existed back then, Denise would have protested these guys.

The episode begins with these two suave dudes putting the moves on Clair and Sarah in the restaurant where they're eating lunch. On the left is Jeff Mooring, playing Greg. You might recognize him as Dave from Sports Night or Reporter Phil from The West Wing. He looks pretty classy in his pin-striped suit. It's a tough look to fail at, honestly. On the right is Russell Curry, who has held recurring roles on Santa Barbara and Sunset Beach, two shows I've never even heard of. The IMDb credits him as Tad, though I could have sworn he said Thad when he introduced himself. I'm not particularly fond of either name, though they were both popular in the 80s for some reason. He's going a little riskier with his outfit, and it's veering slightly toward used car salesman territory. It's not clownish, but it's a hair louder than it needs to be. I might have been a little safer with the tie if I were wearing a plaid blazer, but that's just me. 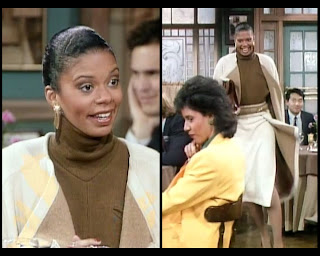 I was going to speculate about her age in relation to Clair's, but the
data points in that area are convoluted enough already.

Continuing with guest appearances, Yvonne Erwin plays Clair's sister Sarah, a role she will reprise once more before the series ends. Her resume is pretty sad stuff; the only thing you might have actually seen is Crocodile Dundee, where she has an uncredited appearance dancing in the bakcground with her twin sister. At least she has achieved internet immortality in this blog now. (I'm sure she'd be just thrilled to know that.) Anyhow, she starts off the episode in a pretty interesting getup. The cream exterior and tan lining provide a nice, calm foundation for the showier detailing in the nontraditional lapel and dangerously high split in her skirt. From there, things get a little intense, though: the height of the turtleneck makes her look like she has extra vertebrae, and the too-tight bun gives her an odd cranial shape. It gets a little alien, particularly with the sci-fi seams on that top. Doesn't her head look too small in the long shot? I'm not saying she is deformed, just that the styling isn't doing her any favors. 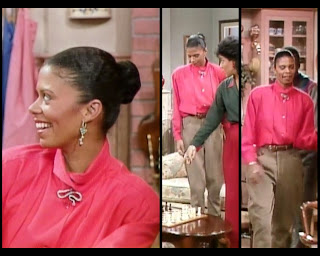 The long shots really highlight how hard the clothes are working
to give her form a less humanoid appearance.

Her second look is a similar mix of good and bad. That screaming pink is fabulous, and the mini-cowl thing she has going on with the neckline is a better look for her. On the other hand, the top's overall proportions are ludicrous, and since she's rocking the tiny-head bun again, the sizing is still a pronounced challenge. Proportions come into play with the trousers, too, though it was tough to really convey that through the images I was able to capture. She has a riding pants thing happening, where they're super chunky up top and then way tapered from the knee down. I'm not sure if the intention here was to mimic aristocracy or what, but I'm not feeling it. Getting down to the jewelry, it's again a mixed bag. The brooch at her neck that she stole from the set of The Neverending Story? A little bit great. The earrings? A poor match, and also ugly even by themselves. Next time, Sarah, we're going to aim for consistency. I feel like even "all terrible" is better than "some terrible and some great." 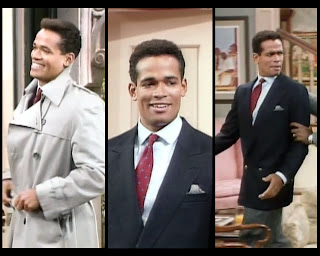 You better lock that down, Sarah.

You know who Sarah's going to marry? Mario Van Peebles. Well, she's marrying "Garvin," but you know what I mean. Let's start with the obvious: he's mad handsome. Also obvious: while he's a snappy dresser, he's keeping it pretty standard. Navy blazer, red tie? We've all seen it. You can coast with outfits like this when you're handsome. I included the trench coat so that you could see it, but not because I have anything to add. It is what it is. 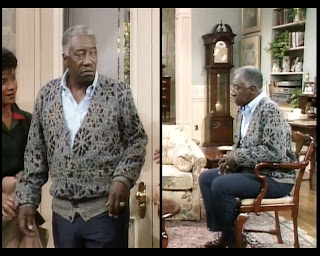 The stalwart patriarch Al Hanks is played by jazz great Joe Williams. His album Nothin' but the Blues had won a Grammy the year before this episode aired, but his career spanned a good three decades before that. His fashion choices err a little more toward comfort than class. Whereas Cliff's father is rarely seen without a tie, Clair's dad even unbuttons his top button. Wantonness! The snowflake pattern is also showier than Russell would probably get, but by contrast the gray-and-navy palette is much calmer. While he still looks nice, he gives the impression that he cares less about his clothes: he's a man who doesn't need to impress you with his fashion sense. The functional nature of his attire gives him the air of a no-nonsense straight-shooter. 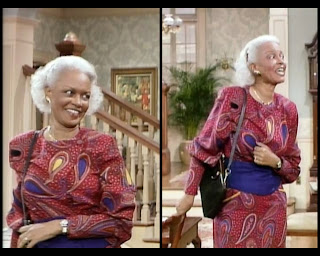 Ethel Ayler returns with a far more reasonable hairdo. In fact, she's pretty much delivering a replica of Vanessa's season one back-pompadour, meaning that Clair intentionally gave her daughter an old lady's coiffure. As for the dress, I'm loving it more than I thought I would initially. A paisley of that size could basically wear you, especially in this loud a color scheme, but somehow Carrie owns it. That giant sash belt helps a lot by providing a break in the action while continuing to deliver a powerful, passionate purple. The shoulder pads here almost work because, when paired with the ballooned-then-tapered sleeve, they're very 1890s. Going back that far for inspiration is kind of badass. Tailoring like that was already vintage when this woman was born. Looking for a recent foray into loud, long-sleeved print dresses with conservative necklines and a divider at the waist? Proenza Schouler has you covered. 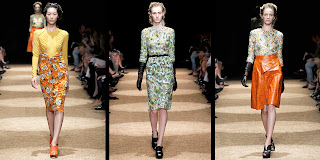 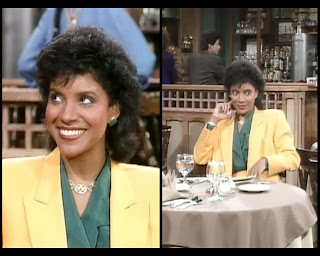 A woman this glorious shouldn't be surprised to get hit on. Ever.

The facial expressions you're seeing here are so much better in context. That wider shot is the look she gives after she notices T(h)ad checking her out, but the close-up is the real killer. When he tells her how beautiful she is, she tosses back a hellaciously flirtatious "thank you" while smiling like that. She barely moves her mouth. It's sex-riddled ventriloquism, basically. Now, on to the clothes. Someone backstage at this show is a fan of solid colors. Perhaps Phylicia Rashad herself. (Side note: I learned this week that she pronounces her name as though it rhymes with "militia," not "Saleisha" like I've been saying it. I'm assuming that if you read this blog, you know who Saleisha is.) Anyhow, while I love this piercing yellow next to the forest green, I still can't help but wish that the two were intermingled a little more. Keeping everything so flat sort of robs the outfit of interest. Beyond the more daring hues, this is what you'd expect from Clair: slightly big blazer, flowy blouse with demure lapels, fun, chunky jewelry. The skirt is sitting a little high, but I like to think that she'd adjust it when she stood up. We don't ever see this happen, so speculation and mysteries abound.

Speaking of speculation: what if I told you that Clair's second outfit paired this same green with a bright red? What would you picture? 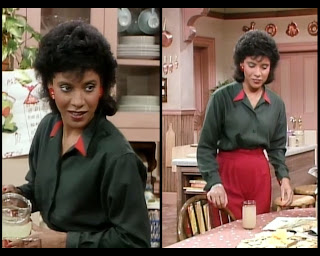 We need to reconsider the placement of that lemonade glass.

Admit it, she doesn't look nearly as much like a Christmas tree as you thought she might. I love how we've never seen her in this pine shade before, and then all of a sudden she rocks it twice in one episode. It suits her, I'm not criticizing, I just wanted to take note. Anyhow, the shirt itself is structurally pretty average, with the obvious exception of that collar detail. It's a well-intended flourish, but leaping to the exact opposite end of the color wheel was maybe a bit drastic. Next time, scale it back. I get that she wanted to match the pants, and there's a logic to that choice, because this color pairing defies expectations by being kind of appealing. Even so, it's not quite coming together for me. I guess the collar works at a conceptual level, but falls apart under detailed scrutiny. It would be negligent not to take a moment to highlight how high those pants are riding, creating the impression that her pelvis is spherical. 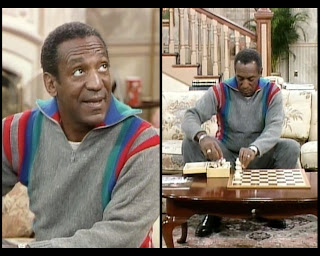 Is that a chess set? Just wanted to check, mate... See what I did there?

Cliff, unable to decide between a loud sweater and a loud pair of suspenders, goes for a piece that incorporates both, essentially. 80 percent of this is gray and unworthy of commentary, but then we've got those vertical stripes running from each shoulder. The combination of colors and flared collar reads a little 70s to me, but I'm not against it. This is a not-terrible outfit. A different pair of pants would have won me over more completely (how much gray am I to permit?), but this will do. 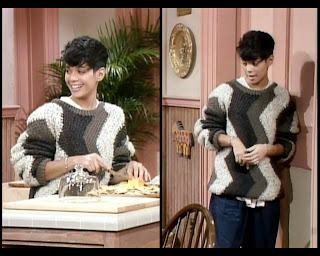 We never see Denise get hit on, but I'm sure it happens.

I see this hairstyle on people of both genders every day when I walk down the street. Dear Brooklyn: you're copying Denise Huxtable. Like, all the time, and not just because of her 'do this episode. This big fat sweater with its big fat pattern is a big fat success, but the blue Hefty bag that she's made into pants comes close to ruining the whole thing. Oh well. 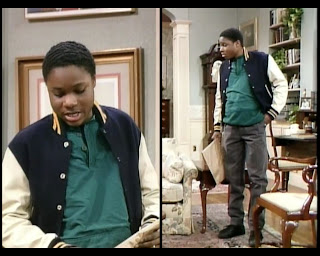 Wow, when Theo gets boring, he gets really boring. It's a shame, because he has the potential to knock my socks off, and then he'll turn around and be all, "t-shirt and jeans, whatever whatever." Whatever is right, dude. I have nothing to contribute. 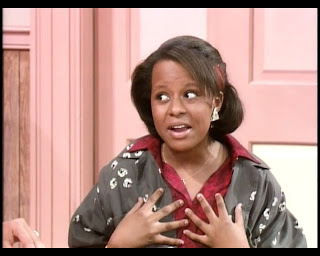 With these outfits, the less you know, the better.

This is another situation in which a character does not get up from the table, leaving me with an incomplete data set on which to base my conclusions. From what I can see, Vanessa has exceeded expectations here. The two shirts complement each other wonderfully; the colors are stunning, and the busier print underneath is nicely offset by the subtler white flowers on the outer layer. It's bulky, but I can forgive it a little since she's layering and we can pretend that the obscured shirt is well tailored. Of course, the whole thing could be shot to hell when she stands, but for now this is a pretty classy showing. This palette gets extra love from me, because it would work as well for office attire as it does for a tween's school clothes.

And with that, we conclude another journey into the wild and dangerous world of 80s styling. I'm glad you're all still here with me. Oh, and if you hadn't noticed already, I put on my big boy pants and registered a domain name, so this blog officially exists as huxtablehotness.com now. Update your bookmarks accordingly! Tell your friends! Later, kids.
Posted by Unknown at 8:00 AM