Uh-oh. A certain boundary-testing teenager just got her license and has her eyes on a car. This is the kind of episode that probably resonated quite well with financially comfortable parents who were really interested in the humor that comes with helping your kid purchase a vehicle. The rest of us were left in the dust, however, because who wants to watch half an hour of price negotiations? It's a rite of passage, I suppose they made a valiant effort to turn it into something amusing. And in Mr. Cosby's defense, his line about the car saying "What?" was one of the funniest things I've ever heard from this show. Anyway, most of the episode is a wash for fashion, so we'd better forge ahead. 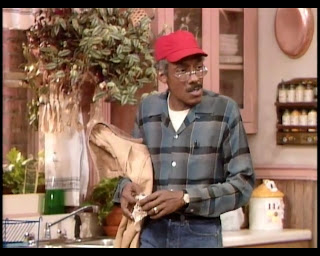 David Langston Smyrl is back again, reprising his role as Mr. Lucas the handyman. His presence gives the Huxtables access to a sturdy newel post and an affordable car. He doesn't even make inappropriate passes at Clair this time around. What a guy! He's not giving me much to say in terms of style critique. I do like the offbeat plaid on his shirt. Its size is enticing, and the way the horizontal and vertical shades don't match precisely is also great. Other than that, it's standard stuff. He's in work clothes, after all: too baggy, doesn't really match, yadda yadda. He's fixing stuff, it's not exactly time to bust out the Prada. 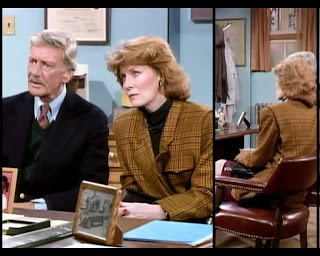 These people are going to have a baby. No, but for real.

Guest stars can be fun, but they often bore me. Such is the case with Paul Harding, a character actor whose resume lists a smattering of jobs at about this caliber. His costume is standard-issue older dude duds. I have nothing to report about it. Ann Flood, who pops up occasionally in various soap operas, fares better in terms of attire. Let's start with the skirt, which you can barely see: it's maroon, which is surprising, and falls above the knee, which is a little sassy. It might even be tight-ish, though that's tough to say without seeing her stand up. The mustard plaid blazer is a smart match; in this context, I even kind of enjoy the padded shoulders. Something about the overall shape of the jacket just feels right. Again, this is contingent on someone having the sense to tailor the waist rather than leave the whole thing boxy, and the truth is that nothing in previous episodes should lead me to believe that this has happened. Underneath, her black turtleneck provides an appropriately neutral background for the showier parts of her outfit, and the black necklace (or is that just part of the shirt?) adds some depth without distracting. I think something like this could be made to work in a modern setting. Not easily, but it could be done. Provided you dial down the blush. Like, a lot. 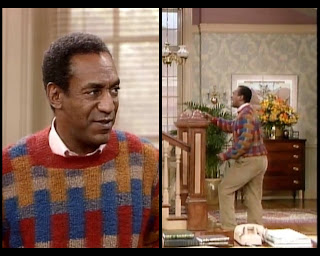 The Sweatergeist is upon us.

Khakis and a white button down? Good, fine, whatever. The Cosby sweater here is pretty mind-bending, though. I don't know how exactly to describe what's happening with these colors. It's as though we're seeing alternating vertical bands of two different horizontal stripe scenarios. The specific shades hardly matter; while I normally wouldn't put such disparate hues together, I think in this case it's helpful to see clear differentiation. Like, that part across the middle where the two similar blues line up? It just stops making sense altogether. Does this make anyone else's eyes hurt? It's just too weird and I can't. 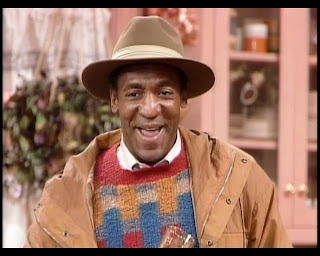 You can almost hear the "b'daaawwww" he's probably making.

He jumps back in later with last week's coat and an Indiana Jones hat. The latter is a mistake. 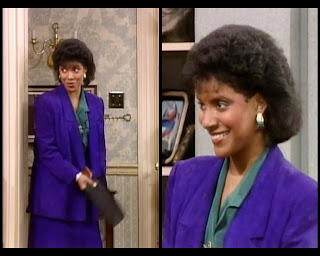 I need for her to change that hairdo.

You'd think this would be a repeat for Clair, but I'm pretty sure it's not: it's just another in her parade of violet ensembles. This one breaks from the pack by virtue of its being suede, if I can trust my eyes on that close-up. She also gives us some variety by opting for a sort of dusty jade blouse underneath, which is a lovely complement to the suit and a really nice shade for her in general. Finishing off with some silver jewelry, we've got ourselves a perfectly acceptable showing from Mrs. Huxtable. Not exceptional, but also not exceptionally bad. 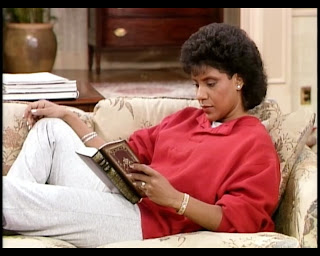 No, really. Fix the hair. Immediately.

She's the only person this week to get a full costume change, but she changes into this. Sweats. Not part of what I look at. 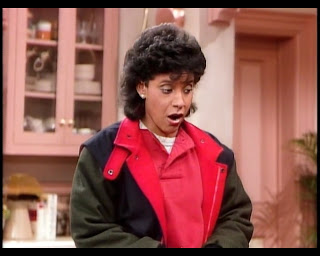 IT'S EATING HER HEAD!!! Oh, no, wait, it's still just the crap hairdo.

I did notice, though, that she borrowed Theo's episode #1.13 jacket, perhaps in the same way she "borrowed" Cliff's purple sweater last season. Keep an eye out; she might be a kleptomaniac. Lady, you're rich. You can buy new clothes. 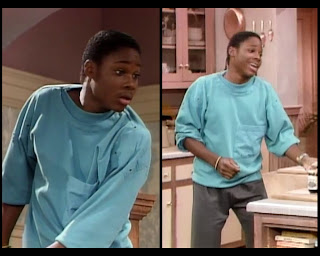 Where have you been lately, dude? We need to get your groove back.

Characters are starting to develop real leitmotifs in the second season. Cliff has his sweaters, Clair has her amethyst blouses, Denise has her red sacks, Vanessa has her double belts, and Theo apparently has cyan sweatshirts. This isn't the one with the shoulder buttons from last week, nor is it the one with the gross patterns from episode #1.10, nor the similar one (which may have been a t-shirt) from #1.14. This one differentiates itself by having a preposterous pocket. It's like storage space for a shirt that actually fits him. Downtown, he's giving sweatpants. All of this saddens me.

Vanessa and Rudy don't even appear this week, but that's just fine. We need to devote some serious attention to Denise. This episode is all about her in every way. 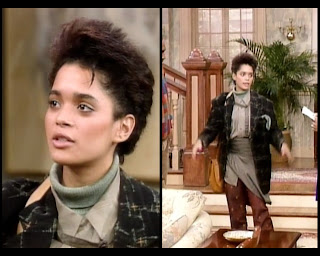 Uncapturable in a caption.

More is more, children! Look at the lushness of this layering. This is another Jenga outfit where everything is precariously balanced but somehow comes together into this amazing impossible obelisk. It's all working. That warm mint turtleneck gives a punch of brightness around the face before disappearing into the more muted tones of the shirt. And what a shirt! I'm pretty sure that it's all one garment from the offset collar all the way down to the baggy, faux-skirt tails. It's a hugely fashionable piece, mixing a sort of baroque menswear element with a more kimono-inspired feel. That brilliant wide belted section around her waist could be a cummerbund or an obi, or both. Moving downward, she's paired the sort of tea-stained upper garments with a rich sienna pant. Are those trousers actual silk? Is that what I'm seeing? It's all so overwhelming. Normally I'd hate on a blazer this big (and I'd be wary of a brown/black pairing), but here we're just sinning as boldly as we can, and it all delivers. Seriously, this outfit is my world.

Something like this could so be worn today. For a modern referent, consider Balenciaga's Fall 2011 ready-to-wear line, which played similarly with diverse layers and palettes to create an overall explosive impact. 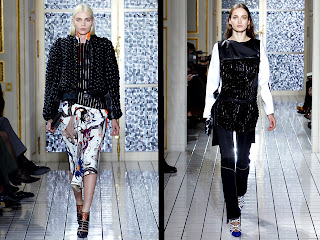 The colors are different, but the silhouette is remarkably consistent with Denise's selections.

But wait, we're not even done. 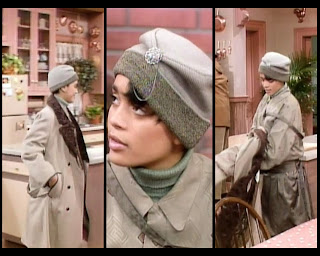 Oh yes you are seeing a turban. With a big ol' sparkly bangle right on the front because at this point, who even cares? She's hit some sort of sartorial Nirvana in which every move she makes is the right one. She's in a Zen state of oneness with all clothes everywhere. Look at the delicate print on her top, and the way it subtly incorporates mahogany squares reflecting the shade of her pants. The unique, odd yet not haphazard draping of the darker strap. The juxtaposition of the benign overcoat with the divine ensemble it covers. This is life-changing. How did this single look not change the course of fashion forever? We should all be dressing like this now.

OK, go rewatch the episode and take notes on Denise's clothes and then go buy something that will help you look more like her. That's what I'm doing today. (You think I'm joking?) Bye for now, darlings.
Posted by Unknown at 8:00 AM