Get ready, Hotness fans. This entry is going to be all about having a good time. Since the episode focuses on a Halloween party, there are almost no fashion choices made: it's all about costumes and outlandishness and putting on a show. As such, I have little to review: people aren't playing by the usual rules, so gauging how well they adhere to these rules becomes moot. On the other hand, there's a lot of creativity and flair on display, plus some interesting outliers to consider. Let's begin, though, with the actual clothes. 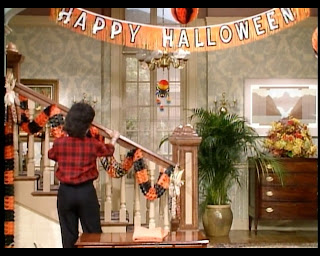 Clair starts the day in her episode #1.10 tartan, giving me even less to talk about, so let's just admire her decorating skills, shall we? 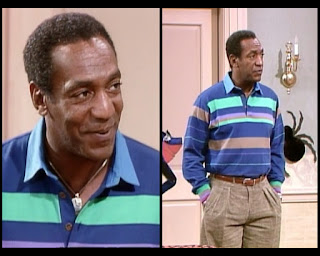 Typically, I work from the top down in my analyses, but I'm going to break that trend, because Cliff's heathered pants are a whole new ballgame for me. I honestly don't think I've ever seen that sort of muddled horizontal non-pattern on a pair of slacks before. I can see why not, too: at first glance, it's easy to assume that his khakis are quite wrinkled or dirty. Or maybe made of velour. Not to forever rail on about pleats, but I do think that the look would have a better chance on a flat-front trouser. The color variance is an attempt to make the pants more casual, you know? Let the unique splotchiness stand on its own. (That, and pleats are just horrible anyway.)

The shirt is a little Tron for me. That piercing aqua is too much. I like the concept of stripes of differing strengths and shades, but it's executed ineffectively in this case. The taupe band across the middle is especially perturbing. I'm digging the contrasting collar at least. One last thing: is that a dog tag around his neck? Or an American flag, maybe? Something patriotic is occurring near Cliff's sternum. 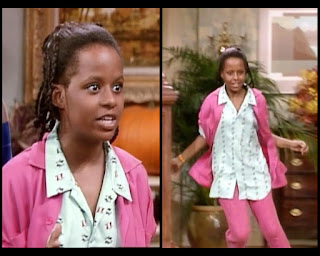 Her lopsided stance makes me wonder how many takes ended with her falling.﻿

Vanessa is the last person we see dressed in street clothes today, and she's giving us the full Dorothy Zbornak. Granted, Bea Arthur would only ever have sported this particular pink if she spilled Pepto-Bismol on herself, but the rest of this has a real Miami retiree thing happening. I don't have a ton to say about it except that I'm not a fan.

Alright, now we get into the costume portion of the evening, because no, Vanessa is not going out as one of the Golden Girls for Halloween. I'll offer observations on each (some more detailed than others), but mostly this is just for kicks. 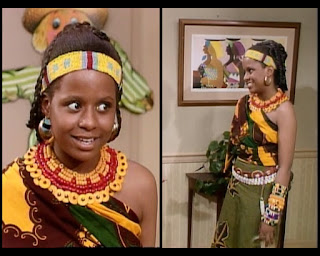 She should incorporate more of this into her everyday wear.﻿

Vanessa kicks things off with a surprisingly thorough recreation of traditional Masai garb. My guess is that the show's creators knew they would be skirting touchy territory by making another culture into a costume, so they went the extra mile to make it look like a serious, studied attempt. I can see Cliff and Clair being the kind of parents who would not only steer their daughter toward an Afrocentric costume, but also turn it into a research project about Kenyan traditions. Given the amount of care and effort that went into the finished product, I'm going to spin a story in my head in which Vanessa was deeply interested in the subject and came out the other end thoroughly informed about every pattern, bead, and braid she's wearing. 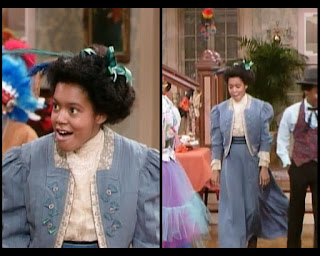 Pam Potillo returns as Janet Meiser, this time serving Victorian realness. Is this what Halloween parties for rich kids always look like? My costumes as a child came out of a plastic bag. 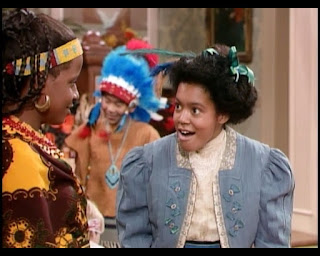 He better be singing disco hits with a construction worker, a cowboy, and a cop.﻿

Also, yes: that boy behind Janet is dressed as an "Indian chief." Oh, 1985. You were a different time. 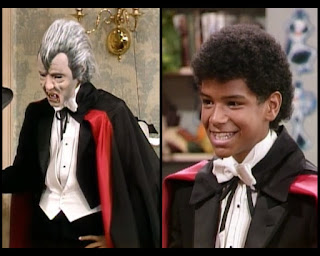 The object of Vanessa's affection during this episode is Robert Foreman. Dondre Whitfield reappears several more times as Robert during the show's run; his other credits include roles on All My Children and Another World, not to mention a recent gig as a regular on The Event. Also, he grew up to be fine, so Vanessa chose wisely. I'm assuming he's another of the Huxtables' bougie friends. I don't know a lot of middle schoolers who own actual tuxedos, let alone tuxedos they get to wear to parties where violently red punch will be served. 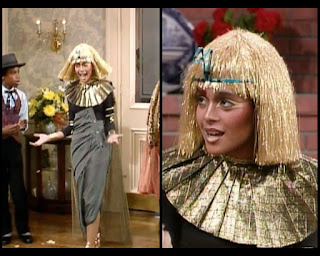 See? Denise knows how it's done. Her Cleopatra costume's success comes not from privilege, but ingenuity. It's all great, but the best part is that asymmetrical seam across her torso that inserts modern style into the outfit. It's nice that they brought back the idea that she has, and knows how to use, a sewing machine. Plus, if there's a fashion lesson in this episode, it's found here: knowing how to do make-up well can change your life. Check the glamor she's delivering in the face. So much blending and contouring! The eleganza, people! When your mug is this beat, you can make even a tinsel wig look good. 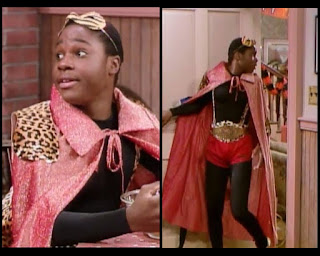 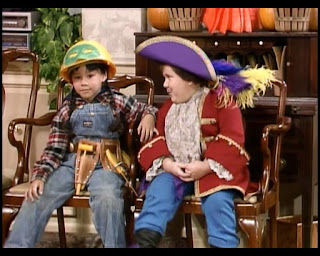 "I changed my name when I joined the International Brotherhood of Teamsters."

Peter and Audrey are back (though last time her name was Nancy for some reason). He's a pirate, she's a construction worker. I love that her costume flouts gender norms, and also love that she for some reason has a green mask on her helmet. It says, "I wear the overalls and tools every day, but the mask because it's Halloween." 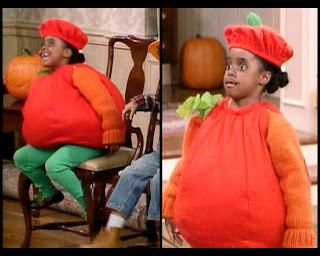 You will never raise a child this adorable.

Rudy is in a decidedly homemade pumpkin outfit. I like that it's both cute and practical: the built-in sweater arms and hat keep her protected from the cold weather, and the make-up doesn't go all the way to her eyes or mouth because of the risk of irritation. They could have done better with their fabric choice, though. Look at her in comparison to the actual pumpkin behind her. Way too red. 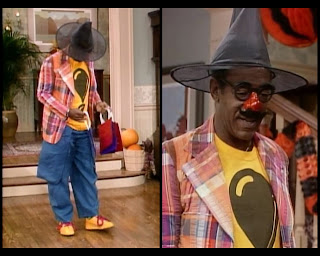 The exclamation point says it all.

Rudy dressed Cliff herself, though where she found any of these individual pieces is beyond me. 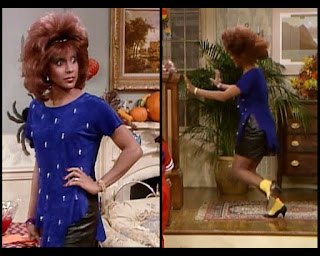 You better be good to her.

And finally, Clair, giving one of my favorite looks of the whole season. Though no one ever says what she's supposed to be, I think it's clear that she has made a Tina Turner costume out of things that were already in her closet. To me, this is the most accurate representation of Halloween attire in the entire episode. It's not polished, and it's not dead-on: it's a low-rent version that still gets the point across. I'm a little skeptical of the yellow socks, as I can't think of a time when I've ever seen Tina wear such a thing, but again, they nicely telegraph "I'm a rock star!" even if they're not necessarily authentic.

OK, dear readers. Happy Halloween, welcome to 2012, and here's to more holiday cheer of all types.
Posted by Unknown at 1:09 PM