For a school sociology project on large families, Denise and her friend Susanne are conducting interviews with the Huxtable clan. Theo complicates what would normally be a routine set of discussions when he falls for the woman asking the questions. 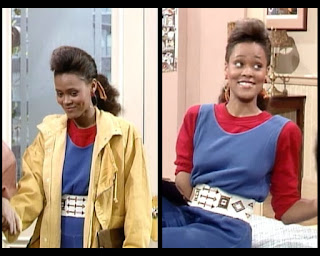 When Theo sees her, he hears Foreigner in his head.

It helps that the target of his affection is Robin Givens. She would look good wearing absolutely anything, a maxim that the wardrobe staff apparently took as a personal challenge. I keep looking for something good to cling to, but it's a calamity from every angle. None of these pieces look like they were meant to be worn by an adult female. Something about the teardrop earrings reads too old to me, though maybe I'm just concerned about the way their shape is mirrored in her outlandishly tall bouffant. The overcoat has a distinctly Gorton's fisherman air, while the blue romper would be more appropriate for a toddler. The undershirt would be OK in concept except that it has shoulder pads, which, I mean, what? Why? Must we put shoulder pads in literally everything? She's not helped by the flatness of her clothing, either. It's all single tones. Can we have a stripe or pattern somewhere? And does it have to be primary colors all the time? DKNY's spring ready-to-wear line plays with these same hues, and even a not-dissimilar silhouette, but because they use a print, their creation seems much more dynamic. Observe. 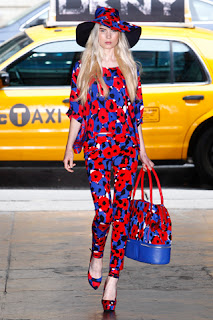 See? Instead, we have this. 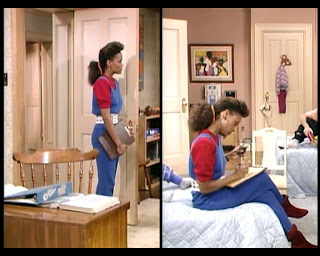 Belt placement is supremely important when you're wearing something this tight. One wrong move and your whole body looks like it was constructed from spare parts. By blocking her upper midsection with a white band that's thicker than her forearm, she unnaturally shortens her torso. And while we're talking about that belt: just because I asked for patterns, that doesn't mean you can throw any old random black markings on your clothes and call it a day. Thick belts (and white belts) have been popular multiple times since this show aired, so I understand the appeal, but they're not foolproof. I feel the same sentiment toward those crimson suede boots. In the right circumstances, they could be magical, but they can only be worn with pants this tight if you're in Robin Hood's band of merry men. 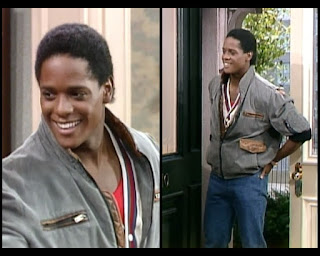 His character is on the wrestling team. There's a joke there, but I won't make it.

Theo is dismayed to find that his dream lady, who he's been pining after for over an hour, has a boyfriend. And not just any boyfriend: it's Blair Underwood, making a swoon-worthy return to the Huxtable household. Interestingly, he's playing a different person than before: his character in episode #1.16 was a friend of Denise's, but in this appearance he introduces himself as if he's never met her before. Most of what he's wearing remains covered during the short time he's onscreen, but there are indicators that it might be good. In general, a bomber jacket is a great piece to incorporate as a wardrobe staple. This particular one is a little busy, but I'm fond nonetheless. Beneath that, his cardigan has potential, though with only that one band of neckline showing, it's tough to call it with any confidence. On the subject of necklines, I will say that his t-shirt (maybe tank top?) appears to be a scoop neck rather than a v, and I think that's a mistake. He was also better off with last season's shorter haircut. 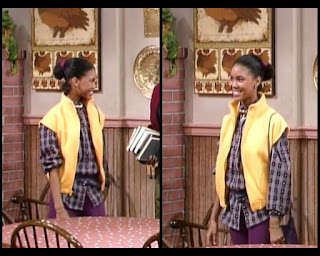 When Theo sees her, he hears Sade in his head.
And not just because her hair is pulled back so tightly.

Working to overcome his grief, Theo goes cruising at the library, where he picks up Tori. She's played by Victoria Gabrielle Platt, who you might recognize from her work as Vicky Spaulding on The Guiding Light. She fares better with sunshiny outerwear than her competition; if we pretend that the vest has a cap sleeve, ignoring obvious indicators that it's simply too big for her, then this is a cute piece. Pairing it with purples is also a better choice than red and blue. Her shirt, though also oversized, has a nice pattern. It's disappointing that she's wearing leggings, though. They're not pants, people. I thought this trend was new, but apparently it started long ago. Sure, jewel tones are nice, but that doesn't excuse indecency. When you're getting dressed in the morning, please get all the way dressed. Incompleteness is not an option. 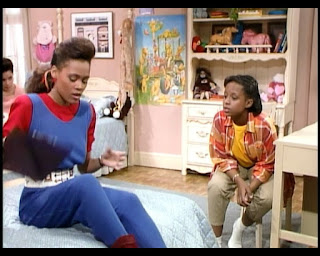 Did Susanne step in something? That would explain why everyone wears shoes inside.

That's all for guest stars. Vanessa will be the first Huxtable we examine because she wears the episode's only repeat, revisiting her shirt from episode #1.23. It looks better in calmer surroundings; a garment that loud shouldn't need to fight against other bold colors or weird belts to stand out. By supporting it with a goldenrod t-shirt and chinos, she presents a little more cleanly. Baby's growing up. 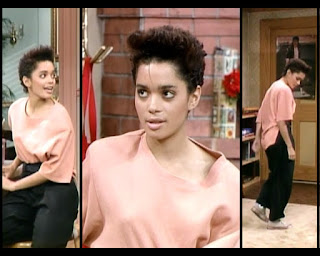 She's better than this.

Initially, this look reminded me of her episode #1.24 outfit, but it's not the same. In fact, it's mostly worse. I'm fond of the warmer pink on her, but otherwise it all seems too slovenly. The half-untucked shirt, the baggy pants with rolled cuffs, the stretched collar... there's a real hobo vibe, no? The only thing I entirely like about this is the hair. 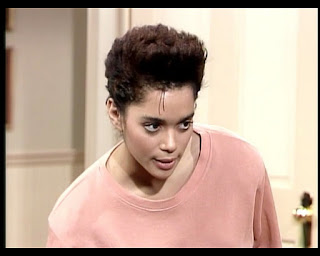 Life with her mother has taught her a killer glare.

Jumping on the Annie Lennox androgynous trend, she interprets the big hairstyles worn by women in her era through the lens of an Elvis-like pompadour. It's a bold move that could even have been a little severe, but she keeps it soft by leaving things a little messy and warming the color with some stylish auburn highlights. The finished product is divine. 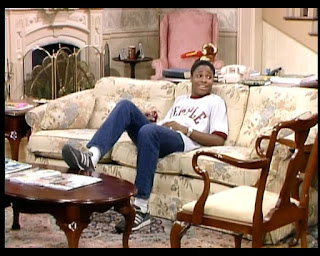 Look at all the fucks he gives.

Theo starts the episode in jeans and a t-shirt, which we're not going to talk about. Of course, he steps it up later. In fact, we're led to believe that he picks a new outfit and cleans his entire room over the course of about fifteen minutes. He's so smitten he gains superpowers. 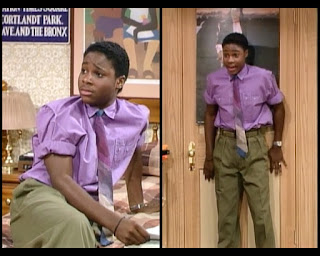 What's the opposite of rico suave?

He's on the right track with this palette. The olive and lavender are smashing, and they provide a lovely base for that stupendous gradient tie. But despite his efforts to look older and butcher, he ironically feminizes his shape through these ill-fitting garments. Look at the way the high waist and deep pleating of his trousers create a curvier hip, and the puffiness that emerges in his sleeve when the fabric bunches from being rolled too tightly. He's suddenly got Alexis Carrington shoulders, which I'm thinking wasn't his intention. Sorry, Theo. 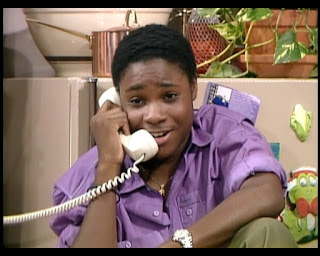 Trying to pick up girls? Then stop talking to your bros on the phone.

When he unbuttons his shirt, we learn that he has some sort of charm necklace on. Was it there beneath the tie the whole time? If so, does it serve a totemic purpose? If it isn't there for fashion, as it remains unseen, then perhaps it is a spirit animal that he calls on to heighten his virility. 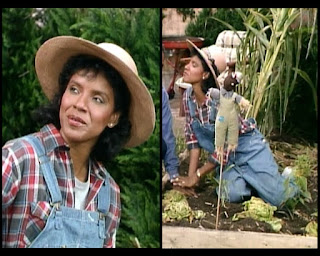 If you forgot how rich the Huxtables were, this episode reminds you by establishing that they have a backyard with a lawn, a garden, and a driveway. Sure, none of these areas is huge, but I've been in apartments without closets and these people have room to grow vegetables? I bring this up mostly because there's nothing to say about Clair's look here. She's not wearing it to be stylish, so I shouldn't critique it as though that's the case. I did notice that her plaid is remarkably similar to Theo's from last week, but that seems unimportant. (Unlike the rest of this blog.) 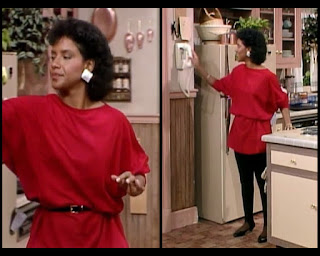 Those are last week's earrings, by the by.

First off, apologies for the unflattering screencap on the left. I tried for a better one, but it was the only frame that fully revealed the belt. This outfit is a classic illustration of how a baggy top can work against you. The way it drapes at the bottom, then again at the belt, then again at her breasts, makes her look like a Mister Softee ice cream cone. This impression is furthered by the tight, almost conical pants. And those are stirrup pants, people. Clair is doing the devil's work. She's even in sad little one-inch heels. At that point, why bother? And don't talk to me about how I'm a man and I don't know. I've stomped my way through parties in three-inch pumps. These are flats. 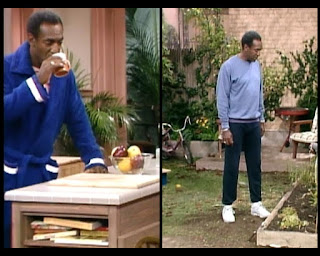 He doesn't care and you can't make him.

Unlike his wife, Cliff could not be bothered to put his grown-up clothes on, even with company over. He starts the day in his bathrobe and doesn't get dressier than sweats. Sorry, Dr. Huxtable, but nothing will be said about you this entry. 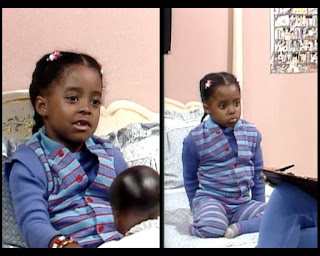 The Clair Glare once more.

I wasn't going to mention Rudy, but I felt bad continuing to ignore her. Plus, her face in that second image is hands-down serious. You don't want to step to that. Her outfit isn't bad, anyhow. I mean, for a striped onesie. She's five, there are no rules.

And there you have it, another delicious look back. Hope you all had wonderful holidays. Merry Hotness to all, and to all a good neep nop de zibben flibberty hoodad mujimjam burbisurb. Ya SEEEEeeeeEEEEE?
Posted by Unknown at 8:00 AM