Today's story is fairly straightforward. Cliff buys a juicer, Cliff forbids Rudy to play with the juicer, Rudy plays with the juicer. I wasn't hugely entertained, but Clair pulled me in during the third act with some superior parenting. I'll rewatch that clip one day when I have a misbehaving six-year-old of my own.

Of course, the clothes can't always be as good as the mothering. 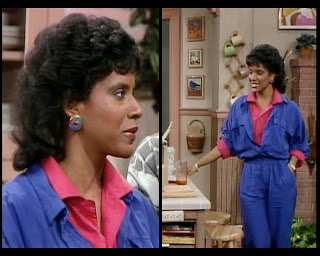 We never get close-ups this close. Look at the detail in her hairdon't.

It's easy to see why one would tear this outfit to shreds in a very literal sense, so I'm going to do my best to find the good before getting to the all-too-obvious bad. Not that there's a lot to recommend here. Before getting to the outfit, I'll point out the earrings, which are just fine. As for the clothes themselves, I guess the colors aren't terrible; I do enjoy the way she's rolled the sleeves together to give a nice contrasting cuff. I'm even prepared to admit that there's a way the coveralls thing could work. Like, if they weren't pleated, there's a sort of rumpled, I'm-a-sexy-mechanic aesthetic that might emerge from this. Maybe just throw on a t-shirt underneath it and call it a day? Belting it a little lower might also be a good idea. As would buying it a size smaller. Or, you know, not buying it at all, because at this point I'm trying pretty hard to salvage the unsalvageable. I'm also growing concerned about the way her hair is skirting mullet territory. Stop while you still can, lady. It's a dark path.

Some people don't mind her outfit one bit, though. 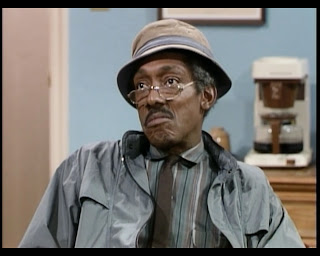 David Langston Smyrl is back again, playing a third character. If you took the glasses and jacket off him, you could put him in any bar in Williamsburg, and he would be on point. It's all there, folks: skinny tie, patterened shirt in dull colors, tiny collar, ironic old man hat (which is maybe not as ironic when you're his age, but whatever)... seriously, I'm sure I know three people with comparable items in their closets right now. These moments remind me why I began this blog.

Even though Sam Lucas the handyman is ostensibly distinct from Mr. Smyrl's other roles, he remains smitten with Clair Huxtable. When she walks in, he gives her one of these. 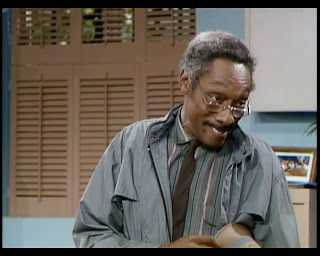 He fixes things all day, though, so his colleagues have probably numbed him to the sight of coveralls and mullets. 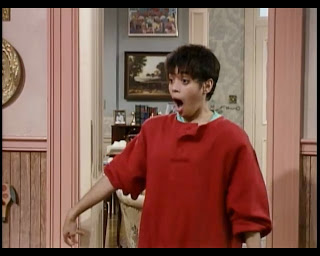 Denise appears only briefly , and only from the waist up, so this is what we have to work with. Yes to the weird buttony collar and the bright red, no to just about everything else. This is the worst of her many forays into plus-sized clothing for minus-sized people. Unless she's using the extra storage space to carry her siblings around or something, I can't comprehend the logic behind this horrible fabric bag. 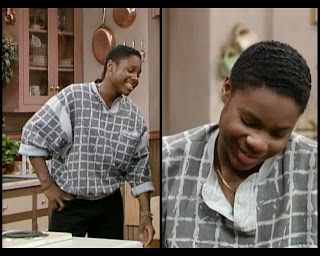 It must feel weird to wear a shirt that barely touches your skin.

Theo also gives us his biggest-ever bigness, and it's equally displeasing. The grid pattern practically begs us to measure the margin by which he has erred in sizing. If I saw him on the street, it would take a great deal of willpower not to say, "Dude, you need to lose, like, six squares around the torso and four from each sleeve." It's tough to question grays, squares, and other basics, but I do feel like the pocket is an obvious foul. What's going on in this house? That juicer has some bad juju. 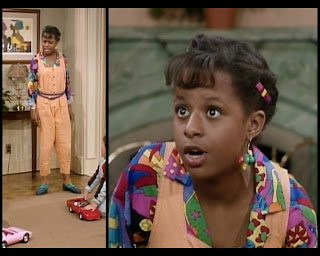 This will haunt my nightmares.

Wow, Vanessa. Feeling neglected? Other siblings getting too much attention? This is not the appropriate way to act out. There's enough going on here to fuel several ugly ensembles. That shirt alone is made of at least six patterns and palettes. Then we get to those peachy overalls, which have buttons leading obscenely down to your crotch, and wait what you belted them? You double belted your overalls with what I assume is the episode #1.23 belt because otherwise you own a fourth purple belt, and... oh sweet Jesus, the legs are too short, and then your socks are a different shade of orange and then green? Is that green? ARE THOSE JELLY SHOES?! I don't have the strength to go back up to the top to look at the earrings and barrettes. I might need to take a breather before I can even finish this entry. I'm using this as the benchmark: this is the worst outfit I have ever seen, certainly on this show, but perhaps also ever in my life. 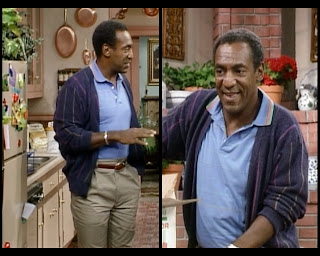 I didn't care for this polo in episode #1.9, but today Cliff has come dangerously close to making it work. It helps that he's hiding the banded end of his sleeve, which was my least favorite part of the garment. And by pairing the horizontal stripes in the shirt with vertical stripes in his cardigan, he sort of gives us a "more is more" situation that I endorse. Contrasting the pale blue with a rich purple also feels right to me. Still no to that rainbow collar, though. And you almost made it happen, too! (Pleated khaki pants aren't new or exciting, so let's just move past them quietly. Also, this is Cosby in a sweater, but not a Cosby sweater.)

The only person who gets two outfits in this episode is Rudy, so let's throw her a bone and review her clothes. 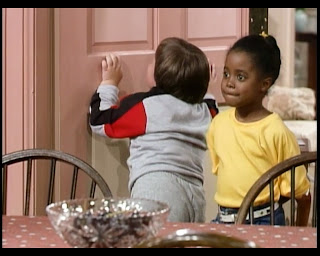 Peter is seriously the roundest little boy ever.

She keeps it simple to start off, rocking a plain yellow top with a denim skirt. The thing that catches me here is the white belt, which resurfaced a few years ago as a must-have accessory. It was everywhere for a hot second. Good catch, little lady. Of course, she splatters herself with fruit juice later. What happens when she has to dress herself? 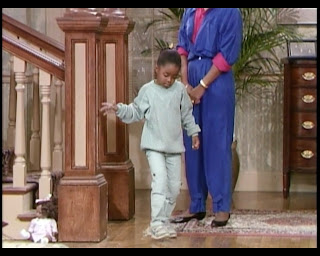 Don't be sad, Rudy. Your sneakers are as big as your head! That's fun!

Though she wore this in a previous episode, I didn't comment on it and thus don't have a link. This seems plausible as an outfit she'd have constructed on her own, though: I buy that a child would look for items that match rather than items that coordinated. The shape of that top is unreal. Especially with the patterning, it has a total Star Trek vibe. She could be a messenger from a futuristic society. What's really striking about this shot, though, is the body language. Her work as an actor in this episode is pretty great for a kid. You can totally see all the emotion in her stature: she's embarrassed and ashamed, afraid to tell her dad what she did... it's all there. You know what else is there? Straps. On Clair's ankles. She's buckled into her onesie. Things have gone from bad to so much worse.

And that, thankfully, is that. If Sondra had been around, I might not have lived to type this paragraph. As it is, I need a drink. See you next Monday, lovelies.
Posted by Unknown at 8:00 AM