As we enter the second season, I want to make a slight administrative change: entries will now go up every Monday morning. This gives me the whole weekend to write: I hate to provide you with a rushed product.

Let's also take a minute to talk about the show in general. From the get-go, the series was enormously popular. For its first season, it earned awards for best comedy series at the Emmys, the Golden Globes, and the People's Choice Awards. Mr. Cosby also took home a Golden Globe for acting. For the coming season, the good only gets better: the show rises from third place to first in terms of ratings and remains there for five straight years. Phylicia Rashad, the only Emmy-nominated performer last season, is joined this year by Lisa Bonet, Malcolm-Jamal Warner, and Keshia Knight Pulliam, who then becomes the youngest-ever nominee. Earle Hyman and Clarice Taylor are nominated as guest stars, as are two other celebrities who I won't mention: if you're watching along with me, I don't want to ruin the surprise. The other accolades are too numerous to name. Suffice it to say that the juggernaut is in motion, and America is all over the Huxtables.

For this week's entry, I'm not going to dive right into the show. Rather, we're going to start looking at one of its most memorable points: the opening credits. Each year brought a new intro segment, including a new recording of the theme song, and these clips are worth digging into more thoroughly because they really do set a tone. I didn't bother with such an investigation for the first credits sequence because it's horrible. No one knew what they were doing yet, so what they made was this whole montage of photos of the family playing baseball... I mean, look at this: 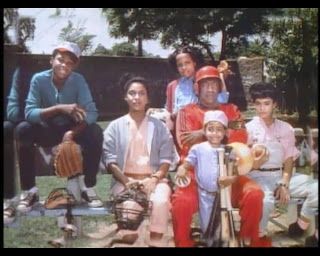 Who are these people? They' must be Bizarro Huxtables.

I refuse to acknowledge this. Jumping ahead a year, we get a bouncy segment during which each of the actors briefly dances with Mr. Cosby on a bare stage. I'll walk you through it in a nice, linear fashion. (I know, prolonging this project with additional non-episode entries seems unwise, but I'm trying to be reasonably thorough.) 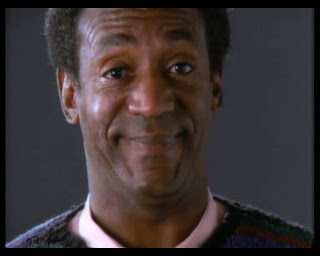 He's making this face because he has a surprise for us. 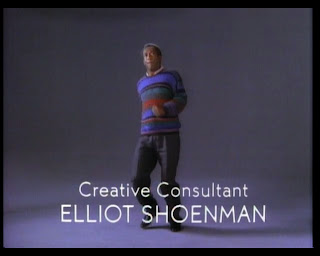 We have waited, huddled anxiously around our monitors, for this moment: the first Cosby sweater. This may not be the brightest or craziest, but it is clearly outside the norm: too many colors, stripes with no sense of order to their width or hue, a slight fraying that suggests the wool itself desires to take up more space and create greater ocular distraction... this is it. The unveiling of such a relic as the first image of the season suggests that the costume department has big plans in the realm of Doom Knitting, I hope. To get back to my "job" as "fashion" "critic," I'm not wild about the bit of pink collar poking out at the top. There are enough shades happening here already, it wouldn't have killed him to stick with a mauve. The black pleated pants are black pleated pants and unworthy of further commentary. 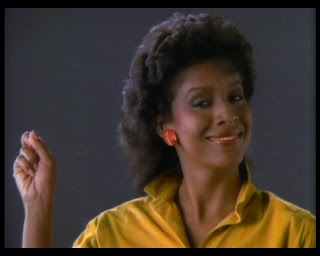 "Every time I make this gesture, I'm turning on a neon sign that says,
'I don't care what you're saying right now,' OK?"

Oh, you. I love you so much I'll even let you pop that collar. (No, that is not a euphemism. You quit it.) 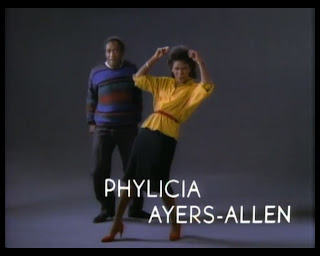 It takes a confident woman to wear this, but you know she can hang. First off, she stands out because everyone else is dressed in a palette that matches Mr. Cosby's sweater, while she serves as his counterpoint in a whole lot of yellow. Her blouse has just enough give, but then the cinch at the waist reminds you that she's young and lithe and fabulous. The black skirt is basic yet strong, but she's not holding back: she lets fly with some relentlessly red accessories. Pairing primary colors is often a no-no, but here it's a yes-yes. She doesn't have a lot of patterning and texturing going on, so if she wants to test the limits, it has to be through a chromatic risk. Well played, Ms. Ayers-Allen. Is it any wonder she doesn't stay unmarried much longer? 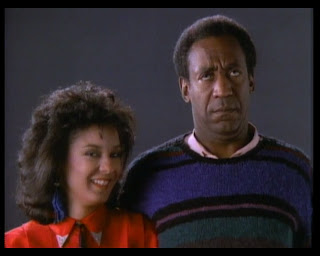 I know. My thoughts exactly. 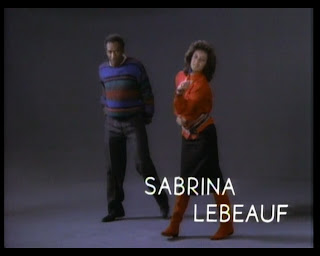 Did I miss the reveal that Sondra paid her way through Princeton by touring middle schools with a one-woman show about Annie Oakley? Or, like, a one-woman show about Reba McIntyre playing Annie Oakley? What's the opposite of southwestern realness? Because this is that. Working from the top down: the haircut is a nightmare, the blue earrings don't match, she looks terrible in red, the collar points are costumey, bolo ties are an assault on my delicate nature, the belt is strange, that skirt is the wrong length, her boots aren't even cowboy boots meaning that she hasn't even fully committed to this disaster... I just don't understand why this is happening to me. I'm a good person. I shouldn't have to go through this. 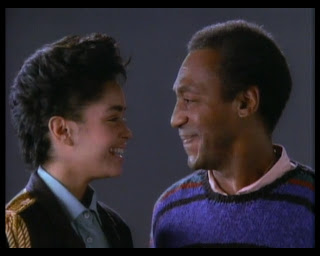 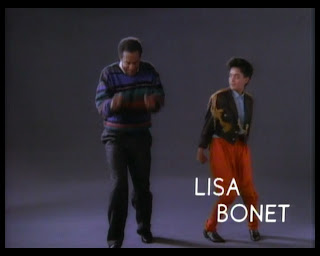 She looks like the second-best Prince impersonator in Des Moines.

In the same way that Cosby sweaters are defined by discord, Lisa Bonet's outfits are sometimes wonderful illustrations of why you have to coordinate your clothes carefully. This is a textbook example of individual pieces that are made uglier because once joined together, they essentially declare war on each other. The Michael Jackson blazer needs a way more subdued set of garments beneath it to work: it's obviously meant to be the show-stopper of the ensemble and shouldn't be offset by so much brightness and odd tailoring. If fabric could feel uncomfortable about itself, then that preppy pale blue shirt would be sweating right now. It knows it's at the wrong party. It's all, "Where are the khaki pants and gray cardigan? They said they'd be here," and meanwhile red harem pants are doing a line of coke off the table right there and it's mad awkward. No, but seriously, red harem pants are great, they're just so not great in this context. Look at how huge they are around back. 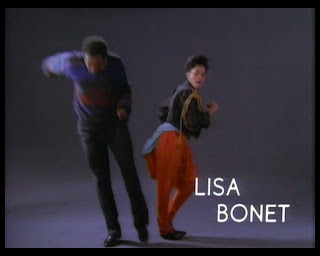 Plus the hangy-ness of the shirt? Worlds apart. Never wear these at the same time. I support the men's dress shoes, though. They could go with either of the two items on top, so I guess there's some matching going on after all. Despite that small victory, I still have to call this a fail overall. 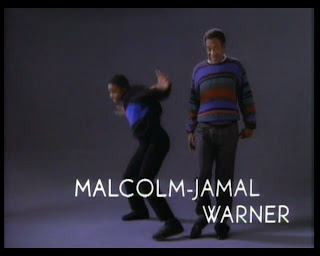 That's right, Lisa Bonet gets three screencaps and you only get one.

In a shocking move, the costume department repeats a s1-e3 look here. The black jeans are probably new, but this is not a fresh outfit. 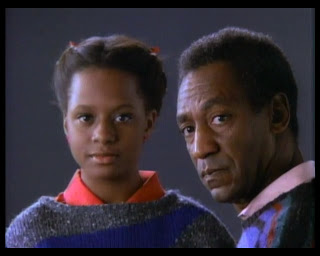 They see you reading blogs for hours on end. And they judge you.

You can tell she's growing up because she's all serious. 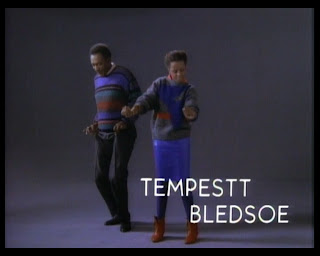 Groove is in the heart.

This blue shape sweater used to be Denise's in s1-e4, but the hand-me-downs continue. I think it's worn better here, actually: that pleathery cerulean skirt almost justifies the odd non-pattern in the knit. She also matches the small central stripe to her shirt, which is nice, and the tightness of her other garments makes the loose sweater seem less slovenly. The ankle boots are wonderful, but that brick hue clashes horribly with the orange-adjacent collar. 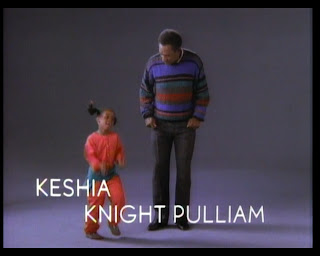 Oh, Keshia, you're dancing so hard that it was a nightmare trying to screencap you in focus, and you're so little and cute that I couldn't possibly care what you're wearing. Just keep being cute. Also, congrats on getting nominated for that Emmy at six years old. I'm more than five times that, and still just riding on your tiny coattails.

Well, that's that. Next Monday we'll dive in with the real episodes. Stay tuned.
Posted by Unknown at 8:00 AM