This show has so many episodes, I can't even believe it. Sorry, lovelies, but I'm in recovery after a debilitating migraine, so my dial might be set a little further toward "bitchy" than usual. I'll try to keep the tone bouncy and lively, but secretly I'm wishing that half of the Huxtable children had perished in the previous episode just so I wouldn't have to review them today. (I won't say which half.)

Anyhow, this week a colleague comes over for dinner so that Cliff and Clair can meet his new lady friend. Before this meeting, arguments ensue in the Huxtable household over whether Cliff would, should, or could remarry following Clair's demise. When Dr. Newcomb shows up, his woman companion turns out to be close to Sondra's age. This is simultaneously distressing and hilarious to his hosts. The episode is thin on plot, but hopefully huge on fashion! Follow me, my children. 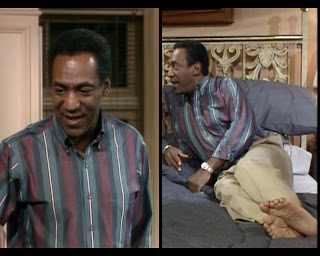 I bet that bed is so damn comfortable.

This is what Cliff serves up first, and it's not awful. The khakis are standard for him; I don't want to say the p word, so let's just say there's some front-bunch. In terms of the shirt, I'm not mad at it. The color scheme is nice; the amethyst and aqua offset each other much better than one might anticipate. I'm not hugely in favor of chunky vertical stripes overall, so I might have gone with a different way of juxtaposing those hues if I had designed this textile, but I didn't design this textile because I was a toddler when this shirt was made, so there you have it. 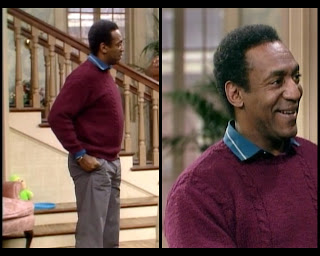 I feel less bad using the small print to point out how bulbous he looks.

After napping and changing, he delivers this little number, which I'm equally ambivalent about. The maroon is nice, and I like that the sweater has a cable knit to it to add a little variance. Those taupe trousers are my favorite pair; they're less common than the tan and black ones everyone else carts out all the time. The collar leaves me with questions about the rest of that shirt. It seems to be a sort of strange hue; something about its closeness to the deep red gives it the illusion of a greener cast than it probably has on its own. It also seems like the striping is strangely infrequent: I feel like there shouldn't be so much distance between them that we can only fit one on the collar. It must look way sparse, no?

You're probably wondering why Cliff was in bed in that earlier image. Well, that's because he got home at 3:07 in the morning, and he was greeting his wife. 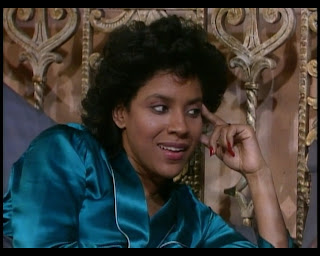 Waking people before 9:00am usually gets you whatever the opposite of this is.

3:07 in the morning. Hell, if I met a woman that looked this good when someone jolted her awake at an unwholesome hour, I'd marry her, too. Which is really saying something, seeing as I'm gay. Which you knew because I maintain a blog about the clothes on The Cosby Show. 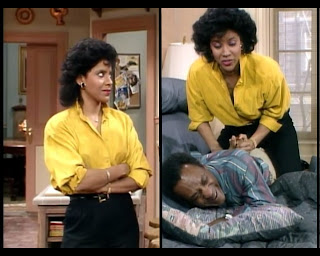 Seriously. Wonder Woman movie. This should have happened.

Everyone else wears only one outfit in this episode, because it would be impossible to spread this thin-ass story over more than one day. (Do we see the bitch creeping in?) Clair delivers this, which alerts me to the fact that even though she's broken cleanly out of the blue-purple family, she's still exploring too narrow a range of possibilities. Her go-to option is a solid blouse with black pants. Even when she has abandoned her beloved eggplants and aubergines for this glorious saffron, it still sort of looks like she's wearing a uniform. Granted, there's a realness there: you're a working mother of five, of course you're going to go to the mall, find a shirt that fits, and buy one in every color. Her monetary budget may not be restricted, but her time budget is wearing pretty damn thin. Especially when her husband is shaking her from her scant hours of slumber at 3:07am to talk about his widower friend. I'd try to smother him, too. 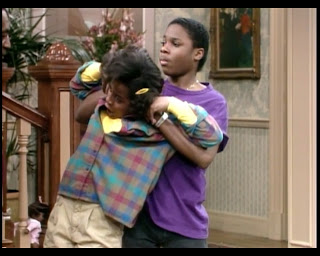 There's kind of a domestic violence undercurrent to this episode, huh?

Vanessa and Theo appear only briefly, and only together, so we'll just get them out of the way. Vanessa's shirt made an earlier appearance in episode 9, but worn quite differently. I'm liking it a little better with the brighter contrast from the yellow garment underneath. Points docked for p-word pants, however. Theo is wearing dark jeans and a purple t-shirt. Snooze. Don't make me rethink that death list, young man. (I've gone from bitchy to murderous. Not good. Stick with me, children. I'll eat some chocolate before I type the next paragraph.) 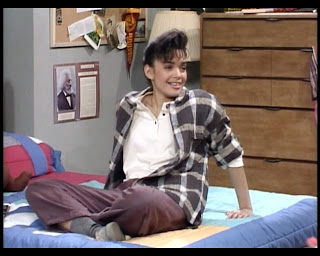 Is that an age-appropriate bedspread? Seems a bit toddler-y.

Denise is hella proud of these bangs; she's got height, body, and some near-icicle definition across the forehead. I can only imagine the hours of effort that could have been better applied in basically any other manner at all. The rest of the outfit has a sort of sloppy cuteness to it. The shirt is so dramatically giant that it says "I'm doing something fashion-y" and not "I don't know what my size is." The ruddiness of the pants is subtle, and the pattern up top is basic; she's really letting the volume be the star of the show here. I will neglect to mention that she is wearing shoes in bed (in her bed, it's so unspeakable I can't even) and just say that I kind of like this outfit. 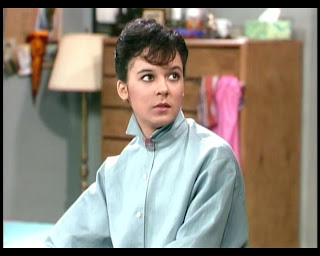 Have you ever gone to one of those "living history" re-enactment attractions like Colonial Williamsburg or whatever and listened to those weird people whose job it is to talk in the first person about how pies were made in the 1880s? At the end of the day, those actors go back to their lockers, put on their street clothes, and ask each other, "Was there one girl in a periwinkle blouse who talked to you for an uncomfortably long time?" Yes, yes there was. Seriously, Sondra, this is a step above Renaissance Festival. I will say that the screencap makes her look positively radiant in the facial region (and you know it burns me to type those words because I always dislike her and I ate my bitchberries this morning), but everything below the neck is a tragedy. Her skirt is so bad that I couldn't find a single frame featuring the whole thing at once. It's shown in snippets and flashes, as if the network found it too obscene to be broadcast in full. 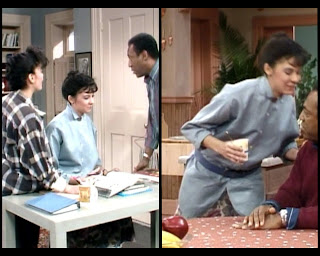 I know it's asking a lot, but look closely at those images and try to extrapolate the upholstery-grade awfulness that must be wrapped around her legs. Also, that blouse reaches her knees. And she's wearing a gross belt. It's like she was planted in the past like a Terminator to kill me through time with her offensive outfits. How many more seasons will I withstand this onslaught? Pray for me, children. 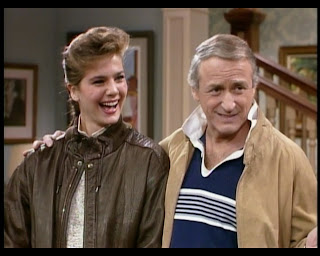 Fun fact about my date: she's the host for a symbiotic parasite!

These two don't stick around for long and are never more than a few inches apart, so I gave up any attempts at discussing them as individuals. Robert King, playing Dr. Mike Newcomb, has held occasional small roles in his career. His resume is a sprinkling of accomplishments like "Jennifer's Dad in Perfect Strangers" or "Cyrus in Lust for Frankenstein (direct to video)." His much-younger girlfriend, Nicki Phillips, is played by someone that the nerds out there will probably recognize: Terry Farrell. That's right, Jadzia Dax from Star Trek: Deep Space Nine made an early appearance right here on The Cosby Show. 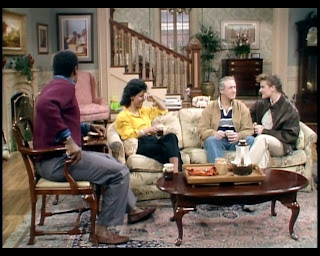 Look at the eye lines here. What are people looking at? Chaos reigns.

Their costuming is interesting to me, because they dressed her in a lot of neutrals, and then buried her in that big leather jacket. I'm guessing the intent was to make her look prim but still youthful, but really she practically disappears into the living room couch. That might also have been the goal. By contrast, her partner is much more vibrant looking with his rich blues and stripes. By today's standards, the popped collar would be a clear indicator that he was trying to come across a little younger, but I'm not sure if that was the implication when this was filmed. Regardless, neither of them is all that interesting from a clothing perspective. They also don't seem interested in staying very long, since they leave their coats on and barely even look at the coffee being served. So rude.

That's about enough of that. I should go meditate or drink some herbal tea or something. Why I gotta hate? Come back next week for an episode I'm sure you all remember.
Posted by Unknown at 12:03 AM