Whew! The last episode was so jam-packed with 80s style that writing it felt like a demanding workout. Ironically, this week's show is about a demanding workout, and as a result I will have to put in far less effort because a good half of the clothing shown is workout gear. Cliff's college track coach approaches him to run a relay race for men in his age bracket. Though not in prime condition, he accepts because doing so will afford him the chance to compete against his rival from the old days, Sanford "Tailwind" Turner. The rest of the family invests themselves entirely in the race with the exception of Vanessa, who gets asked to a boy's birthday party and worries over what to wear and how to dance.

We've all completely given up!

Let's just get it out of our systems: sweatsuits. This isn't even all of them. Not by a long shot. I'm skipping entire guest stars because they exist only in the realm of exercise gear. Sorry if you're for some reason super eager to read my opinions on track pants. I just think the less said about it, the better. Let's check some real clothes. 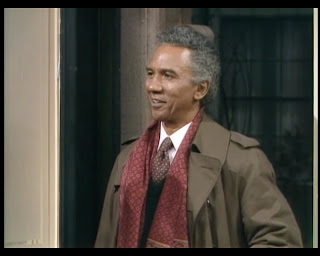 He is a harbinger of track suits, and thus my mortal enemy.

To kick things off, I'll examine the one new face deemed worthy of non-gym attire, Coach Ernie Scott. He is played by Al Freeman Jr., who won an Emmy for his work as Captain Ed Hall in One Life to Live and has since gained some fame for his portrayal of Elijah Muhammad in Malcolm X. He makes a good first impression with this look. Classic pieces like this overcoat will always serve you well, especially if you know how to break the mold in other areas. For instance, a quiet trench looks even better with a slightly louder scarf. I'll admit that the red and gold of the scarf are actively fighting with his similarly patterned tie, but otherwise he looks great. It's even better once the outerwear comes off. 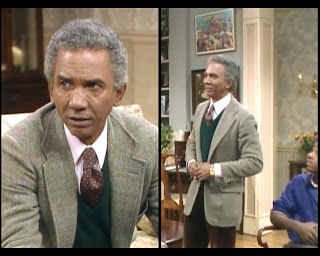 Is it just the angle, or is he mad short?

When he first came in, I thought he was rocking a plain black sweater. I guess the lighting by the door just sucks, because it is in fact the perfect shade of green. Between the crisp white shirt and the rusty tie and the gray blazer and the rich brown corduroys (overlooking the pleats as we always must), he's really firing on all cylinders. Guest actors get precious little time to imprint themselves on the audience, so they have to be handled carefully. A lot of information needs to be conveyed through one outfit; there has to be a cover by which we can accurately judge the book. The coach strikes a good balance between rigidity and warmth, and that shows in his highly formal yet comfortable outfit. 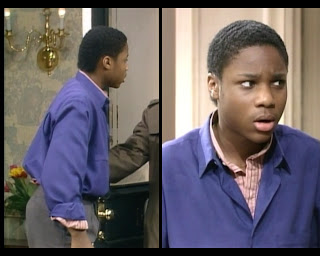 This is a great example of when Theo's forays into layering fall flat. It's just not always appropriate to wear one collared shirt over another. In terms of palette, he's doing fine: there's an awful lot of that grape-y color, but it matches nicely with the candy-like pink and white stripes beneath it. The styling gets an A for effort, at least: if the proportions were better, I'd be commending him for the way his sleeves roll together to flash a little color at the cuff. Unfortunately, the bottom shirt is clearly too large, meaning that the one over it needs to be almost comically sized to compensate. The result is completely tenty. This, like pleats, is something I'm just going to have to get used to. This is how clothes were expected to fit back then. Maybe our current obesity epidemic stems from our comfort with seeing people in puffy, droopy, overlarge clothes. Like, Malcolm-Jamal Warner may as well be fat if he's going to be parading around in XXXLs anyway. 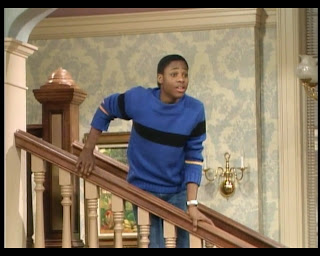 Don't even come all the way down. Go back up and change. Now.

Also, he may as well not show up at all if he's only going to deliver one line and wear this episode 5 sweater for which I have already voiced disdain. Come on, kid. Step it up. 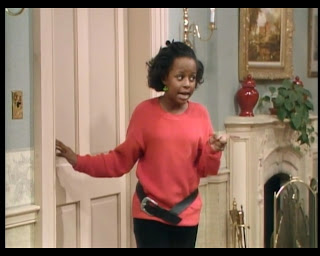 Finally coming into her own. I'll never doubt you again.

Vanessa's apparently on a mission to win me over, and the effort is paying off. I'm loving the whole vibe of this ensemble. The top is just baggy enough, the belt is sassy, the coverage and fit are age-appropriate, the deep coral is wonderful, and the earrings are fish again. In fact, I'm pretty sure they're different fish than last time; she actually listened when I asked her to do that more. No wonder she's getting noticed by the boys all of a sudden. She's clearly out to impress us. 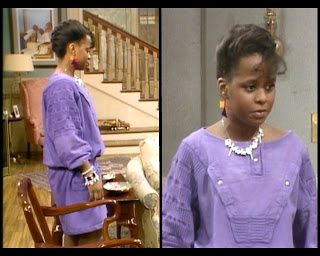 It appears I spoke too soon.

Unfortunately, when she's trying to impress a boy, she goes a little bonkers. Denise might not be a good influence on her. Maybe she needs to see a little more of Sondra's hyper-prep to balance things out. I mean, what are we going for here? Other than the color and maybe one or two accessories, this is pretty awful. I'm most concerned with the texturing across the sleeves and chest. It looks overwrought and tacky, not to mention oddly provocative. Like, if that panel at her neck is meant to be unbuttoned and opened, then what does it say when the same stitching detail is repeated once over each of her developing breasts? Not OK. There's something compelling about earrings so ugly they just don't care, and I'd be ready to love them except that they're too colorful to play nicely with a necklace and bracelets that are primarily white. She spends this scene asking her father for advice on how to slow dance with a boy, but I'm surmising from this rather preposterous dress that it's maybe not something she has to worry about. 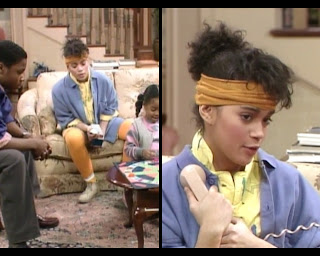 Oh, Denise. You are forever merging rightness and wrongness in new and confusing ways. Some of this I can get behind. As a general concept, I've become indoctrinated into the leggings/oxford/sweater getup that's made a resurgence with the so many other 80s looks recently. Her tonal choices here are pretty interesting, too; the buttery yellow and ochery orange would be about as compatible as oil and water if it weren't for that calming periwinkle, which goes a long way toward tying this whole mess together. Still, something about that headband screams "loungewear" to me, which makes everything else seem like pajamas. I know I complimented her use of color, but I think that these summery hues, while well selected, might be better off decorating the furnishings of a quaint bed-and-breakfast than adorning a teenage girl. It should also be pointed out that the splashy, splotchy pattern on her shirt is foul. That effect really did not stand the test of time. 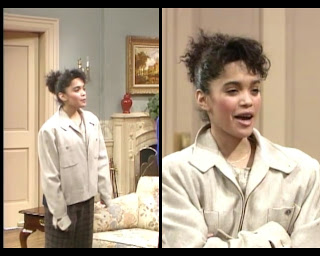 Her blush is blushing.

These pants appeared fairly recently, when she comforted Theo in episode 17. Today, she's wearing them to cheer on her father. Clearly, she believes in the healing power of plaid. We never really catch a glimpse of the top she's hiding under that jacket, and I've learned by now never to think I could predict Denise's next move, so there will be no speculation here. Let's just focus on the jacket. The fact that it's too big for her is, I'm sure, shocking to no one. What surprises me is its relative plainness. Sure, she got a little out of the ordinary with that collar, but it's mostly a rather standard coat. This is another time when I wish I could see this garment in person to make a clear assessment. I'm 90 percent sure it's off-white, but there's a part of me that things it could be truly ivory. My guess is that it's eggshell or cream or one of those almost-colorless colors simply because white photographs poorly. Regardless of the logic behind the decision, the beigening of a wild child is a sad thing to witness. Give this woman a colored jacket. 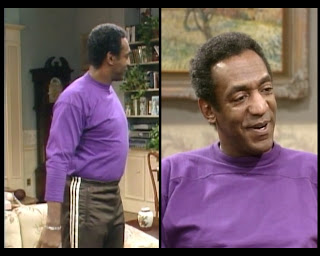 I'm counting this as real clothing only because otherwise Cliff wouldn't be reviewed at all in this entry, and that seems wrong. We'll bypass the track pants and simply say that he looks lovely in this purple. 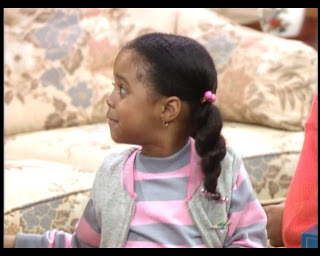 You need to watch this episode for her "excuse me" moment. It's the best.

Speaking of family members who never get their due and the faint praise thrown their way, can we stop and discuss how much I love gray and pink together? This color combination is perfect for those days when you feel like looking prim yet fun. By going for stripes and being five years old, Rudy manages to avoid the business-ier aspects of these hues. But picture a gray pencil skirt with a pink ruffly blouse. It's way feminine and flirty, but it seems austere as well. Or a man in a pink Oxford shirt with slim, pale gray slacks. Well appointed, yet approachable. Think about this for the future. Learn from the youngest Huxtable, or whoever dressed her.

She is snapping and saying "fierce" here, oddly not in reference to herself.

You knew I was saving Clair for last. This first outfit is mostly pretty standard for her. We've seen her in black pants with a blouse of this cut many times before. Everything is fitted well for her shape, while still retaining some give and flow. The collar, the jewelry, the shimmer of the fabric, they're all standard issue at this point. The belt might be a little different. The real stunner here is that she's presenting full-on aqua, which I don't believe she's ever worn on the show before. It's a daring color, especially in a shiny material, and I love it on her. See? There's no need to make everything purple. We have options, Mrs. Huxtable. 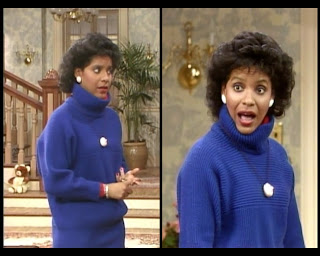 This gasp of dismay is also not self-referential.

This, however, should not be an option. Initially, I wanted to fall in love with this sweater. The idea of a luxuriously gigantic turtleneck was so appealing to me. But I was envisioning some glamorous angora like what Julie Christie wore in Dr. Zhivago, and instead she's giving me this cable-patterned mess. Beyond the texturing, which cheapens this garment significantly, I'm concerned with the tapered sleeve, which totally undercuts the effect of a voluminous piece like this. Plus, when we look at the cuffs and collar, we can see that she has something red on underneath or, heaven forefend, built into the garment itself. Regardless, beyond the delight of the cobalt, I can't really condone this tease of a look. You were better off staying at the top of the stairs and letting me guess at this one, hon.

Is that everyone? I think that's everyone. We're closing in on the end of the first season. Can you believe it? It's been such a long, glorious journey already, and it's far, far from over.
Posted by Unknown at 3:43 PM