Season 1, Episode 15: Physician of the Year

Dr. Huxtable's prowess as an obstetrician has earned him a Physician of the Year award from his hospital. In addition to a plaque commemorating his accomplishment, he is given a banquet in his honor. This provides an opportunity for the family to get all dressed up. Almost everyone spends the first half of the episode in a bathrobe, but the eventual reveal of their ensembles is overall worth the wait. Apologies for the variable image quality: it was difficult to get good captures at times. I did my best, but even when each person was given a dedicated entrance down the stairs, it seemed like the camera was unwilling to linger on their clothes too long. Why will no one think of my needs?

Sweatshirts make him SO HAPPY!

Despite being the guest of honor, Cliff is the only person in the house who didn't feel the need to shower before the formal dinner. I'm not faulting him for that choice, merely making an observation. I guess the other option is that he showered before everyone else, then decided to put this on before donning his suit, but I'm not sure if that makes any sense whatsoever. Regardless, he wears this, and it's my job to talk about it. I'm a fan of these sandy-colored pants; they're brighter than your average khakis, giving an update to a classic look. Also, they're flat-front slacks, which I've mentioned before are infinitely preferable to those with pleats. Up above, I'm not sure about the sweatshirt. I know he's just bumming around at home, so he really shouldn't be held accountable; he knows he needs to change before going out in public. Nonetheless, it's a mystery why this specific shirt was ever purchased. Not that it's horrible. He looks nice in red, and I'm sure it's quite comfortable. But the stripes are misplaced; either they're too far apart or too thin... something needs to change to make this OK, because right now it's not happening for me. Like I said, though, he recognizes the need to improve. 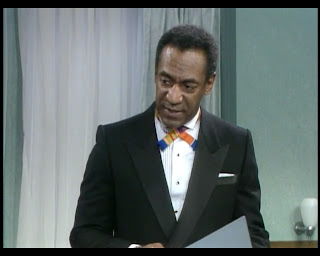 Yes, he's in the hospital. These are his dress scrubs.

A tuxedo is classic enough that it's difficult to critique. There are some key details to point out, but overall the main way he could go wrong was by not wearing one. Everything else is just nitpicking, but nitpick I shall. The biggest question for me is that tie. I've done a lot of Googling trying to figure out what that might be called. I can't imagine that such a neckpiece was literally invented for this show, but I also can't find written or visual reference for such an accessory anywhere else on the internet. It appears to be a thin strip of kente cloth, which is a patterned silk or cotton that originated in Ghana. Choosing to wear it not only adds brightness to his otherwise plain attire, but also celebrates his heritage to both the fictional audience at the banquet and the real audience watching at home. Since there's such an established history of how exactly a bow tie should be worn, I give him real credit for rocking a different style pulled from a different cultural history. However, given the lusciousness of those golds and blues around his neck, I wouldn't have minded a matching splash of something in his pocket square. At first I thought those were notecards for his speech in his breast pocket, but it's later revealed that Clair has those in her purse. The fact that I made that mistake means that something is amiss. An extra hint of yellow over there wouldn't have killed him. Lastly, it looks like there's a bit of a weird puff happening at the shoulder seam, like the jacket maybe wasn't sewn properly. Quality construction on a high-end garment like this is key. Those subtle flaws stand out. 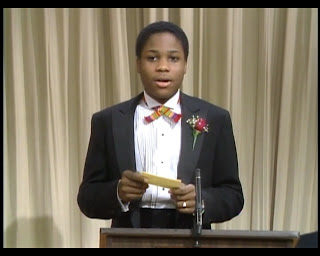 I think his eyes are actually going in different directions here.

Theo is wearing essentially the same tuxedo as his father, including a similar kente tie. Check his shoulder, though: none of that bunching we saw earlier. I'll also point out that both jackets went for the peaked lapel. I'm personally more partial to a shawl collar on formal coats, but I know that the peak is accepted as standard. Again, 90 percent of any black-tie event is, "Is he wearing a tuxedo?" He is. 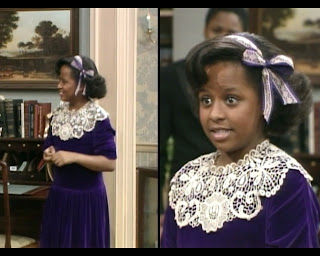 Everything about this look is way too old for Vanessa. I don't mean she seems womanly; I mean she seems elderly. The rich purple looks nice on her, but there's so much of it. With the dark color and the heavy fabric and the gathered skirt, it just seems so weighty. Imagine if she hadn't rolled up the sleeves! Then that doily around her neck just puts the last nail in the coffin. On the bright side, the hair ribbon with matching lace overlay is a nice touch that goes well with the dress while restoring a hint of youth. Overall, though, there are better ways to prepare a preteen for a formal outing. 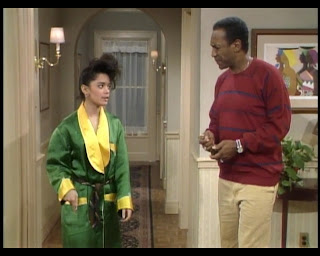 This might be the best Denise's hair has ever looked.

Despite saying that I wouldn't review pajamas or other nightwear, I have to call out Denise's choice here. Even when not wearing actual clothes, she feels the need to assert her individuality. Check the tie on her robe: it's an actual necktie. Bear in mind that her family members are probably the only people who will ever see her with this on: she's really got something to prove. Ah, teenage rebellion.

It's never explicitly stated, but I'm going to assume that Denise sewed this herself, mostly because I don't want to believe that there's a rack off of which it could be bought. To start off positive, let's talk about her application of lace. She wears it better than Vanessa by using it more youthfully: the skirt that hits above the ankle and the fingerless gloves insert a little deviance into the outfit, even if those choices also make it a hair less formal. The string of pearls wrapped around her wrist has a similar impact. However, there's way too much pale pink here. She needs to break up that monochrome with something accessory-wise, or else she looks like a dessert. The sweatery bodice is an interesting concept because it allows her to play with texture. The wool is a wonderful contrast to the lace, but you can tell that it's a tough material to tailor flatteringly. Between the sleevelessness and the chunkiness of this getup, her torso looks plain malformed. I'm fine with the earrings, but I might have gone for pearls in the neckwear rather than a gold chain. Maybe a choker? It's also worth noting that the front of her hair looks like a bird's wing. It's either trash or art; I can't even tell with her anymore. 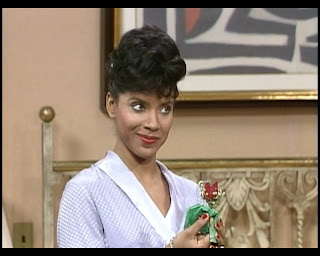 This shot comes directly after Clair mentions that she hasn't even begun to get herself ready. We are once again asked to believe that she is a) nearing 50 years of age and b) unprepared for an evening out. LIES. 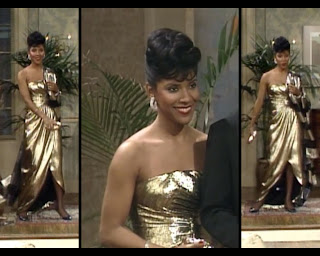 Can I just say thank goodness for Clair Huxtable? Seriously, look at what's happening here. I'm not sure whether I can muster the words to do it justice. This is unbelievable. A gold dress is the kind of thing you have to do just right or you look like a Vegas cocktail waitress. This woman knows just how to handle that fabric. The wrapping and draping add interest by letting the light and shadow insert depth to the garment's tone while positively exalting her figure. The arm band and black-and-silver shawl take her even higher, giving the slightest suggestion that she is perhaps a pharaoh or an Egyptian goddess. The nod to Africa helps her mesh with Cliff's look even when she's going in an entirely different direction from him. With such a stunner of a dress, she prudently scales back the rest of her choices: the make-up is minimal, and she opts for just-big-enough earrings with no necklace whatsoever. None is needed. The black hose, black shoes, and golden clutch all match without adding distractions. I'm in awe. How does she not wear this every single day? Where does one find that kind of willpower? 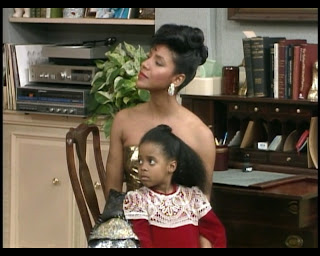 She decided to match Vanessa. Gross. I should have stopped at Clair. I shouldn't even be writing this blog right now, I should be writing a love letter to Phylicia Rashad.

With a finish like that, we can assume that next week's entry will be a letdown. Please don't stop reading. I promise that there will always be something to talk about where this family's clothing is concerned. In some ways, it's almost more fun when it's bad. Until then.
Posted by Unknown at 9:48 PM