The family has its first encounter with that cornerstone of 80s fashion, the single earring, when Theo goes to Cockroach's house for the weekend and gets a gold ring through his left lobe. His attempt to hide the new accessory from his family is of course futile (was he really planning to keep it a secret until his 18th birthday?!), but Cliff's efforts to ridicule his son also fall flat when his own parents come over. The discussion devolves into stories about the preposterous things the Huxtable men will do for a woman. We will continue that conversation by exploring the preposterous things they will wear for an audience.

Since there are repeats this episode, let's get those out of the way first. 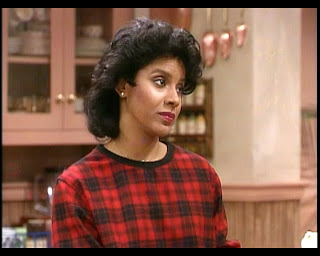 Clair has brought back this red situation from episode 10. I didn't bother capturing it, but she's wearing the same black pants, too. It's not a look I'm going to grow fond of any time soon, so I'm hoping it doesn't get recycled too often. She's capable of so much more! Letdown. 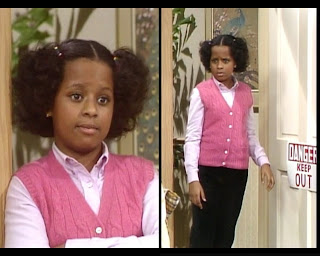 When we saw Vanessa rock this oxford and sweater vest in episode 8, she was a lot more creative with her other choices. While I miss those stellar plaid tights, I have to say that her top is better served by the neutral pants. This might not be a standout look, but at least all the pieces make sense together. 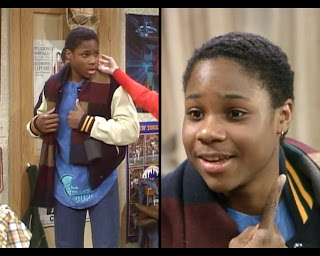 Let's all put our grubby fingers in that fresh wound!

We saw this shirt in episode 10, too. The scarf has been in the past two episodes. He's worn this coat before, I'm sure, but I don't think I ever specifically called it out. Anyway, this looks like a mad jumble to me. Theo usually seems much more coordinated. His weekend at Cockroach's must have been tough. Clair had the same problem when she came back from a night away in episode 11. The issue seems to be that the Huxtables dress well, but pack poorly.

Given that it's the subject of this episode, it would be questionable not to comment on the earring itself. The thing is, this particular piece of jewelry has a lot of symbolism and baggage both culturally and for me personally. Growing up during this era, I remember lots of talk about whether earrings were gay, and if straight men got their ears pierced. The consensus, at least among my older brother's friends, seemed to be that the side you chose for the piercing would also broadcast your sexual preference. The left side meant that you were straight; this was once reinforced to me with the helpful mnemonic device "left is right and right is wrong." You can imagine how reassuring this was to a closeted youth.

Anyhow, I'm not a fan of the single earring, but I understand that it was hugely popular at the time and also that it's tough for me to be objective about it. I will say that the lopsided look has fallen completely out of vogue, and if today's fashion standards are the ostensible (if inconsistently applied) litmus test being used in this blog, then Theo fails this round. 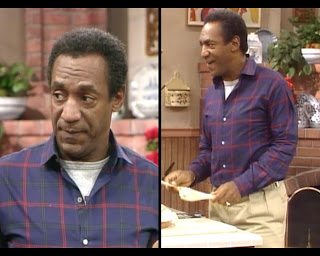 I'm shocked at the lack of facial contortions here. Was he sedated?

It's strange that Cliff, who is remembered for his sweaters, spends so much of the first season in plaid shirts. The concept of incoherent woolen monstrosities was obviously stumbled upon later in the show's run. Little about what he's doing is remarkable in light of previous outfits. The shirt is alright. I like the blue on him, and the red/green stripes are confident without seeming overdone. On a dramatic level, I enjoy the printed tee as his bottom layer, because it lets the viewer know that he wasn't thinking too hard about his clothes today. As a critic, however, I'm distressed: you should never not be thinking about your clothes! My God, man, how do you not own a plain gray t-shirt? I'm also of two minds about the pants. Look closely at his hip, and you'll spy metal fasteners for adjusting the waist, like those found on rented tuxedo pants. I'm intrigued by this concept: I've only encountered those clasps at formal dances and weddings. I know that some dress trousers have them, but in my head, they're firmly associated with garments that need to be versatile because they will be worn by several people, none of whom own them outright. They're not a stylistic choice, they're a practical consideration. If your waistline expands or contracts, that's your business, but maybe wear a belt to hide the evidence. 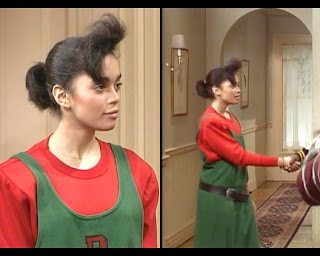 Denise is doing pretty much everything wrong. We'll start with the palette. I think I've said previously that basing an outfit in reds and greens screams Christmas to me. If you're not one of Santa's elves, you're not allowed to do this outside of late December. But even in different shades, this would be ugly. First, there's the confusingly tailored sweatshirt. The largeness around the shoulders makes sense (she's certainly done it before) until you check the sleeves, which get tight starting at the elbow. I'd almost rather the whole thing were huge: reminding us that the shirt could be form-fitting (as any top should be if you plan on layering with it) is just a tease. While we've got the close-up, let's also acknowledge that her bangs are mad tall. Their house must be really windy today. Anyhow, there's more to look at with this one. 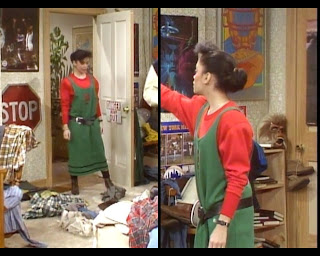 Can someone please explain that mask over on the right? Thanks.

Forever exploring the outer reaches of the fashion universe, Denise has decided to give us her take on sports. The "dress" she's wearing is actually a grotesquely oversized basketball tank top, complete with a number on the front and some black stripes on the bottom. I don't know what to say. The number of times she's given us Halloween-worthy ensembles leads me to wonder if it's all just an epic prank or some obscure trend I never heard of or... just what the hell is going on? Why? I need to know why. All I can say is that this is a bad outfit. The belt hardly matters because there's no accessory on Earth that could save it. Everyone's letting me down today. You know we're in trouble when Vanessa looks like a solid contender for "best dressed." 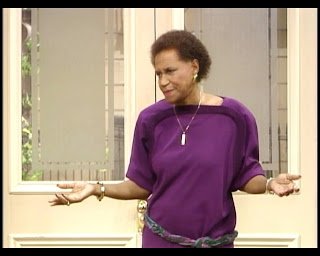 Class, I'd like you all to say hello to the new girl. Here we have Clarice Taylor in her first appearance as Cliff's mother, Anna. She comes off a little grumpy in her initial delivery, but the character quickly warms up. This dress, on the other hand, never improves. The amethyst is a nice hue for her, but nothing else is helping. The contrasting bar at the neckline is the only thing adding even a hint of shape, and she doesn't need it up there because her shoulders are broad and lovely. The sleeves and torso are just formless, though: between the cut and the material, she's essentially thrown into a purple sack created to exacerbate gravity's effects on her upper arms and bosom. It was hard to get a good screen cap, but below the waist, she's dressed a tad too young; her high black boots are more appropriate for Denise than Denise's grandmother. I'd say that the belt could be a little higher, but really I want it replaced entirely because it appears to have been made at home from old bath mats or something. What a clumpy, faded, damp-looking string of grossness! I wouldn't want to touch it, let alone wear it. I also want to trim her hair. She'd look great with a tighter, rounder style; that extra squared-off chunk in the back is especially distracting. Picture it all one length, and slightly shorter overall. She could pull it off. 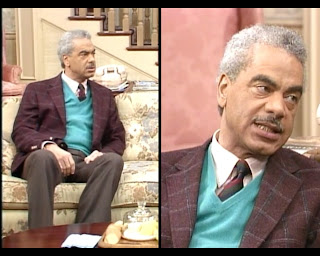 Being this casual while looking this good is Zen mastery.

Oh, Russell Huxtable. You prince. You lifesaver, you. My faith in televised fashion is restored. Just try to tell me that this isn't magnificent. I won't hear it. Back in episode 8, Cliff attempted to rock a similar sweater, but he blew it. His father makes it work perfectly. I can hardly choose what to compliment first! The whole look is constructed with such care. The soft taupe of the trouser is simple enough not to distract, but not as boring as a standard black or khaki. The brick-red patterned blazer is more assertive without becoming challenging. Look carefully at his shirt in the tight shot: that's not white, but pale pink with white stripes. Again, neutral without being bland. He's not going to settle for plainness. The tie is like the jacket: its richly shaded stripes still avoid veering into brashness, and it skillfully matches with the other garments in terms of hue. Then, just when all those members of the red family are getting comfortable, he turns that color wheel nearly 180 degrees and gives us full-frontal teal. It's so daring, but so right. Look at him. That's how it's done, kids.

Closing on a high note is always nice. I never know what to say to end an entry, so at least the fashion continues to sizzle even when the prose fizzles. (Yeah, you're right, a rhyme probably wasn't the way to go.) See you next time, all.
Posted by Unknown at 1:00 AM