I'm afraid I have some bad news for you all. First, as you may have gleaned from the title: Rudy's sick. Poor Rudy! Second, this is another episode in which few outfits are featured. Poor audience! I know, it's hard, but we'll get through it together. I'll try to make my commentary extra insightful and hilarious. Quality, not quantity, people.

As before, let's start off with the day players. The anticipation will make the arrival of actual Huxtables seem so much sweeter. 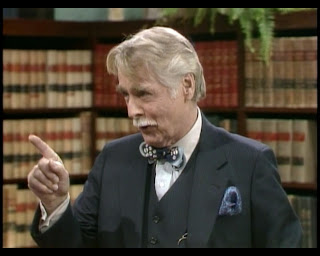 "Oh, you."
This is Clarke Gordon as Mr. Halifax, the founding partner at Clair's law firm. He had already been working in film and television for over 30 years at this point, with character roles here and there in everything from Gunsmoke to Lassie to Charlie's Angels. His character is dressed in the standard Rich Old White Man uniform, the pin-striped three-piece suit. There's not much to find fault with, really; it's a look that has stood the test of time for a reason. Other than the fact that his shirt cuff could be a tad crisper, he's impeccably sharp. I find it particularly hilarious that he has the shaggy hair and trimmed mustache of a modern-day twenty-something Brooklynite. Seriously, get off the L at Lorimer and do a quick 360 scan; I promise you'll spot this exact hair configuration. (That dude isn't dressed for the office, though; he's wearing skinny jeans cut off at the knee and a really baggy tank top. No, go look. He is.) Anyhow, boss man looks like a boss. You can't argue with the classics.

I will take a second to point out his bow tie, mostly because he calls it out himself. After informing Clair that it is a "quality" piece, he begins to extol the virtues of quality, going as far as to say that the tie will never go out of style. While I'll get behind the overall concept that fine materials and well-made garments remain staples in any era (e.g., the proverbial little black dress or aforementioned three-piece suit), I wouldn't go as far as to call this tie a timeless classic. The pattern is evocative of sequins, which don't really belong anywhere near this ensemble, and the colors clash with the pocket square. Sorry, guy. Not all silk bow ties are created equal. 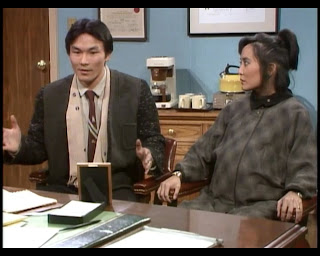 I love that Cliff faces the pictures on his desk toward the patients, not himself.
Meet the Yamados! Janet, played by Haru Aki, is wearing a particularly terrible maternity dress. I get that it's cold out, but just wear a sweater or something. This cut is edging into sister-wife territory. Steve, also known as Doug Yusuda, isn't doing much better. I'm not saying that it's wrong to vary fabrics and colors between the body and sleeves of a coat, but I will say that it's wrong in this case. Since the colors aren't that different, the darker, mottled arms just look filthy as a result, like they need to be rinsed, dried, and vacuumed repeatedly. The collar on his shirt is a little small, and the tie's a little thin. Truthfully, I think that combo would look fine today if the tie were solid instead of weirdly striped-ish; it's largely personal preference that makes me question it. I know people who would wear similar items. The scarf is objectively problematic, however: it's too close of a chromatic match to his shirt and the coffee beans on it are weird. I hope the baby's cute at least. 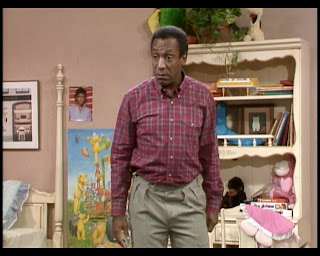 "See these pleats? No? Lemme squat into them for you."
I'm not positive, but I think this shirt is different than the one Cliff wore in episode 3. The blues in that one were much more vibrant. Maybe it lost its color in the wash. If it's not the exact garment, it's still the same basic concept; he seems about as comfortable in a brick-colored plaid as Clair does in a solid eggplant blouse. This is an unremarkable showing from Dr. Huxtable, but he's just bumming around the house, so I can't hold him to too high a standard. It's a generic, perfectly acceptable Dad outfit. Yawn and move on. 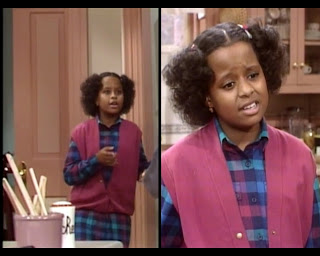 There's one in every family.
Vanessa already did this to us in episode 8, only last time she didn't button the sweater. When I went back to review my previous commentary, my first thought was, "Why did I not mention that she looks ridiculous with the collar closed? She's like an Amish child in technicolor!" Thankfully, she retroactively heard my unspoken judgment. I'm really not sure what they're aiming for with this hairdo, though. It keeps getting bushier on the sides and flatter on the top, and I just can't imagine why anyone would value overall cranial width as a beauty marker. "Look at how much lateral space my head occupies!" I'm at a loss. 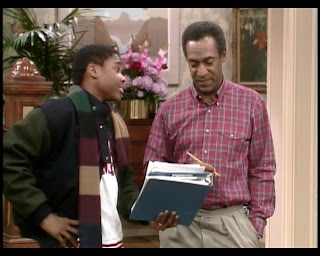 Remember when we used to talk about how stylish you are?
Theo wore this same jacket and scarf last time, and I opted not to mention them. Today, he's only wearing jeans and a sports jersey, so I've got nothing left to talk about except his outer layers. It's like an installment in the Final Destination series, except instead of death, I'm being chased by color blocking. The coat is actually a great example of how you can contrast the arms from the body in a fun, fashionable manner, so take notes, Mr. Yamado. The forest green goes well with the midnight blue; it's manly but still has a stylish flair to it. The scarf would be perfect if that emerald chunk by his neck weren't so close to (yet so far from) the shade of his sleeve. It's a shame that he's not trying harder with those foundational garments. Well-matched outerwear can partially mask your outfit's schlubbiness, but not entirely obscure it. XTREME FASHION THROWDOWN starring Lisa Bonet
This is a really interesting case, because Denise is dressed for a "slop rally" at school. Unfortunately, since the costume department has already thrown so many cartoonish looks her way (episode 7's Hogwarts uniform immediately jumps to mind), they had to go way overboard to prove that this is something she wouldn't otherwise wear. Even with the volume turned up this high, I was half-convinced that she was just wearing this because she's into looking weird. I will say that as an outfit specifically designed to look trashy, it's actually holding up well. For this many layers to look even mildly acceptable next to each other, someone must have been planning for hours. The paisley blouse is so wild that it should basically cause a nuclear reaction when exposed to that plaid dress, but the soothing neutral of the vest cuts the tension. Her khaki coat is plain enough to pair nicely with everything below it, and all the muted colors are brought to life by the vibrant scarf. The bulky legwarmers are a little ridiculous, but really everything about this ensemble is a little ridiculous, so it fits. Ditto on the hat: gray bowler-looking thing with a fuchsia fur flourish? Why not. And brooches everywhere because apparently she's been collecting two a day since birth. Somehow everything ends up fitting together like a complicated puzzle. Against all odds, this examination has made me want this to be an actual look. I a little bit love it. 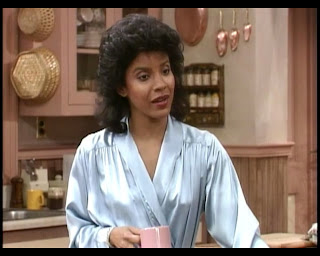 Perfection at any hour.
As we've established previously, things like bathrobes and nightgowns aren't going to be explored in this blog. On the other hand, I couldn't help but capture this moment because I can't believe that we are expected to buy this as an early morning face and hairdo. Does anyone drink an 8:00am cup of coffee like this? Look at the height she's getting from this coiffure. It's so majestically large. Seriously, imagine that below the waist is a gray pencil skirt. She's ready for work, right?

She's interviewing to play Grimace at the McDonald's down the block.
Today, however, is not just any work day. Today Clair is discussing the possibility of becoming a partner at the firm. She needs to dress to impress. Given the circumstances, I'm surprised she didn't wear more purple, but she did fall back on the reliable Huxtable standby of cerulean and black. There are some things I like about what she's doing. This is somewhere between a coat and a dress, and as you can see from the above shots, it's a versatile piece. She plays with a few different button configurations, which are placed from left to right in order of how much I support them. The clear winner for me is to close the top and leave the bottom flowing, giving a sort of caped effect. The garment is cut pretty widely, and allowing it to billow sort of masks that. If it gets closed all the way, as on the right, then it looks pretty frumpy. I'm surprised she went for what appears to be a black leather necklace over her turtleneck. For an interview of this caliber, I might have worn something with more universal appeal. In fact, overall, I question her instinct to go for non-standard, fashion-y pieces. He's wearing an old-school suit; she might have been better off in something more classic.

And there we have it: the end of the road. It came too soon, didn't it? Let's meet back here in a week and talk about outfits some more. I love these little chats of ours.
Posted by Unknown at 6:50 PM