This week's episode is all about gifts. Cliff first mentioned the inappropriate purchases made for him by his children in episode 8, when Denise dressed him with clothes she had bought for him over the years. In today's story, he takes matters into his own hands, warning his offspring to supply him with thoughtful gifts for Father's Day even though it is not yet Christmas. This might sound like overkill to you, but consider some of the previous wounds inflicted upon him by his family. 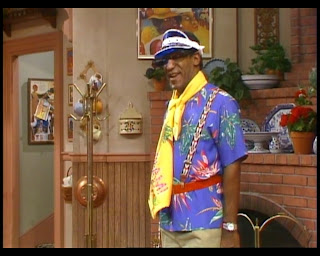 Why would his children buy him a tie that says MIAMI?
An outfit like that should only be viewed in the dark. 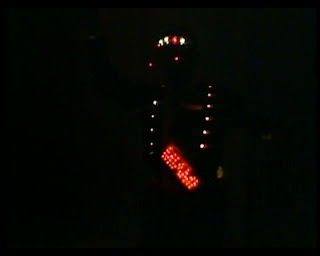 Dim all the lights, sweet darling.
I stand corrected.

This episode is also something of a gift to me. I'm not going to say that I don't love everything about this project, because I do. On the other hand, it's time-consuming, and everybody enjoys a break now and then. Luckily, almost everyone spends the first half of the episode in pajamas, and the second half wearing outfits they've already worn. Let's all appreciate the warm simplicity of a slightly briefer entry.

Since there are some throwaway characters this time around, let's get them out of the way before we move to the main event. 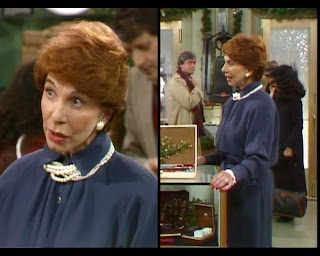 Don't mess with her. She's been playing crabby white ladies
since before you were born.
First up, we have reliable character actress Doris Belack as the slightly brittle department store sales associate. (I loved her in Tootsie and she's popped up in all sorts of places since then.) Her costume is clearly designed to convey a great deal about her character during the moments she has in front of the camera. The bunched pearls, for instance, instantly conjure images of money, while their noose-like choke-hold on her neck reinforces the rigidity of her demeanor. The steely undertone of the blue dress combines well with its almost habit-inspired cut to let you know that she is staunch. She's not bedecked in opulence: this woman is not rich herself, but meant to sell richness to others, and thus is faking it well with classic garments and big jewelry. As an actual look, it's prudish and unflattering, but as a uniform or icon, it serves its purpose admirably.

If this episode has been busier, I wouldn't even have mentioned these people.
On the left is Suzee Pai. After this episode, she had a role in Big Trouble in Little China followed by a couple movies I've never heard of, and then she dropped off the face of the IMDb. She's wearing an ugly maternity dress, as do pretty much all women who enter Dr. Huxtible's office.

Her husband, Tzi Ma, surprised me with the length of his resume. Fans of 24 might recognize him for his recurring role in season 6, but he's done all sorts of stuff, with an apparent core concentration in martial arts flicks. Here, he's depicting a chauvinist husband. The show's writers love exploring macho attitudes and gender equality, as they will do later through Sondra's boyfriend Elvin and then Rudy's friend Kenny aka "Bud." This character, Mr. Lee, actually uses the phrase "barefoot and pregnant" in earnest. I kind of thought he might be an asshole when I saw his hair, and this statement confirmed that suspicion. Otherwise, he's doing OK for a straight dude. The hint of red under the black shirt is a good color scheme: it retains his butchness while remaining a little fun. I also like the collar detailing with the big snaps, but the collar itself is too large. It will either become a mock turtleneck when closed, or splay open like a disco shirt, and I'm not in love with either option. The pseudo-military coat is another nice touch, keeping fashionable even as it overtly broadcasts his preoccupation with masculinity.

OK, now the people we care about. 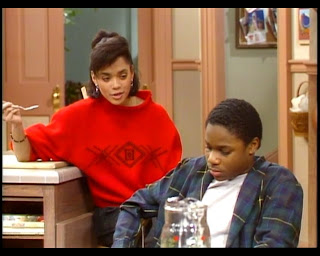 I wouldn't have pegged Denise as a morning person.
Denise is the only person who got dressed this early. Her siblings are all still in robes and pajamas. I'm not complaining; I'm frankly running out of new words to describe their sartorial challenges. Anyway, let's check this sweater. The red is so bright that the camera is almost having trouble capturing it, but I'm not against it. She looks flashy and confident, which is in line with her overall personality. The neckline is a little weird and the volume is nonstandard, but these are things she can get away with as a fun, nonconformist teenager. I'm a little wary of that pattern on the front; I'll agree that something should be done to break up all that red, I'm just not sure it should be that specifically. As for the pants, I was completely convinced that we'd seen them before, but after reviewing every last screencap I've ever taken, I can't find them anywhere. Regardless, they're pretty standard for her, tailored wide up top to a slightly narrower cut at the bottom, with a hem that falls above her ankle. It's a style she's not eager to abandon any time soon, so I'm just going to give it to her. The mottled charcoal looks more linty than patterned, but it's a nice try. Also, I really wanted to approve of her earrings until they were featured in a tight shot. 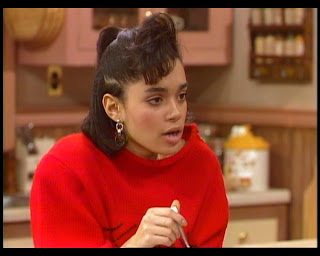 She uses that spoon to apply her blush, too.
The extra loop underneath isn't helping. The black just blends with her hair, and then it becomes this nasty surprise of unexpected jewelry tumor. Know when to say when, Denise. 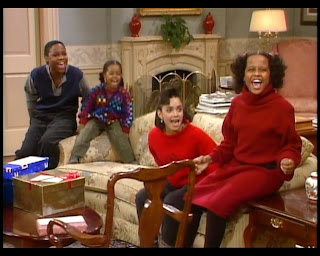 To get this reaction, the producers ran a dangerously high-voltage
current through the living room sofa.
When the other children finally get dressed, they all wear exactly what they wore last week. These episodes must have been filmed on the same day or something; I can't think of another reason to have everyone wear identical outfits two episodes in a row. Maybe the costume department was just feeling lazy. The editors certainly were. 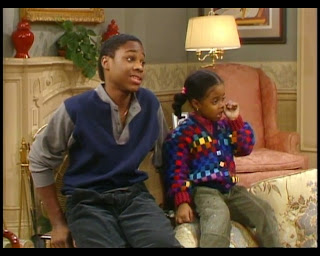 Let us know what you find, Rudy.
Really? That was your best take? Really? 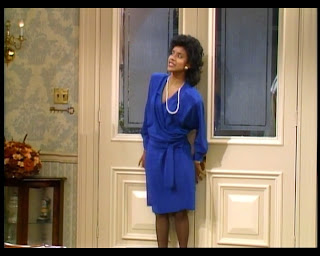 Looking snappy and wrappy.
Clair has firmly re-entrenched herself in her blue period, and I'm on the fence. I'm kind of crazy about this shade of sapphire, but I'm not sure that it's being particularly kind to her. Reviewing previous looks, I think her skin responds better to warmer purples and reds. Her natural glow is diminished here, and it might be the coolness of the garment's tone. Still, the wrapping effect is wonderful; she gets to play with a baggier look in front without sacrificing herself to dumpiness. The fit compliments her without needing to be tight.

How to subdue an angry intruder.
See? It's both sleek and interesting at the same time. That crisscross in the back nails it. Since the dress is monotone, it's well worth it for her to allow that string of pearls hang out across her chest. I'm impressed overall, and on a day with so few highlights, she easily stands out as the lady to beat. 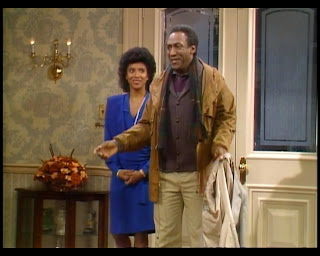 "A whole blog just for me? You shouldn't have."
Cliff has brought back his purple sweater, but it doesn't quite have the magic that it used to. Something about the way he wore it in episode 3 was just so perfect. Buttoning it up and matching it with a darker purple shirt is just a waste. At least he was nice enough to wear his flat-front khakis for us.

And that's all. No, really. There were a couple coats and scarves I overlooked (including a repeat of Clair's amethyst overcoat from episode 9), but outerwear honestly doesn't interest me. This was an episode without much in the way of clothing to critique. Hold out hope for next week. I know how you hang on my every word.
Posted by Unknown at 1:23 PM