I love Denise-centric episodes. She's the most competent actor of all the children, so scenes run a little more smoothly when she's around. Her character is the zany one, so the stories they write for her go a little further out of bounds. Most importantly for the blog: she's the one who knows how to dress. She doesn't appear until later in the episode, though. The first person we see is Vanessa. 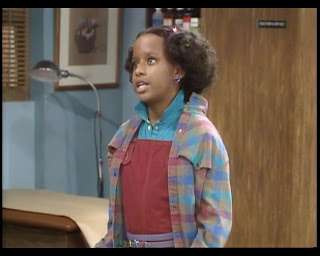 It's too much and yet not enough.
Whoever put this outfit together is trying way too hard. I'm not offended by the various shades or the way they go together, though the effect is surprisingly drab for a look that is so ostensibly colorful. Something about the lavender double belt really grabs me. The rest is sort of regrettable. The overalls with the short straps are too young even for her; they scream preschool. Having one shirt under the overalls and another over them is overkill, and neither shirt is all that attractive. In particular, that outer plaid one has problems: the tan undertone makes everything look murky, and the cowboy-style flaps on the front are distracting. And then both collars are popped. If you know me in real life (and you're reading this, so I have to assume that you do), then you probably know of my utter disdain for the popped collar. It's an affront. Double-barrelling on that kind of look is equivalent to punching me in the eye.

Oh, and we only get one hint regarding the length of Vanessa's skirt: 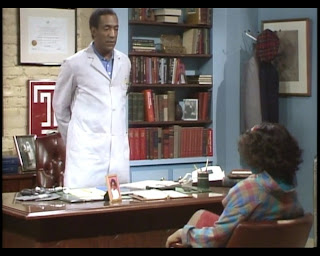 The prognosis for this look is not good.
I'm putting that image here just so I can say I reviewed all aspects of the outfit. Truthfully, it gives us almost no indication of what her jumper actually looks like below the waist. I'm assuming it's boxy overall and that seeing it full-force wouldn't make me hate it less. 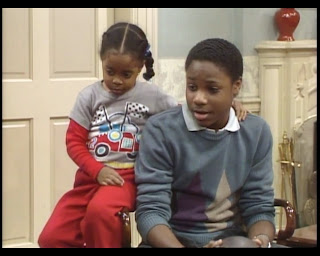 Remember: it doesn't matter what Rudy wears.
Theo throws down a repeat of his look from episode four. I don't have a ton to say except that I've previously voiced my preference for thinner shirts under sweaters. The polo collar looks wrong.

Polo fiasco.
Cliff's look also has a certain toddlerness to it. Having a contrasting band on the cuffs and collar is a nice concept, but the rainbow lacks polish. All the periwinkle and peach just makes it seem like a polo Rudy would wear. I appreciate the yellow horizontal stripe and the olive trousers (which I assume are pleated), but this is kind of a miss for me. While we have them up there, we should also talk about Theo's pants, which are tailored more widely than usual. I'm not sure what drove him to bulkiness; he knows better.

Now, the premise of this episode is that Cliff wants to meet Denise's boyfriend, and to make this happen he organizes a dinner to which formal attire will be worn and children under 16 will not be invited. He even allows Denise to select his clothes for the event. 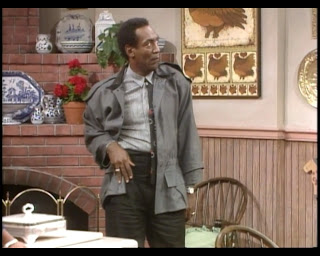 You betta work.
Though this style is overall too young for Cliff (that's the joke, after all), there are some good things happening. Since the coat is in a neutral color, I'm supportive of efforts to make it showier in terms of design. It's a hair busy, but all the extra panels are neatly placed, and the sizing isn't too far off. The blacks and grays keep this whole ensemble feeling clean. Had I designed the tie, I would have used something other than bubbles to bring color in, but I like the flash of brightness. The thin tie is inappropriate for his age bracket, but like I said, we're forgiving that. The pants seem like a solid bet, but there's actually some weirdness going on in back. 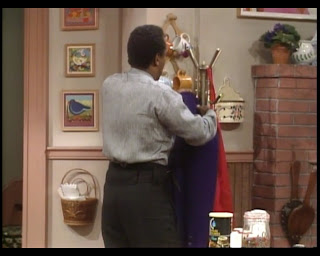 I shouldn't have wasted DAT ASS in the previous entry.
They're riding way high. The waist does not begin directly below the ribs. Bad move. Also, if I'm seeing what I think I'm seeing, then the wide belt is built in, which is pretty tough to defend. I know that Denise is all about the fashion risk, but there's a difference between skydiving and jumping from a plane without a parachute. Worse still, it is specified during the episode that these pieces were purchased for Cliff as Father's Day presents. Come on, now. Be kind to your dad. 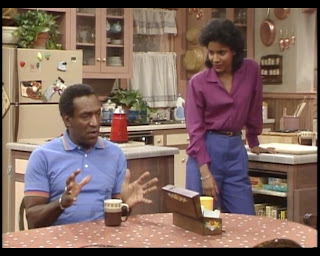 Clair will pose you DOWN.
Clair wore this entire outfit three episodes ago. In some ways, I appreciate the repetition. It's a real-world thing to do. Do you know anyone who wears something different every day? Besides, if she's going to stick to shades of purple, then even a first-time look is already a little tired. Whatever, it's one less paragraph to write. Thanks for letting me phone one in, Cosby Costumers! 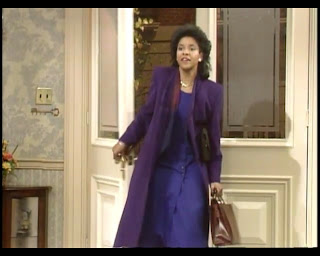 Thanks also for phoning it in with even more of the same shade.
See what I mean? Everything new is just old again. I'll at least applaud her for having a nice overcoat, an item heretofore absent from her wardrobe. 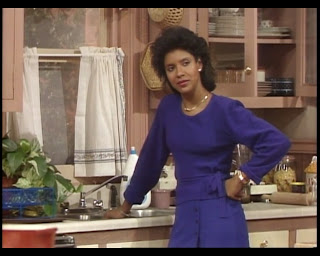 You are not ready for this.
Making no further mention of her desire to think inside the box with regards to color, I'll instead focus on some of the other problems here. Though the tailoring is solid for most of this getup (which I think is two pieces, but is meant to be worn as one particularly fussy dress), those sleeves are all-the-way bad. Starting at the shoulder pad and working down, they're too big to be flattering and yet not big enough to be trying for a droopy hippie vibe like she's done before. That little bow on her waist by her hand is distracting and unnecessary. The buttons up front have an almost Amish vibe, and while I could accept that as an overall aesthetic, I can't really encourage little Puritan pieces on an otherwise unremarkable outfit. Clair, this is not your best work. I'd say you should let Denise dress you too, but she's not always nailing it herself. 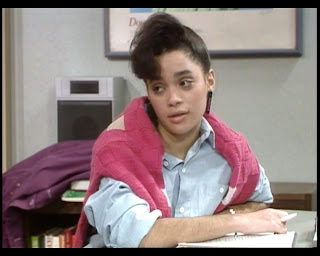 Bangin'.
This is a textbook example of an outfit that looked great when the show aired and now just seems completely wrong. The pastels, the size of the shirt, the way the sweater sleeves are draped over her shoulders; these are choices we are glad have been abandoned to the ravages of time. You have to see this from multiple angles to really grasp how bad it is. For instance, if you think the bangs are bad from the front: you're right. SO BIG. But just check that action from the side. 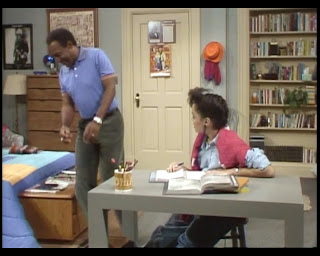 That orange hat in the background is like a looming threat.
It's like she has a sea creature on her head. And while we're taking a new perspective, could you give us one from the back, Denise? 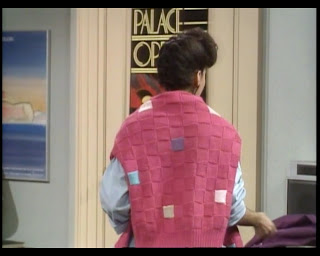 She's going out as a potholder for Halloween.
Yep, that's gross, too. Worse than expected, even. Can you imagine if she were actually wearing this sweater all the way? No, in fact, don't do that. It's too harrowing. Keep your fingers crossed: the dinner party look is coming right up. 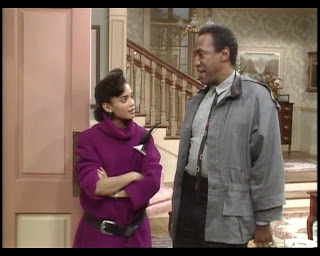 Her efforts to style her family paved the way for The Rachel Zoe Project.
Sometimes she nails it. I've harshed on her potato sack dresses before, but this one is so absurdly large that I have to admit defeat and just enjoy. So much neckline bunching! So much sleeve! So much saggy torso! She's like a big, fashionable beanbag chair. Remember how you loved those as a kid? Who wouldn't want to see one prancing down the runway? (The fashion runway, not the airport runway. This is big enough that it could be mistaken for a vehicular option.) Unlike her mother, she only pulls out the weapons-grade purple for special occasions. She's worn similar belts before, because she knows they work. The feather brooch is preposterous enough to hold its own against this garment. Overall, a solid success. But wait, there's more! 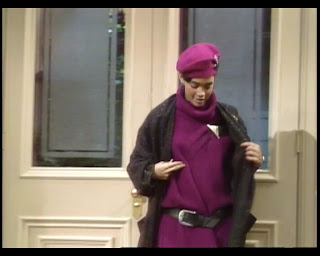 These episodes never end with Denise having had a good date.
I mean, obviously she needed a coat and hat. That sea of wool wasn't going to keep her warm. It's kind of tough to layer with something this big, and the coat ends up looking a little strange as a result. It's got a sort of bathrobe quality to it because it's so widely built and the fabric is so thin. It also reads a little Norma Desmond when paired with the hat (which almost but not quite matches the sweater and we know how I feel about that). It's not actually a turban, but it's shaped like one. I almost wish it were a turban, because that would be a weirder throwback. I do like that the hat is an accessory that has its own accessory, though. Go big or go home.

The only person left, then, is David, the mystery boyfriend.

His head looks a little like a Barack Obama chia pet, but the rest is great.
You knew she'd land someone fine and fashionable. This kid is giving it on every level. Bright hues, assertive patterns, coordination without overt matching. I don't even know where to start! The blazer and tie would feel dressy except that he's having such a huge amount of fun with them. The grass green tweed looks wonderful next to the teal and yellow plaid, and then that palette is shaken up by those rich maroon accessories. The tucked-in tie and yellow-detailed scarf are confident to the point of being brazen. Since everything is singing in such perfect harmony, I have to give him the high-waisted pant: he clearly knows what he's doing. 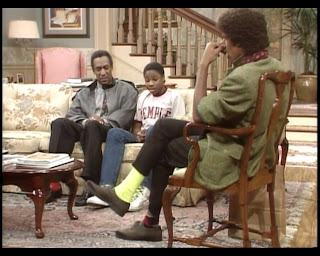 Always practice safe socks.
Since the show makes a point of highlighting (and laughing at) his mismatched socks, I'll bring them up as well. First, let's get this out of the way: Theo wore a second look that I skipped. It's a t-shirt and jeans. The denim is great, the t-shirt is a t-shirt. I don't think much more could be said about it. If you look closely, you can see that of Cliff's socks is bright red, and presumably he matched the pair. Without Denise's input, he never would have gone even that far, so having a different color on each foot surely would have sent him over the edge. I'll admit that David, in his flouting of standards, still managed to make each sock individually complement his overall look, and that's pretty swanky. On the other hand, it's the kind of thing he can only get away with for another couple years. Teenagers can do this. Once you're a grown man and you pull that kind of nonsense, you look like a teenager. That's not something you ever want. People hate teenagers. Right, Clair? 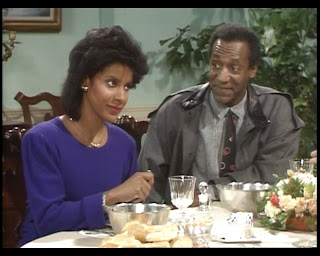 Careful. This is a woman that can kill with a salad fork.
Oh, girl. I better go get to work on episode ten.
Posted by Unknown at 11:19 PM