After babysitting an infant, Clair begins to think she would like another baby. This raises many concerns, and these concerns bring up meta-concerns. For instance, when Denise comments vaguely on her parents being too old for such an undertaking, we're forced to wonder: how old are they supposed to be? In reality, Bill Cosby is nearly eleven years older than the woman playing his wife. In the third season, when Phylicia changes from Ms. Ayers-Allen to Mrs. Rashad, she also becomes visibly pregnant. Later, we can review the many ways in which the wardrobe and props teams work to mask her condition. For now, suffice it to say that Mrs. Huxtable is maybe not supposed to be young enough to have a child, even though the woman cast in the role will soon demonstrate her prowess in this area.

Anyhow: the lady in question.

You know Clair is extreme because she's in tents.
I'm torn. I want to like this getup. There's an almost bohemian feel to the flowy volume she's bringing, balanced by the Martha Stewart levels of yuppiness given off by how the Persian blue pairs with the khaki. In the end, I think the blouse fares better than the trousers do. The extreme billow feels high-fashion yet wearable, and the color is subdued enough that she doesn't appear to be trying too hard. With a more flattering trouser, she'd be all set. If I haven't convinced you with the above screencap that the pants need to be retailored, then check this next one. 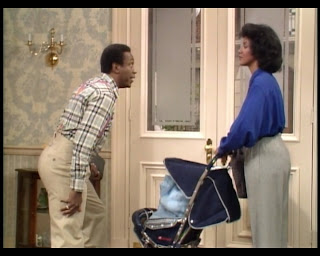 DAT ASS. (Sorry.)
Straight-up tanky. No, ma'am. Also, she later wears a coat that drains all the good from the world. 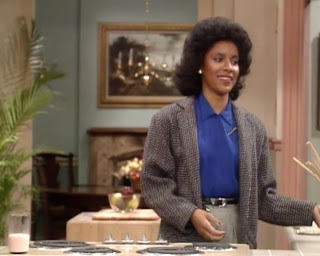 Executive wrongness.
Seriously, if you can't see the giant sleeves, then this shirt is achingly boring. The high neckline makes sense when you're working with a sort of gossamer, too-much-fabric presentation, but now it just looks puritanical. The jacket itself is sort of thick and functional, like something an old man would wear, and not in a good way. I studied several shots of that diagonal pin to try to figure out what it's supposed to be. My best guess is a pen, but it's tough to tell. My advice: get rid of it, because it's doing nothing for the outfit.

Since he's already made an appearance, let's just check Cliff out now. It's a two-day episode, but I'll divide by day rather than by character. We'll see how it goes. Change is good, right? 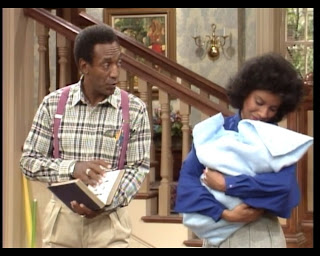 Clair's heart surrenders when Cliff wears suspenders.
It's become clear that pleats are just a fact of life that I'm going to have to get over. Everything is pleated. People just really wanted to make the fronts of their hipbones look extra paunchy in the '80s, presumably for a reason, though I can't think of one. Other than that, this is all working. As with previous outfits, he's not straying outside acceptable Dad norms, but he's playing around with expectations. The black-and-white plaid has a hint of lavender in it, so he grabs some lavender suspenders to kick it up a notch. It's businesslike in a sense, but then the hugeness of the pattern and frivolity of the color make it almost a game. His approach is practically post-modern: "This is what dads wear. Get it?" I get it, Cliff. And I love it. 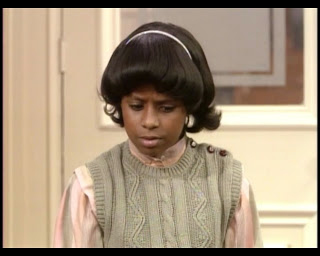 "Why does my hair look like a wig?"
We saw Vanessa earlier, too, so I'll pull her in. She's been doing a lot better in recent episodes. I'm not going to repost the earlier picture, but if you remember (or just look up) you'll see that I wasn't kidding when I said everything is pleated: her skirt has some of the ugliest little mini-bunches I've ever seen. I can get behind a schoolgirl-style, for-real pleated skirt. This is not that. This is a crumpled potato sack. Ignoring everything below the waist, however, I'm going to give this outfit solid marks. I like the subtle striping on the shirt, I enjoy the classic, almost elderly vibe of the gray cable knit sweater vest, and I adore the big, asymmetrical buttons. The matching hair ribbon is a tad young for her, and there's something strange happening with her sleeve at the shoulder (I thought maybe it was a fold that would work itself out, but its presence in other scenes suggests that it is a permanent and intentional, if misguided, feature). Despite these flaws, however, she looks better than usual.

We saw Rudy earlier, too, wearing the episode four romper in a different color scheme. I don't have anything to say about it, really. That leaves Theo and Denise. 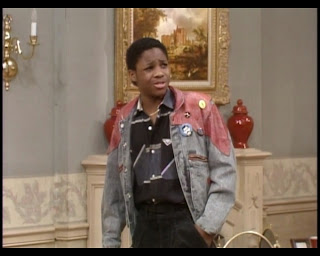 Don't you sass me. You know you're committing fashion atrocities.
Looks like this jacket is going to be a regular feature. Why you do this? Nothing underneath is that great, either, but you'll see it better when we remove a (deeply offensive to my eyes) layer. 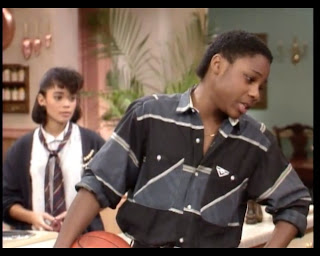 Stand back, Denise. The ugly might be contagious.
Are you seeing this shirt? It's all wrong. Size-wise, it's so jumbo for such a slim guy. The stripes are similarly too huge, and the gray/black/cream palette is thoroughly dull. The diagonal pockets would be interesting if they weren't each as large as iPads and if the whole garment were made from a different fabric. Currently, they just make his chest into a geometric nightmare. Beyond the clothes, I'd like to point out what I fear is the beginning of a mullet on the back of his neck. Let's keep an eye on that. Please think about what you're doing here, Theo.

Don't hide back behind the counter, Denise. Come join the fun. 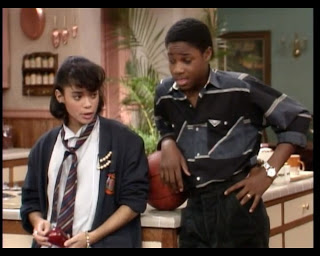 Lisa Bonet showed up to the Hermione Granger auditions a little early.
Her weirdness is coming out to frolic with this one. In another of today's oddly self-referential clothing moments, Denise has gone out dressed in a school uniform, even though her school clearly does not require uniforms. Furthermore, the fact that no one has mentioned class or work suggests that it's not even a school day. I mean, there's an emblem on the blazer. She stole this from a friend who goes somewhere with "Academy" in the name. The apple elevates things to costume-grade irony. She's stunt dressing. The best part is that it ends up being a fantastic look. I love the juxtaposition of formal attire worn sloppily. I'm fond of the unconventional pearl pins on her lapel. The stripes on the tie are fun. But wait: there's more! 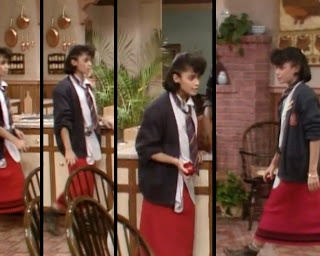 Now prance. Prance, girl!
I tried really hard to get a good screencap, but we're working with images of a moving target filmed 30 years ago and then streamed over the internet to my computer. The resulting quality is unimpressive, but I did my best and compiled as many decent shots as I could. Anyway, this skirt continues the theme while injecting a shock of interest with that fire-engine red. The stripes are great, and the just-above-the-ankle length is right when you're wearing ankle boots. I'm also digging the way the shirt is untucked and belted. Normally I'm a little harsh on Denise when she goes for her large, slovenly ensembles, but this one gets it right. Our little girl's growing up!
Until tomorrow, that is. 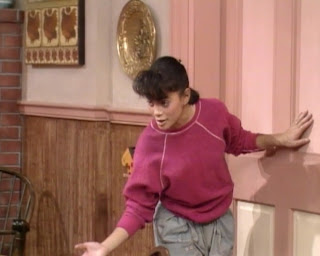 TA-DAAAAH!
We've seen these pants twice before. They may be her favorites, but they are not mine. I can't even recommend setting fire to them because I feel like that fabric would smell like the devil's armpit when burned. I'm also against sweatsuits as a concept. This rich pink looks fabulous on her and the contrast stitching is wonderful, but why not just a long-sleeved tee? Is this that much more comfortable? Don't give up just because it's Sunday and you're not going anywhere. You shouldn't even own this. And she's not even the worst offender! 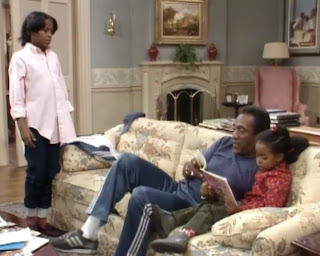 Shoes in the house and feet on the table? Were you raised in a barn?
That's right: Vanessa brought back the jeans with the sweatpant cuffs. I can't even. She's headed in the right direction with the shirt, but it's too long to be worn untucked. It looks like a smock or something. If she walked into her middle school looking like this, they'd assume she was the new art teacher. I'll mention Rudy only to say that it's tough to go wrong when dressing a child that precious. Cliff's look right now is kind of offensive. I get that he's going casual, but it bothers me greatly that his t-shirt almost matches his track pants. Almost. It's viscerally hurtful to me. Get it right or just go for a different color altogether. He brings it back later by making a fuller effort at coordination. 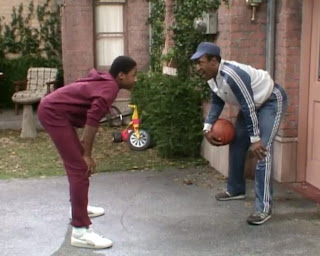 Sweating with the oldie.
Not to belabor the irony theme, but this seems like another look intended to highlight itself. He should just be wearing a sandwich board that says, "I'm an old man playing basketball." Nobody wearing a conductor's cap on top of a striped track suit could be serious about their outfit.
Theo is wearing a maroon sweatsuit. That is all that can be said.
While the men do man things in the backyard (and where in New York are they that they have one of those, by the way?), women sit in the kitchen and talk about BABIES! Oh, and yes, multiple women: this episode introduces Ethel Ayler as Clair's mother Carrie.

Yo mama so purple...
Clair loves her some raspberry. It looks great on her, so I understand why, but it wouldn't hurt to think outside the box a little. If she showed up in something jewel-toned, like maybe a nice emerald top, I bet she'd look fierce. I shouldn't bother with such questions, though, because she's close to flawless here. The wrap dress is flattering and hits a nice midpoint between dressed up and dressed down, while the boots add a splash of sexy fun. I wouldn't say no to a brighter belt or some other accessory to break up the monochrome, but sometimes less is more.
Mrs. Hanks is also giving some good purple with that eggplant jacket. It complements her skin tone nicely, though I worry that it's a bit dark to be worn with a black skirt. I'm happier with the outfit sans blazer. 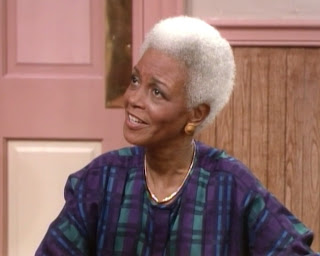 You don't need Botox when you've got class.
Plaid is another constant around here. If someone ever shows up wearing a black-and-blue plaid pleated onesie with the sleeves rolled up, I'm going to implode. To erase that terror from our minds, let's focus on the tasteful elegance of Carrie's top. She's wearing color proudly. Go on, you. Still, the fit isn't great: I'm having a hard time locating a shoulder, for instance. The same problem exists with her bust, and while a corset-tight silhouette might not be best for an older woman, she probably shouldn't allow for the assumption that her nipples might be down around her navel. Also, the fleshiness of that earring makes it look like a mushroom or a growth rather than a piece of jewelry. So there's goodness here, but I wouldn't say that her choices are overall good.
And that concludes episode seven. Clair rightly decides that five children is plenty. If nothing else, I'm relived because reviewing another character's clothes would make these entries take even longer to write! Not that I don't enjoy my job. (And by job, I mean hobby.) I'm really looking forward to continuing this project. Blogging about the Huxtables makes me happy. How happy? THIS HAPPY: 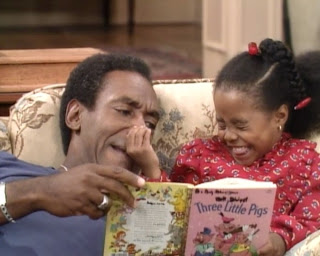