All the action today takes place over the course of an hour or two, so we only get one outfit per character. No one outside the family appears, though we are treated to the notable first appearance of Earle Hyman as Cliff's father Russell. This is also the first of many times that we hear family members pressuring the children to attend Hillman College, the fictional alma matter of two generations of Huxtable men. Today, Denise is her grandfather's lucky target. Thus, she'll also be mine.

I can see it in her eyes. She knows I'm going to harsh on her sweater.
To be fair, she wasn't expecting company. She was up in her room, peacefully reading all by herself, when Cliff busted in and informed her that she'd have to sit through her grandpa's harangue about where to go to school. If I were spending a day in, I wouldn't necessarily knock it out of the park with my outfit, either. This rich blue works for her (much better than the shade of the infamous date-with-Robert dress from episode three). The sweater is large, but in a way that could be construed as intentional. I can't endorse it entirely, of course, because it is covered in Lucky Charms. The shapes are plain old ugly in every way. In terms of accessories, she's wearing the same earrings as last week, but with a new red disc underneath each swirl. It's a move I feel alright about, but one clearly aimed at coordinating with that depressing hair clip. Taking all factors into consideration, I'm giving top honors to those jeans. The wash is completely out of whack with everything else she has on, but a good slim denim is always nice to have around. She'll be able to wear them with another (hopefully improved) look some other time.
As you can see from the screencap, Cliff was also planning on a lazy day. In fact, much dialogue is devoted to his desire for a nap. 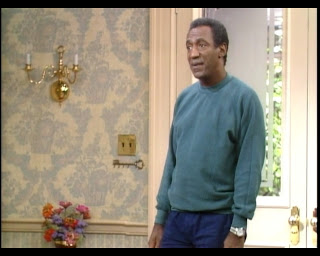 "Why are you picking on me? It's my day off!"
He looks good in hunter green, but really I don't know what you'd like me to say about a sweatsuit. This is a half-step up from pajamas. Moving on. 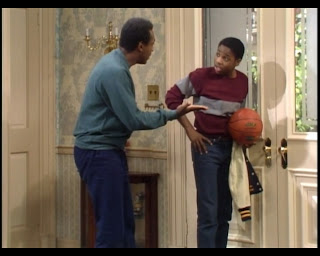 This whole family is throwing stankface.
Theo can usually be counted on to bring it, but after setting the bar so high last week, he was bound to underwhelm today. There's nothing wrong with what he's got on, mind you. The colors all work together, the jeans fit well, the top (it's either a heavy long-sleeved t-shirt or a light sweater, I'm unclear on which) is completely acceptable. I'm a fan of the letterman jacket, even if we never see it on. He looks like a clean-cut dude. It's not a bad aesthetic, it's just not the kind of thing that gives me material. Come on, Huxtable clan. Don't let me down. Forget y'all, I'm checking in with the new kid.

You don't have to get serious, Earl. You and I are good.
See, Grandpa Russell dressed it up today because he knew he'd be leaving the house. I'm pretty happy with his selections. A man of his generation doesn't get a lot of leeway in terms of the fashion risks available to him. The same stylings for which Theo is praised would only earn Russell ridicule. He knows the parameters, and he works within them. The tweed coat is classic; it would have looked as sharp in his youth as it does today. The khaki pants are a fine choice; they could stand to be a shade lighter to contrast with the jacket more sharply, but they're not wrong. His shirt is the clincher, though. The warmth of those pastels and the chunkiness of the plaid really breathe life into the other pieces. Comparing this colorful pattern with one of Cliff's similar but more monochromatic earlier ensembles, you can see how important the choice truly is. I also like that the top button is buttoned, giving the suggestion of a tie even when one is not present. It lets you know that he is drifting slightly into the casual realm, but not about to let go of formality completely.
Leaving the house seems to be the key to fashion success in this family. Clair took Rudy and Vanessa to get new shoes today, and the three of them turned it out. 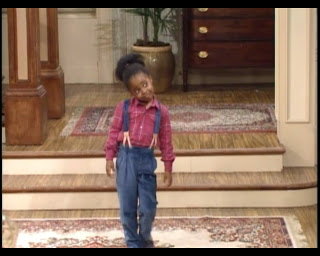 SASSAFRASS.
Instead of writing affirmations on my mirror, I'm going to print out this picture and hang it on the door to my apartment. Every time I step out into the world, I should do it like Rudy does. You can't try to tell her she's not fabulous. When your confidence is this strong, it doesn't matter what you're wearing. Of course, if you happen to be wearing the world's most adorable giant suspenders, then more power to you.

We're getting a little muppety with that coat, hon.
Clair wore this shirt last week, but it's tough to question the repetition. The hue is just right for her, the tailoring compliments her form, and the style is slightly dressy without looking ostentatious. As a separate piece, I think the pant could work: high-waisted and flowy, in a fun periwinkle, it has a sort of zoot suit, vintage vibe. Together, though, I don't like those colors. She's trying to make it happen by throwing on a coat that incorporates both shades, plus a couple others, but I remain unconvinced by the effort. She's better off without the jacket, which gives off a sad cat lady vibe and masks the hourglass shape that the rest of her outfit works so hard to accentuate. Mention should be made of that thin brown belt, which is a good accessory to have around, even if it looks a little wonky next to the paleness of the trousers. If those were cream slacks in the same cut and material, I'd be happier.

Sorry for picking on you so much, Vanessa. In fairness, I'm usually justified.
Vanessa, ever the dark horse of this blog's runway competition, pulls out a surprise success with her prep school realness this week. The look is particularly impressive with the gray sweater still on (I wish she had worn it for longer so I could have gotten a clear shot), but even without it, I think she's got something good going. The sea of red would be ill-advised if she were just pairing the plaid shirt with the sweater vest. Similarly, a banana-colored tie typically won't get a lot of mileage. But two wrongs can often make a right where clothes are concerned, and this combo is a perfect example. A basic black pant is a strong option when you're going crazy with the top half of your outfit. Greatness has been achieved, Vanessa. Be proud.
I also want to comment on a couple more things about the above two images. First, while I'm pleased with Vanessa's hairstyle, I also realize that there are a lot of problems with encouraging a black woman (or a black preteen, in this case) to commit to a lifetime of expensive and potentially damaging straighters, weaves, and other scalp-tormenting products, all to turn her naturally beautiful tresses into the straight locks approved of by the dominant racial forces of which she will never be a part. So I'll say only that I approve of a new hairdo, without specifically choosing this one. There are lots of styling options that don't require me to take another cultural studies class for this blog to continue.
On a less serious note, Rudy's tiny little blazer is just perfect.
OK, another day, another dollar. (Only without the dollar, since no one would ever pay me to write this.) Thanks for checking in. See you at episode seven.
Posted by Unknown at 3:48 PM