Here we go again, darlings. In today's half-hour, Clair takes Theo to see a suspenseful, gory movie. Vanessa is desperate to see it as well, and goes even when her parents forbid her. She subsequently has terrible nightmares, just like they told her she would, and begs to spend the night in their bed. Since so much of the story revolves around sleep (or lack thereof), a whole lot of pajama happens. The show in general is heavy on pajamas and robes, particularly for Cliff and Clair. We see them flirting in bed a lot. Take it easy, you two: five kids is plenty. Anyway, the point is that I have absolutely no interest in critiquing bedtime attire, so I'm letting you know right now that anything of that nature will be ignored in this blog. Seriously, it'd be boring for all of us. 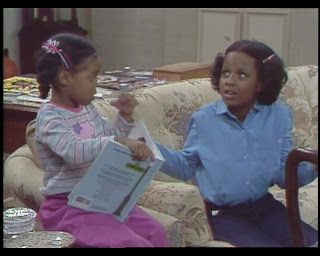 Rudy's all, "Those barrettes are bullshit. Check my ribbons, fool."
You don't need to shrug to tell us that you don't know. That blouse says so all by itself. The color isn't so bad, but the bunching of the stitch at the shoulders makes it seem home-sewn, and the shirt otherwise appears to have been constructed for a very small bank teller. While she's sitting down, those jeans look fine (good, even), but when she stands up, they tell a very different story. 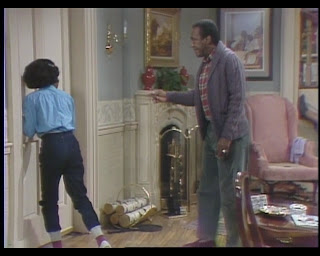 There's a certain unfortunate congruence of shape between
the back of her hairdo and her ass.
I'm all for a high-waisted pant, but this is the absolute wrong way to do that. When you're older and want to rock a vintage look, then great, make it happen. But by combining a waist that high with tight, shortened legs, she just gives the overall  impression that her jeans don't fit. Also, are those gray cuffs made out of some sort of stretch cotton? Don't do that. I'm liking the playful flash of magenta coming from the socks, but nothing else here is working. Well, tomorrow is a new day.

When afraid for your life, wear something you'd be proud to die in.
Terror apparently brings out the best in Vanessa. She must have used the hours normally devoted to sleep to plan an outfit. The presence of all three primary colors on top gives this a sort of grade school feel, which makes sense for a girl in sixth grade. Pairing the bright plaid shirt with the gray-on-black argyle knee socks is daring, but it pays off as far as I'm concerned. I can't tell, but it looks like there might be detailing on her shoes, which could well be really cute. The skirt is a hair short, and I can't really tell if it's charcoal or navy (I'm going to give her the benefit of the doubt and say charcoal), but overall she looks like the kind of bitch who makes classmates jealous. They wish they had her swagger.
Oh, and since we saw Rudy in both sets of screencaps just now, let's get her out of the way. AWWWWWW, SO ADORABLE! And that's about enough of that.
Cliff was also in those shots, so let's take a closer look at him.

"Let me make a quick call to Jeanne at the Quacker Factory
to see if she has more of these quality knits in stock."
This first look is kind of a home run in my book. In the same way that Vanessa is taking the schoolgirl thing and making it her own, Cliff is using the boundaries of 40-something dadness to his advantage. The red plaid shirt and gray cords are solid on their own; not revolutionary, but neither boring nor inappropriate. His real genius is in that lilac sweater, though. Typically, a bulky, light purple knit would seem more at home in Dorothy Zbornak's wardrobe. But matched with a sort of lumberjack-y flannel, it suddenly makes perfect sense on a middle-aged man. A surprising amount of thought and skill were involved in this decision, I think. That sweater looks easy, but it's secretly an epic fashion win. Sadly, day two shows less spark. 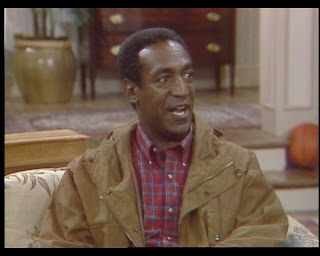 "I'll show you a pudding face."
It's basically a less adventurous version of yesterday. There's nothing I can say about the jacket, the shirt, the pants that aren't even worth a separate screencap (scroll upward if you want to confirm that they're mundane khakis)... it's all just sort of there. A broader observation: lots of plaid was worn in this episode for some reason.
You know who doesn't wear plaid? Clair Huxtable, that's who. 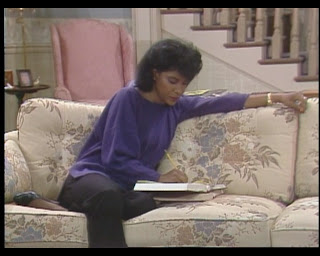 Like a boss.
I'm starting off with her second outfit because it offends me less. Neither option is particularly appealing, but I can't pretend that they didn't happen. To get going on a positive note, I'll say that the color is good on her. She knows it, too, because she wore a similar shade yesterday. The shoes are tasteful but bland, and the pants are purely functional. What really gets me is the size of that blouse. Look at where the shoulder seam is relative to her actual shoulder. There's more than six inches of difference there. I know that she's just lounging, but how much extra room could she possibly need? Yesterday she tried harder, but didn't necessarily succeed harder. 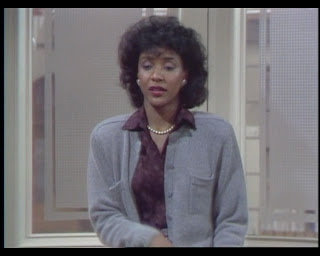 Oh no she did not care for that film.
When she got dressed this morning, she had the best of intentions. She grabbed that winy shirt with the gold pattern, threw on some classic pearls and a dark lipstick, and said to herself, "Why yes, I am fierce." Unfortunately, she got lost after that point. 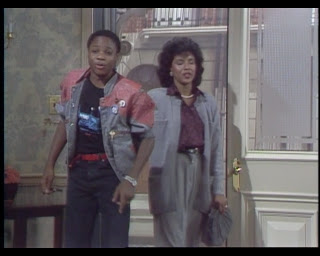 Her purse is heavy with shame.
Where to even begin? Her belt seems to be placed just above the bottom of her rib cage. Those slacks are aggressively pleated. The sweater's shoulder pads are out of control. The two grays don't actually match, but they're close enough that they're possibly trying to. Come back to us, Clair! We want you to live! I can't stand to watch this happen to one of my favorite people. Let's just move on to Theo before I succumb to tears. 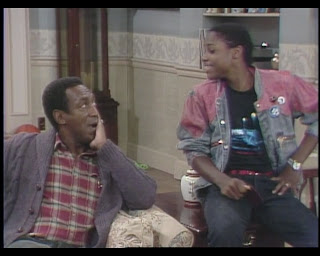 There's no reason to be smug, son.
Here we have one of the rare instances in which Theo's clothes would look foolish in a modern context. He doesn't look bad for the '80s, and there are a couple details like the buttons and the red belt that I can endorse, but the jacket and t-shirt have not stood the test of time. Things aren't getting any better for him tomorrow, either. 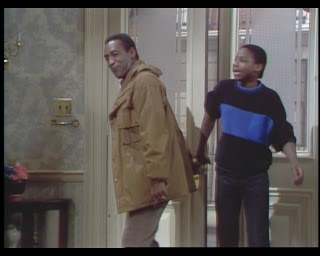 This capture is blurry out of sheer mercy.
Here, he looks most like a modern Brooklyn resident in that he is wearing the same jeans he wore yesterday. I'm tempted not to even acknowledge that sweater, but I'd hate for you to think that I'd made some sort of oversight. But really, the less said about it the better. I hate the black-and-blue pairing, the fit is all wrong, and why oh why did we go years at a time without letting our sleeves reach our wrists? It's OK to cover your whole arm, people.
Last but not least, we have our favorite sartorial renegade, Denise.

Oh my God, shoes.
Day One is a mixed bag. The red and light gray work nicely together, though a pattern or flourish or something to break the two solids would have been nice. The sneakers are fun. Retro enthusiasts would totally pay $150 for them at TopShop or something. I'm unhappy with the sloppy fit of her shirt, but my real concerns are saved for those pants. As usual, she's left room for an entire extra person in her outfit. You can't see it in the images above, but she's also rocking the drawstring again, which we know I hate. Also: Denise, could you give me a facial expression that you think might sum up my thoughts about your hair? 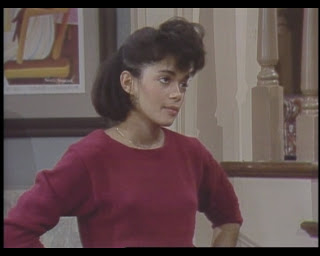 She has had Jennifer Lopez enough.
Good job. So, I hear you had an unsuccessful date with Robert. I hope none of his disinterest could be attributed to your ridiculous dress.

You should have done like your siblings and gone to the movies.
It's dark there.
Oh, hon. To be fair, that color would be awesome on someone else. Denise should probably avoid it, though, because it makes her look washed out. There's an argument to be made for the sparkly, low-slung belt and matching oversized bracelet. If the overall look were better, I'd probably let them slide. It's clear from the small battalion of pink aircraft on her chest, however, that her license to accessorize should be revoked. She's also making the same mistake that Theo made earlier in assuming that cerulean is best paired with lots and lots of black. Perhaps colorblindness runs in the family? Lastly: as expected, her hair has changed but not improved.
It's fun to watch the patterns starting to form; I hope you're enjoying the exploration as much as I am. See you next week for another look at the televised garments that probably had a subconscious impact on what you're wearing right now. (Check yourself.)
Posted by Unknown at 7:45 PM