This is a good episode because everyone gets a costume change (Clair gets two). Cliff forces the family to hold a funeral for Rudy's fish, Lamont; thus, we're treated to everyday wear, plus whatever each person thinks is appropriate for a memorial service held in a bathroom. SPOILER ALERT: Denise wears something bonkers. OK, let's dig in. We've got a lot to get through. 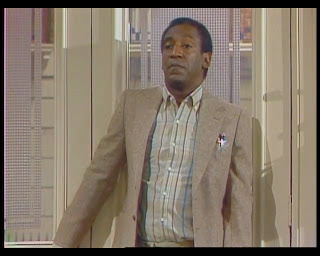 It's the Jennifer Aniston of outfits.

Again with the sea of beige on him. Separately, the shirt, blazer, and pants are all quality items, but who in the world would put them together? Would it kill you to wear a bold hue somewhere? And no, those pens in your pocket do not count. In fact, it's sad that I even had to consider them while searching desperately for color in this shot. You'd better bring it to the ballroom later, sir. 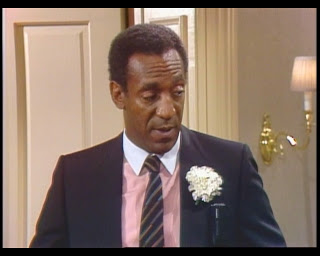 I know you're not laughing at the cabbage-sized tumor
growing out of my lapel.

OK, now we're getting somewhere. The two-toned stripe on the tie isn't really my cup of tea, but I like that he's trying something different. And the pink shirt with the white collar I can totally get behind. Considering that he's attending an event that calls for muted black clothing, this look is basically equivalent to a red wedding dress. The boutonnierre is ostentatious in my opinion, but he's so far outside his comfort zone of off-whites and eggshells that I'm just going to give it to him. (Also, thumbs up to whoever thought to include the beeper in his lapel pocket. OBSTETRIC REALNESS.)

Since she's already been mentioned, let's check in with Denise. I hope she's wearing triple the yardage necessary to actually cover her body! 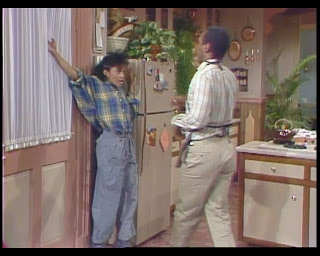 "MY WINGSPAN IS MIGHTY!"

So far so good! Seriously, I want to cut that shirt down and make it into two identical, reasonably sized garments. The bold plaid is fun, even if those colors do nothing for her. I also don't know that I'd pair them with that light gray pant, but it's not offensive. Speaking of those pants, though: drawstrings should be reserved for athletic shorts and pajamas. Get an actual belt. Also: is that a flash of lilac I see at the bottom of the screen? Are your socks and/or sneakers lavender? Because that does not at all work with the other things you have on. No no no. I'm so thrown by that idea that I'm not even going to berate you for your hairstyle. Luckily, I suspect that you're going to be all rebellious and teenager-y in act two. 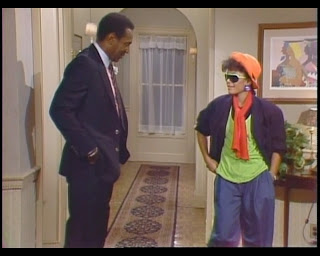 Welcome to the future, old man.

There it is! This is the kind of ensemble that happens when you send one of your interns to find out what the kids are wearing these days, and she opens up two magazines, gets bored, and is just like, "It's all huge and neon! They roll up the sleeves of their blazers!" The look actually ends up being really appropriate in a show about parents not understanding teenagers. Essentially, Denise is wearing the older generation's worst nightmare. It doesn't have to be attractive or stylish (which is just as well, because it's neither of those things): it just has to shock anyone above the age of 35 in the viewing audience. If you think I'm exaggerating, consider what happens when she removes her sunglasses: Her face is more of a palette than a canvas.

I can't call that anything other than straight-up trolling. It looks like she let Rudy finger paint her face. No one would ever realistically put on make-up like that. If she went to all that trouble to make her lips look nice, she wouldn't honestly splatter her eyes like Pollack. Whatever, go listen to Depeche Mode in a basement with your weirdo friends, Denise. Moving on.

Let's do Vanessa next, mostly to get her out of the way. Seriously, that child is dull.

Maybe he wears all those light earth tones to blend in with the couch.

I stand corrected! I included the post-funeral shot just for completeness' sake. It's a gag, but kind of a funny one: the leotard is the only black outfit she owns. It's kind of awful to make a child wear something skin-tight on television, but she's maybe just young enough that she's not yet completely crippled by adolescent insecurities. If they had asked her to do this two years later, she would have burst into flame. Jumping backward, though, I'm pretty into those fuchsia slacks. The sweater is fine; she's 11, who cares what she puts on, really? But those pants are bangin'. Gold star, Vanessa. 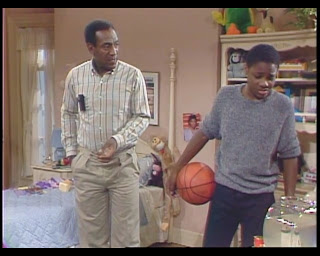 People in this household are really into rolling up their sleeves.

There's really not a lot to say here, other than, "Why were you playing basketball in a full-on wool sweater?" As fashion choices go, he's dressed like a teenage boy. The gray top half is nothing to write home about, and the dark jeans, while certainly a wise choice, aren't exactly life-altering. Still, this is another example of a Theo outfit that someone could unquestionably wear today. (I'll admit that this screencap is a little forgiving in that it obscures his enormous gold watch and the matching gold chain around his neck. I prefer to remember him without his bridge-and-tunnel accessories.) 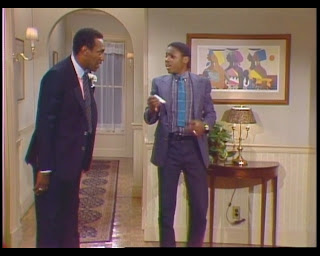 This is what the Old Spice guy wore to prom.

The memorial service is where Theo really shines, though. Pairing the same jeans from earlier with some new pieces, he pulls together quite a look. You'll have to take my word for it, because this shot doesn't really show you, but that blazer is honest-to-Jesus corduroy, and I want it. I would wear that coat everywhere. The tie is a little short, but it's a good color, and the pattern-on-pattern with the shirt is some next-level business. Kudos all around.

And now for the main event: sweet, sweet Clair. We first get a glimpse of her when she arrives home from work.

No caption could do her justice.

Since this outfit doesn't get a ton of screen time, I'm not 100% sure what's going on under that jacket. However, my unending love for this woman compels me to give her the benefit of the doubt. As long as we're talking about the coat: meh. The shade of brown is a little drab, the cut is too boxy, and the shoulder pads need to go. Underneath it, though, there seems to be a pretty bold shirt dress in hiding. The big stripes are catchy, the colors work for her, and the knee length is office-appropriate while still showing a hint of sass. Plus, judging by the placement of that belt, it's probably a flattering fit. I'm even kind of feeling the big gold jewelry. Once unveiled, this is probably the best look in the whole episode. Sadly, she never removes the overcoat, so we may always have to wonder. 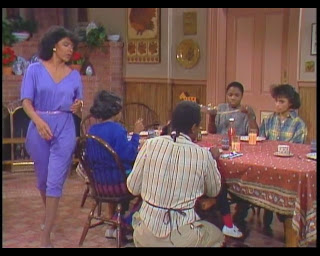 Well, Clair can't very well wear her work clothes all day, can she? Practicality demands that we withstand this romper situation. It's not all bad. I like that she's not backing away from all that purple. Hell, she's even going to taunt us with an almost-matching belt. (Almost.) And I'm sort of into the way that the bagginess around her hips actually makes her look bigger than she is. The unflatteringness goes nearly full circle and becomes flattering again. Still, I have an overall aversion to onesies, and I question why a woman supposedly going for comfort would still be wearing pantyhose and heels. Then again: 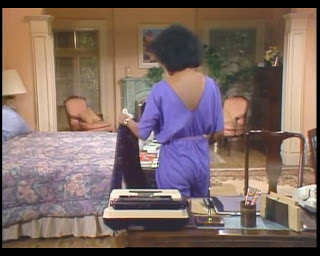 Go ahead, Mrs. Huxtable. Even so, this is something of a wash for me. Can she win me back with her somber black? 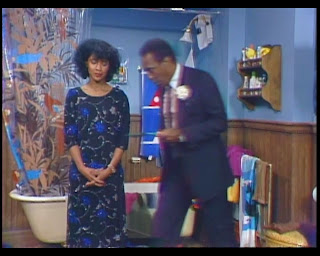 Maybe it would be better if we didn't look.

She cannot. That dress is a study in wrongness. The neckline is misguided, the pattern is upholstry-like, the sparkles are geriatric, the blue is offensive, the sleeve length is moronic, the lower half is dumpy... What in the world possessed her to buy such a thing? After we flush the fish, we're cremating that horror frock.

Before we close, let's give Rudy some love. She did lose a pet, after all.

OMG I want to pinch her cheeks.

Like I've said before, there's not a ton to examine about this girl. She's adorable. That's her job and she does it well. I will say that having her wear a sailor dress was kind of hilarious. It tickles me that Rudy felt the event should have a nautical theme.

And that concludes our second episode. I hope you're loving the Huxtables as much as I am. We're all learning a lot, I feel. Stick with me and let's see where this goes.