The pilot presentation is an interesting case. On the one hand, it's our introduction to the Huxtable family, establishing their individual personalities and styles. On the other hand, it contains a number of non-canon elements that are abandoned by the second episode. For instance, Heathcliff is listed as "Clifford" in the show's establishing shot, and explicit reference is made to the family having four children. (A better choice, in my opinion. I have no great love for Sondra, but we'll save that for an entry in which she actually appears.) Nonetheless, there's no better place to begin than at the beginning, so away we go. 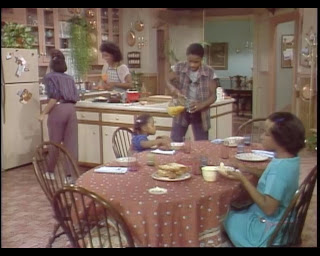 It's a school day, meaning that they woke up at roughly 3:00am to
make sure they had enough time for the jam session.

This is our first glimpse into the family's dynamic. The kids are eating breakfast together and dancing; Mom is at the stove cooking eggs. I'm going to examine people one at a time to look at how the seeds of each character's fashion sense are planted. I'm ignoring Rudy for this post (and probably in many entries) because she's adorable and she's dressed adorably and that's generally all I have to say about her.

Let's start with Clair, who should basically have an entire blog dedicated to her separately. I'm obsessed with Phylicia Rashad (or Ayers-Allen, as she will be known until season 3). She is phenomenally talented, not to mention strikingly beautiful. When I was a young boy, I wanted very badly to grow up to be Mrs. Huxtable. Since this skinny white child was never going to turn into a strong black woman, the closest I got was becoming a fierce gay dude. I'm pretty happy with the outcome overall. But enough about me. Back to her. 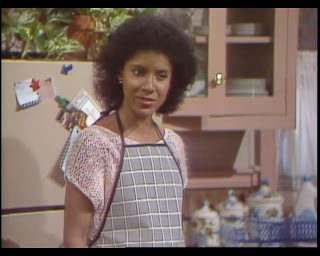 This is not the face of a woman who appreciates backtalk.

A lot of the choices in this episode make me think that Clair went through serious rewrites before the series got picked up. I know from my obsessive research that she was Dominican in early drafts of the script (as evidenced by a partially-en-español tirade she launches at one of her children later), and I'm guessing from the way she's portrayed overall that they assumed she was a stay-at-home mom. I mean, just look at the frayed chenille mess they threw her in. It looks like it used to be a color and is now just faded into oblivion. Also, she wears that apron for the whole episode. Never takes it off. She cooks for maybe ten seconds; the rest of the time she's just covering as much of that embarrassing top as she can. Though I will say: 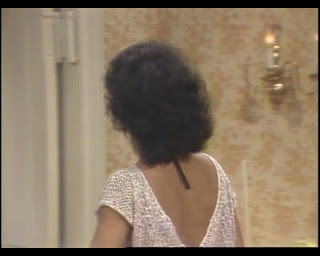 A work of art should be viewed from all angles.

She is quite literally bringing sexy back. Go ahead, Mrs. Huxtable.

In comes Cliff, looking a little more L. L. Bean than usual. Just think: if the makers of the pilot had gotten their way, we would never have acquired our rich cultural legacy of Cosby sweaters. 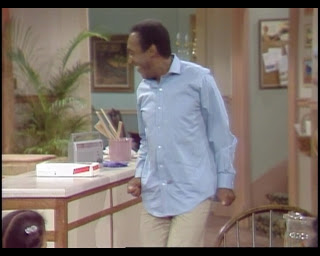 Tuck it in. What are you, a farmer?

Denise is asserted early on as the member of the clan most likely to take a risk with her clothing. The costume department clearly has a good time with her, and I often appreciate their efforts. She gets three outfits this episode, and they're all worth exploring.

None of these children bear any resemblance to their parents.
Are they all Cliff's?

Apologies for the kind of derpy screencaps. She was shimmying around and it was filmed in the '80s. First of all, let's talk about the silhouette here, which is just insane. Baggy stuff was a big deal back then, and all of the kids have their forays into parachute-sized clothing, but Denise gets the ball rolling with a shirt that is too big for her father and a pant with a waistline that I can't even fathom. Look at the image on the right. Do you see how much tapering has to happen by the time we reach her ankle? Also, it's pleated, to allow for more fabric around her midsection. I will say that her choice of a metallic belt is pretty sweet, and though they're too blurred to make out, I have faith that her chunky earrings are awesome. On the other hand, the color pairing of the pants and shirt is a little matchy-matchy, and the Old Country Buffet hairdo is unacceptable. It's OK, she's got a date tonight, so she has to change.

"You can't tell me to change clothes, you're not even my real dad!"

There's a lot going on here. I don't know if you can see in the full-length shot, but she has a couple black bands wrapped around her legs at odd intervals just to mix up the swath of white fabric we'd otherwise be seeing. Not anything I'd wear, but from the waist down I'm approving. It's interesting. She gets bonus points for the pink socks and strappy flats. Up top, though, Denise and I need to have a talk. I initially thought that the top was a windbreaker based on the fabric and cut, but seeing as she's wearing nothing underneath it and is holding a jacket in her arm, I'm going to go ahead and call it just a mess of a blouse. This entry is already too long to unpack the cultural appropriation involved in those earrings, but suffice it to say I have reservations. (Too soon?) And again with the mom hair! Luckily, Cliff asks her to change into something looser.

If she gets pregnant tonight, at least she can keep wearing this dress
for the next nine months.

I could totally get behind this dress if it were even remotely in her size. The color is fun, and I like that it's made from a really stiff fabric; like, this isn't some fancy silk deal, this is a work shirt. This is a dress for a woman in a factory. Unfortunately, the factory worker she stole it from was obese, and the belt, in addition to being too low on her body, is doing absolutely zero to give her shape. Quite the contrary, it's making a false gut and a crotch-level bulge that's going to force her date to ponder some difficult questions. The one-sided make-up is part of a punchline for Cliff, so I'm taking it with a grain of salt. This isn't the kind of thing that Denise ever does again; it's just one of those kids-are-crazy moments thrown in to make the parents laugh. Don't worry, Mr. Huxtable, we all disapprove. Worse than asymmetrical contouring, though: Mom hair. Cracker Barrel cosplay will not fly, little miss. Fix it.

Oh, and while we have that screencap there, let's point out that Cliff did tuck in his shirt and even don a sweater (though nothing as loud as you might expect). His whole ensemble is a little monochromatic for my taste, but it's a good, conservative look that fits with his age and income bracket.

Alright, let's get Vanessa out of the way. 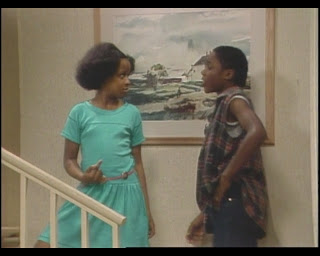 I like to think that Phylicia Rashad coached her on this face.

I'm just going to assume that she's going upstairs to do something with that mop on her head. Brush it, braid it, barrette it, something. The dress is cute, though. Teal isn't a bad color on her, which is a lucky break for a child in the '80s. The belt is fine. It's tough to grade the stylings of a pre-teen with any seriousness. Unless it's really right or really wrong, it's basically just not worth mentioning.

Theo, on the other hand, has some choice moments. He's half the reason I started this project. 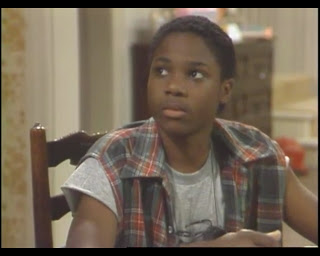 The only thing this boy is guilty of is pizzazz.

There are better examples later in the series, but even here you can sort of see how Theo makes some clothing choices that wouldn't be out of place in later decades. I mean, this is a dead-on scoop of the grunge action happening in the '90s, but a look like this wouldn't be out of place today. These layers could easily make an appearance atop a fixie zooming through Prospect Park.

Well, that about wraps up the pilot. Next time, you'll see what revisions were made once the network ordered a full season of Huxtable goodness. I'm aiming to bang out at least one of these suckers a week. Stay tuned.
Posted by Unknown at 6:34 PM